Currently playing their second innings in the Indian market, Chinese owned Italian brand Benelli has already launched two new motorcycles. They started with the hottest segment in the market right now, with the TRK 502 Adventure Tourer and followed it with the Leoncino 500 scrambler. The next motorcycle from this brand will be in a segment currently ruled by Royal Enfield, with Jawa trying to take the throne. The Imperiale 400, retro-styled cruiser will make its debut in the Indian market soon. However, the bike has just gone on sale in the Chinese market, for a price tag of CNY 23,800, which roughly translates to INR 2.40 Lakh. 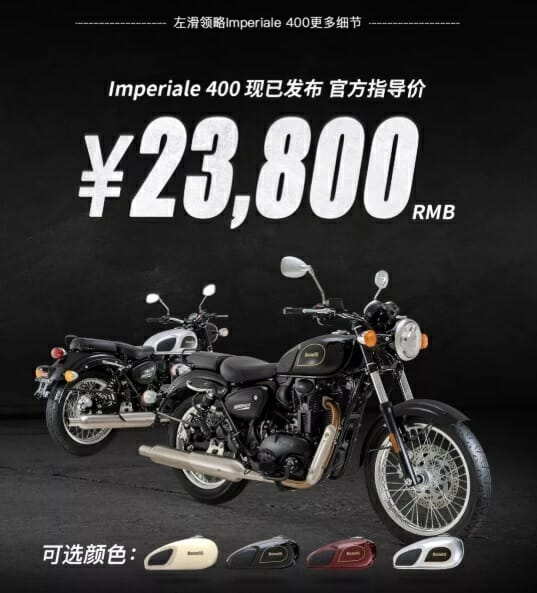 In terms of looks, the Imperiale 400 is quite similar to the Royal Enfield Classic 350. There is a circular halogen lit lamp in the front, with a twin pod instrument console. The tank pad seems to be taken from the Royal Enfield Classic 350, however, the similarities in design end here. The seats are split in two, and look much more comfortable and modern compared to that of the Royal Enfield. A generous amount of chrome can also be seen on the bike at places like the rearview mirrors, headlight surrounds, etc. The wheels are spoked units, measuring 19-inches in the front and 18-inches at the rear.

Also Read: Benelli Opens A New Showroom In The City Of Mumbai

Measuring 2,170 mm in length, 815 mm wide and standing 1,140 mm high, the Benelli Imperiale 400 tips the scales at 200 kg. The ground clearance is 150 mm and the bike can carry 12-litres of fuel. While it may seem rather heavy, a 373.5 cc, air-cooled, fuel-injected, SOHC motor makes sure the bike has enough go. The motor has been tuned to produce 21 PS of peak power and 29 Nm of twist, while being Euro-IV compliant. While the power figure is more than that of the RE Classic 350, the Jawa engine takes the lead. The torque figure, however, is the most in the Benelli. Dual disc brakes, along with dual-channel ABS is expected to come as a standard feature on the bike, when it is launched later this festive season. However, Benelli will have to price the product much closer to the RE and Jawa if they want to have a market share in this segment.