The world seems to be moving towards SUVs at a rather fast pace. Customers have started preferring these big cars over traditional sedans, coupés and convertibles. No wonder, major car manufacturers have at least one SUV in their stable, even brands that have traditionally been making sporty cars. Porsche started this trend with the Cayenne, which was joined by many other companies. Bentley now offers the Bentayega, Lamborghini has the Urus even Rolls Royce has come up with the Cullinan to boost sales. English car maker Aston Martin is going to grab a piece of this pie soon, with the all-new DBX SUV which has been teased ahead of its unveiling in December, later this year.

The teaser showcases a tiny bit of the front end of the car, sans camouflage. The trademark Aston Martin grille can be seen here, with fog lamps integrated on the lower end of the bumper. The headlight assembly also looks new, while resembling the traditional Aston Martin design language. The teaser also confirms that the DBX draws quite some inspiration from the DB11 coupé. This could also imply that the new DBX is based on a modified DB11 platform. The teaser, in the end, also confirms that this SUV will be unveiled in the month of December, later this year. 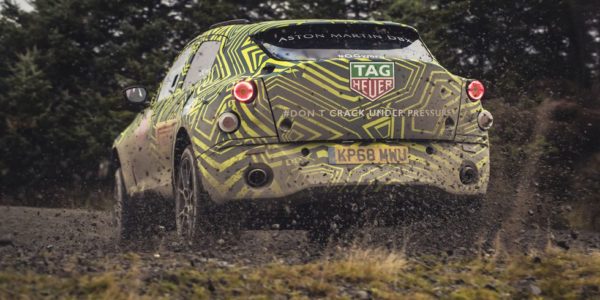 The SUV is very likely to come with the AMG sourced 4-litre V8. However, the 5.2-litre V12 from the Vantage could also be on offer, this is something we will have to wait and watch. While the production-ready car could be unveiled by the end of 2019 and get on the road by 2020, there is a great chance of it being offered in India as well. Considering the fact that our market loves the big bad SUVs. Cars like the Cayenne, the Urus and even the Bentayega have helped boost the sale figures of their respective brands. Aston Martin could also use this SUV to raise their numbers in the Indian market. Stay tuned for more news and details on this upcoming SUV.