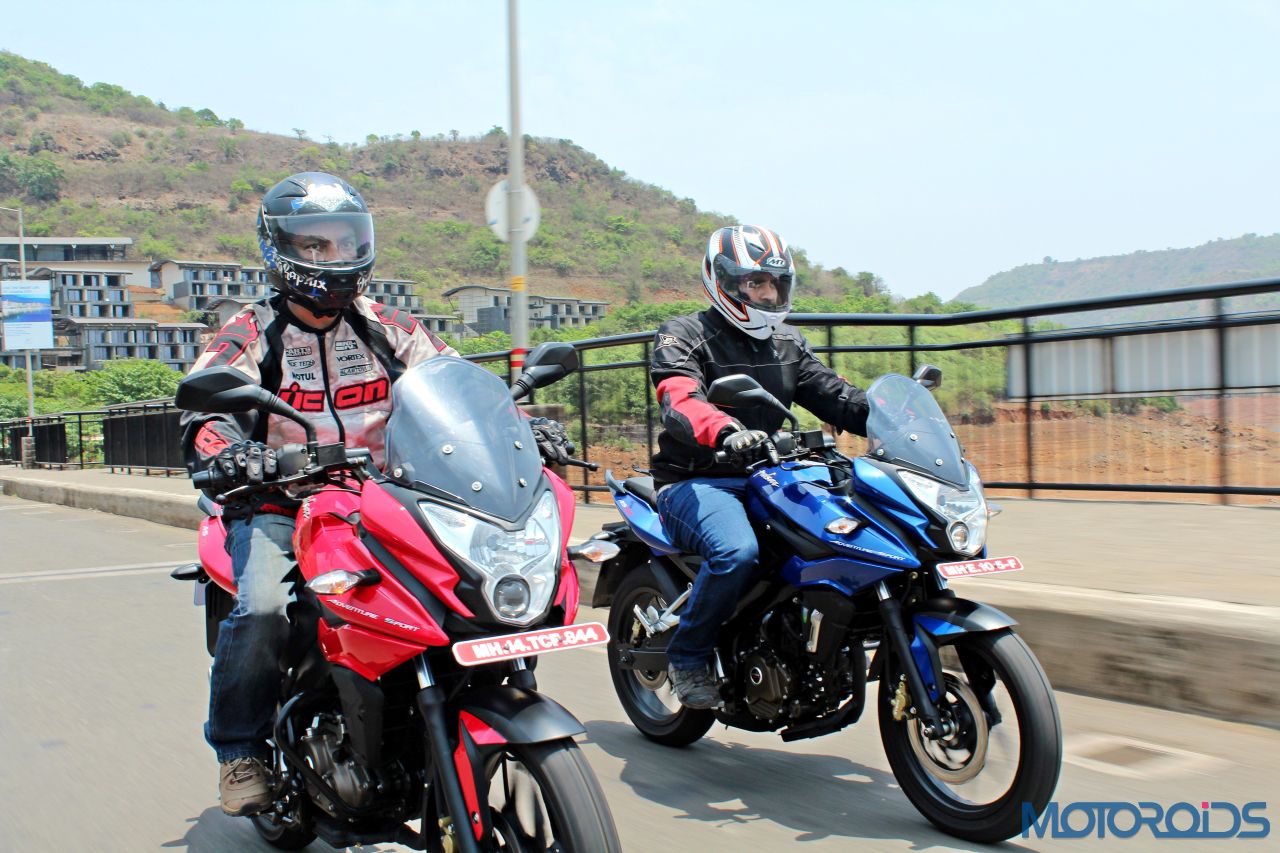 It’s always fun when media events happen on the city outskirts. Be it Mumbai or Pune, it gives us a chance to step out of the office and get some refreshing lungful of air inside us. So, when Bajaj invited us to a swanky resort amid the cornering heaven that is Lavasa, more than one hand was raised at the office to snag the review. Thankfully, Bajaj had two models for the event.

Taking a breather on our ride, we stopped to quench our thirst and to swap biking stories. As my colleague Saeed shared his first encounter and infatuation with the semi-faired LML Adreno and its 100 section tyre which, as a kid, made him feel that the motorcycle can stand on ground without any support, I stared at the two motorcycles standing in front of me.  The setting was perfect, with scenic greenery covered hills, a placid lake and bright coloured houses of Lavasa as the backdrop to the main actors, the bikes. Resplendent in their red and blue hues, the new semi-faired Pulsar duo, namely AS150 and AS200, is Bajaj’s attempt at catching the attention of those bitten by the touring bug. 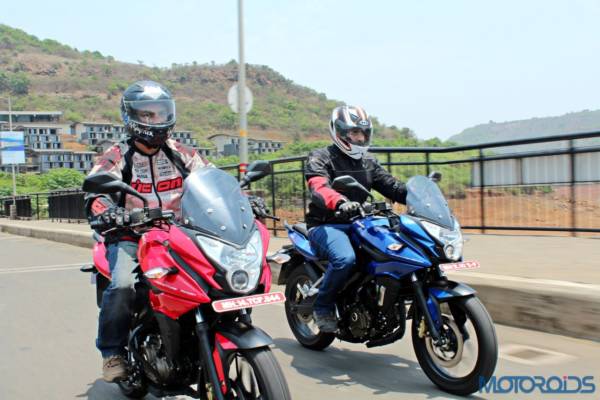 The segment, which was once defined by the Hero MotoCorp Karizma R and later by Bajaj’s very own Pulsar 220, has been waiting for a  worthy contender. Now, Bajaj plans to venture further into the touring segment with the introduction of the AS150 and AS200. But has the Indian two-wheeler giant ticked the right boxes to make the new Adventure duo a tourer and satisfy the needs of the wanderers? We rode the motorcycle on some of the finest stretches of road this side of the country, along with some bit of off-roading, to know the character and the comfort zone of these new motorcycles. Here’s what we found.

Design and Features – The similarities between AS150 and AS200 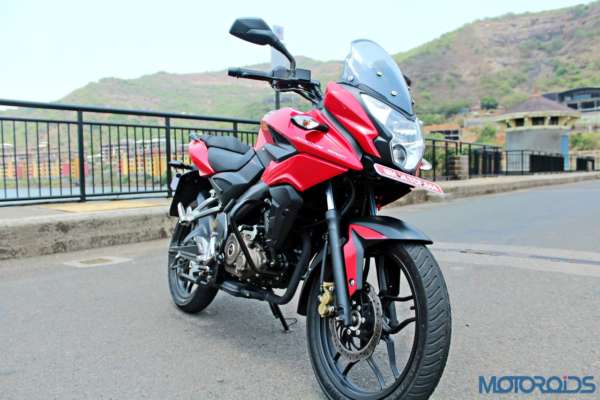 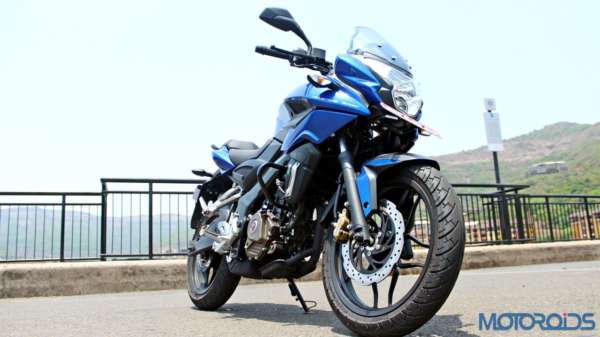 The AS nomenclature stands for Adventure Sports but the audience should not take the tag too literally. Instead, what the new AS150 and AS200 duo are, are everyday motorcycles with some clever changes made to handle the needs of tourers better than other offerings, and be capable to handle a bit of off-roading should the need arise. Previous attempts at either making an adventure or long distance motorcycles in India haven’t been comprehensive enough – blame it on the cost consciousness of the market or whatever. The AS duo, too, aren’t meant to plug that gap authoritatively, they just can’t at the price. It is a tentative step forward, though. Bajaj is still testing the waters – and should the reception be favourable, who knows, Bajaj just might go the full hog and give us our first, proper adventure tourer. 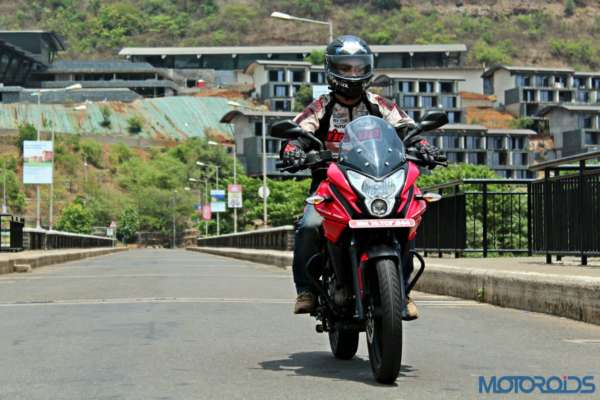 So what do these new motorcycles look like? Well, if you exclude the newly designed fairing, an updated headlight setup and an extended rear fender, the two motorcycles are very similar to the Pulsar 200NS. The headlight appears to be an evolution of the Pulsar 200NS with a new projector setup that comes as standard on the AS150 and AS200. The pilot lamps are re-positioned and are placed over the high beam light instead on the chin, as seen on the naked roadster. The projector provides the low beam while the high beam is taken care of by the conventional bulb. The headlight is housed neatly in the newly designed front fairing and complements the front look of the motorcycle.

The front fairing is a good mix of balanced aesthetics and functionality. Bajaj claims that the fairing on the AS150 and the AS200 has been thoroughly researched upon and designed for better wind protection and the unit performs its duty surprisingly well. Along with the wind protection, the fairing also makes the motorcycle look muscular and larger in size than the 200NS. It’s been smartly divided into three parts, and to avoid a monotonous look, Bajaj has offered the setup in a dual tone finish. The entire fairing merges into the fibre tank cover and here on the motorcycle starts looking like the 200NS. 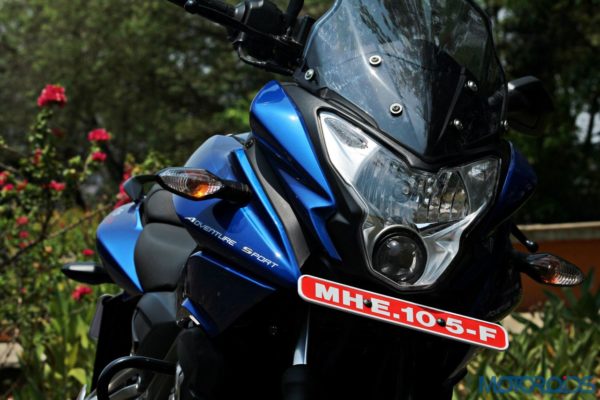 The 12 litre fuel tank holds the 3D Pulsar logo and comes with a tank pad to protect the paint from getting scratched. The tank is followed by a split, well padded saddle offering good cushioning for long distance journeys. The tail end of the motorcycles holds the rear panel, pillion grab bar and LED tail light that have been picked up from the 200NS. But unlike the naked roadster that gets a short, tidy tail unit to hold the number plate, the AS150 and the AS200 receive a large fender to protect the rider and the pillion against flying mud and water from the rear wheel, when things get wet and mucky. The rear fender holds the registration plate as well as its illuminator and the entire bodywork of the Pulsar AS150 and AS200 has been bolted upon the pressed steel perimeter frame of the NS200.

The Differences between AS150 and AS200 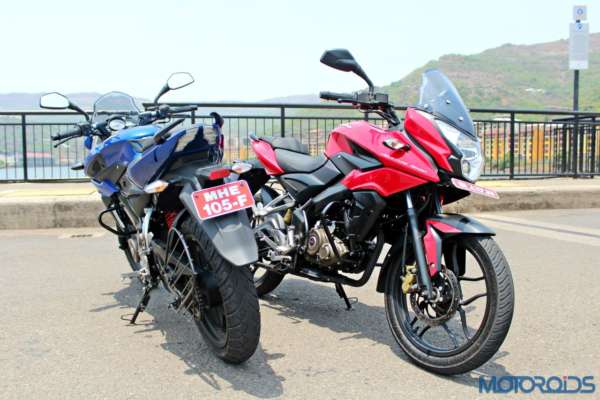 While the AS150 and AS200 are near identical and have almost the same dimensions, the former has a slight ground clearance advantage over the latter. The AS150 has a ground cleareance of 170mm, while the corresponding number for the 200 stands at 167mm. Moreover, the AS150 receives an air-cooled motor whereas the AS200 gets a liquid cooled engine which gives the AS150 a weight advantage of 10 kilogram over its bigger sibling. Additionally, the AS150 comes with a centre stand and kick starter as standard whereas the AS200 does not. Other notable differences between the two are the tyres and brakes. The AS150 receives relatively skinnier tyres than the AS200 but that doesn’t give the latter much advantage. We will talk about it in detail in the handling section. The AS200 also benefits from front and rear disc brakes whereas the AS150 only receives front disc brakes and has to make do with a drum brake at the rear. The swingarm on the AS200 also looks beefier than the AS150 and comes with a chain tension gauge.

The overall build quality seems okay but it’s nothing stellar, though a practical, simplistic design of the AS duo did manage to impress the entire team. Having a similar design and sharing various parts gives Bajaj a huge cost advantage which reflects in highly competitive pricing of both the motorcycles.

That’s that with the design part. But how do the new motorcycles perform in real world?

The As 150 and AS200 are probably the most awaited and the most important Bajaj Pulsar motorcycles in a very long time….