It has emerged that Audi India will showcase the Sport Quattro Concept at the Auto Expo 2014. The Audi Sport Quattro concept was unveiled at the Frankfurt Motor Show in September last year and could spawn a production model in near future. The production model would be spiritual successor to the legendary Audi Quattro. 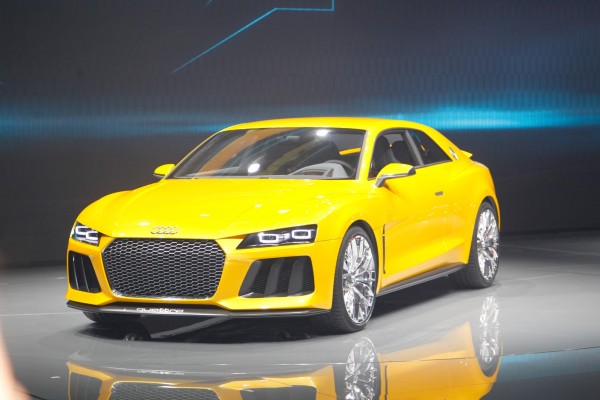 When unveiled, Audi told that the chief purpose of the Quattro concpet is to showcase the versatility of the much publicized MLB platform. This is the same platform that will also underpin the future Audi models above A4 and Q5 up.

“There are many driveline possibilities for the car,” said a high Audi official. “It has a lot of potential due to the platform, one of them very powerful. If we have a car on the modular system, we can take other drivelines. It has a potential for bigger volume. To make this car requires a big investment, and it makes sense for us to widen its potential.”, he added.

Powering the Audi Sport Quattro Concept is a petrol-electric plug-in hybrid drivetrain that enjoys a total power output of 690bhp, which makes this car the most powerful Audi ever. The concept measures 4602mm in length, 1964mm in width and 1386mm in height. The car has a wheelbase of 2784mm. While the front-mounted engine has a max power output of 552 bhp of max power and 516 lb ft of peak torque, the electric motor brings in another 148 bhp and 295 lb ft. A rear-mounted 14.1kWh battery pack provides juice to the electric motor.

Audi Sport Quattro is high on fuel economy and low on CO2 emissions. Much of this has to do with impressive features such as cylinder deactivation technology, a stop-start system and the assistance form electric motor.