The Audi Sport Quattro concept has production potential as a performance GT to be positioned between the Audi TT and Audi R8 in the company’s range, technical chief Ulrich Hackenberg has revealed at the Detroit motor show. 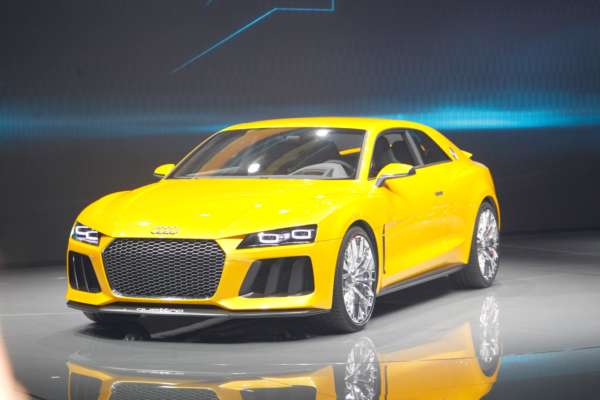 But Hackenberg said such a model, if it were to be produced, would require a big investment and would need to be built in greater numbers as a result, therefore making it the firm’s mid-range sporting GT makes more sense. The main aim of showcasing the Sport Quattro was to show the versatility of the upcoming new MLB platform, which will be the platform used by all Audi saloons and SUVs bigger from the A4 and Q5 up.

“There are many driveline possibilities for the car,” said Hackenberg. “It has a lot of potential due to the platform, one of them very powerful. If we have a car on the modular system, we can take other drivelines. It has a potential for bigger volume. To make this car requires a big investment, and it makes sense for us to widen its potential.”

The new Sport Quattro is a petrol-electric plug-in hybrid with a combined power figure of 690bhp, making it the most powerful Audi ever. The concept is 4602mm long, 1964mm wide and 1386mm high, with a wheelbase of 2784mm. The front-mounted engine produces 552 bhp of max power and 516 lb ft of peak torque, while the electric motor, mounted between the V8 engine and eight-speed automatic gearbox, produces 148 bhp and 295 lb ft. The peak combined outputs are 690 bhp and 590 lb ft. Audi’s quattro all-wheel drive system includes a sport differential used on the rear axle. A rear-mounted 14.1kWh battery pack powers the electric motor.

Audi Sport Quattro has impressive economy and CO2 emissions figures: 113mpg and 59g/km respectively on the EU combined cycle. The concept’s efficiency is improved by features such as cylinder deactivation technology, which shuts down four of the V8 engine’s cylinders on partial loads, a stop-start system and the ability to travel up to 31 miles on electric power alone.

Stay tuned to Motoroids for more updates on the Audi Sport Quattro.