Not too far away from being launched officially, the 2019 Bajaj Dominar has revealed quite a lot of its new features in a new TV commercial. Called the “World’s Favourite Indian”, the new AV puts the focus on Bajaj’s credentials of being a truly global motorcycle manufacturer. Coming back to the motorcycle in question, let’s take a look at what has changed.

First up, the fat, USD front forks are clearly visible and are finished in chrome/silver, in comparison to the black telescopic forks on the current-gen motorcycle. Looking at the rider in the visuals, it appears that there have been changes made to the ergonomics to make the riding position more comfort-oriented now.

Besides that, the new double-decker exhaust system is clearly visible and should make the motor sound better than it does on the current-gen bike. We expect a minor bump in the power figures too. Revisions to the engine could also include a DOHC setup along with some tweaks to the ECU.

What was first seen as a feature on the Bajaj CS 400 concept at the Auto Expo 2014, has finally made it to the 2019 Baja Dominar. A tank-mounted secondary display will join the primary LCD screen to provide ride related information. This display will sit just above the fuel tank lid and will convey information about the gear selected, time, trip and odometers. Apart from these changes, the front disc brake will get radially-mounted calipers and there could be some improvements made to the cooling system too. The gold-finished wheels on the current-gen bike will be replaced with a black and silver finish. 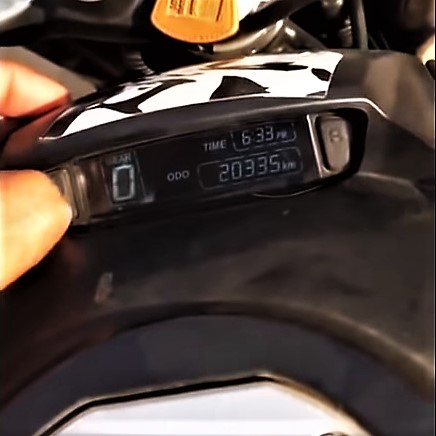 In terms of pricing, the 2019 Bajaj Dominar will ask for a little more than the existing bike. However, even then and with all these new improvements, it will continue to present itself as an excellent value-for-money offering in its segment. We’ll bring you more updates when the bike is revealed and launched officially. Until then, stay tuned!