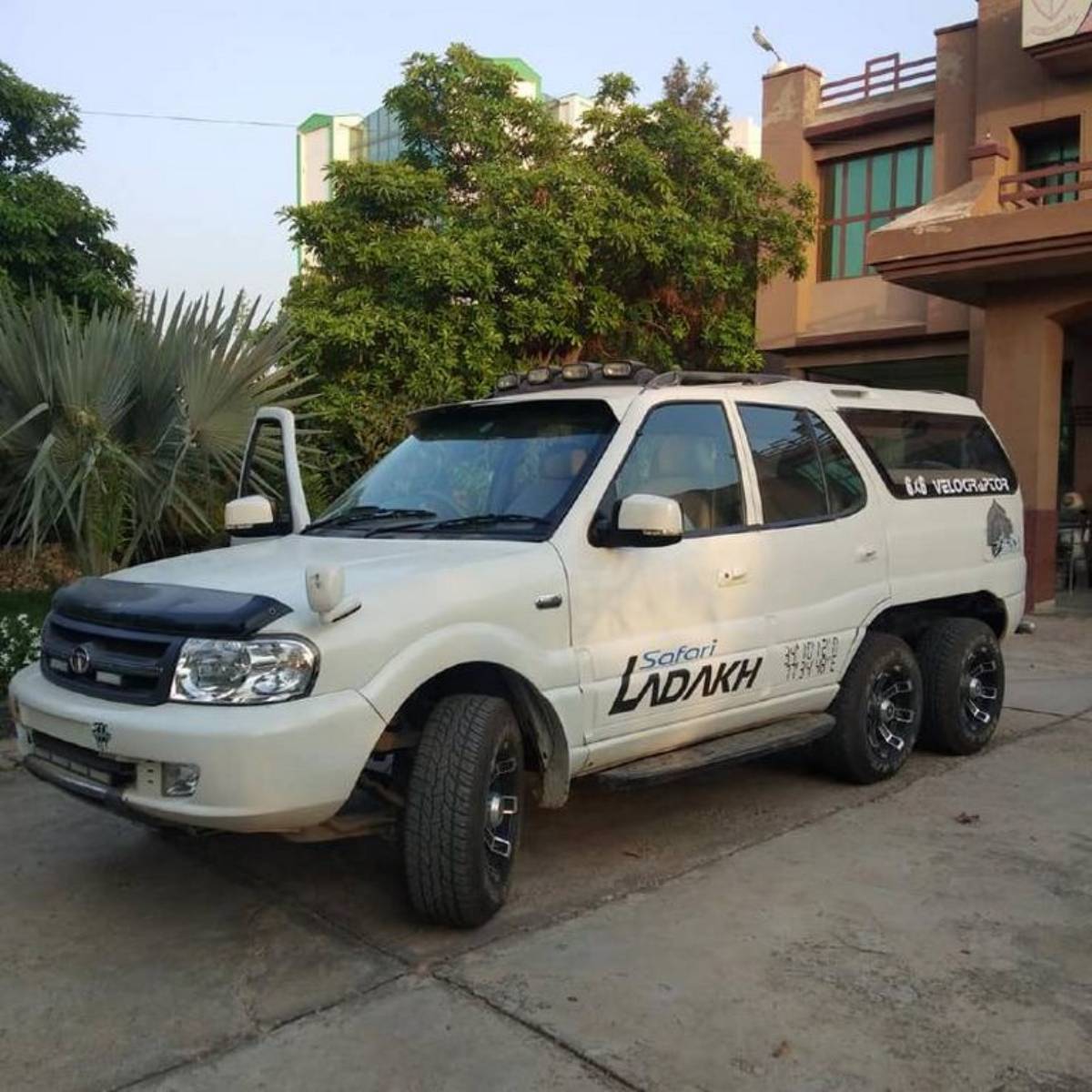 The iconic Tata Safari nameplate was discontinued earlier this year in the Indian market after more than 21 years of production. During its successful production run, the design of the Safari remained largely the same. However, it received 2 major mid-cycle updates during its lifecycle, which came along with two new suffixes – Dicor and Storme.

There are many who still give high regard to Safari, especially because of its tough build quality. The Safari still enjoys a cult status around the Indian masses, and thus, a lot of them can be seen modified with aftermarket alloys and more. 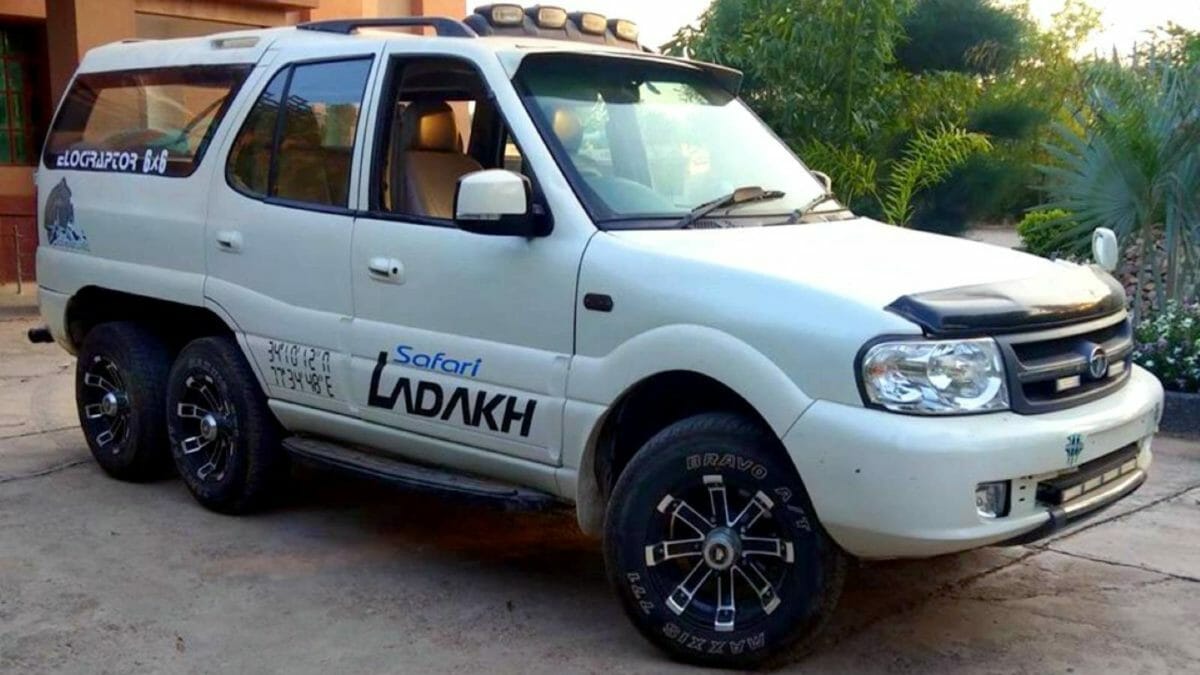 Our country is not new to the idea of extreme modifications and the Tata Safari has seen its fair share of after-market modifications over the years. However, here’s one Safari, which has been stretched out and converted into a 6-wheeled monster. Dubbed as the ‘Tata Safari Velociraptor 6×6’ (as its sticker work suggests), this Safari is inspired by the Ladakh Edition.

Talking of the modifications on this Safari Dicor, the most evident one is the addition of the third axle. It has been done by stretching the frame and body of the SUV. However, the chassis is only tweaked out after the mounting points of the rear axle. Despite having six wheels (minus spare), the SUV still remains a 4×4 with an extra dead axle (non-powered axle). Hence, it is essentially a Tata Safari ‘6×4’. The third axle is not connected with a propeller shaft.

Apart from these, the other modifications on this Safari include a hood deflector at the front, a deflector at the front windscreen, and a set of aftermarket alloy wheels. At the front, the grille has been updated and now gets an all-black colour. Everything else remains in stock form. Also, there are LED auxiliary lamps mounted to the roof of the car.  On the rear quarter panel, the owner has also used a sticker of VelociRaptor 6X6, which is the 6-wheeled version of the Ford’s F-150 Raptor. 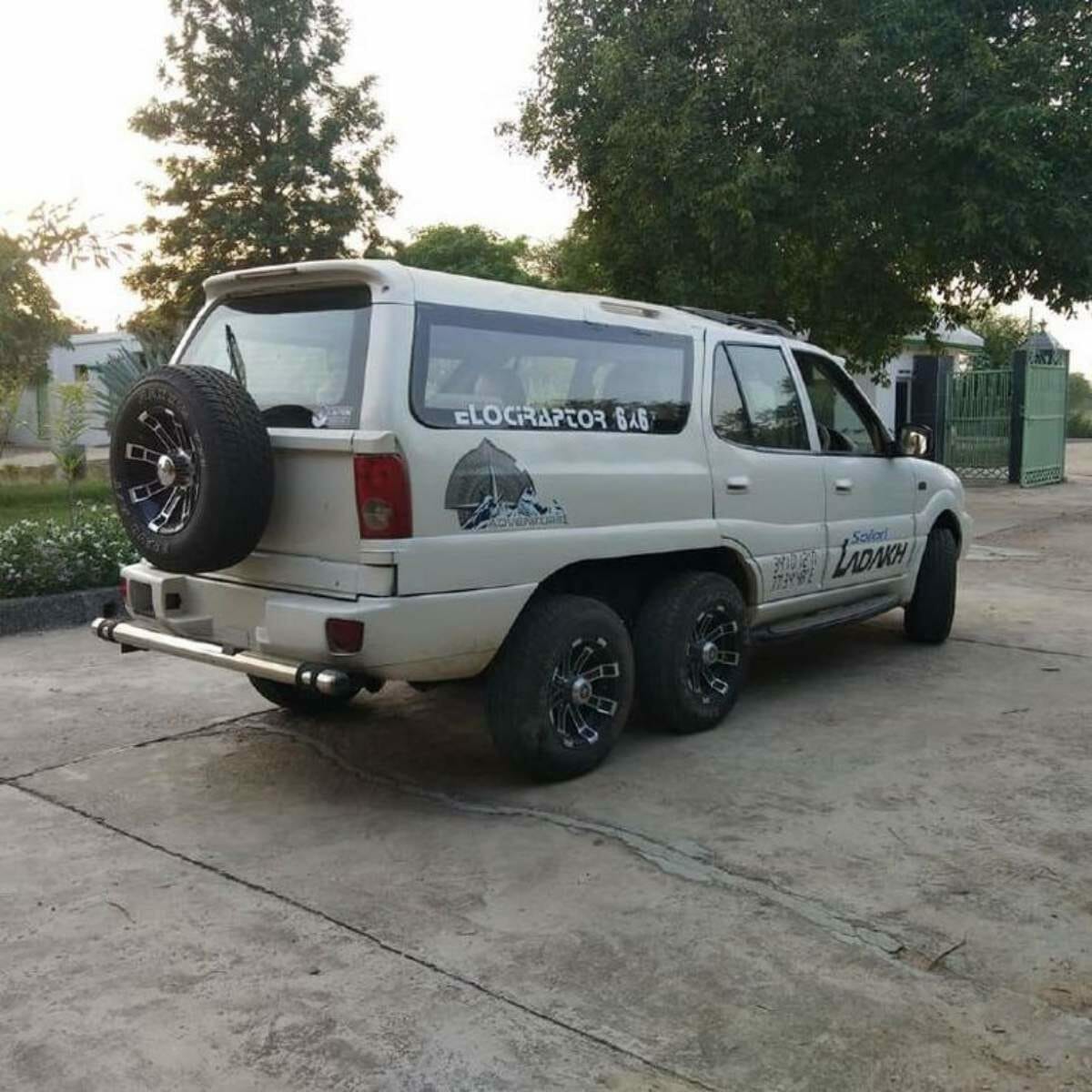 Additionally, the Tata Safari 6 wheeler gets minor black treatments,eight-spoke alloy wheels shod with deep-treaded rubber; rear bumper guards, fender mirror and random stickering. One can say that the vehicle does not get any added mechanical advantage since the extra set of wheels is not part of the powertrain. In fact, its performance could retard a bit due to additional weight. On the bright side, the extended third compartment alone can seat six passengers with relative comfort thanks to regular benches placed on either side.

Tata Motors showcased the Ladakh Expedition concept of the Safari at the 2014 Auto Expo and this vehicle draws a few design inspirations from that too. The owner from Haryana has claimed that it was not modified for increasing its off-roading capabilities. Instead, the extra room in the rear is the primary motive behind the modification. Therefore, the addition of the third axle. The entire cost of the modification was around Rs. 8 lakhs, however, these are not street legal in any way. 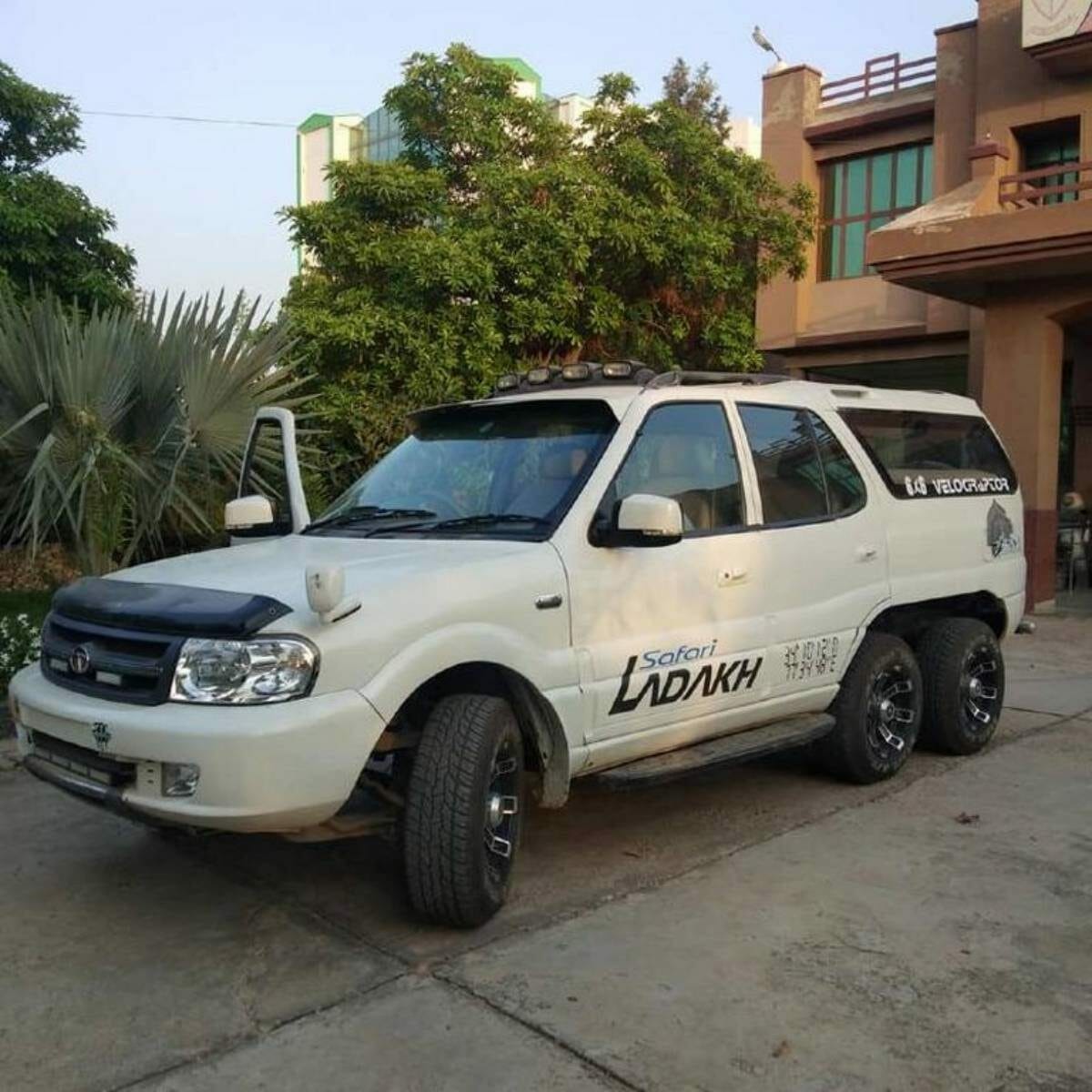 Tata Safari Dicor was offered with a 2.2L 4-cylinder turbocharged common rail diesel engine. This engine produced a peak power output of 140 PS and max torque of 320 Nm. It came mated to a 5-speed manual gearbox only, whereas an optional 4WD layout was also on offer. The 4WD system of the Safari was an electronic one and featured the Shift-On-Fly mechanism, where the user could shift from 2H to 4H up to speeds of 60 kmph. Also, it featured a limited-slip differential at the rear to suffice in case of limited traction.

Check out our varied Interior Car Accessories to help you customize your car and revamp its style. Shop the entire range on our Amazon shop.