Home MG Motor How About An MG Hector Built For No Roads?

The MG Hector has garnered quite a good response from Indian buyers ever since its launch last year. Such has been its popularity, even during this lockdown, MG has received over 20,000 orders of the Hector. At the time of its launch, the Hector stirred up a storm after it ate into the sales of major automakers including Hyundai, Tata and Mahindra. This was also aided by the launch of Kia Seltos as well which eventually displaced Hector to claim the numero uno position in this segment. The car came with plenty of connectivity features and managed to woo a large audience.

Now, the Hector may be referred to as an SUV due to its form factor but does not have any such credentials which are the traits of an SUV- the most important being a 4×4 drivetrain at the very least. But then, many of the so-called SUVs sold in India are the same. However, Yogi Sejwal Design has gone ahead and given a makeover to the Hector and turned it into a wild, off-road SUV.

The render-video takes the standard Hector to an off-road guise after a lot of effort. Upfront, the chrome elements of the car have been ditched for a rather blacked-out treatment. This also includes the MG logo that has been given an orange tint. The bumper at the front is a new unit that comes with a skid plate along with two tow hooks and a winch.

The front bumper has been replaced by an off-road spec unit that is also fitted with a large metal bash plate and tow hooks. The grille has been blacked out with two silver cutouts on either end. Towards the top, this Hector has been equipped with a tri-unit LED bar that provides illumination when necessary. A roof carrier and an extra LED bar are also present on the top. 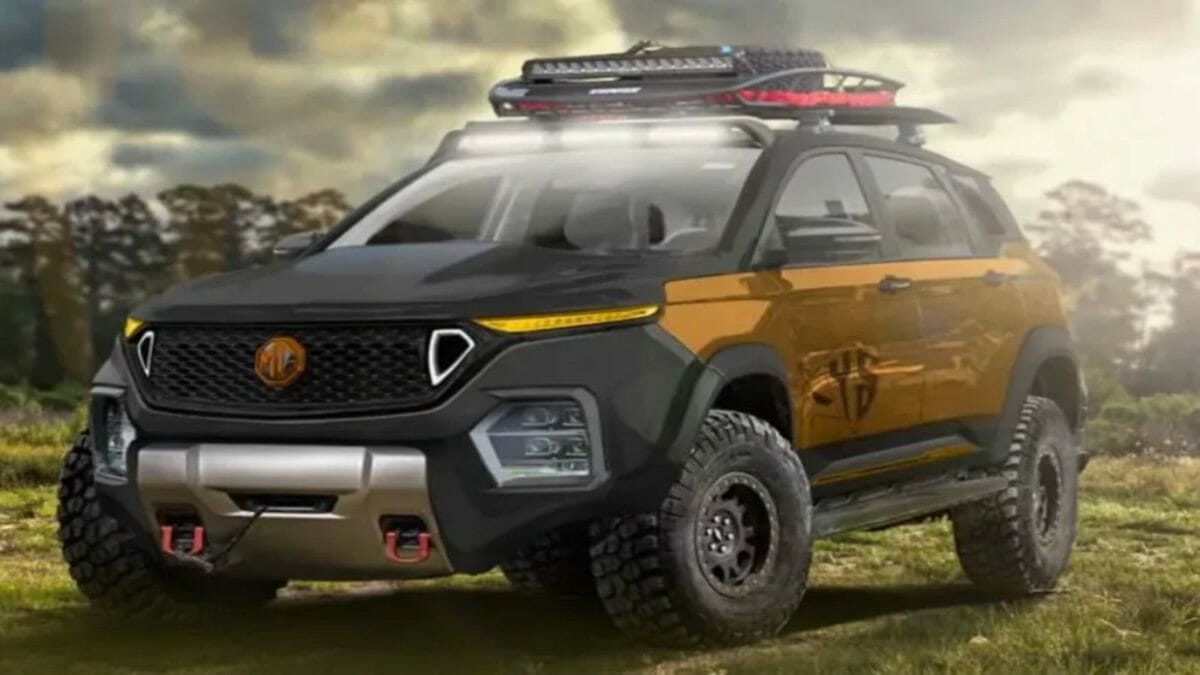 The side gets a new look as well with a raised body, all courtesy of the new bigger off-road tyres on the car. In addition to this, the car also gets wider footboards that allow easy entry and exit from the car. On top of the car is an extra carrier and an extra LED bar as well. While the render is purely cosmetic, we believe that the car’s current powertrain will get the job done for the road less travelled.

MG offers 3 engine options (including the hybrid) with the stock Hector but for this scenario, the 2.0-litre diesel engine will suit the job best. The diesel engine cranks out 170 PS of power and 350Nm of peak torque. The diesel variant is only available with a six-speed manual transmission. In addition to this, MG also offers an optional 48V mild-hybrid tech that adds 20 Nm to the existing torque figures. As attractive it may look, this render is unlikely to go into production. However, if an enthusiast is willing enough he can get it customised.