Jaguar’s Special Vehicle Operations-developed XE SV Project 8 recently displayed its performance capability by setting the fastest Nurburgring Nordschleife lap time for a four-door production car. The car had previously set this record by completing the 20.8 km lap in just 7 m 23.164 s, almost 2 years ago, however, the Project 8 returned to the iconic track last week to beat the old record by about 2.9 seconds. The new officially-verified time now stands at 7 m 18.361 s. This new record also makes the XE SV Project 8 almost 7 seconds faster than any other four-door production car in the market. 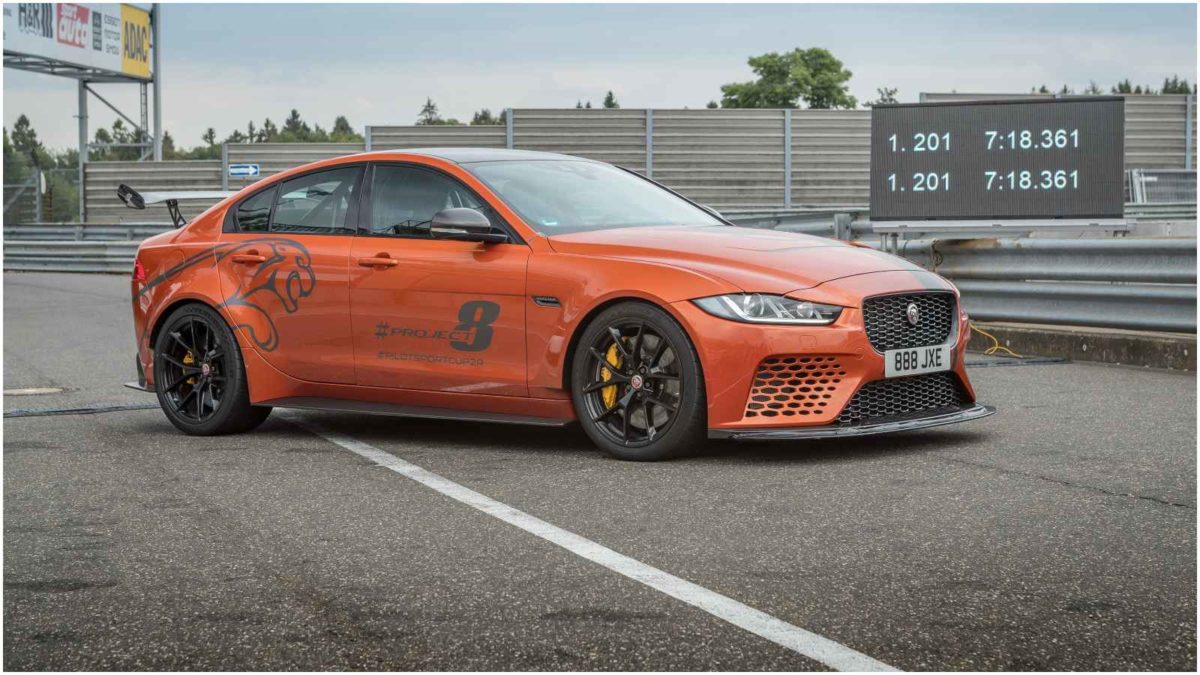 Mechanically speaking, the new Jaguar XE SV Project 8 is powered by the highly tuned 5.0-litre Supercharged V8 which can produce around (447 kW) 600 PS of power. All this power channelled through the all-wheel-drive system is able to propel the Project 8 from 0-100 km/h in just under 3.7 s and provide a top speed of about 320km/h. The car also features a fully-enclosed flat underbody for improved aerodynamics, which is the key to its blistering performance. The production of the limited-edition Project 8 will finish this year and there are around three distinct four-door specifications available: a lightweight two-seat Track Pack (to record lap times), a four-seat configuration with the same aero package and performance as the Track Pack and the Touring specification with a discreet fixed rear spoiler (to provide the ultimate Q-car experience). The XE SV Project 8 will be limited to 15 units worldwide and will get an electronically limited top speed of 299 km/h (186 mph). 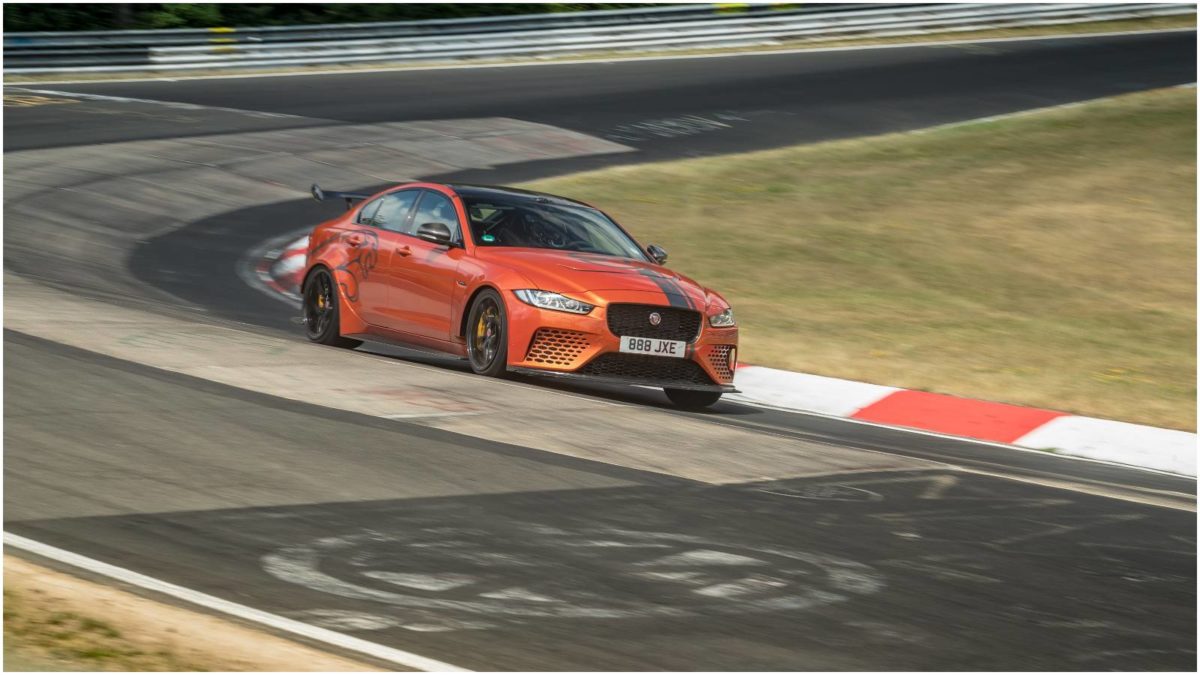 Coming back to the legendary German circuit in a production-specification two-seat Track Pack version of Project 8 was development driver Vincent Radermecker. When he drove the car around the track to set the record, the car’s height-adjustable twin-spring coil-over suspension was set in ‘track’ ride height, with adjustable front splitter and carbon fibre rear aerodynamic wing positioned for maximum downforce and stability. To maximise the performance and steering precision, Project 8 was also fitted with new off-the-shelf ultra-high performance Michelin Pilot Sport Cup 2 R tyres, which were tested and chosen by SV engineers for their capability on the track, as the road-legal tyres use rubber compounds. 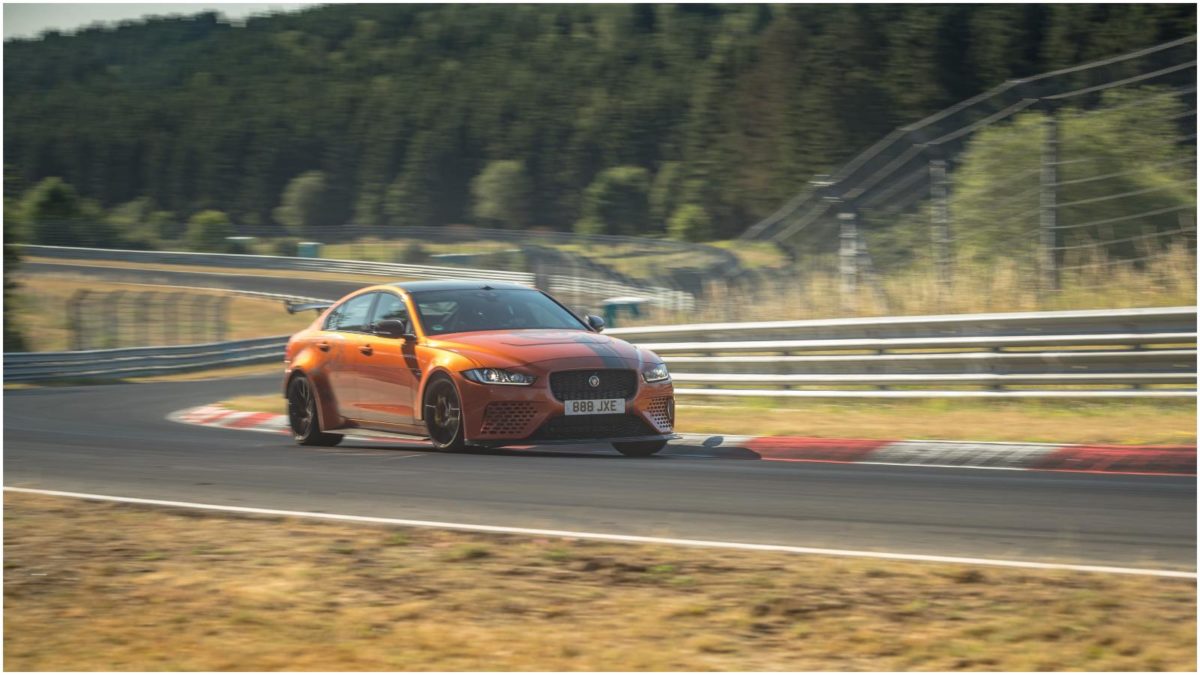 Jamal Hameedi, Engineering Director, Jaguar Special Vehicle Operations, said: “The original Nürburgring time set by Jaguar XE SV Project 8 demonstrated the extreme performance envelope of the world’s fastest production sedan, but the SV team is driven by a motorsport mentality and we knew Project 8 could go even faster. This new official record time is a fitting reward for everyone who has played a part in pushing the boundaries for our customers with Project 8.”