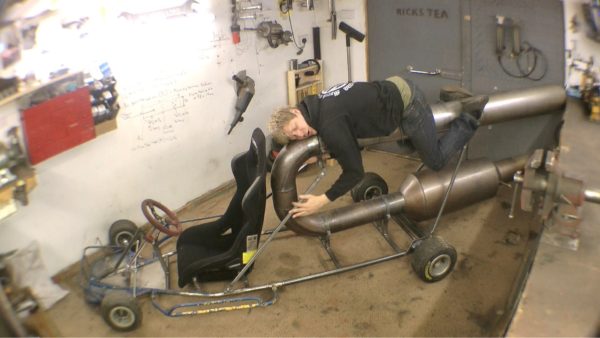 We are sure you all remember this bloke from England, don’t you? We will refresh your memory anyway. His name is Colin Furze and he’s a plumber. That said, he is unlike any plumber we have ever seen. We had earlier done an article on one of his other creations – a 100bhp auto-rickshaw! That was pretty insane on its own, but just to prove to the motoring world that he means business, this time Furze has gone a notch above. The plumber from United Kingdom has created a jet-powered go-kart! We are not joking and here’s proof of his manic creation. 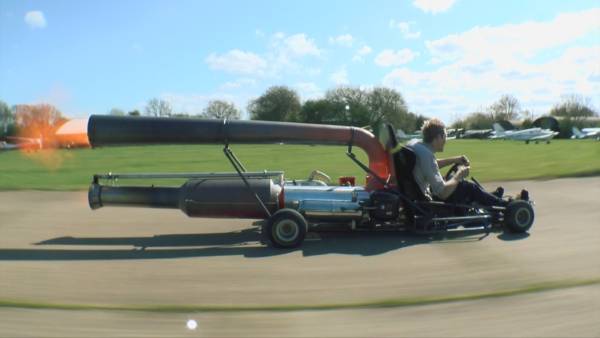 Yep, that is a jet engine bolted to a miniscule go-kart!

Mr. Furze has extended the wheelbase of his go-kart by 1.5-metres, so as to allow him the fitment of the jet engine. The whole contraption wouldn’t seem out of place on the set of Mad Max or a Men in Black movie. If you think that a jet engine will help boost the velocity of this go-kart, you are thinking right. It does. Top speed as of now is 60 mph or 97 km/h. That’s crazy for a go-kart that has been tinkered by someone whose attitude towards safety seems to be, “I don’t care about safety.” 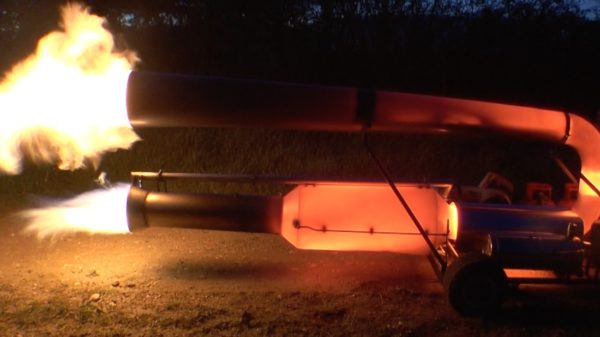 Flames and red-hot ‘piping’ are just a few inches away from his head. No risks here whatsoever.

The engine, called a Pulsejet, is fueled by propane gas and diesel, the former being used to start the thing. Also, remember we told you about this go-kart’s diesel fuel? Well, unlike in a normal car, an everyday fuel pump wouldn’t be able to cope with the sheer amount of fuel that needs to be sent to the pulsejet engine. So Furze, being as ingenious as he is, modified a fire extinguisher tank and uses that to carry pressurised diesel fuel. This means that the fuel will now flow at the required rate to keep the fire in the jet engine burning. 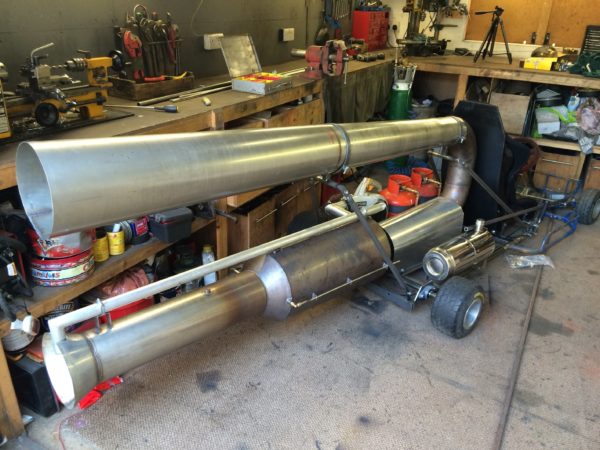 You can see the orange gas tanks and all the pipes. Of course, he knows a thing or two about pipes.

Also, being a jet engine, it isn’t very frugal. It can go through 22.7 litres of fuel in just half a mile or 0.8 kilometres and that’s pretty insane. According to Furze, his jet-powered go-kart can go even faster, provided that there’s a long enough runway. Where’s that one from the Fast & Furious 6 movie? Anyway, tell us what you think about this amazing and extremely ridiculous creation. We have also attached a video and some images below for your viewing pleasure.