In Mad Max: Fury Road, there is a character called Doof Warrior. He stands on top of a clapped out MAN truck fitted with a supercharged V8 engine and thrashes out tunes from a guitar that is also a flamethrower. The entire truck is basically a rig full of speakers. At the back of it are a horde of drummers giving the Doofwarrior musical company. All of this madness happens while the truck is in motion and no part of it is CGI, it was all shot for real.

Then there’s the lead baddie’s vehicle of choice. Called Gigahorse, it is a pair of 1959 Cadillac Coupe de Villes mounted on top of each other. Motive power comes from two V8s with “over 600 cubic inches of displacement locked into one driveshaft and 120 meters of garden hose irrigation.” 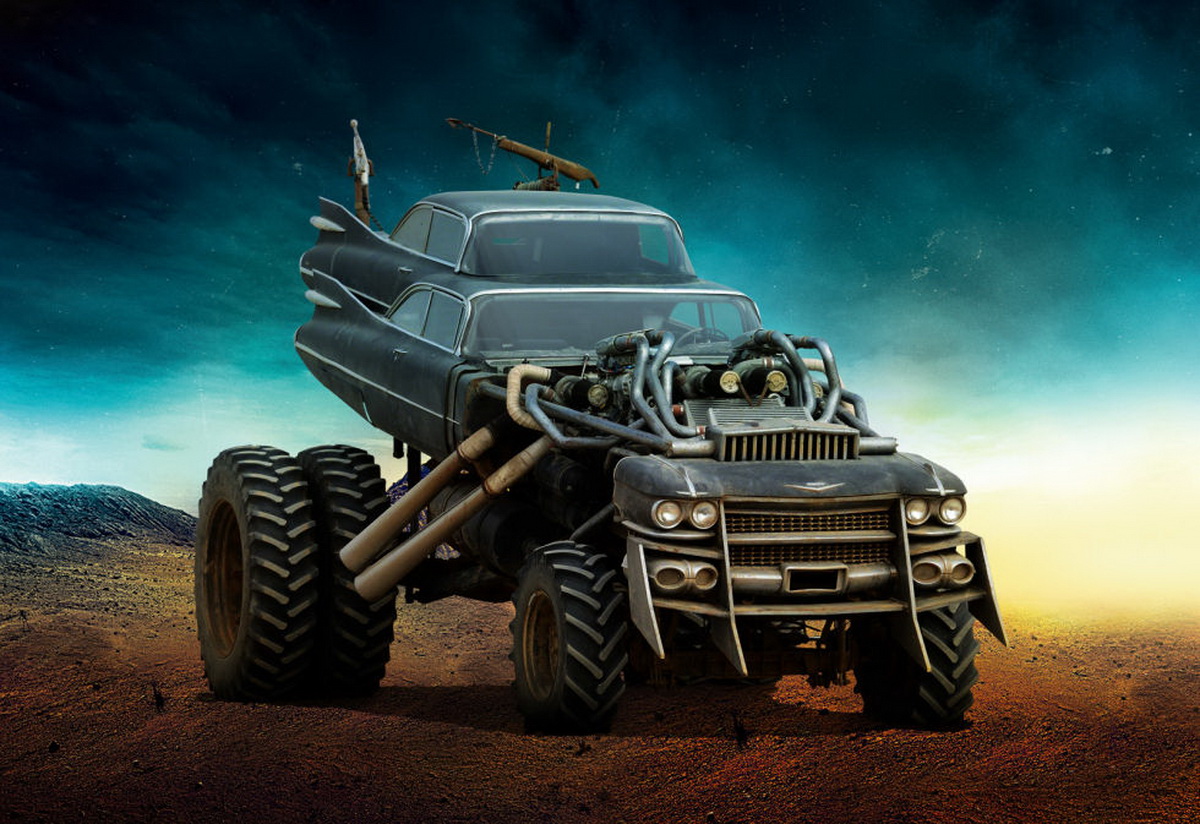 These are just two of the many, many vehicle-fueled excesses that you can find in the new Mad Max: Fury Road movie releasing today. In fact the entire movie is basically a two-hour extended chase sequence with a smattering of dialogue and character building here and there.

And it is glorious. It is, by far, the most spectacular celebration of our fascination with wheels we have ever seen on screen. 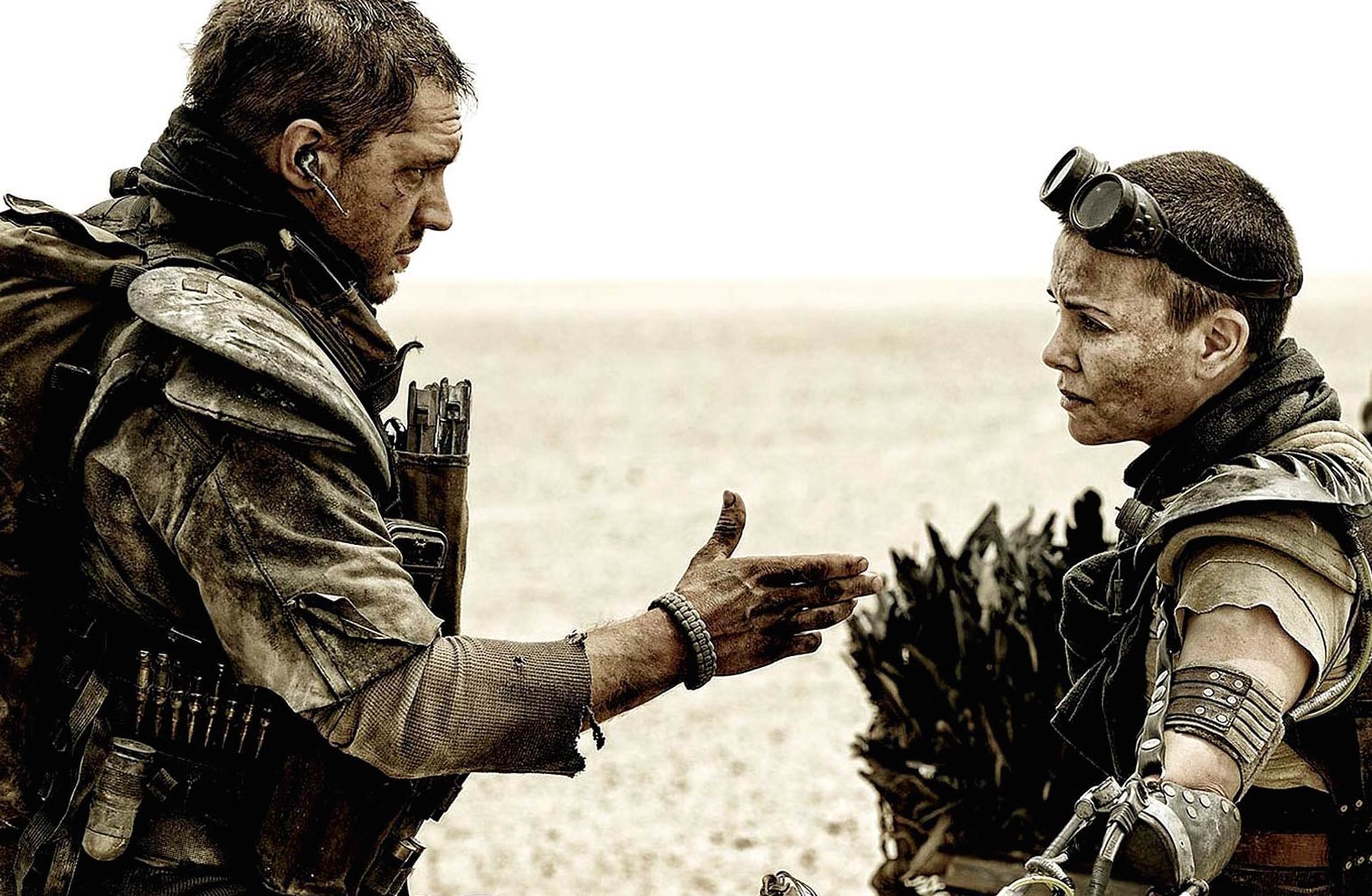 I wasn’t even born when the last, leave alone the first, Mad Max movie was made. In case you don’t know, here’s a quick primer. The original mad max came out in 1979, not from Hollywood but all the way from Australia. A low budget hardcore post-apocalyptic chase and action movie, it immediately made a star out of not just Mel Gibson but his ride, a 1974 Ford Falcon XB Interceptor police sedan with a V8 engine. Made on a shoestring budget of barely $4,00,000 dollars, it became one of the most profitable films ever and held onto its record for decades.

Mad max was followed by Mad Max: Road Warrior in 1981. It upped the ante in terms of crashes and actions and explosions and general allround badassery. This was followed by Mad Max: Beyond Thunderdome, a relatively less well-received endcap to a trilogy that has defined action movies ever since. Remember, this was a time before CGI and visual effects could virtually create an entire movie without a single real metal in sight. 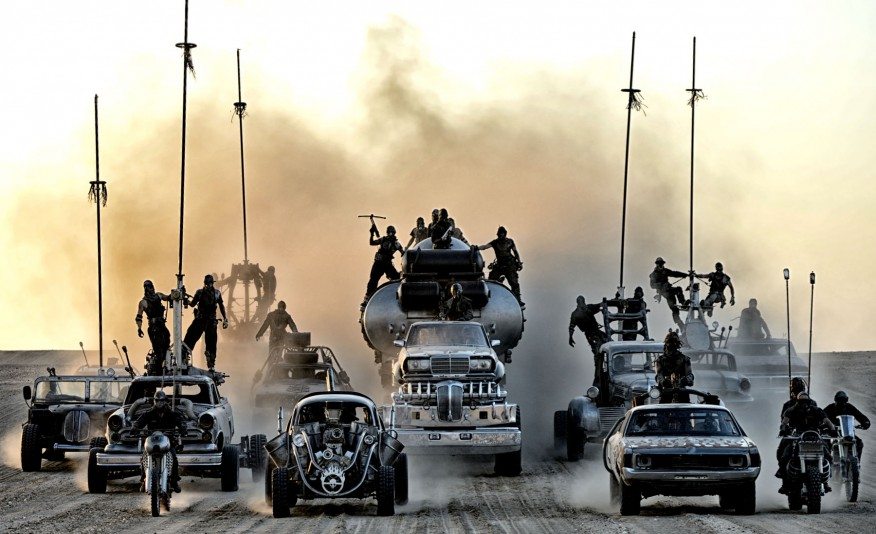 Now, 30 years later, the same director, George Miller, is back, and he is back with a vengeance. Fury Road is neither a reboot, nor a sequel or a prequel. It is a reimagination of the same dystopian universe of Max Rockatansky. Mel Gibson is out, replaced by Tom Hardy and giving his character company is Charlize Theron as Imperator Furiosa.

I won’t bore you with the plot, as it is pretty straightforward, just like with the originals. Suffice to say, it is a mad mad world, where water is scarce and fertile women are coveted for their babies. That’s all you need to know, before we delve into the vehicles.

The star of the show here is the War Rig, driven by Imperator Furiosa, and later, Max. It’s a Tatra with six-wheel-drive powered by two supercharged V8s, a 1940s Chevy Fleetmaster welded to the back of the cab, and a Beetle cabin mounted to the tanker. Witness the moment when Nux, pursued by faster and lighter nitrous-powered vehicles, blows fuel into the intake of the supercharger with his mouth. That isn’t CGI. Like every crash and explosion in this movie, it was done by some very skilled stuntmen, some of whom are Olympic athletes and Cirque du Soleil performers. 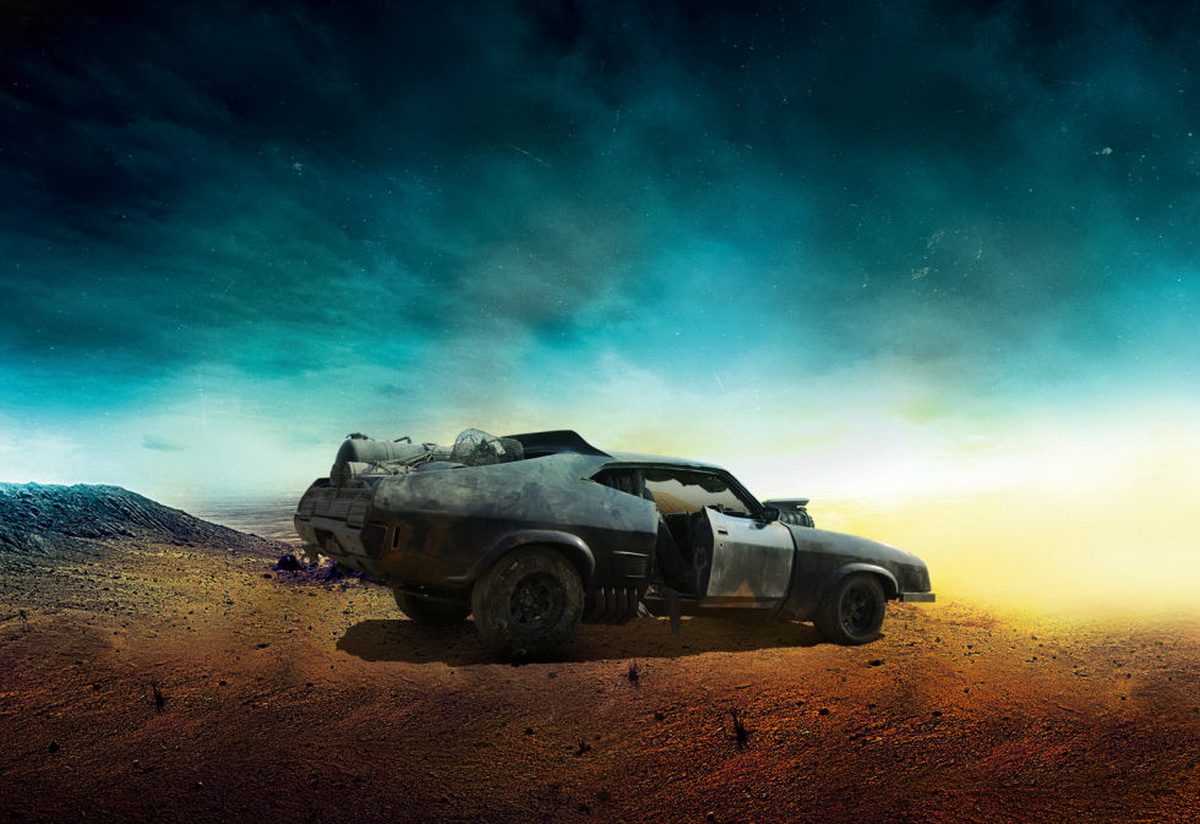 Pursuing them is the aforementioned Gigahorse and a whole bevy of vehicles you will never see anywhere else. In this world where electronics and computers have all but disappeared, old-school V8s with manual everything reigns supreme. These are worshipped as gods themselves, as evinced by the moment when the entire horde of baddies hold up their hands in a V sign.

They also worship their steering wheels, which is something we can fully identify with. These aren’t just steering wheels but an extension of each vehicle owners’ personality, tricked out in various ways.

Sadly, we do not get to see much of the legendary Interceptor this time round, save for the opening moments while Max chews on a live two-headed lizard. Or it could be a gecko. Max really has a soft spot for his V8, even screaming from between his metal face mask that it is his car. That is also something we can identify with. 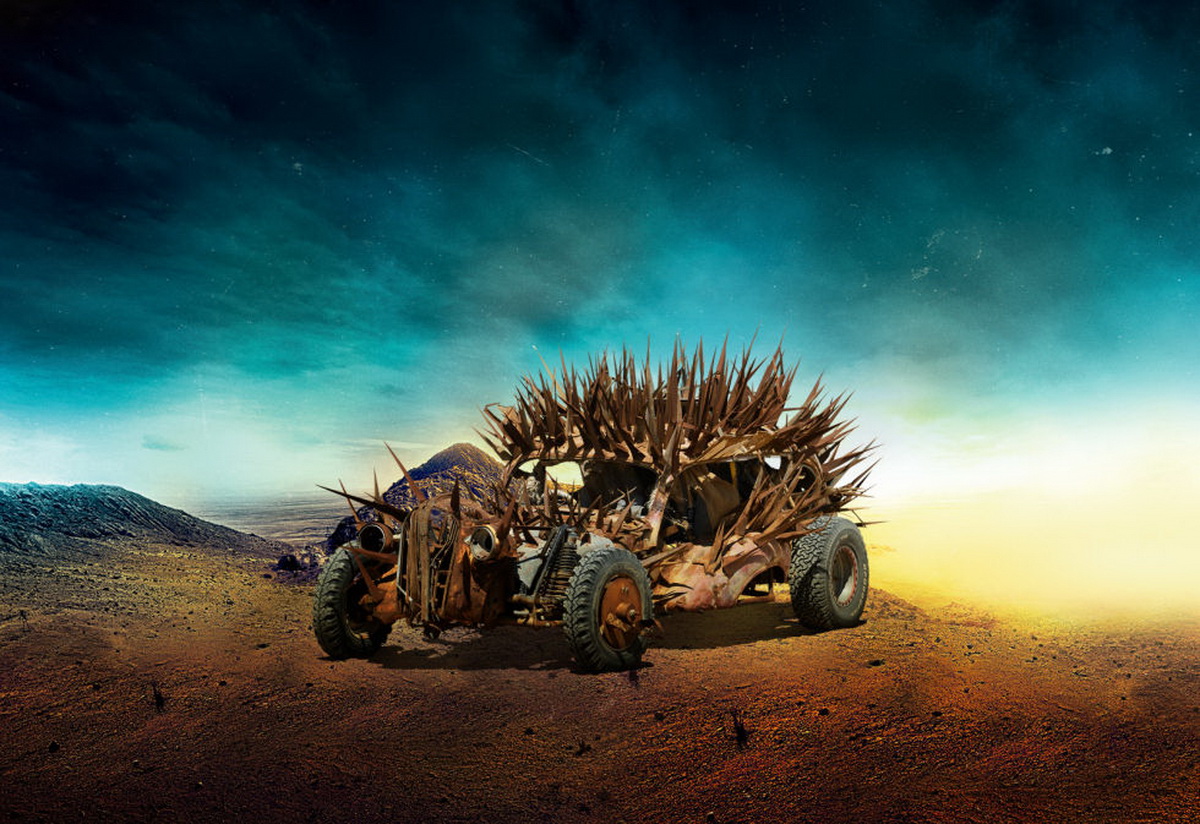 Then there are the porcupine-like late 1930’s Plymouth sedans. Topped with spikes all around, these are death machines, capable of shredding any rubber or flesh they come in contact with. But, by far, the most impressive thing in Fury Road is the Peacemaker. Despite its friendly-sounding name, this 1970s Chrysler Valiant Charger – closely related to Ford’s XB Falcon – plonked on an U.S.-made Ripsaw light-tank chassis is anything but. It ploughs through everything the Namibian desert can throw at it, and then some.

It will take us some time to list every vehicle Fury Road has, and how they enhance the visceral feel of the movie. We have a whole story here on just the cars of the movie, so that would be a good read alongside this review.

We aren’t also movie reviewers per se, but we do love good car movies here at Motoroids, and this is one of the best we have ever seen. Bullitt, The French Connection, the original Italian Job, Ronin, and the Fast and Furious series, we have devoured them all. And yet, Mad Max: Fury Road surpasses them all.

Violent and raucous it may be, but there is a beauty to Fury Road amid all this hyperkinetic madness. Every frame in this film can be photographed and hung on the wall as a testament to our love for everything that drinks fuel. There is no fast cuts and shaky cam to make up for the actors and stuntmen’s inability here. Instead everything is shot in glorious wide-angle, giving us a full view of that is happening, and what car is attacking what from where.

It is almost as if director George Miller, now 70 years old, has come back just to teach some of the action filmmakers of today (we are looking at you, Michael Bay) how action is done. Having spent the 90’s making criminally underrated children’s movies like Babe, and the 200’s making the Academy Award-winning animated Happy Feet, Miller is back to the genre that he once defined.

Fury Road isn’t just for the adrenalin junkie. Between the pole-vaulting trapeze artists and the chrome-inhaling madmen, Fury Road also makes a powerful statement about feminism, natural resources, and even religious fanaticism. But all this is done in a manner that it doesn’t deviate from the core storyline. It is never ham-handed, nor does it feel like moral advice being shoved down your throats.

There are already some rumblings from misogynistic men in the west who are claiming that Fury Road peddles feminism while advertising testosterone-fueled action and masochism. I can see where they are coming from, as Max, in a movie bearing his name in the title, mostly plays second fiddle to Charlize Theron’s Furiosa. But these misguided people have no ground to stand on. Fury Road is a timely movie, not just for its refreshing take on action, but for its subtle yet powerful messages.

But above all else, watch it for the vehicular mayhem. And watch it in the biggest theatre you can find. Trust us, it will be worth it.