Every petrolhead worth his penny has been a fan of it. Be it setting the streets on fire in umpteen racing games or getting a poster of it to adorn the walls of bedrooms. The Mazda RX-7 is a legend through and through. Its legendary is best described by tuners who swear by its name all around the world. The particular Mazda RX-7 which is in focus here is the third generation RX-7 which was famous for its rotary engine and FD3S chassis. Such a potent combination made it an instant hit and put it well ahead of the curve. We came across this video on YouTube and after researching more about this Triple Black Mazda RX-7, we came to know that it isn’t just menacing to look at but is a proper hoot.

It’s owned and built by a certain Adam and he has pimped up his ride with everything he thought he could put it in. We wouldn’t say that it’s riced because all the mods that this Mazda RX-7 has been through, actually work and make it an all-black fire breathing dragon. The car has gone under certain modifications, both aesthetically and mechanically. The standard twin-turbo setup was pushed to the limit almost right away. In the stock guise, the  Mazda RX-7 puts out around 326 HP but Adam swapped in a single turbo setup, running a BorgWarner EFR 7670 with a custom-built super short manifold. This bumped up the power output to a respectable 400 HP. But as they say, the more power to put down on the road, the better. Hence, he didn’t stop here and tried a new EFR 8474 .92 internal gate set up and after many attempts, he managed to bring the power output to it’s current 550 HP standing. 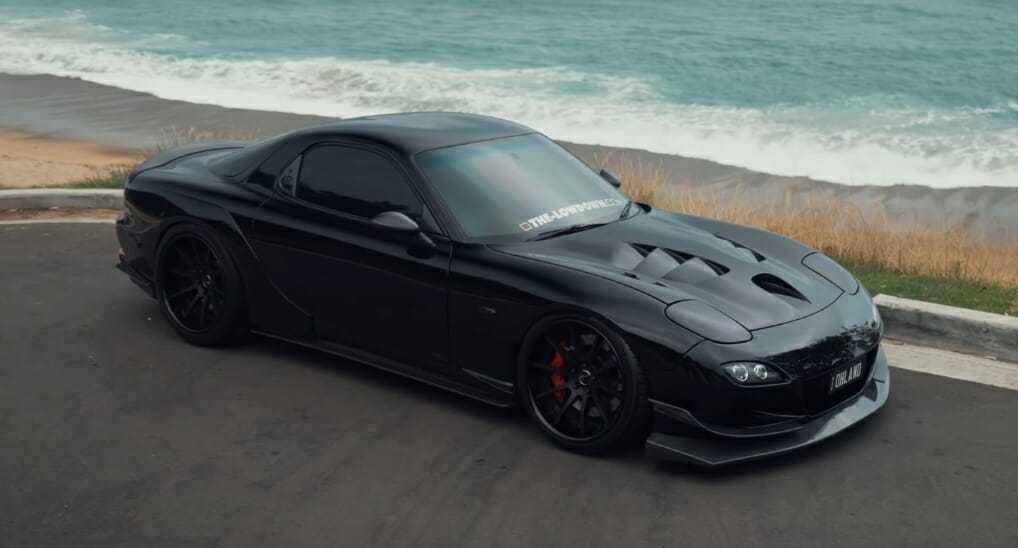 In the words of the man himself “I enjoy the car as much as I can. It was never meant to be a show car. It was built to be a streetcar that gets enjoyed on a regular basis.” They say that we should preach what we say and Adam has done just that as he has clocked more than 60,000 kilometres on the Odo in his 10 years of ownership. Adam is a graphic designer by the day and a car builder by the night. This actually reflects in his Triple Black Mazda RX-7 as it is very aesthetically appealing. It runs with the popular FEED widebody kit and in its all-black avatar, makes the car look even more humongous. There’s a SCOOT vented bonnet to provide necessary ventilation to the fire breathing engine underneath. The rear looks equally aggressive with a Sanai Works rear diffuser and canards. Topping off the boot is a Shine Auto Project carbon ducktail. He has tried four different front bumpers on this car alone and has finally settled on the bumper seen in the video.