Home Features Our Experience At The Mahindra Adventure Camp Out

Mahindra Adventure recently conducted a camp out at Amarsar Camp located at Amarsar Village near Jaipur. The drive was planned from Rajshree Resort located on the main Jaipur Delhi road N.H. 8, at Chandwaji village to the Amarsarcamp. The key highlights of this off-road camp out were the night stay in tents, barbeque dinner and off-roading in the night. 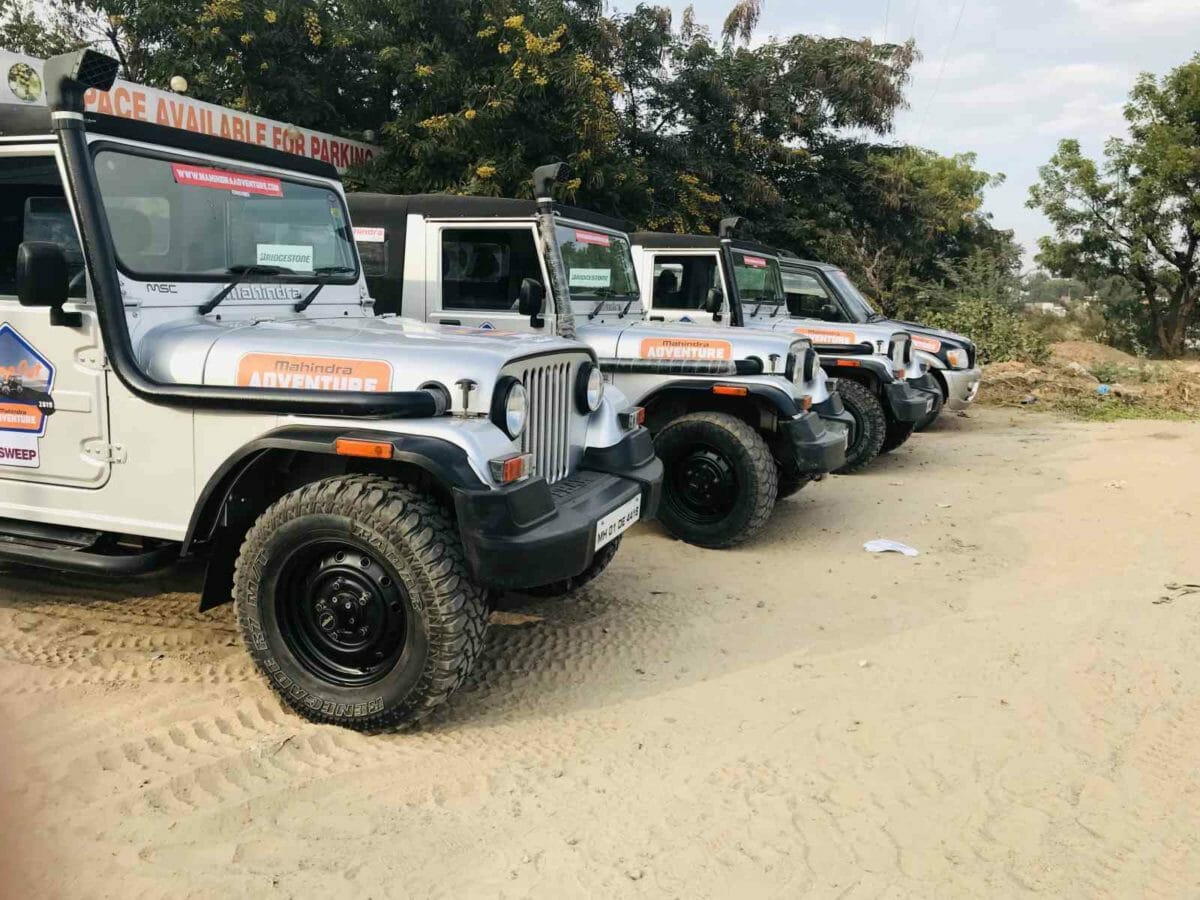 The invites were supposed to gather at Rajshree Resort which is nearly an hour’s drive (51.1km) from the city of Jaipur. The drive was planned through rough terrain which was almost a 1.5 – 2-hour drive to the camp. Although, one may take the proper road to the camp too which probably may take up to 40-45 min to reach there. However, since it was Mahindra’s Adventure event, taking the easy way isn’t an option for an off-roader. Therefore, Mahindra brought their own set of tricked out Thars, which were offered to the invitees who drove in their cars which were not meant for such terrains.

Also Read: The Mahindra Marazzo And Its Attributes As A Long-Distance Vehicle 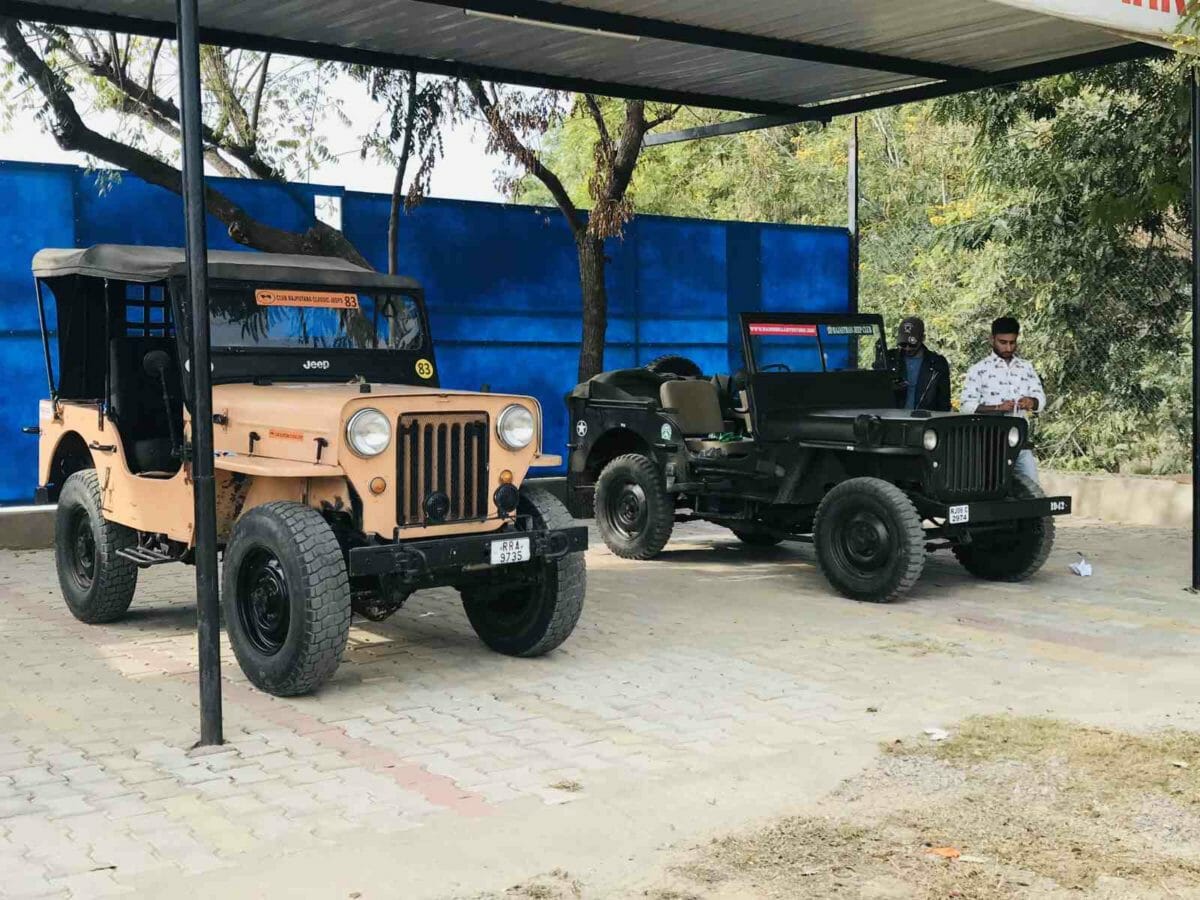 A few invitees who owned Mahindra jeeps preferred to take control of their own machines. Some of them even brought along variety to the mix in the form of a Willys 2 (low bonnet), Old-gen Thars, and the Di. Most of the participants were members of the Rajasthan Jeep Club. By the time we arrived at the starting point (Raj Shree Resort) we witnessed very few participants, but the excitement grew higher as people started lining up their rides and gradually the entire fleet was ready to go off-road. As a part of standard procedure, there was a short briefing conducted by Mahindra Adventure officials (Ryan Lee and Raj Rathore) about the terrain and its rules served with a warm cup of tea and biscuits. 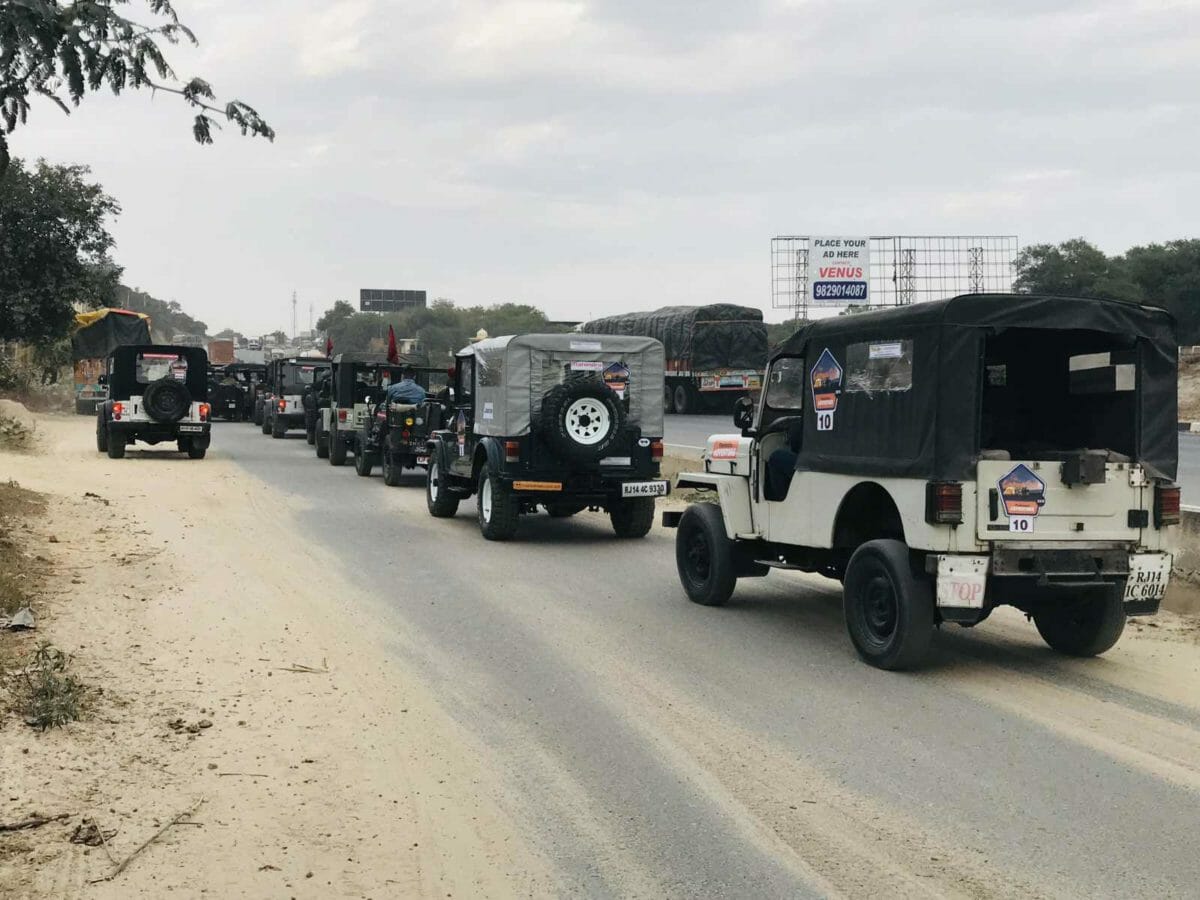 As soon as it got over, the rush began to set up the rides for the terrain. Everyone was busy capturing the moment of excitement by posing with their rides and fellow travellers. And then the adventure began. In the Lead was Ryan Lee and Raj Rathore in his Mahindra Scorpio, followed by almost 20-25 jeeps which were followed by a Sweep vehicle which belonged to Mahindra officials. To cover the experience, we were handed over a Mahindra Thar. As soon as we hit the kind of terrain the Thar loves, our excitement was through the roof. Since we were riding a soft top, the dust was able to find its way in and the bumps were making us hit the roof (in the backseat), but none of it mattered as we were drenched in excitement. Riding in a true off-roader which was hauling the dust made of nothing but soft sand was nothing less than mesmerising. 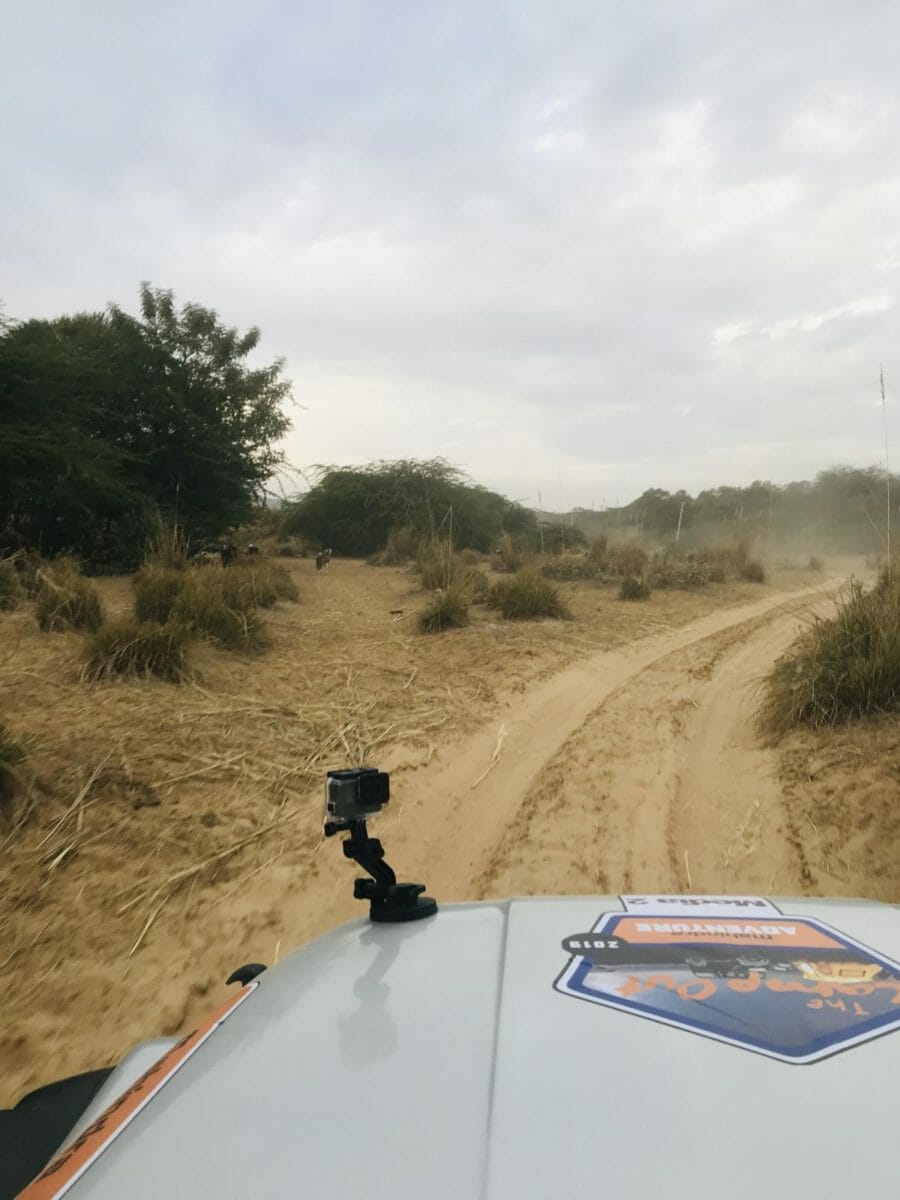 We were savouring the experience although we were being coated in dust and the cold weather was freezing our nostrils. The beautiful landscape surrounded by mountains, where no roads were meant to be followed made us a part of the terrain. After an hour and a half’s drive, we reached our destination – the Amarsar Camp, set up next to a farm. 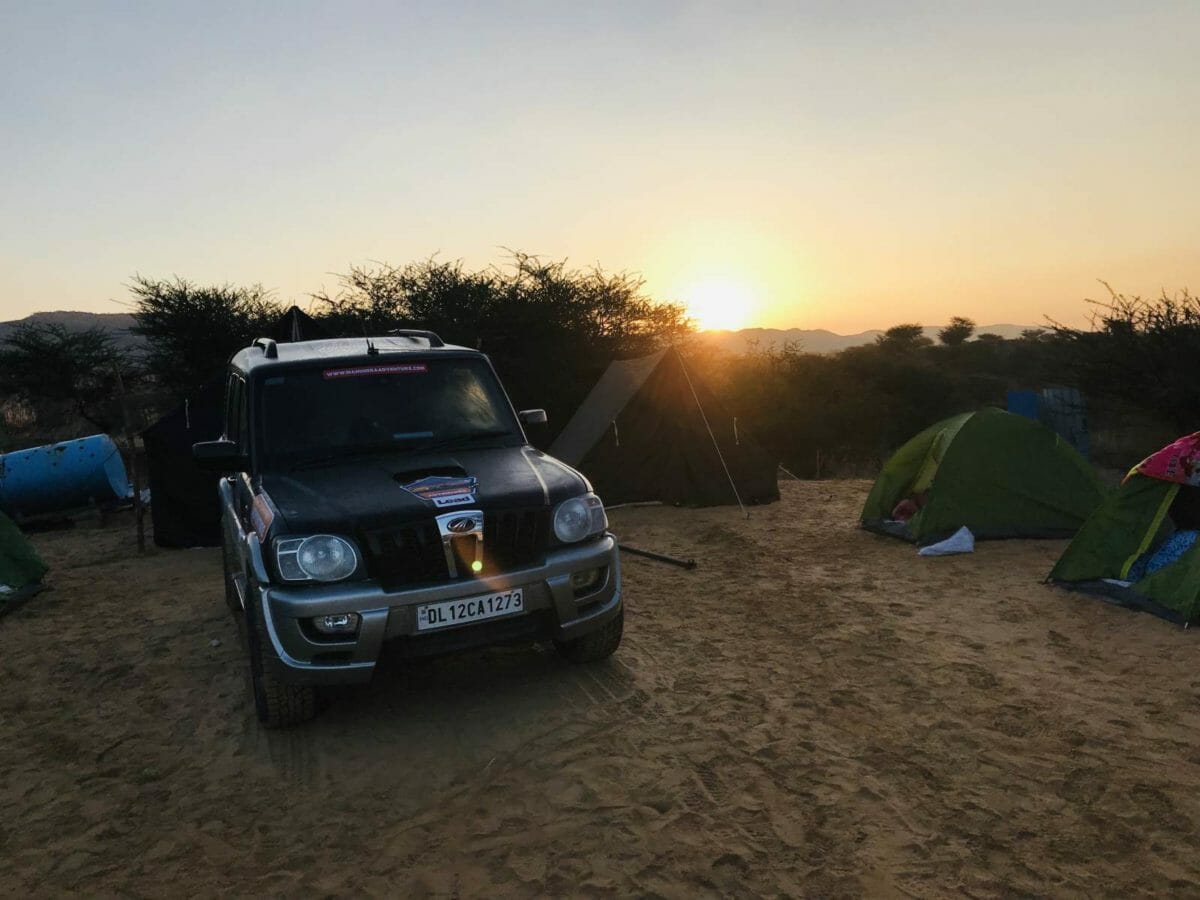 It was dark by the time we reached there bu the adventure was not over, yet. After a round of snacks, there was a call for sand bugging in the dark. While at it, unfortunately on one of the tough inclines, our ride’s clutch started to burn a little and we had to put a stop to our joyride. But the fun was not over yet since we were not too far from where the action was and we walked on the soft sand to experience other drivers making adventurous attempts to drive through the tough dips and inclines. 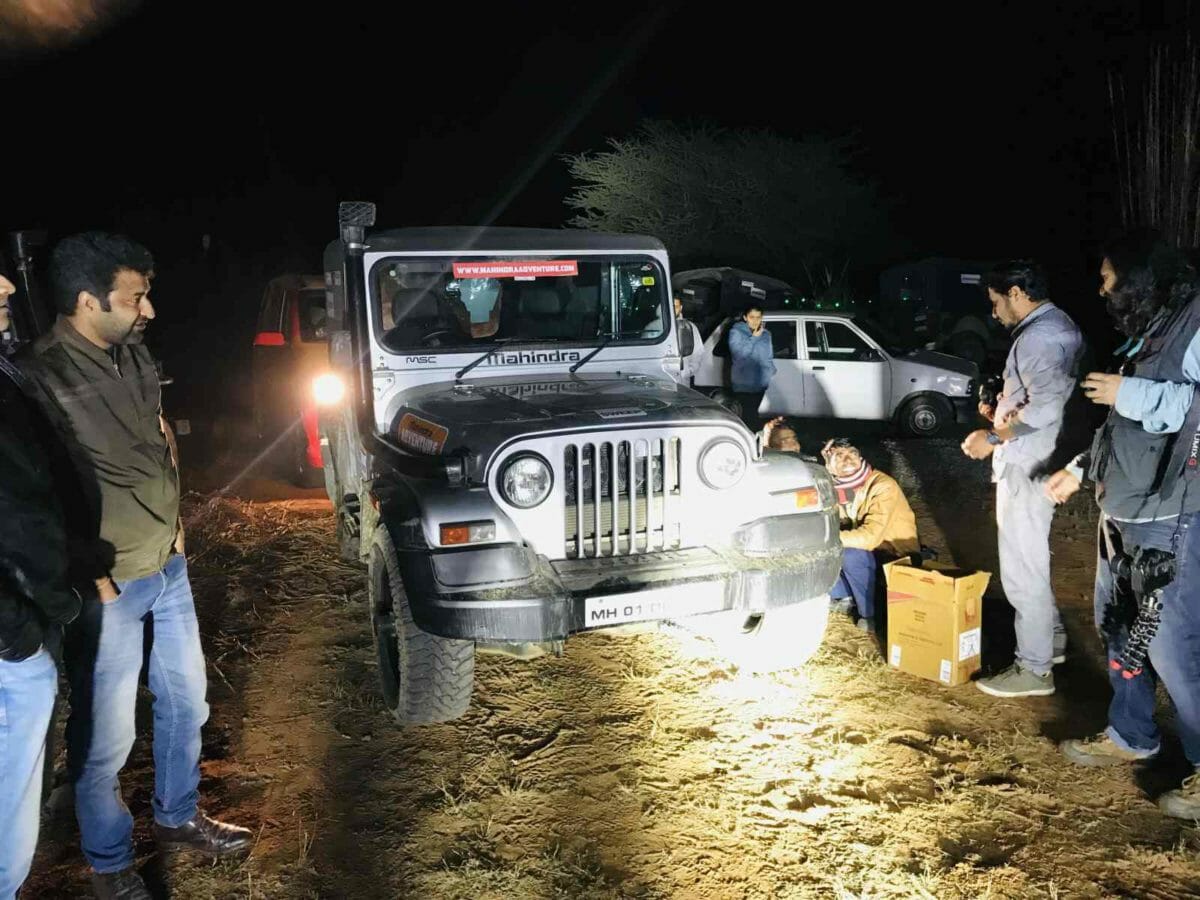 After about an hour or so, by the time the clutch plate of our ride cooled down, we returned to the camp for more fun and mingling with fellow participants about the experience of the terrain we drove through. Whilst we were admiring the cosy setup at the Amarsar camp, a music box to let people indulge in karaoke and swing a leg to the music added more flavour to the evening. As the night passed through, those travelling with families crawled into their tents but for the rest, the night continued with more music and conversations about off-roading. 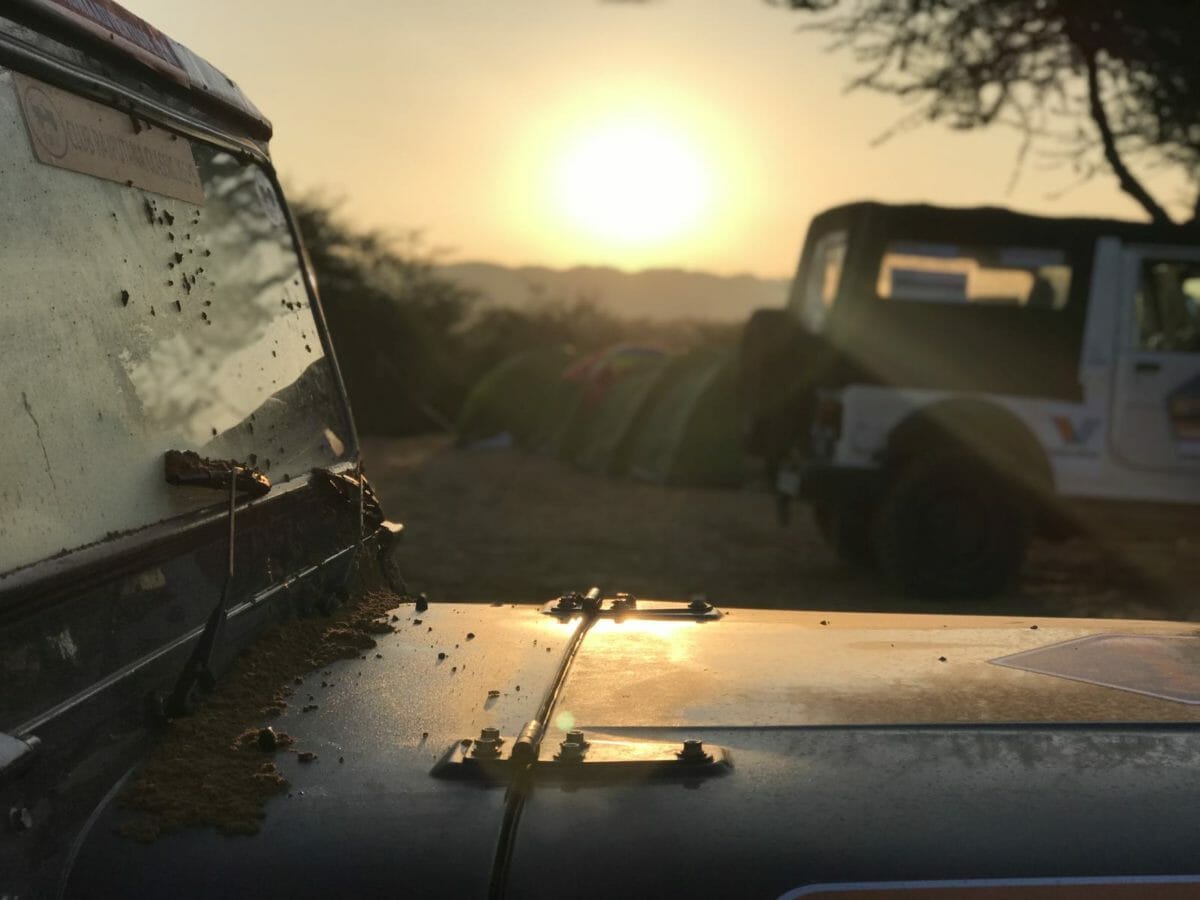 The next morning, since it was freezing, as suspected, very few crawled out of their tents. The sight at the site was beautiful though, with all the jeeps parked around the camp with a massive farm in the background. On this note, the trip concluded and we set off from the camp to head back to the point from where we started. A big shout out to Ryan Lee, Raj Rathore and the Mahindra Adventure team for organising the event and inviting us to be a part of a unique experience. If you too would like to be a part of something similar, do visit Mahindra Adventure’s website to follow their calendar.