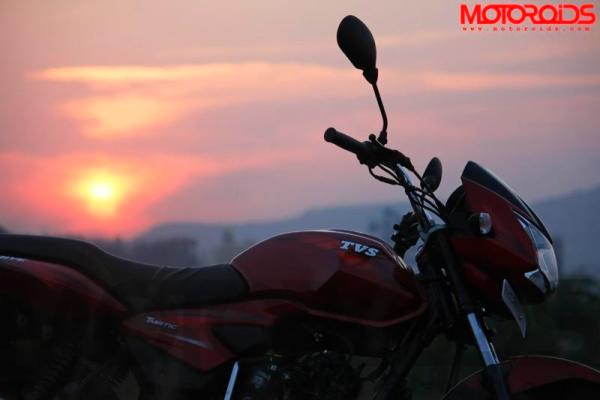 A few days ago, I got a chance to ride a “fun” bike. This was a bike which made me learn what I thought I already knew!  – Motorcycling, I thought I knew it well considering that I had some amount of riding experience on a plethora of machines.

Cut back to the bike being discussed – The “No Tension” bike, the TVS Jive!

Firstly I would like to congratulate TVS Motors to come up with a neat ‘new’ product. I hope this innovation trickles down into the bigger siblings as well. A few months ago, Amit decided to let me try the Jive. I guess the nickname SuperCommuTOURer worked for me. Little did I know what I was venturing into! A bike that will teach me so many things right from the time I first sat on it.

All geared up, time to go to office, the elder brother RTR and the competitor R15 waiting for me, almost like competing against themselves. I am sure they got surprised that I chose the smaller bike. My first reaction on the bike was (and I am being honest about it) I try to engage the clutch only to find it not there, and in the process making a joke of myself! There my first lesson with the bike!

Well, Hinjewadi the IT SEZ of Pune has adequate arrangements to arrange a traffic jam every morning. Today was nothing new. I shift to Neutral and wait, and then plonk the gear and trut along. Just the way it’s supposed to be right? – WRONG!

That’s the fun part of the bike, stop it in any gear, and begin riding from that gear. For all logical reasons you would be launching from either first or second gear in standstill traffic, but just to let you know, we did push it to the limits. The bike was torquey enough to pull me and my friend from ANY gear. Wow! – No tension!

It took a while but then I realized how it works, and it was fun even in the insane traffic.

TIP: Consider it to be a scooterette and stick to second gear and trut along the traffic – you will never need anything else to cut the traffic.

Earlier in the day I realized launching the bike is very much like a scooterette, plonk the gear (and look stupid as it isnt moving, well atleast I lookedstupid) Throttle, and its comes alive!

Night riding with bike was “No tension” as it has very good reflectors. The suspension is a bit spongy, but it is something expected for a bike in this category.

The seating position is comfortable and the braking is normal, nothing exceptional in this department. All in all, it’s a VFM bike, and yet is special! 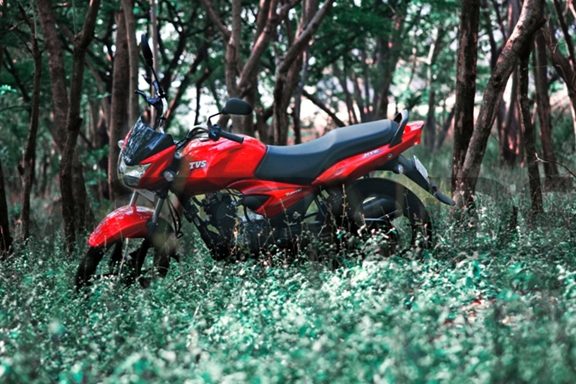 It didn’t take me long to finish 100KMs on the bike, it had automatically become the weapon of choice for the city rides. Much more stylish than the scoots, much more usable, and hell loads of fun! By now I had mastered the art of knowing when to upshift, and when to downshift on the bike, so I could comfortably navigate through traffic or crazy city folks leaving behind the much bigger bikes.

Tip: Since there is no clutch, you have to be nice with the down shift. If you are one of those mad down gearing people (me, me … me) who downshift all the time to remain in the peak power band, then beware doing so on the Jive would mean a nice little wheel lock and a small drift. The bike is light, and stable which helps a lot in controlling the bike in such a instance. It’s a matter of getting used to it, and about 50KMs is all it takes at the most for anyone to learn when and how to shift down.

So how much did I ride the bike?

A cool 1300Km! This bike is THE weapon of choice for city ride. I guess that where the review ends… No crazy Motoroids stuff on this one….eh?

Nyah! To celebrate the 1000KM on the bike, I took it to Rajmachi. A place which is considered to be a crazy and one of the MOST exciting off roading stretches in this part of the world. More to come about this experience on the forum.

What I liked in the bike?

Its Torquey, a perfect upgrade from any scoot, it’s a neat “fun, no tension” tool to ride in the city.

Is it good enough to be a starter\learner bike?

– Clutch control is considered to be one of the most important things to know when you are learning to ride a bike, infact most of the RTOs around only seem to see if you can launch the bike into the gear. With the jive there is no clutch to control! Can’t get easier than this!

Well I could not find a lot of flaws in the bike!

There were a few things that are like small tidbits that I found using a super charged electron microscopic vision.