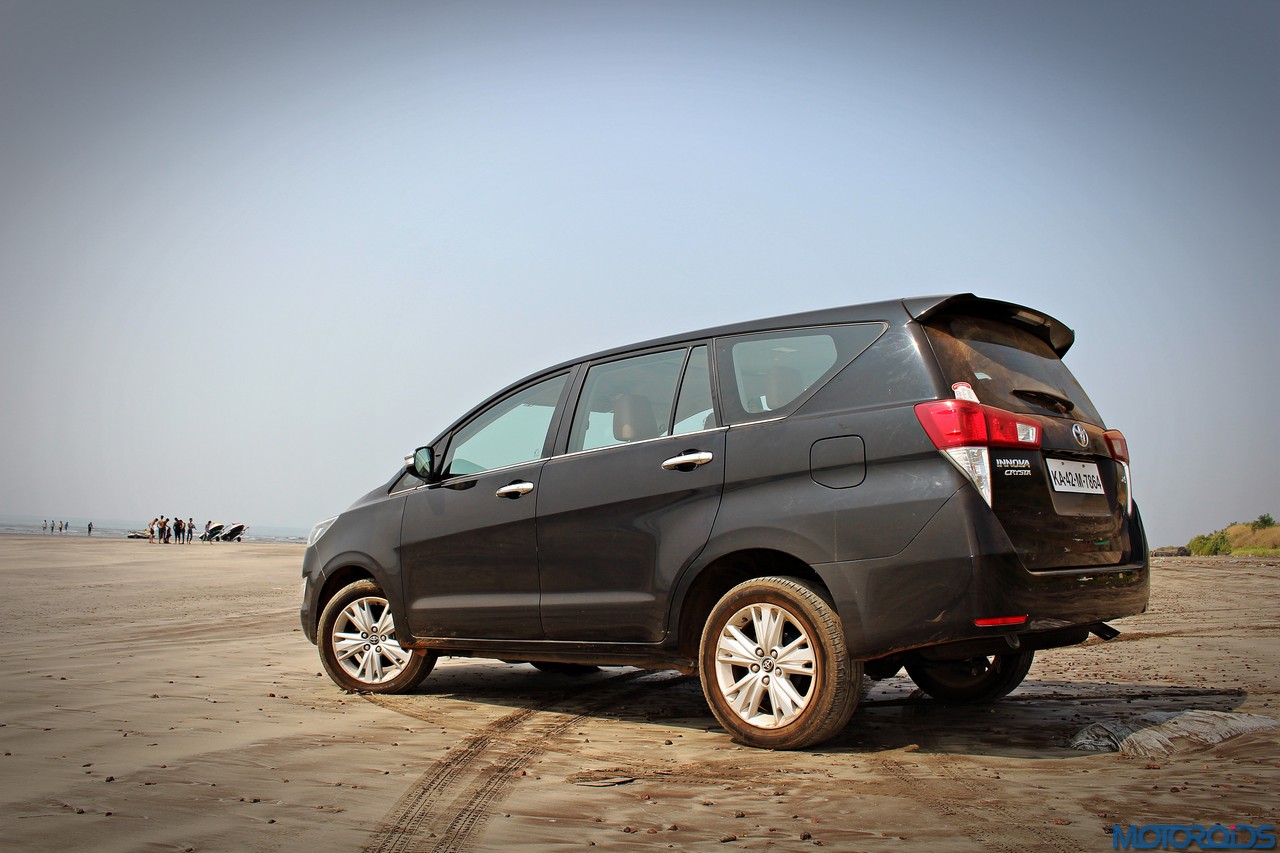 I remember stories of how my family used to travel across the length and breadth of West Bengal in their rusty (and trusty) HM Ambassador; a couple of toddlers stowed away on the parcel shelf, and seven adults snuggling on the sofa-like seats without creating a fuss. 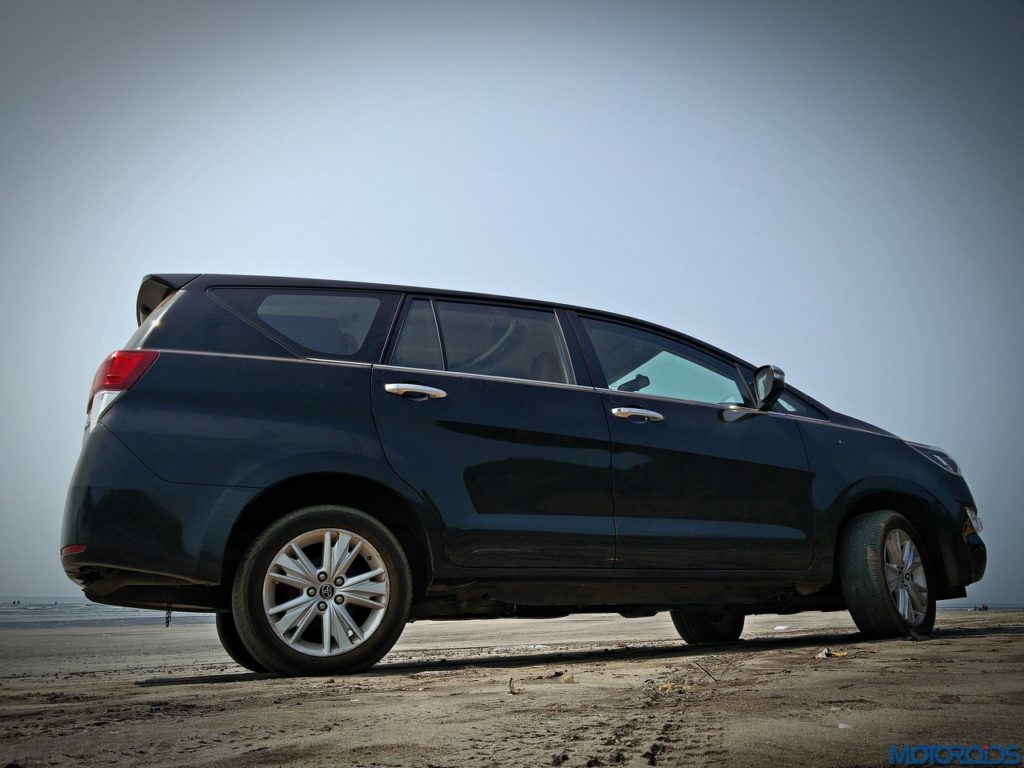 Before you scoff at the blatant ignorance as per safety is concerned, let me remind you that in those days, people clamored less. Bless the lack of internet for that. Suddenly lives have become precious, but we know for a fact that they haven’t. Suddenly your banter has become a center of a supposedly sexist/racist storm, but we know for a fact that’s it all in good humor.

So a couple of toddlers stowed away in the parcel shelf of a car hurtling towards the tea estates of North Bengal were just fine. The world had (and still has) bigger problems to worry about. Anyways, today, if you want to go out on road trip with friends or family, there are enough transportation devices at your disposal. 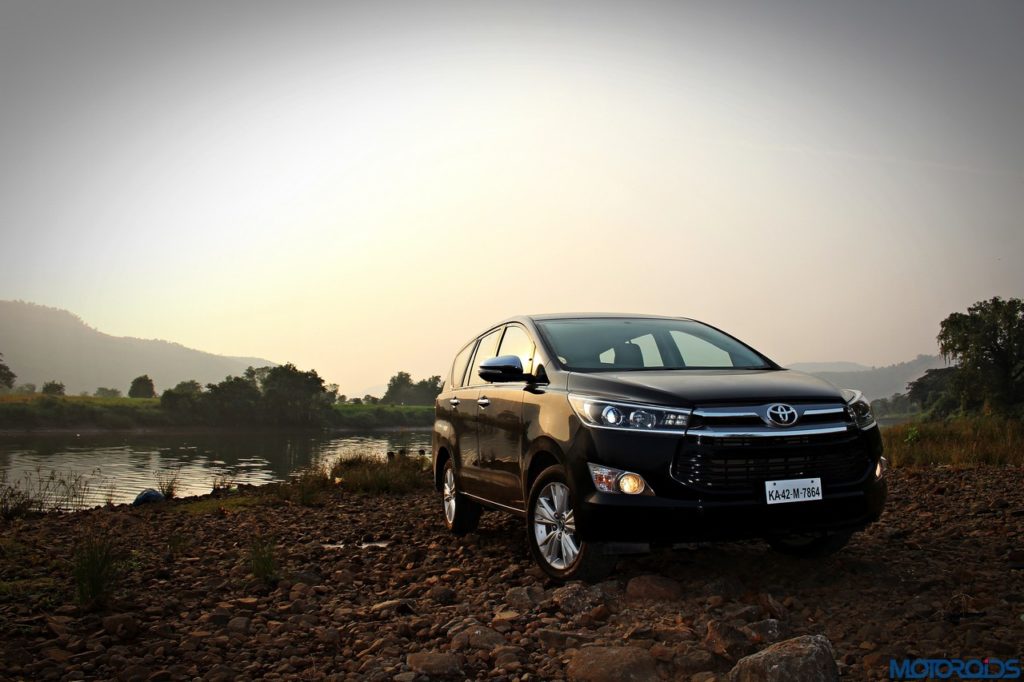 Like the formidable Toyota Innova Crysta. So we took one for a road trip from Mumbai to coastal Dapoli, with the entire Motoroids team in tow, because we can. We started our journey from Mumbai early one morning, aiming to steer clear of the traffic that would be building up soon. Before that, I took a minute to soak in the appearance of India’s most popular people mover.

The MPV isn’t particularly handsome, but it does have a great road presence. The front end makes quite a statement with its serpentine trails of chrome and those impossibly long headlamps. Unfortunately, the rest of the vehicle’s design comes off as a bit lackluster, with its vast swathes of sheet metal. 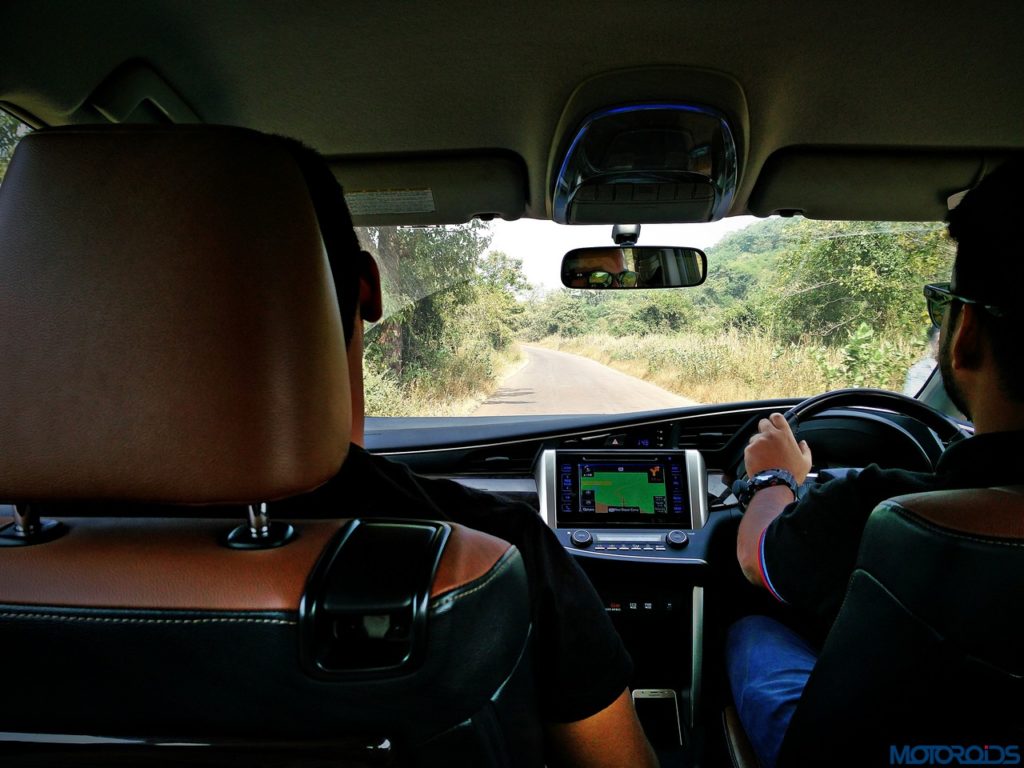 We got on the road, and straightaway, the luxurious interiors struck a chord with us. The tan leather upholstery looks like a million bucks, and the shards of wood give off a distinctly posh vibe. Of course, things were a bit special because our car was the top-spec 2.8 Z variant.

First-timers inside the Innova Crysta were swept off their feet, considering their expectations had been numbed down by the utilitarian interiors of the outgoing model that had probably shunted them for some forgettable airport run. 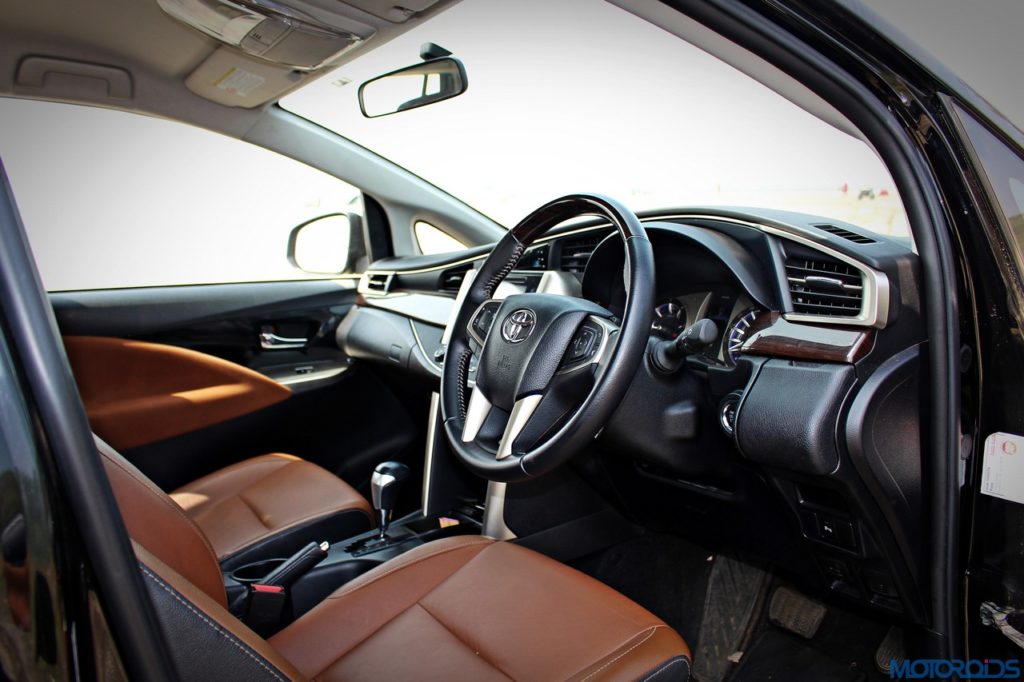 As for me, I had already penned in my review that I won’t mind staying inside the Crysta given a choice, and I still stand by that. There’s no dearth of room inside the cabin, and the choice of materials make it a very uplifting space inside to be in. There’s chrome on the inside door handles, and the door trims are all done up with large tracts of matching brown/black suede, which feels terrific to rest your elbows on.

The Captain’s Chairs in the second row are excellent bits of kit, with terrific back and thigh support. They’ll recline so that you can grab some shut-eye, and when you wake up, the tray tables stuck to the back of the front seats ensure that you don’t spill your meal. You’ll have a hard time waking up though, because the sun blinds won’t let you. 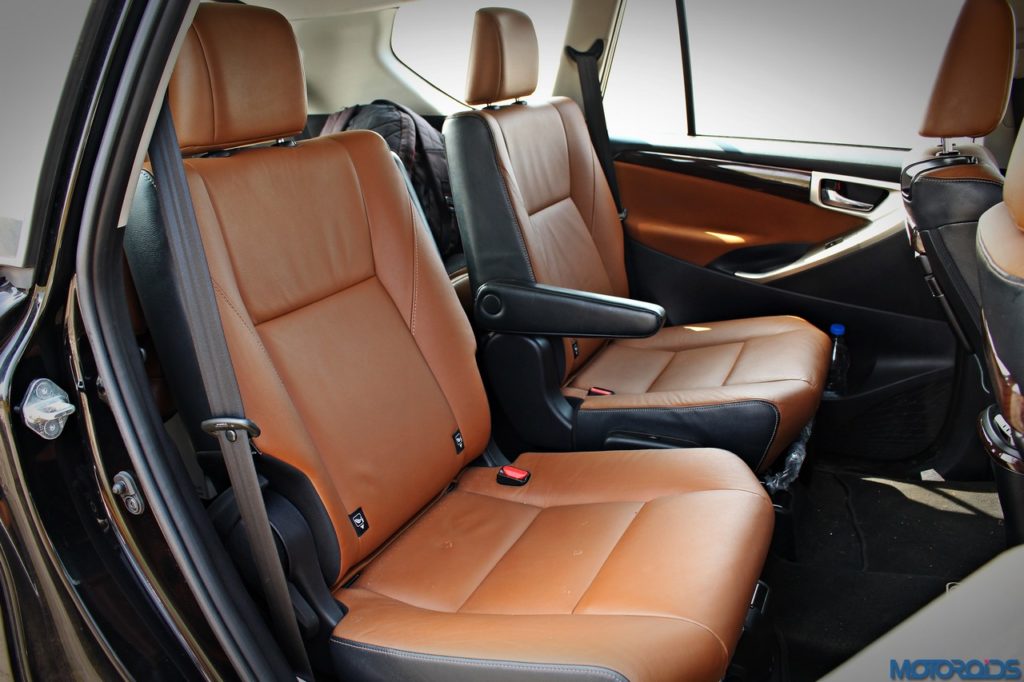 Up front, the seats are comfortable enough to put a baby to blissfully sleep, and the vast expanse of a dashboard is always a pleasant sight considering it’s beautifully designed. Especially the thin aluminum strip that marks the alluring curvature of the dashboard’s top.

The sexy instrument cluster feels like it’s chiseled out of a single block of aluminum, and the MID between the dials present more information that you need. If you still want more, the large, 7-inch touch screen in the middle will adhere to your demands. 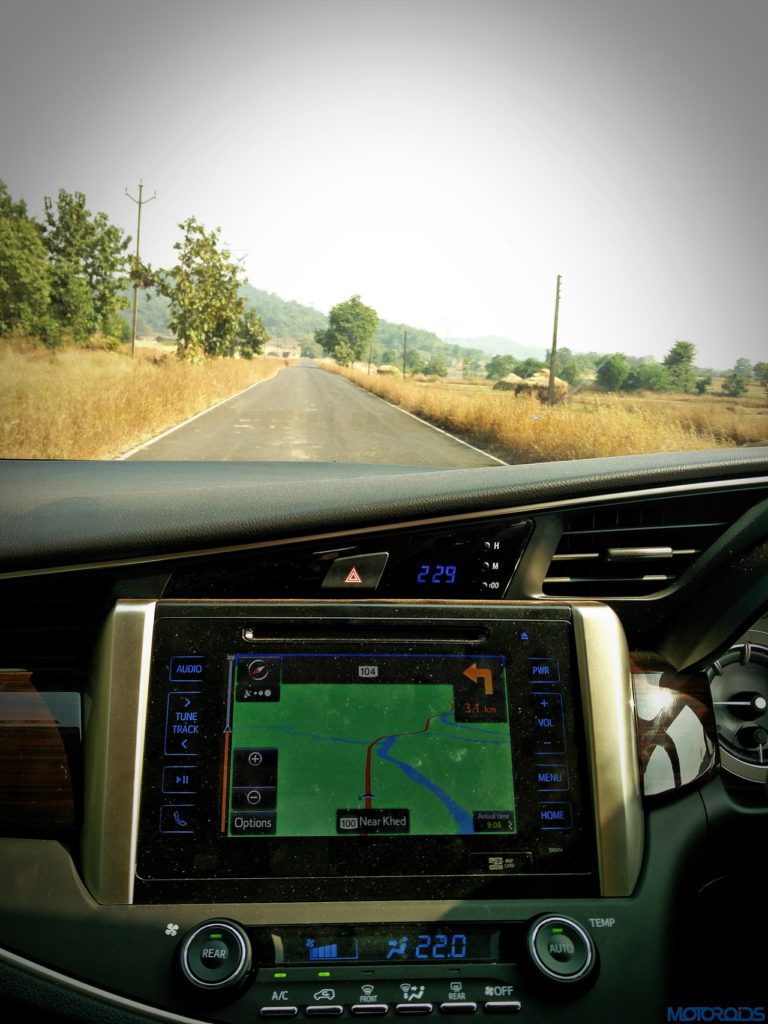 The steering wheel is relatively large (a bit too large for my liking), and trimmed with wood, along with leather. It does feel great to hold though. Ergonomically, the new Innova Crysta has all the right boxes ticked. In spite of the huge cabin, all the controls fall easy to hand, leaving you with no cause for complaint.

All throughout our journey, three things gave us good company – the in-built navigation feature, the automatic climate control with vents in each row, and the lastly, the six-speaker audio system that played the tunes of our choice with great punch, courtesy Bluetooth connectivity. 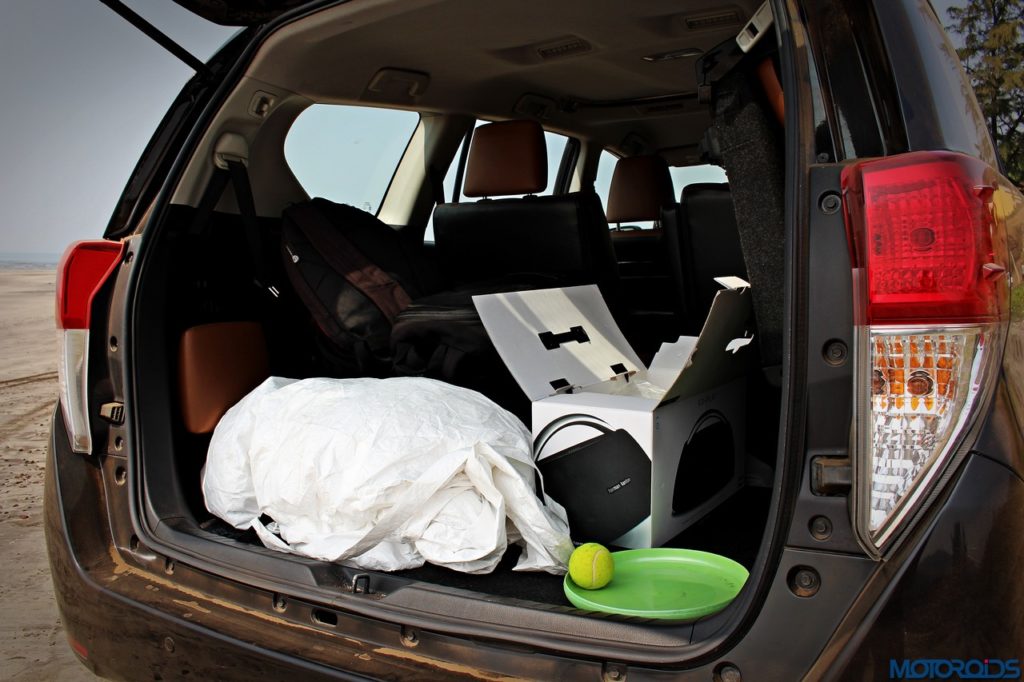 Then there’s the storage space inside. Get this – the new Innova Crysta has space for not five or ten, but as many as twenty bottles! Each door bin has space for three bottles; one 1-litre bottle and two 500 ml bottles. There are two glove boxes in the dashboard; with the upper glovebox being cooled and both being illuminated, and an assortment of cubby holes all around to store knick-knacks.

There are also a couple of retractable drink holders on either side of the dashboard, with both drinks getting cooled by their strategic placement in front of the side air vents. Its features like these that make the new Innova Crysta such an effortless road runner, keeping the occupants charged and refreshed. 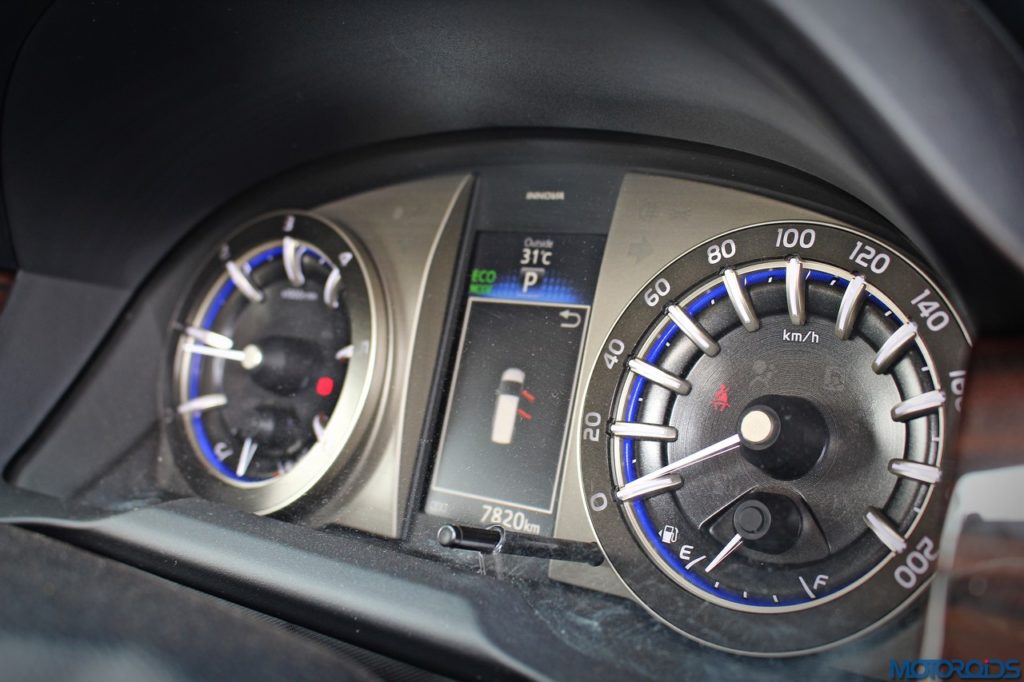 We took turns at driving, just to let the team get a feel of how Toyota Kirloskar Motor’s new money spinner drives. And needless to say, they came away impressed. Over the narrow, undulating state highways leading to the beaches of Dapoli, the Innova Crysta maintained its composure like a trained fighter jet pilot during a mid-air skirmish.

The ride quality is charming enough for the class of vehicle, and will readily put the rear passengers to sleep on a long-ish journey. 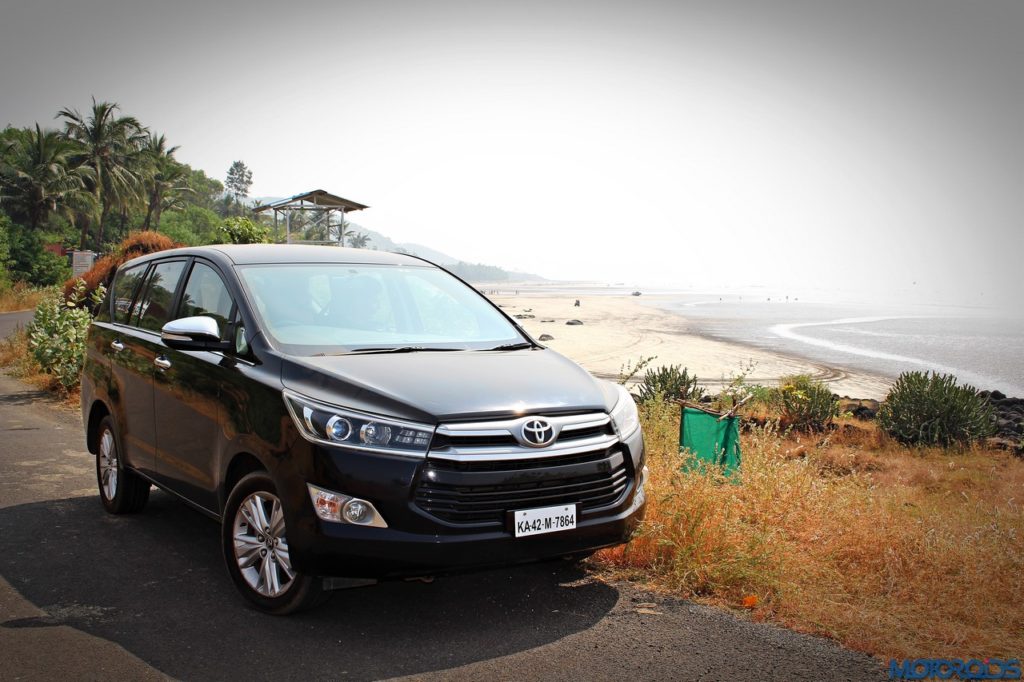 As for the 2.8-litre diesel engine, that’s nothing short of a workhorse, and a refined one at that. NVH is well contained, and there’s barely a whisper from the oil-burner during normal driving conditions. Put your foot down though, and the engine makes its presence felt inside the cabin. Don’t expect it to be too frugal though, as even with a light foot, we averaged 10 km/l or thereabouts.

Performance is more than enough for Indian roads, even though the six-speed AT, exclusively available with this engine, tries to sap a bit of grunt. That’s an inherent AT thing, and in any case, the shifts are smooth and barely perceptible. In case you’re up for it, there’s a manual mode that lets you shift yourself. 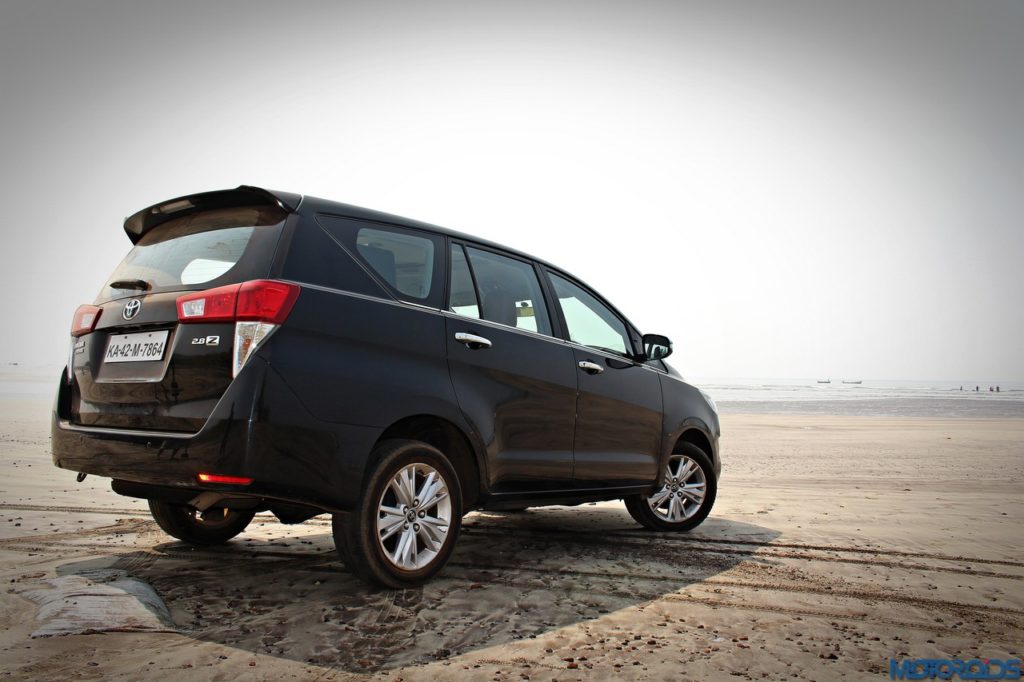 As we snaked through the forested roads leading to Dapoli, the creature comforts kept us smiling, and the effortless performance kept the one at the wheel grinning. Steering the new Innova Crysta needs some extra muscle, as the rack is quite hard. Taking tight U-turns is a bit of a workout, given the hard steering feel and the large turning radius.

We reached Dapoli right before sunset, settled into our cozy home stay and later headed to the beach. Dapoli’s beautiful, given its virgin beaches that are clear of tourists (mostly), and its calm waters that encourage dips that can last for more than a couple of hours. Sunsets are cinematic, with the red and orange tinted sky spectacularly meeting the watery horizon. 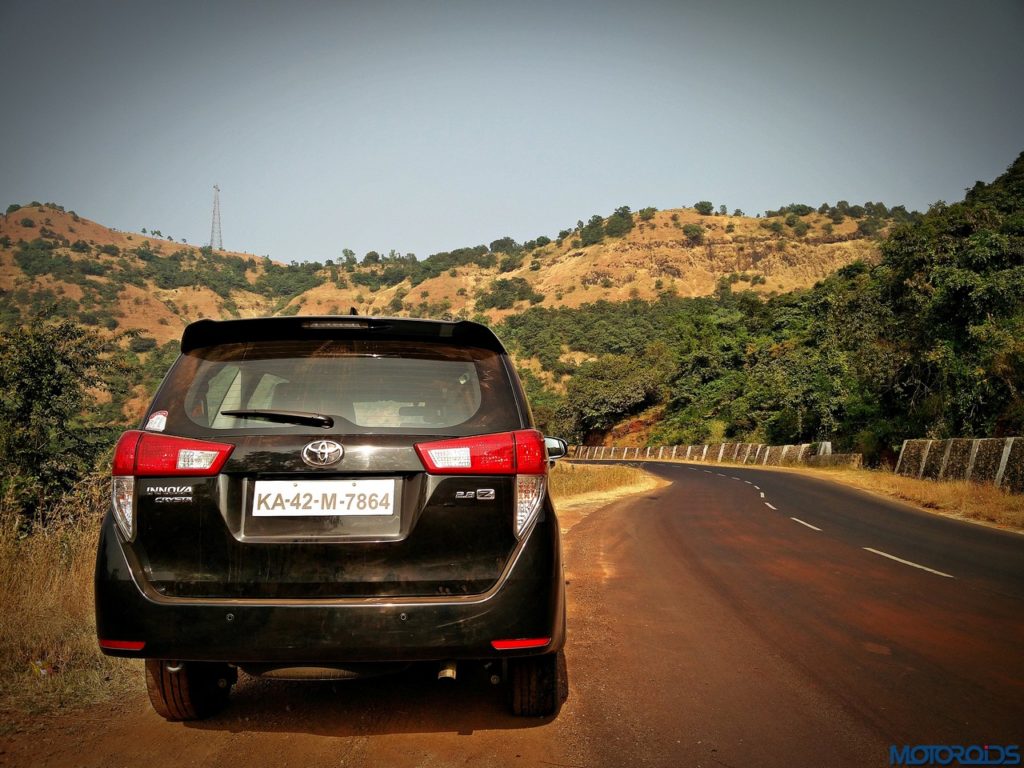 After an elaborate barbeque party on the beach, we headed home early next morning, this time taking a more scenic route through the town of Chiplun (on the Mumbai-Goa road). This route had some curvy roads where the Crysta demonstrated its predictable and affable dynamics. Night time driving in the Crysta is a different experience in its own, as the ambient lighting comes into its own. 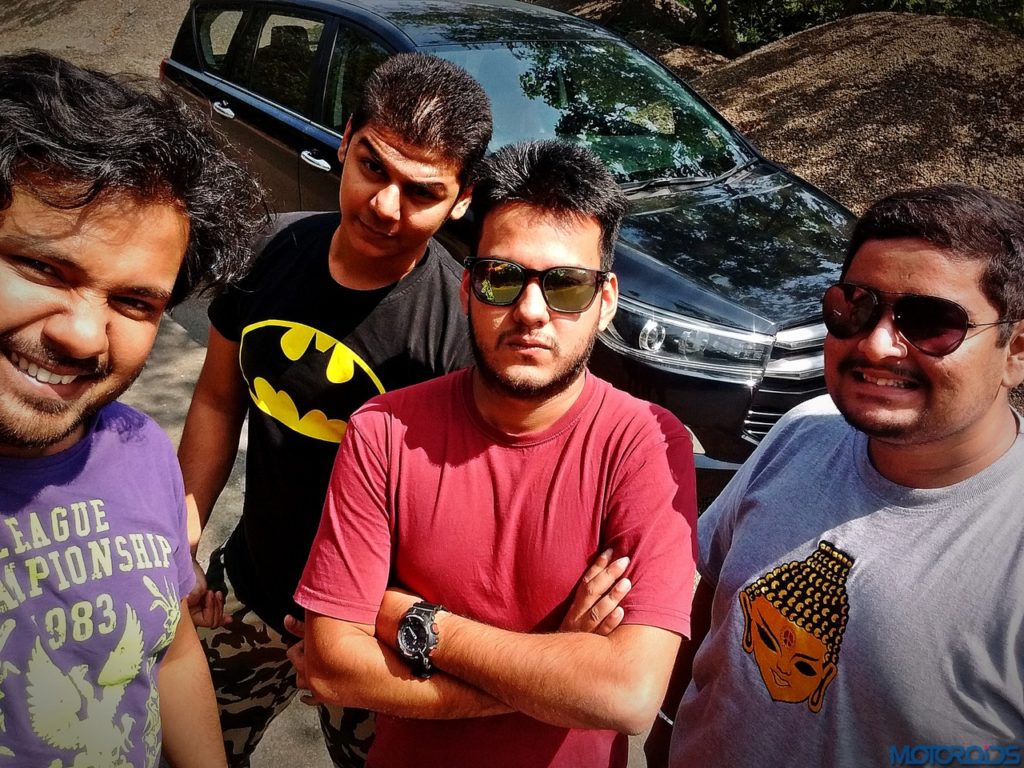 All in all, the new Innova Crysta proved to be a worthy companion for the team trip, and showed us the reasons why its India’s most popular and desirable people mover.