Skoda, pronounced Shkoda correctly, and Sakoda in most parts of Punjab, entered the Indian market with the Octavia which instantly took the market by storm as no other car at that price offered similar power and driving experience. I wanted to sell my neighbour’s kidney to get the Octavia vRS at that time. Alas, I could never successfully lure him to my house for a dinner to execute the plan. Skoda, however, since, have expanded their line up and upgraded their cars fastidiously. Carrying on with the tradition, before the dust on announcement of the new Octavia vRS could settle down, Skoda is brewing up a storm again with a completely new product, entering the lucrative 7-seater SUV segment for the first time with the Kodiaq. 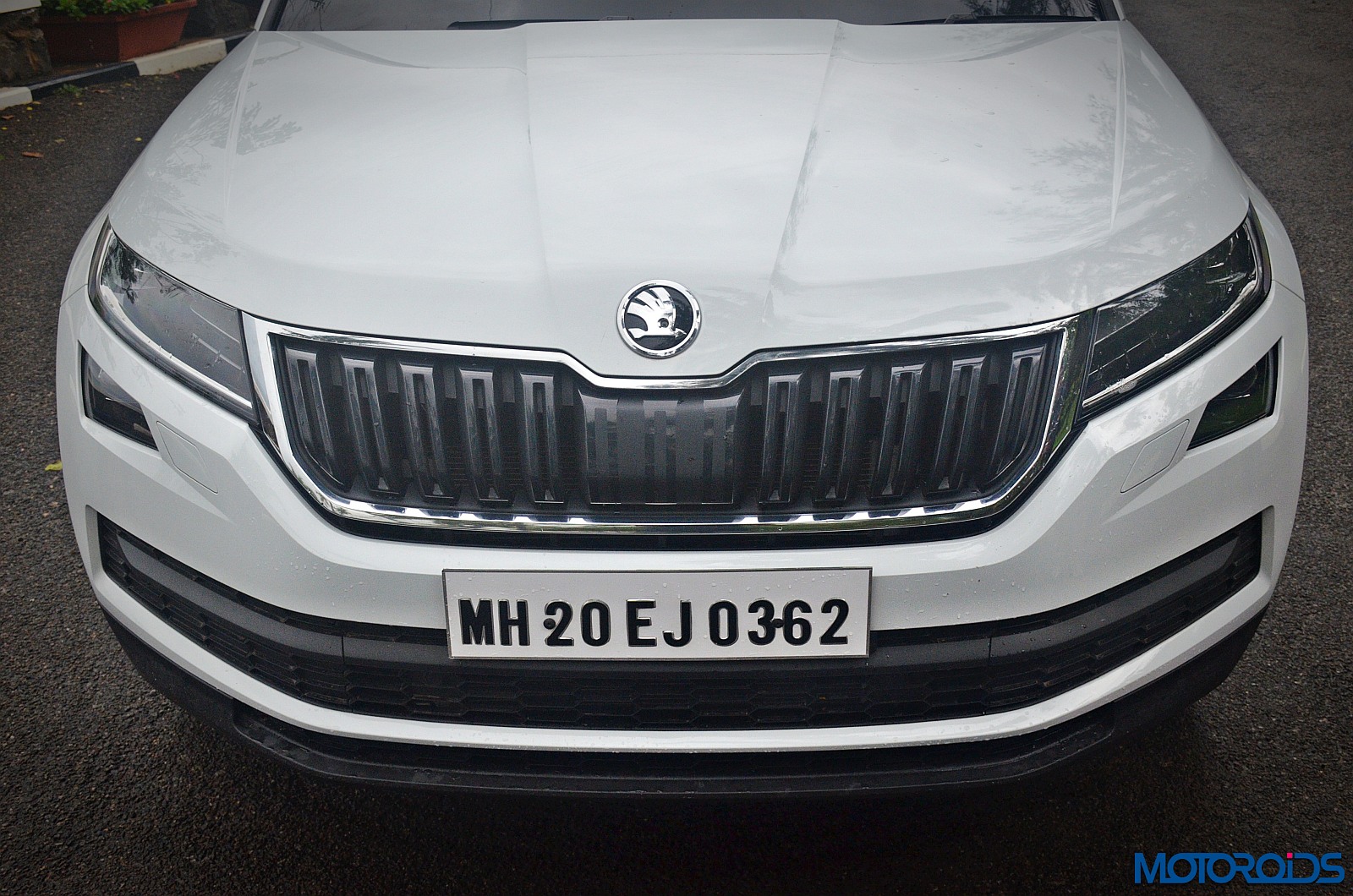 One common theme among the Skoda cars has been that they have always been driver’s cars and ignite the petro head inside us. Does the Kodiaq, despite being a big, butch soft-roader manage to tick that rather improbable Box? Let’s find out.

Kodiaq is based on the same platform as the Superb – VW group’s MQB architecture. When we looked at the Kodiaq the first time, we knew it was different. While SUVs generally have bulged up exteriors, the Kodiaq is way more balanced and sophisticated. A classic template of the evolved European car design, the Kodiaq comes across as an elegantly bold machine. 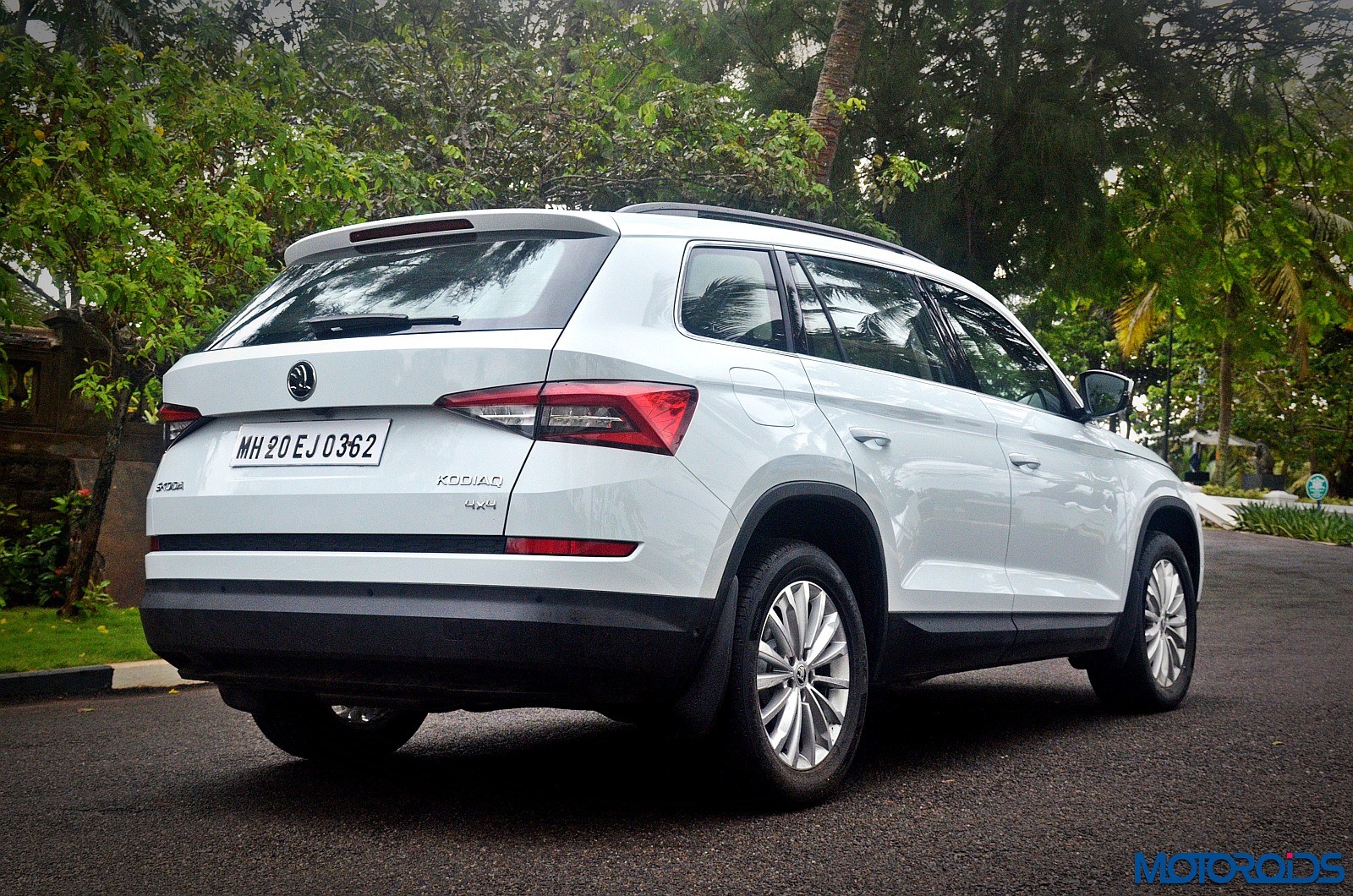 The thick shoulder line carries from the front headlamps all the way to rear tail lamps. Coupled with a parallel line at the bottom skirted by plastic cladding and a large a rear quarter glass – the side profile of the Kodiaq looks gentler and more estate like than that of a committed 4×4. Visual strength comes in the form of clean cut lines and wheel arches get an angular design rather than the round ones you see on some other SUVs. Big 18 inch trinity alloys further enrich the side profile. Add to this the long wheel base and shorter overhangs, and the Skoda Kodiaq has one of the smartest, most refined looking side stance we have seen on a vehicle in this class. It would definitely stand out among its counterparts, at least to the trained eye. 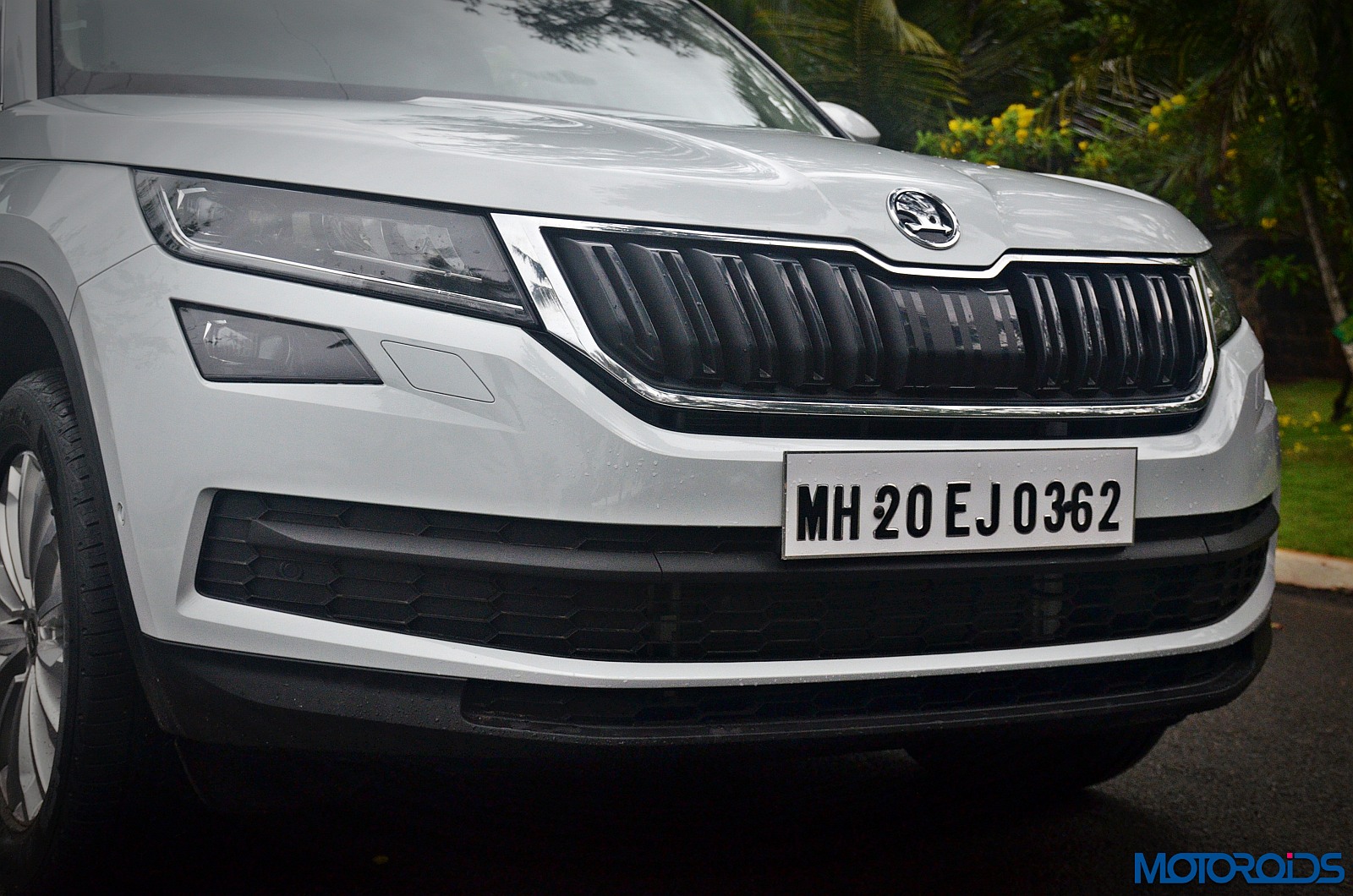 Signature Skoda butterfly front grill, sharp headlamps, high mounted fog lamps and a bold bumper along with a 3D bonnet make the front look sharp and purposeful. The shoulder line conceals the shut points of the bonnet. Come to the back of the car and you can see that rear tail lams are inspired from the Superb. Full LED tail lights cut into the boot lid and look as though they have been chiselled by an artisan. The crystalline design adds to luxurious feel and gives the Kodiaq a high end, premium feel.

Get inside and you get a familiar looking dashboard, akin to its sedan siblings. However, there are some major changes as well. AC vents here are vertical and larger, giving the dashboard a muscular look. The interior feel high quality with soft touch plastics on the dashboard, chrome treatment around AC vents, and a large dark grey plastic trim which acts like a second glove box on the passenger side. 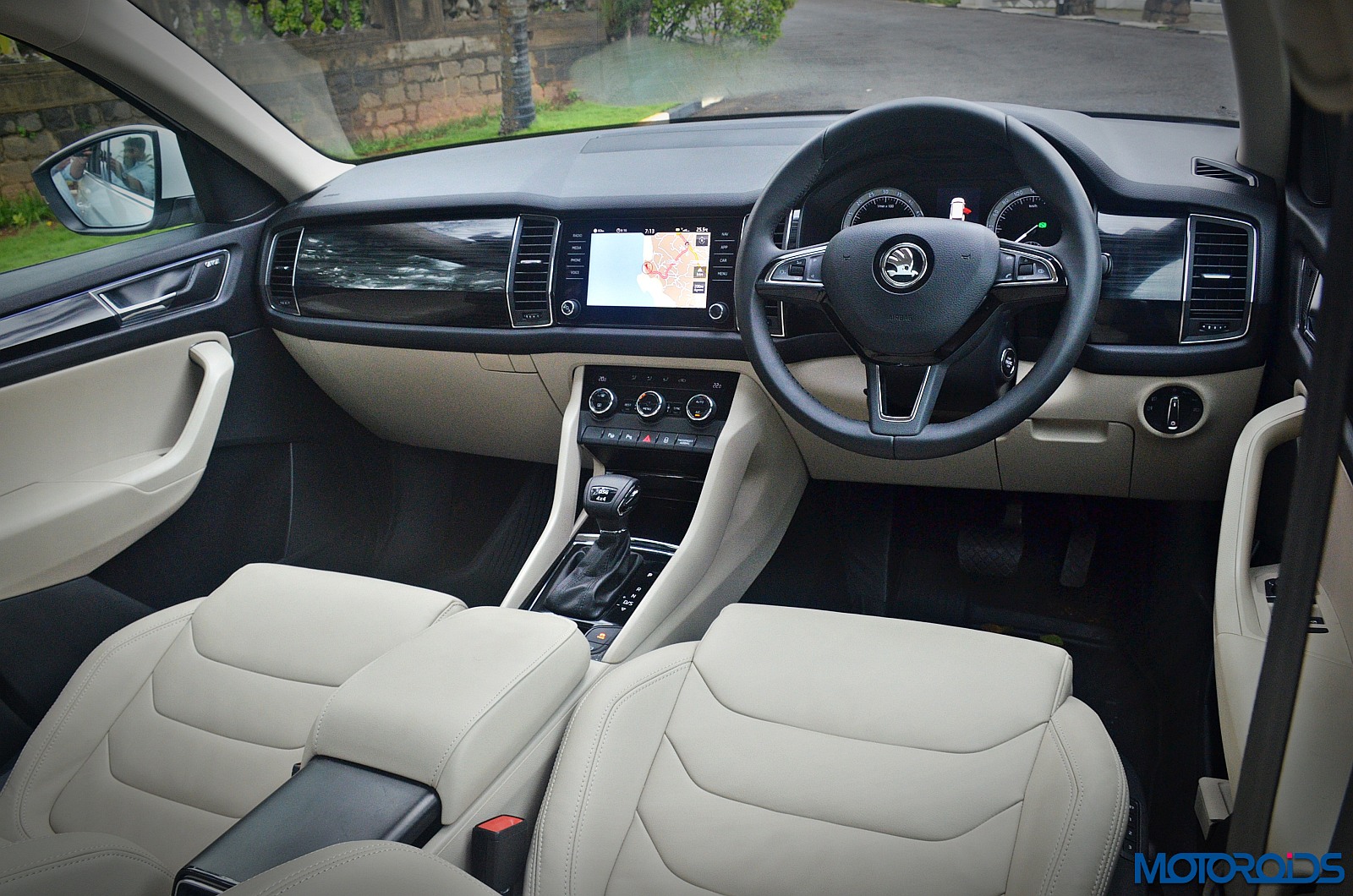 It’s beautifully housed between the vertically stacked central AC vents and goes well with the elegant dashboard. In India, Kodiaq will get dual tone dashboard in grey and beige and the light coloured lower part of the dashboard adds to the premium feel and an air of roominess. Interiors are spacious with good all round visibility.  Boot space goes from 270 litres with the third row up to 2005 litres with the second row tumbled down.

Do you like interesting peculiarities in a car? The Kodiaq has plenty! Just like the Superb, Skoda has put an umbrella tucked neatly inside each of the front doors. 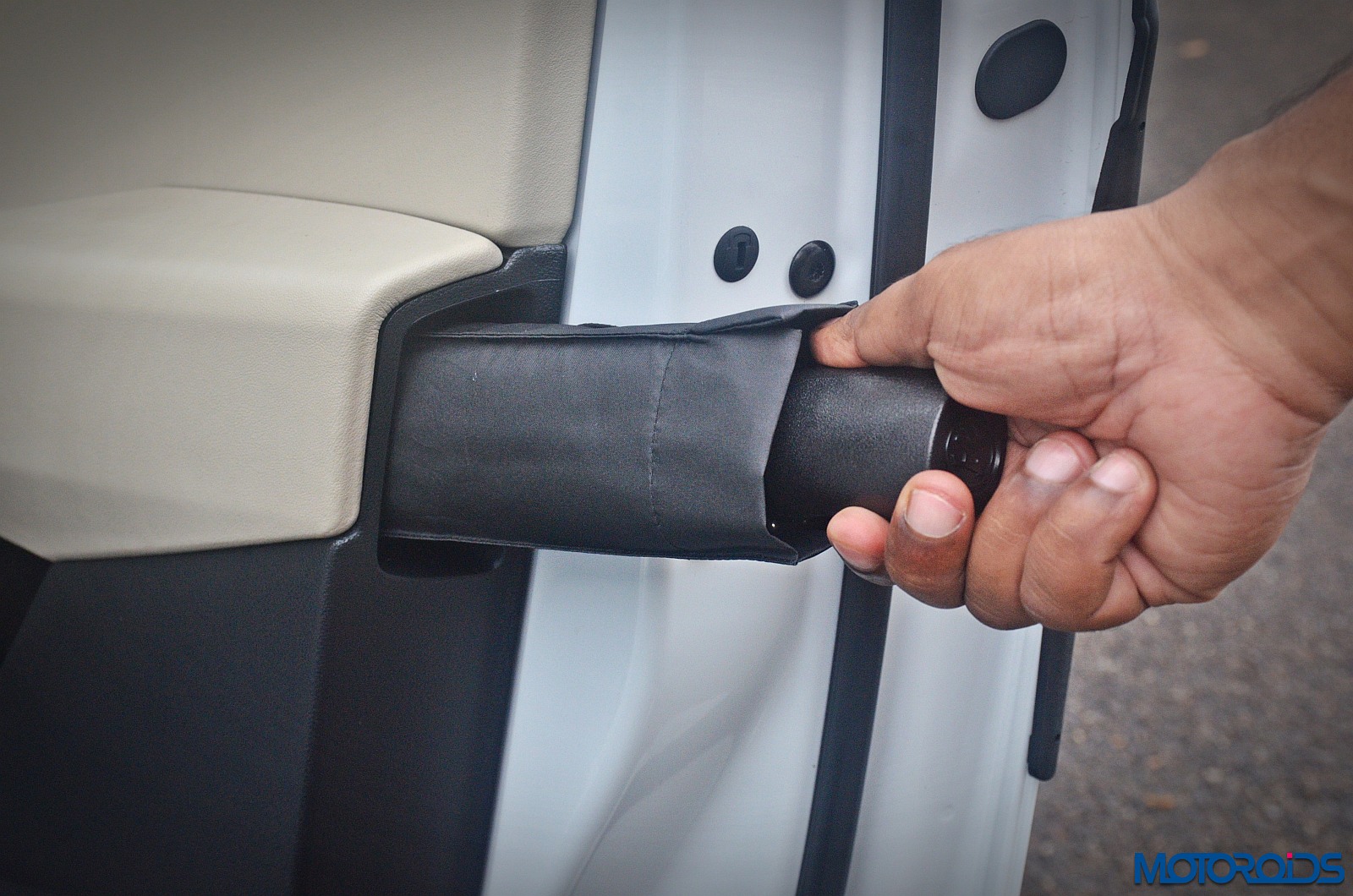 Worried about scratching the car door with another car or object while swinging it out? Don’t wish to paste one of those shabby looking protectors on the surface? Skoda has you covered. Each door gets a mechanically operated door protector which swivels out to the edge, when you open the door and get tucked back in when you close it. 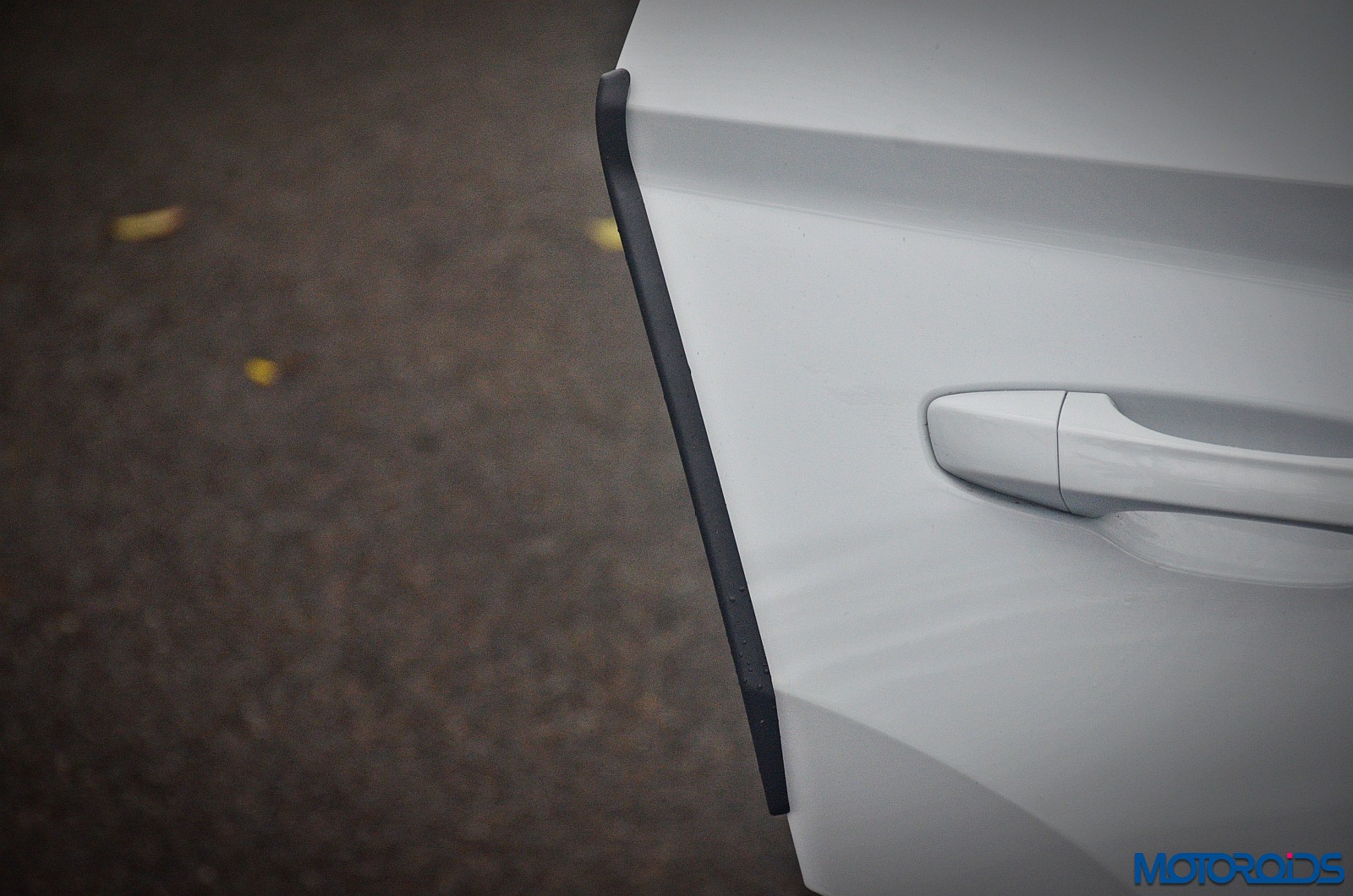 Ever replaced a wheel at night using a mobile phone’s light? You can now keep the phone for calling home, as there is a small magnetic torch neatly tucked in the boot.

Like to take a little nap during commutes, but keep falling down as you doze off? Skoda has thought of even that. You get these simple nap pads on second row head rests. Just swivel them out and you can rest your head on it and knock off.

They could’ve added a little bit of more cushioning but the pads are fairly comfortable and supportive we had them out the whole time we were on the rear seat. Why anyone else hasn’t thought of this, I wonder. Neat little features based on simple ideas. Good thinking, Skoda – and true to the ‘Simply Clever’ tagline too.

Get into the comfortable, well-cushioned front seats and adjust to a perfect driving position using electricity. Still feel the steering position isn’t right? Adjust it for rake and reach. Starter button is positioned where one usually finds the key. Thumb the starter and the 2.0 litre Diesel Engine comes to life with all of its 150hp of power. 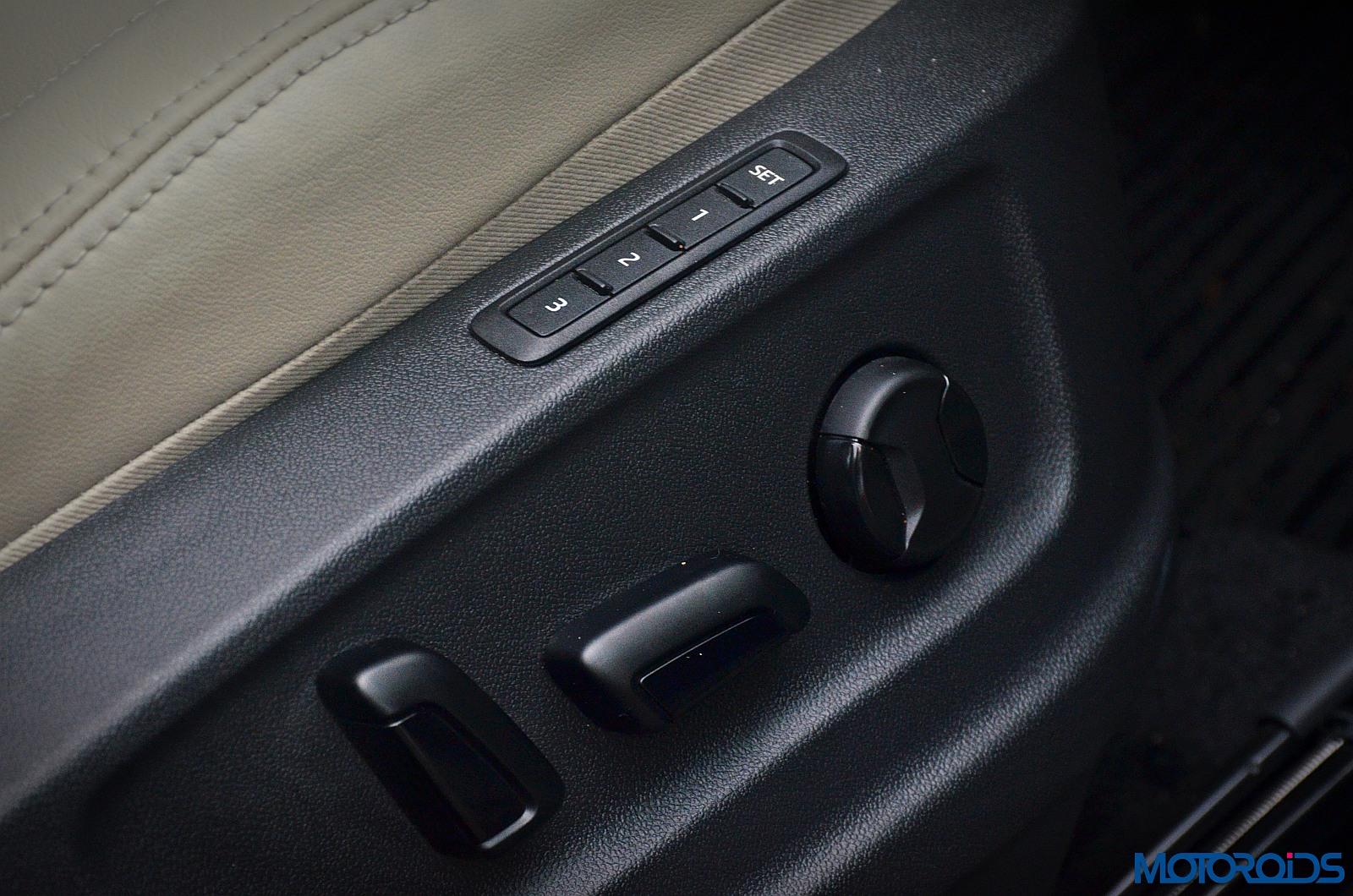 The engine is refined, with no noise creeping into the cabin. Even on the outside, with the bonnet shut there was little diesel engine clatter. 350 Nm of torque being transmitted through 7 speed DSG box pulls the Kodiaq well through the rev range. In-gear acceleration is good with the DSG performing its duties ably as ever. Pedal shifters on the steering wheel are smooth, handy and quick.

Engine is punchy and you are never hunting for power. It is a 4×4, an AWD actually with front wheel getting 90% of the power and only 10% going to the rear. The centrepiece of the all-wheel drive is an electronically controlled multi-plate clutch. The all-wheel-drive system works intelligently and quickly. The control unit constantly calculates the ideal driving torque for the rear axle; loss of traction is tackled with a control system that is dependent on driving status. When in overrun or at low load, drive is via the front axle, which saves fuel. 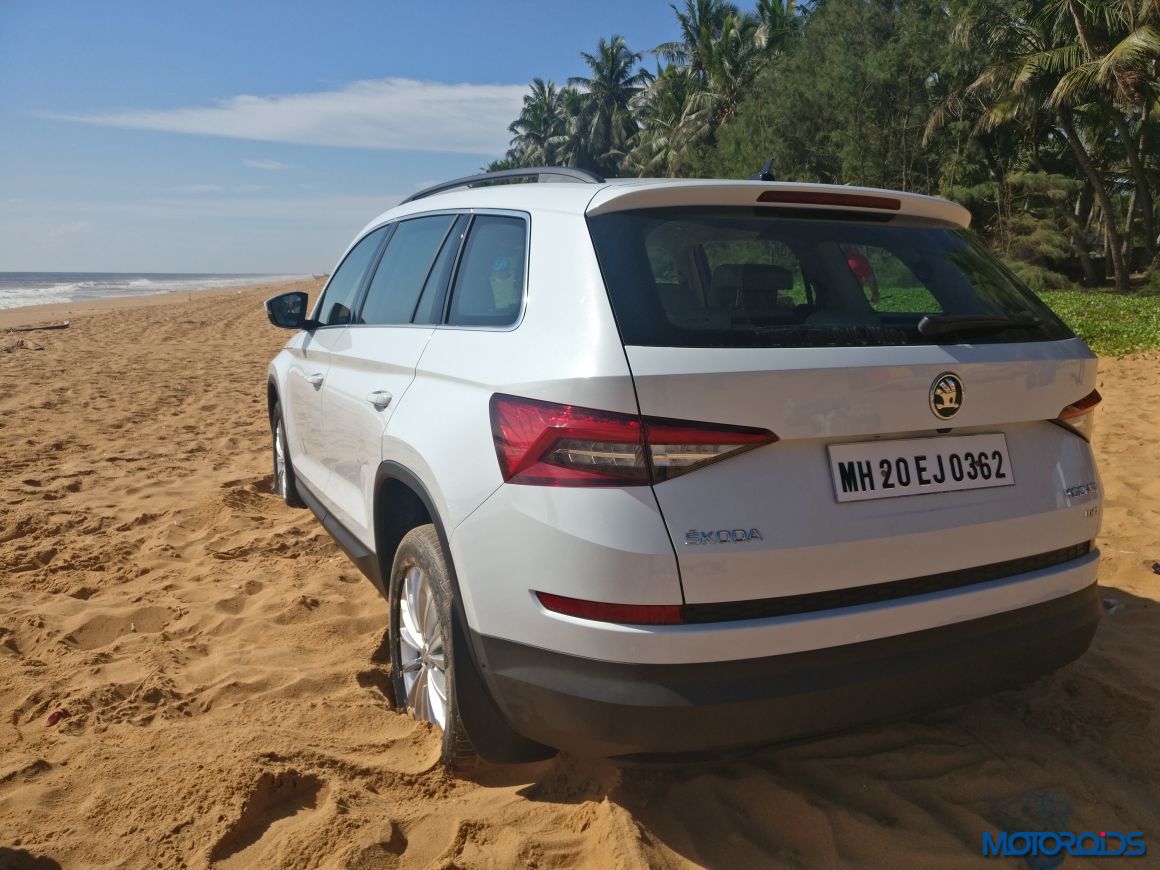 According to Skoda, the power ratio between front and rear does change depending upon driving conditions, however we feel it is more of a soft roader than a proper off roader. It can get you out of mildly challenging scenarios, though it’s not a hardcore 4×4 which would wrangle its way out of deep, slimy, slushy or too sandy surfaces. We found the rear wheel lacking in traction in a couple of scenarios where we tested it for its ability off the road. It’s still sufficiently capable to be your companion in those weekend adventure trips where you require a certain amount of off-roading capability from your machine. Don’t venture out in the jungle and ford rivers on this one though.

On road performance is good with a well sorted suspension which takes on pot holes and broken roads in its stride with aplomb. Steering is well-weighted with good feedback. Driving the Kodiaq is more sedan like than SUV like. 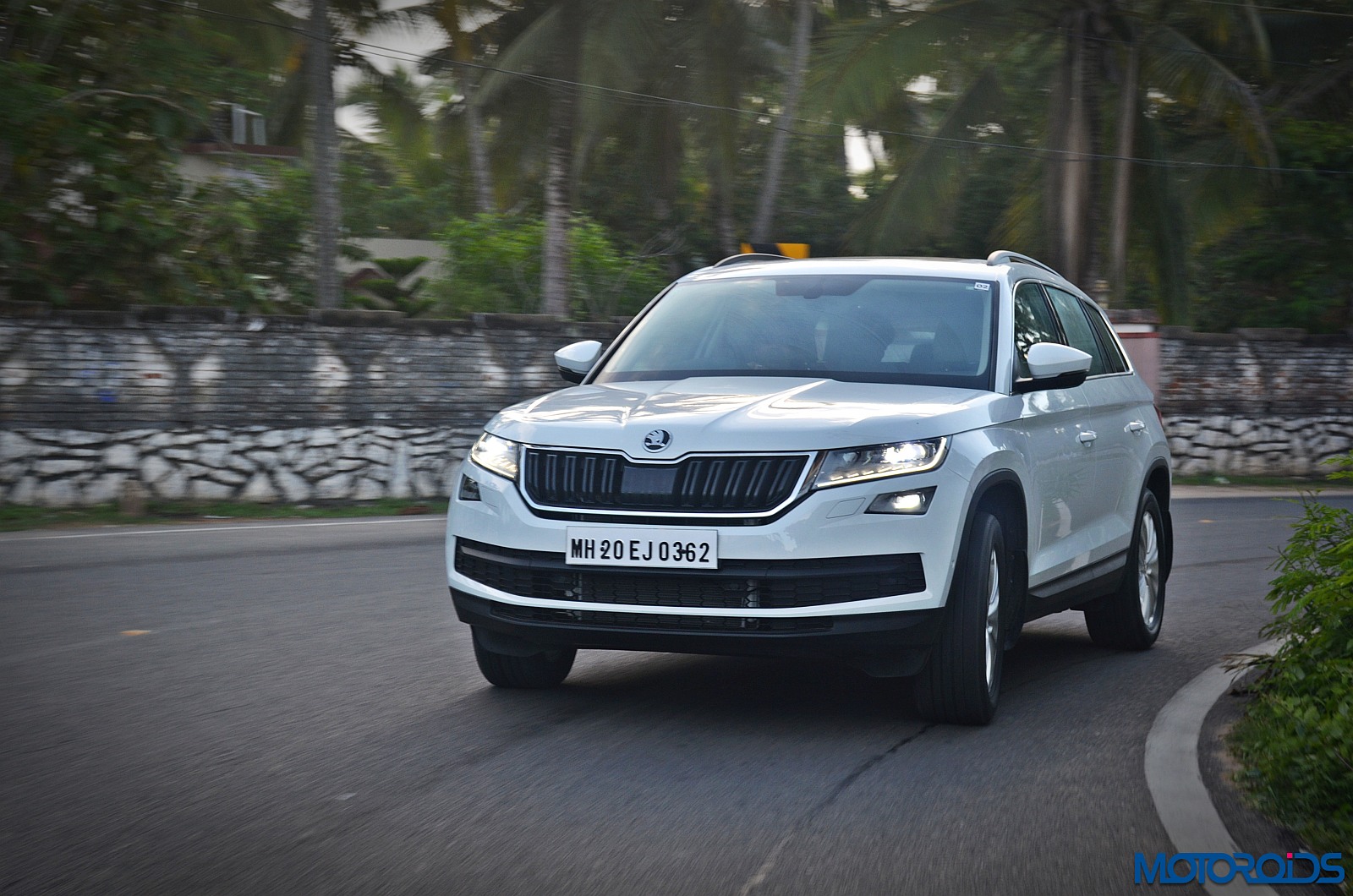 While it is a wide and long SUV, it’s not that tall and at 180 mm ground clearance you do not get the feeling of sitting on the first floor of a building. However, given the large cabin, you do feel you are driving a large SUV. Being a monocoque, the driving dynamics are great with minimal body roll and a planted ride. Brakes bite well without sending the car for a nose dive. 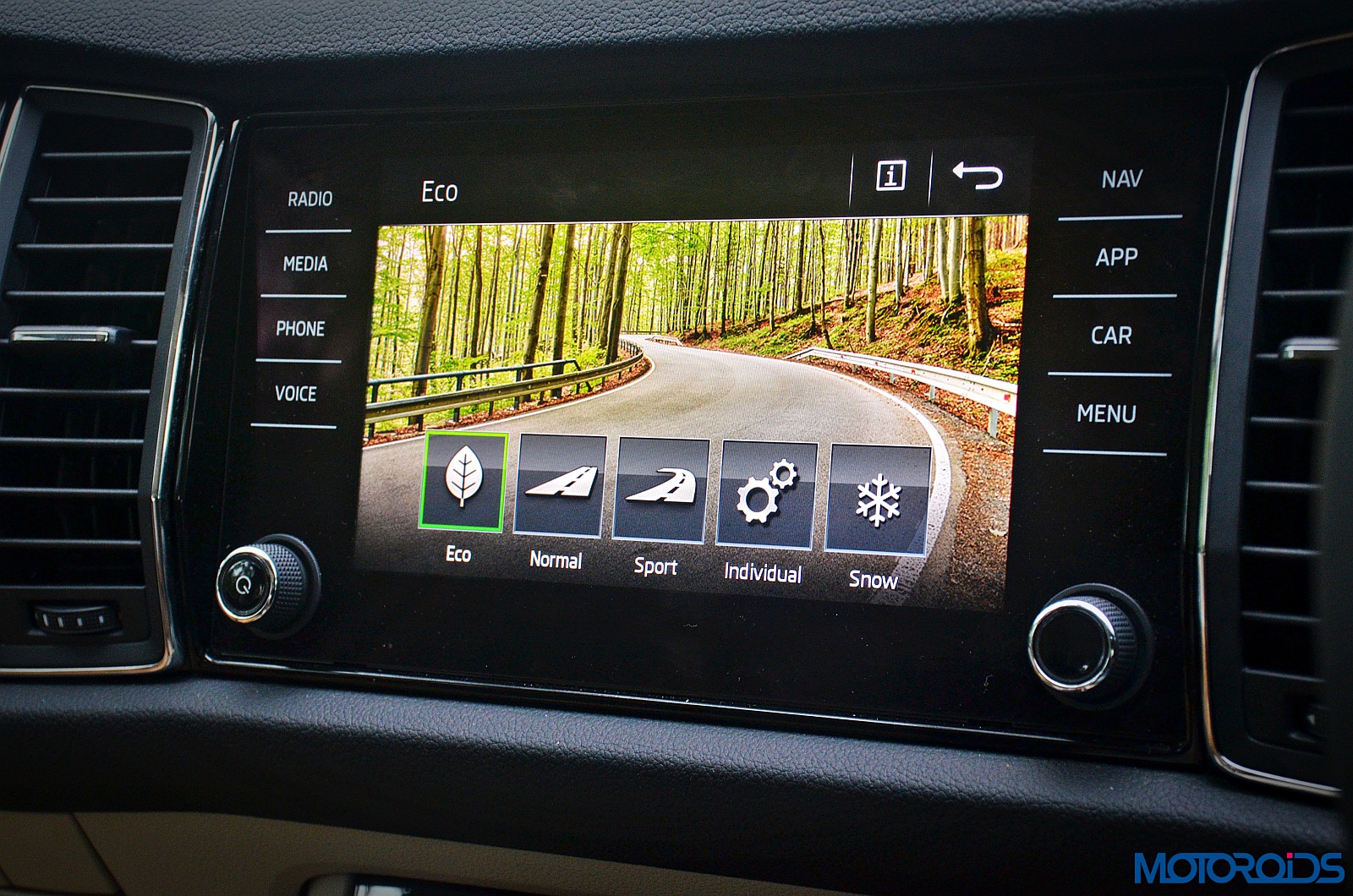 The Kodiaq gets several driving modes such as Eco, Normal, Sport, Individual and Snow. It changes Steering response, Drive – power delivery, Dynamic cornering lights, and air conditioning. Yes, a 4×4 7 seater SUV gets cornering lights. Attention to detail by Skoda continues here. As we switched through different modes, the image on the instrument panel also changed. 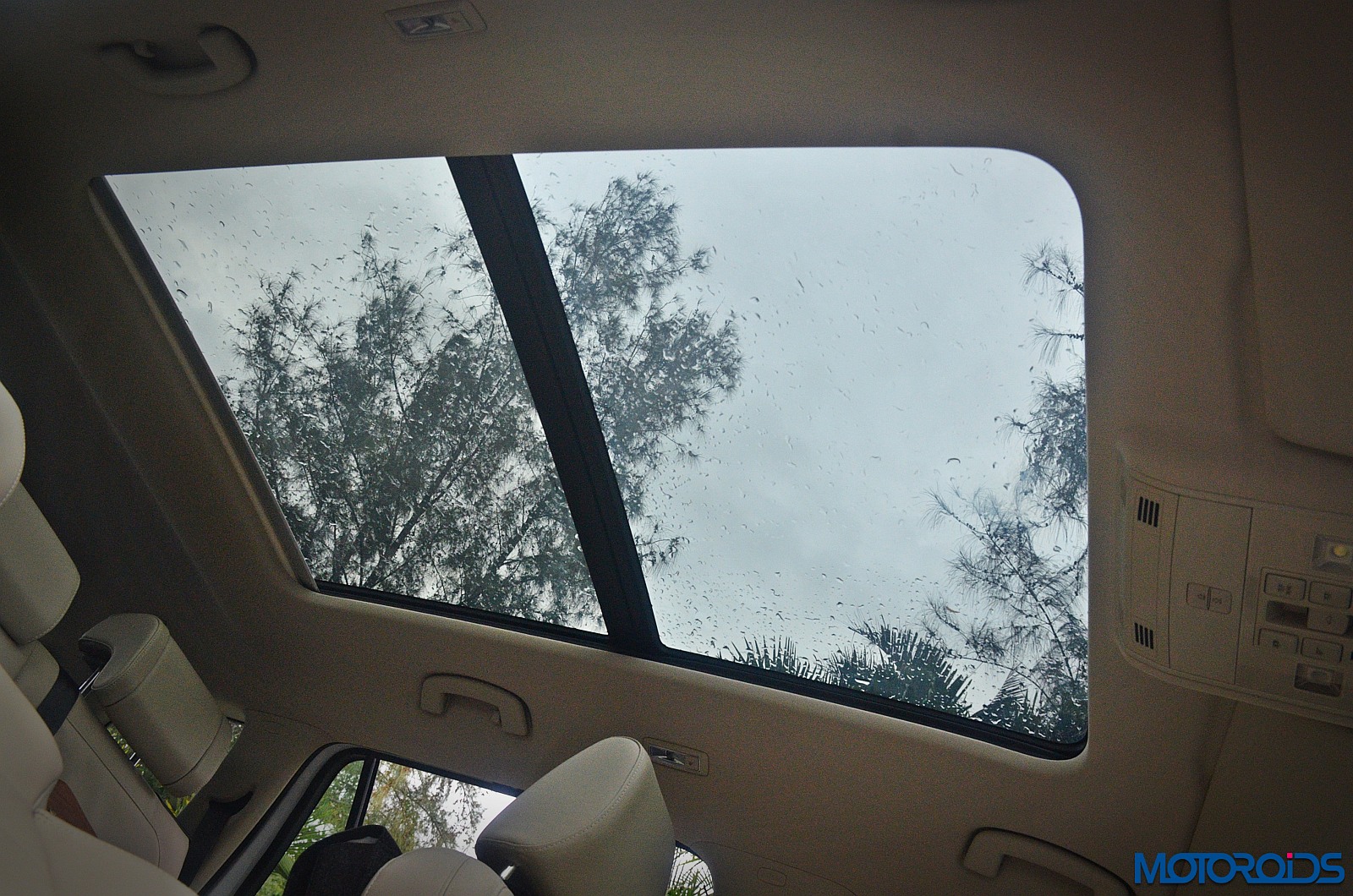 We kept it in Eco mode in the narrow lanes with significant traffic and the Kodiaq puttered around well. Switched to Sport mode when the highway opened up and we could feel improved power delivery and better steering response. We threw it around corners and were surprised by how composed the big 7 seater was. There wasn’t much of body roll, tyres were grippy and it drove like a well sorted large sedan than a large SUV which roll around like a 5 years old kid high on sugar.

The Kodiaq may not look too monstrous from the outside, thanks to its refined design which conceals its girth well, but once inside, the clever packaging and generous space become very apparent. There are a lot of utilities all around with adjustable middle row, large rear quarter glass panels. This makes the third row come across as airy and full of light, making things better for the occupants there. 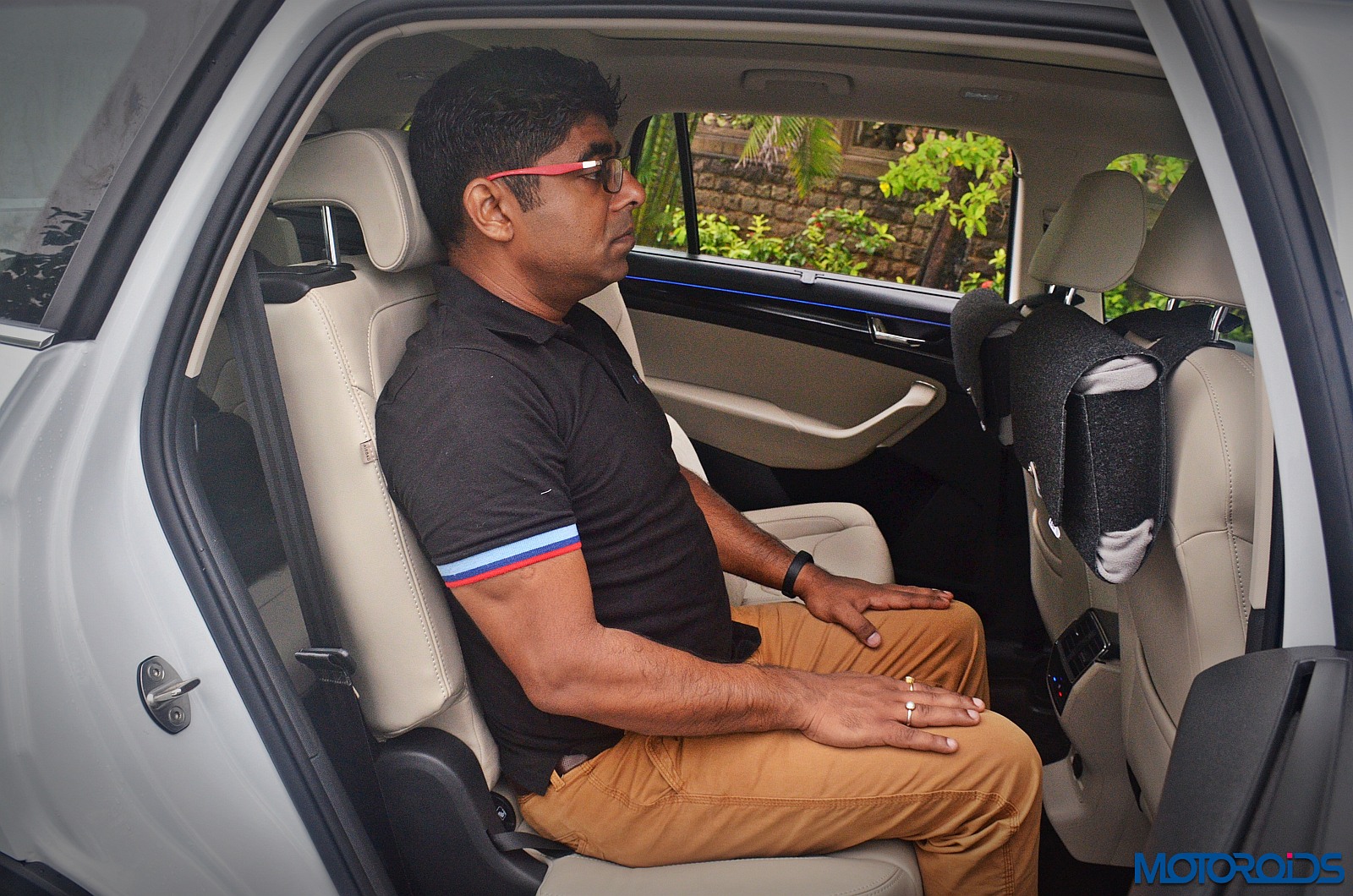 Driver and passenger seats are fairly comfortable providing ample shoulder and bolster support. Electrically adjustable seats mean driver can get in a comfy position as they like. Second row seats can be adjusted by as much as 180mm fore and aft and have decent leg room even with the front seat pulled all the way back. Under thigh support could be a little better but the nap pads we mentioned earlier go a long way in enhancing the comfort quotient in the middle row. 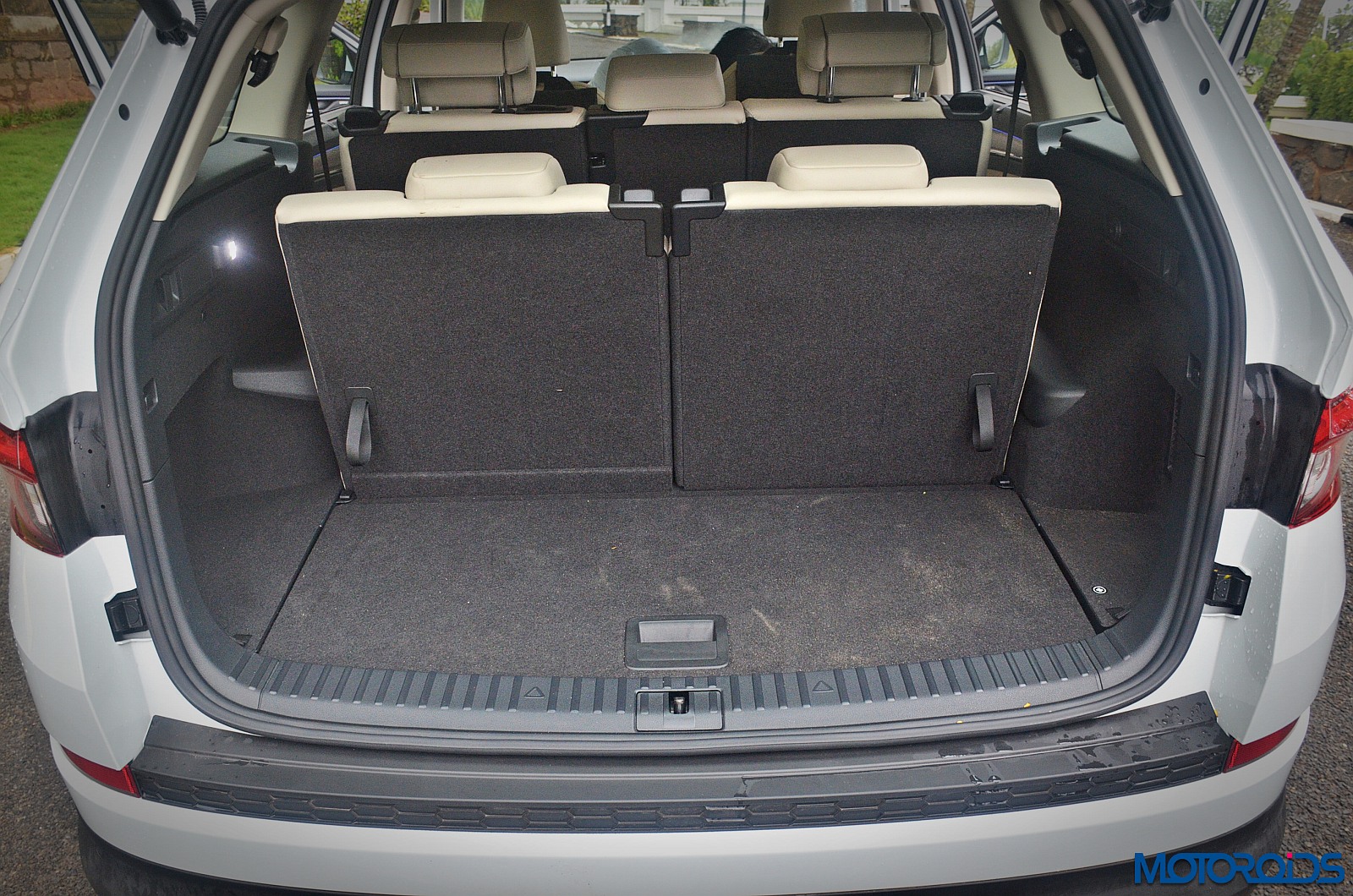 There are several cubby holes and storage spaces inside the new Kodiaq. There is a glove compartment where one usually finds passenger side airbag (airbag is moved above it). This compartment has anti-skid rubber so that stuff inside does not move around. There’s the usual glove compartment to store papers below the top box. There’s a large storage compartment under the driver’s armrest with a removable drinks tray. 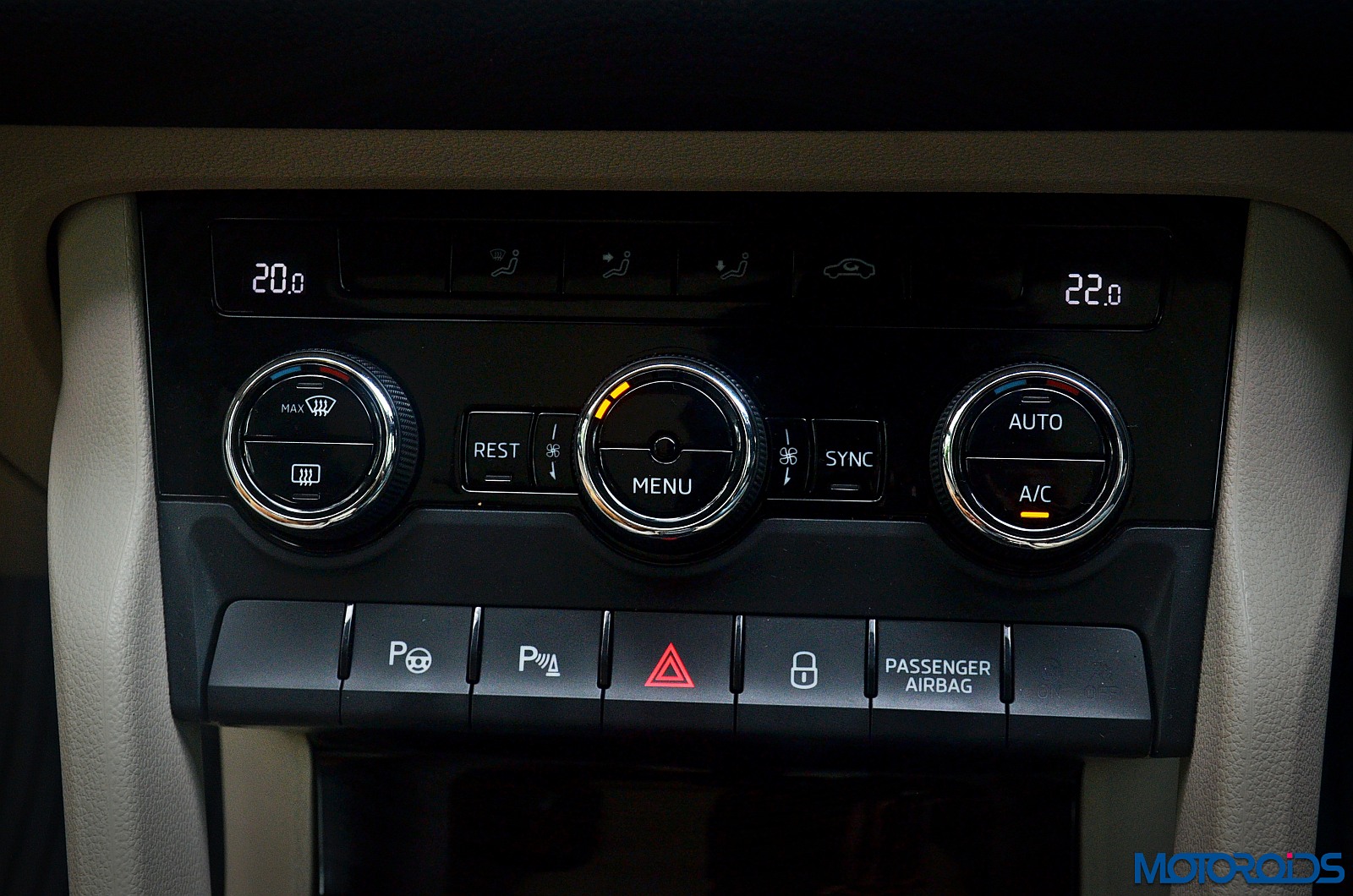 Door pockets can store 1-litre bottles and there is a small compartment right next to the steering column. Makes for a good storage space for mobile and wallet, just in case you do not want the passengers to fiddle around with them.  AC is quiet effective and after sweating it out on the beach for a bit, the cabin cooled instantly providing great respite from the heat. Kodiaq has a three zone climate control – two zones up front and one in the rear. There is even a sync button, press that and temp of all zones are synchronised with a single knob. AC can be controlled either via buttons and knobs or through the infotainment system.

We think with the right pricing, Skoda may have another winner at hand. It is quite a unique product. While there are several  7 seaters out there, the Kodiaq scores highly for its distinct looks, driving refinement, comfort levels, luxurious interior, punchy engine-transmission combo and generous features. It is not for the off-roading enthusiasts, but for those who want a big, spacious machine which can be taken off the tar for casual bouts of adventure, the Kodiaq seems like just the right recipe. We’ll wait for the prices to be announced before letting out our final verdict though

Check out an exhaustive image gallery of the Skoda Kodiaq below: