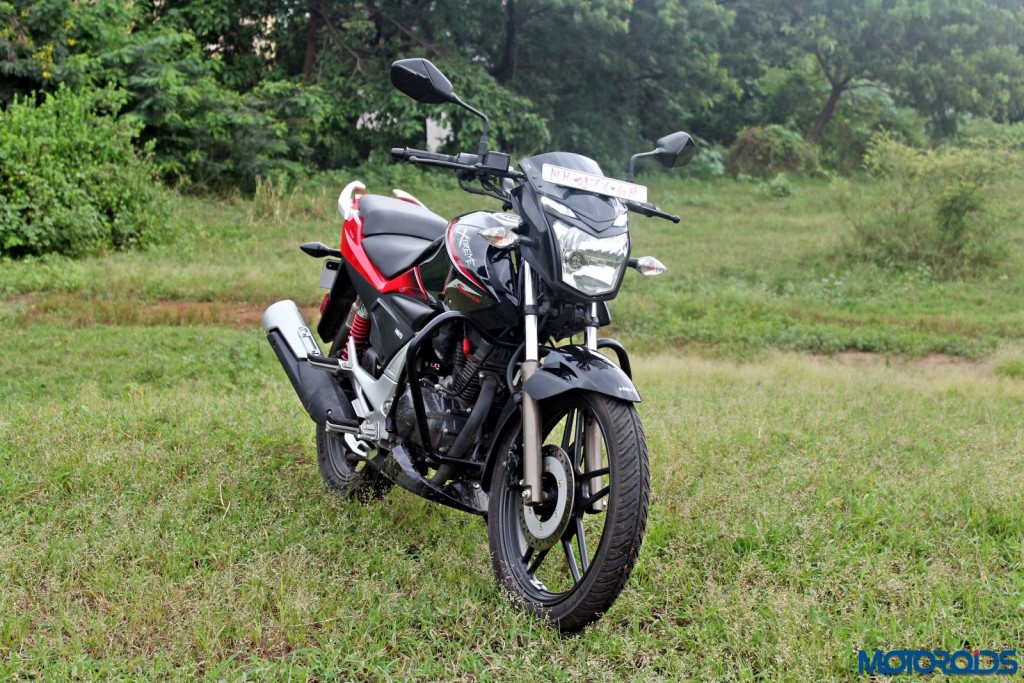 Nearly 16 years ago, Hero MotoCorp, then known as Hero Honda, broke the shackles of being a fuel economy oriented motorcycle manufacturer and introduced its first performance spec product, the CBZ. Powered by an over-square engine, the Hero Honda CBZ was equipped with a Keihin slide type carburetor clubbed with a accelerator pump which was aimed to provide better acceleration. Seven years later, in 2006, the CBZ nomenclature was joined by Xtreme tag, along with which came new design philosophy that changed the persona of the nameplate. Last year, Hero MotoCorp dropped the CBZ tag while retaining the Xtreme nomenclature for this 150cc motorcycle. The motorcycle received a whole new design and list of features that set it apart from earlier variants.

Come 2015 and Hero MotoCorp is back with another new variant of its 150cc commuter with a “Sports” tag added to its name – the 2015 Xtreme Sports. The new Xtreme Sports is an updated CBZ Xtreme, packed with some cosmetic enhancements and re-tweaked engine that puts out slightly better performance numbers than any other CBZ/Xtreme variant yet. We rode the motorcycle for a good 500 km in city and highway to find out how much of an improvement it really is. 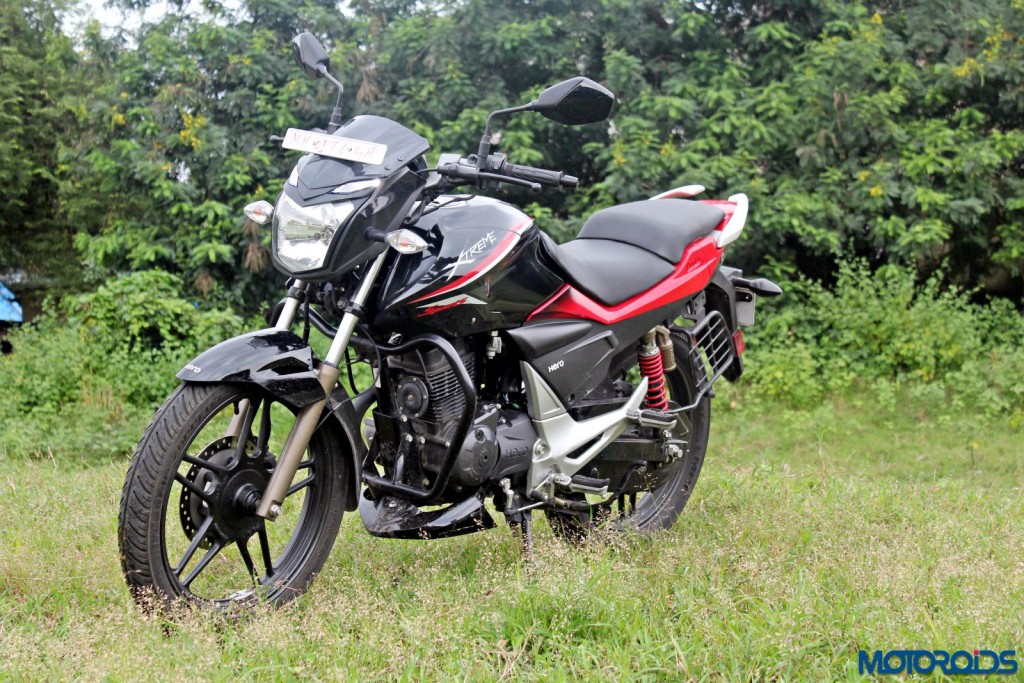 The new Xtreme Sports borrows a lot of elements from the CBZ Xtreme. That being said, the motorcycle boast some enhancements with an updated headlight, fuel tank and bodywork. Let’s start with that headlight. The busy pilot light console from the 2014 Hero Xtreme is simplified in the new Xtreme Sports. The Xtreme Sports gets a set of new pilot lamps that is powered by two white-bulbs sitting atop the main illuminator.

The fairing has also been slightly redesigned and the curvy blinkers from last year’s model are replaced by pointy units for 2015. But what sits next to the turn indicator is an interesting, and first-in-segment feature. Last year, the Hero Xtreme received a first-in-segment engine immobiliser with a blue LED ring around the keyhole. For 2015, the keyhole, unlike any other motorcycle in this segment, has been moved to the right side of the fairing, right next to the front turn indicators. This particular design element may add to the aesthetic value but finding the key-hole, especially after dark, is bit of a task. Add to that the absence of engine kill switch and you may have a situation that would take a while to acquaint yourselves with. 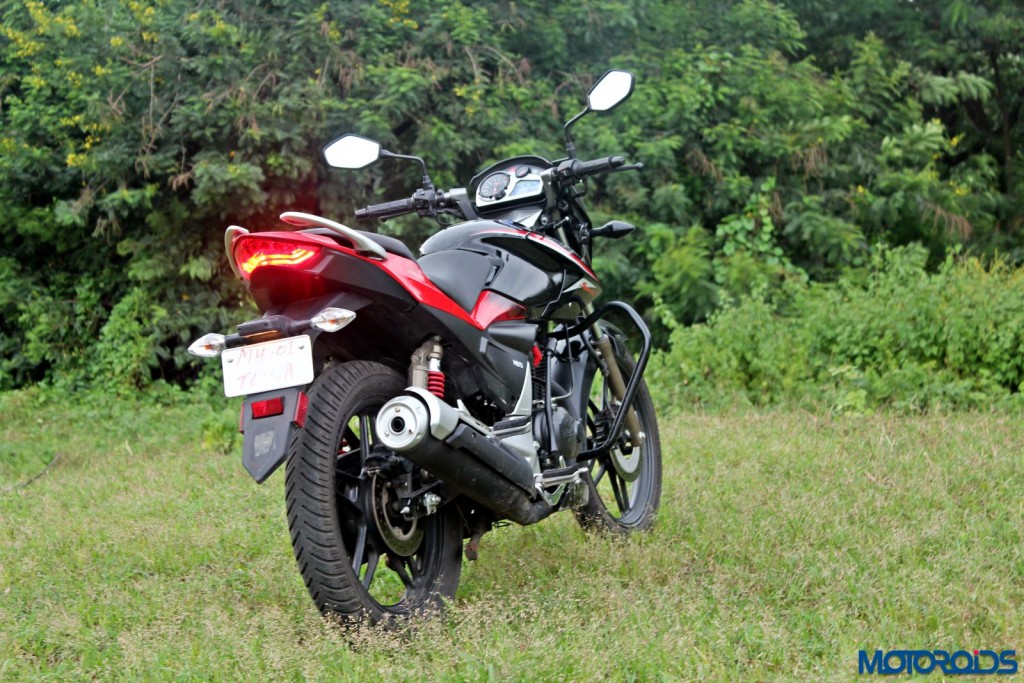 Turn the key to bring to life the new Xtreme Sports to life and a blue backlit instrument cluster awaits you. This instrument cluster, however, has gone a step backward and doesn’t look as cool as the 2014 model. The angular instrument panel from the 2014 model has been shown the door by the designers as the 2015 Xtreme Sports returns with a subtle, simple instrument panel that was seen on the Hero CBZ Xtreme. The entire layout is pretty simple and neat with a huge analogue tacho dial occupying the most area on the left. A digital console – with speedometer, odometer, A/B trip meter and clock – sits at the right side of the panel. The analogue fuel gauge is located right between the telltale indicators. A new addition for 2015, similar to many Hero MotoCorp motorcycles, is a side-stand warning that is placed on the left side of the turn indicators on the instrument cluster. The keyhole, as mentioned before, is placed below the fairing and the area surrounding the instrument panel is quite neat and uncluttered. 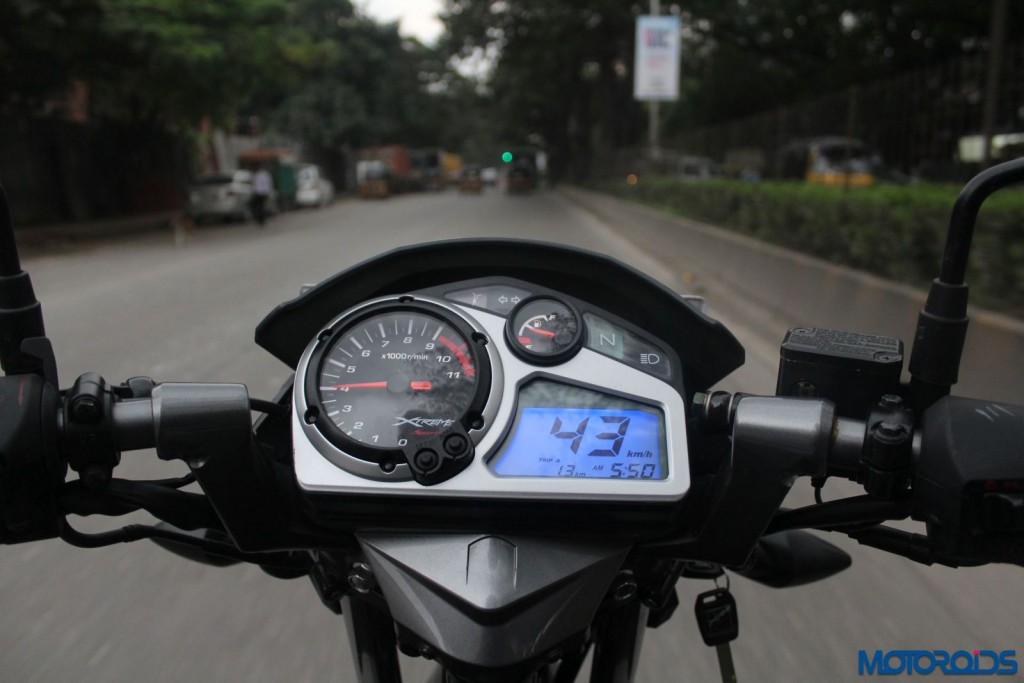 The switchgear, which has been carried forward from last year, still holds an empty space on the right side as the 2015 Hero Xtreme Sports yet again misses the engine kill switch. The quality is satisfactory, though it can be improved. The pass-light switch, for example, in our test vehicle would constantly get stuck when engaged and I would have to flick it slightly to get it back into its original position. But that’s something that can be overlooked and a spurt of WD40 is all it should need. 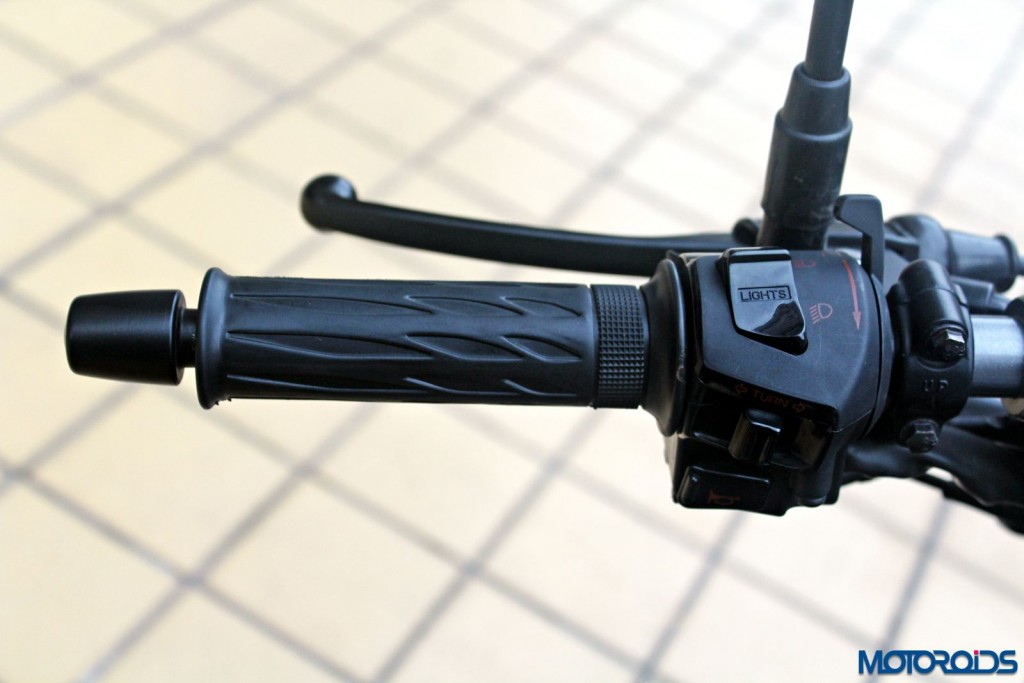 As the eyes wander further, one can easily notice the muscular fuel tank, again similar to the CBZ Xtreme, replete with tank shrouds for a brawny appearance. The flush mount type fuel lid adds to the aesthetics while also preventing water from seeping into the fuel tank. The tank recess design flows in line with the shrouds. The side and rear panels have been slightly refreshed for 2015 as the designers at Hero MotoCorp experimented with the contrast of body colour and the black panels. Compared to 2014, the Hero badge on the side of the motorcycle slides onto the side panel while the ATFT sticker, along with the keyhole to access the under seat area, moves more rearwards. While the LED tail-light, and rear numberplate illuminator, is retained from the 2014 Hero Xtreme, the exhaust with a dual tone black and dull silver colour heat shield and the 5 X 2 spoke alloy wheels have been borrowed from the CBZ Xtreme. 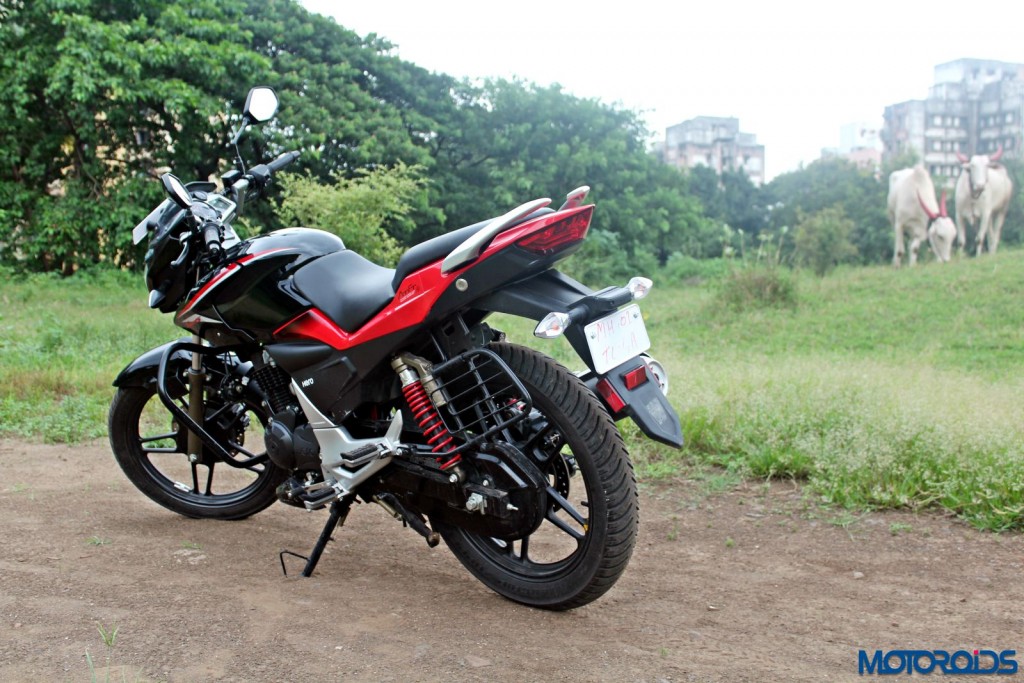 The overall build quality is at par with its competitors and the fit and finish is laudable. Surprisingly, unlike the 2014 Hero Xtreme, the new Xtreme Sports does not come with a USB charging port which was a bit of a letdown. Not that we would be using it often but it feels good to have an option in place. Moreover, I would have loved the fairing and tail-light integrated turn indicators, like the CBZ Xtreme, for a minimalist and cleaner design. The ignition key placement is another bit that should have been accompanied with a engine kill switch as switching off the motorcycle on long signals requires that much extra effort. But what when the traffic light goes green? 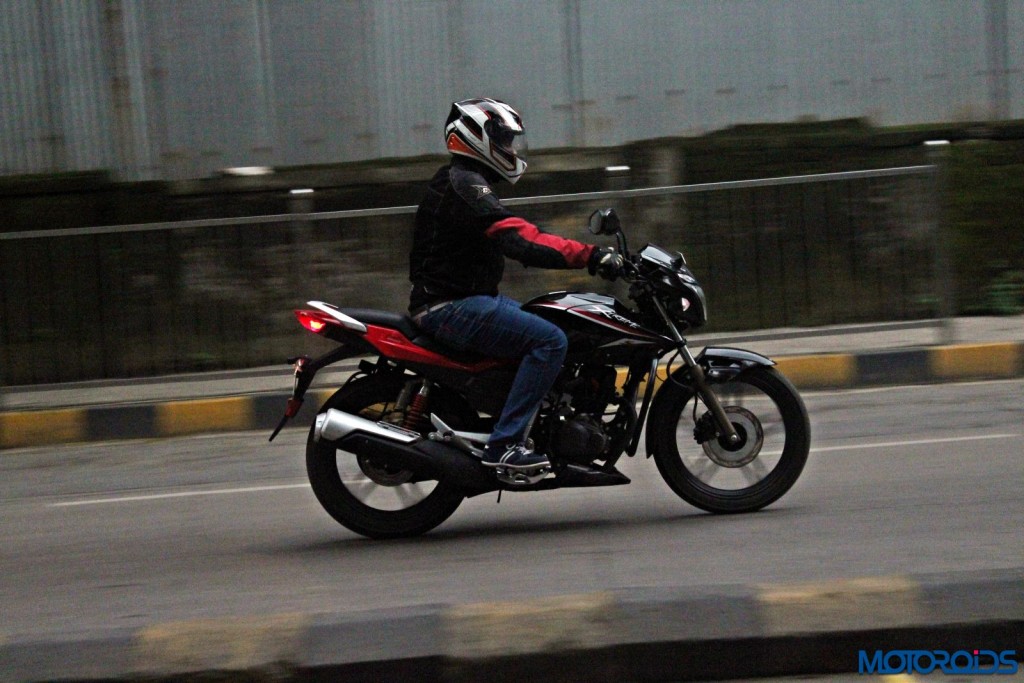 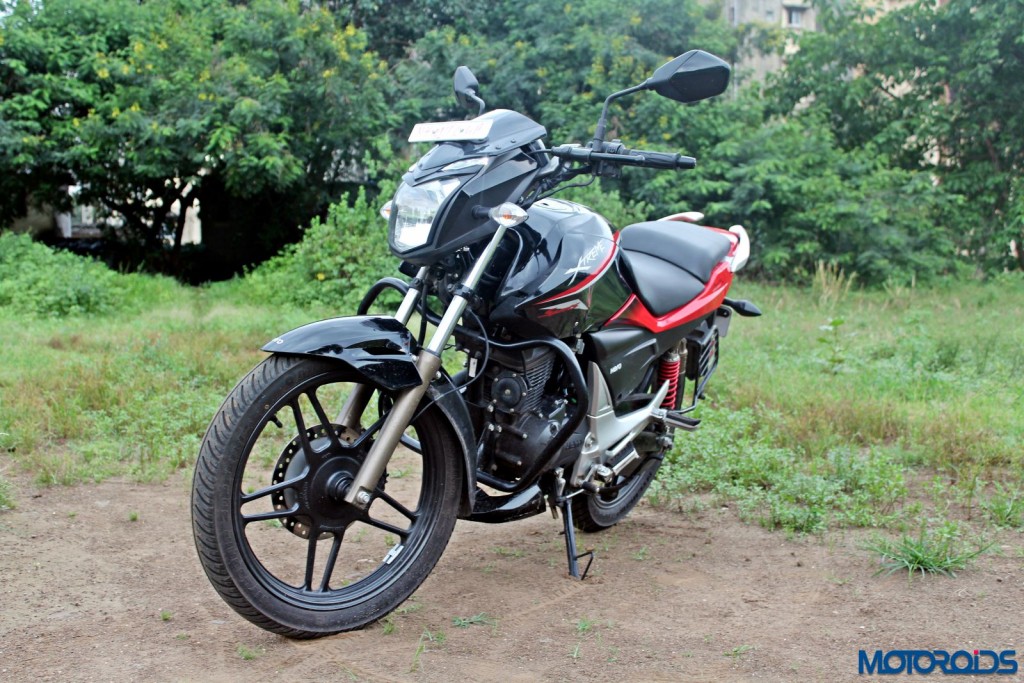 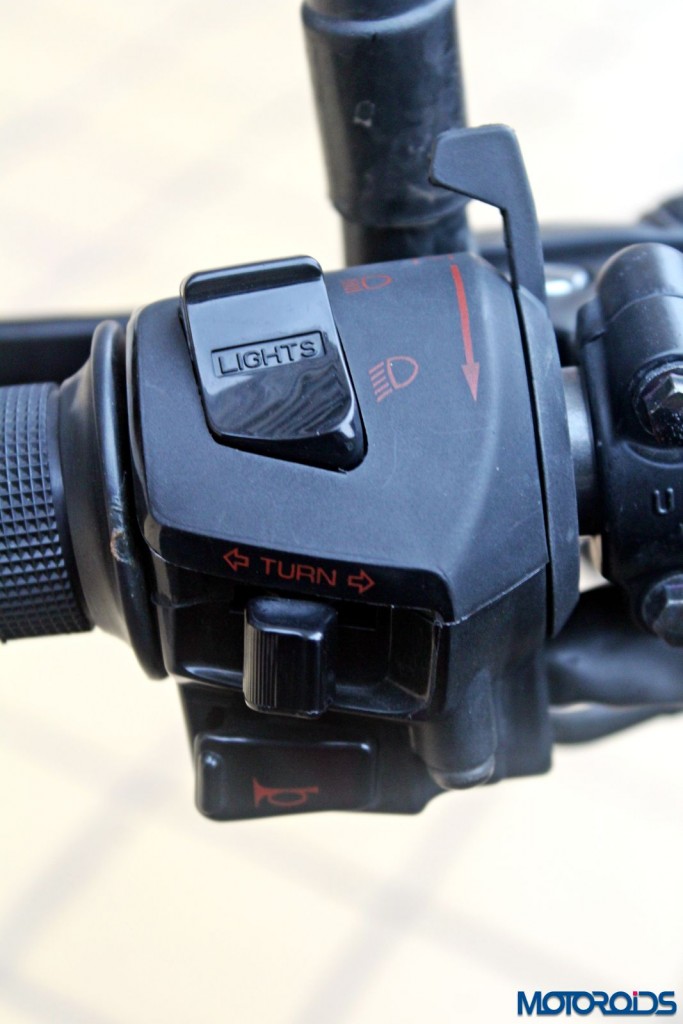 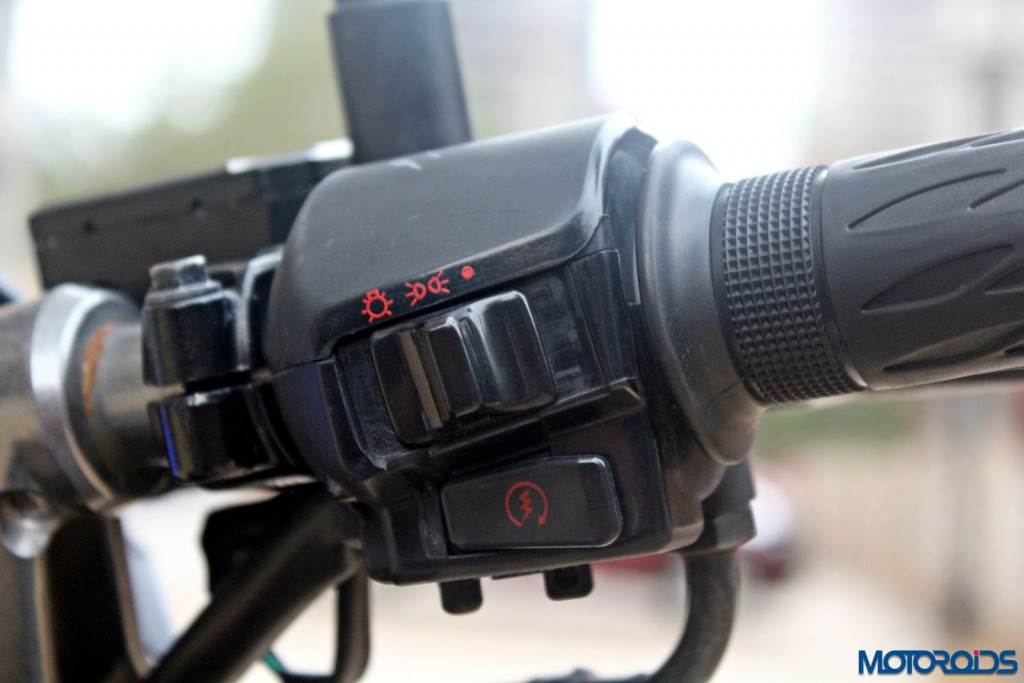 2015 Hero Xtreme Sports yet again misses the engine kill switch. The overall quality is satisfactory though 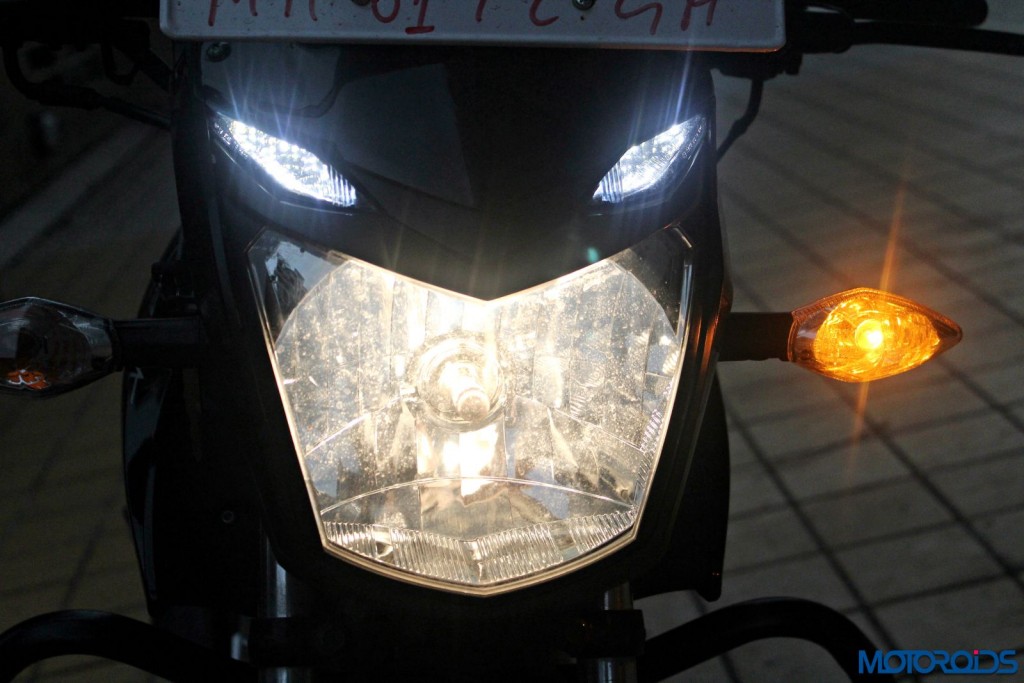 The headlight does a satisfactory job of illumination, nothing to brag about though 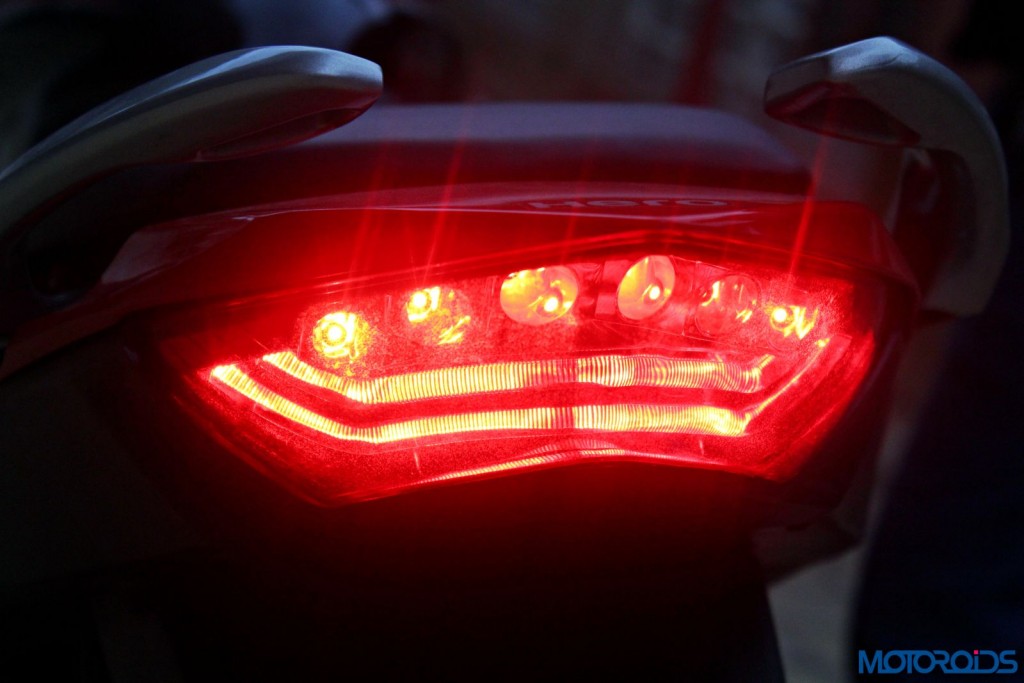 The LED tail light comes from the 2014 Hero Xtreme 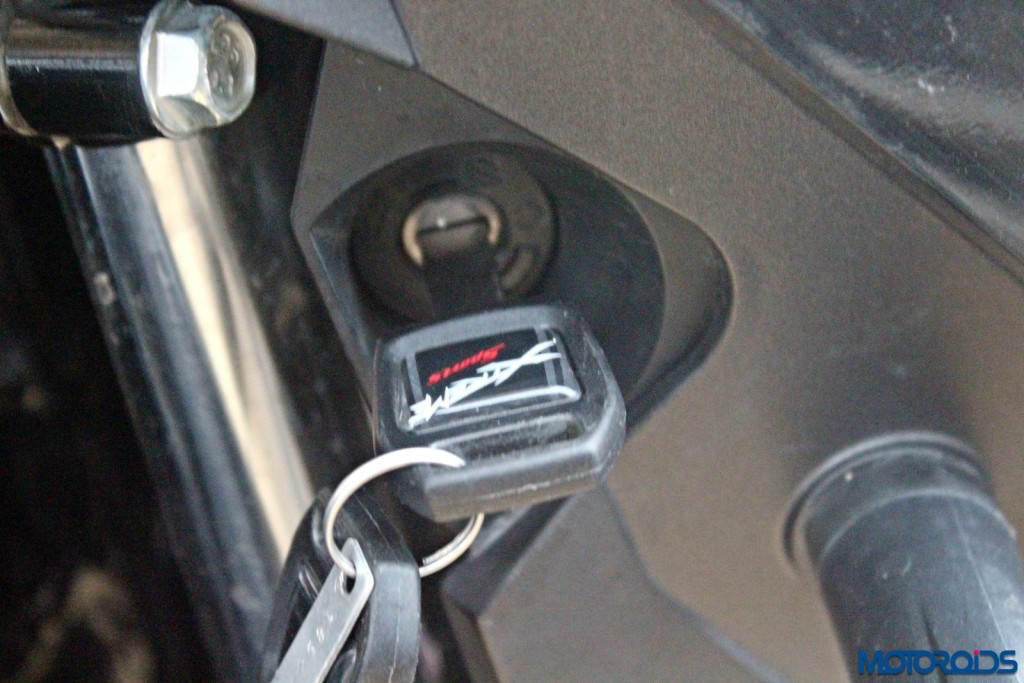 The keyhole is positioned on the right side of the fairing. Add to that the absence of engine kill switch and you may have a situation that would take a while to acquaint.

The instrument cluster is clearly visible in bright daylight. The telltale indicators, however, are a little difficult to read during daytime 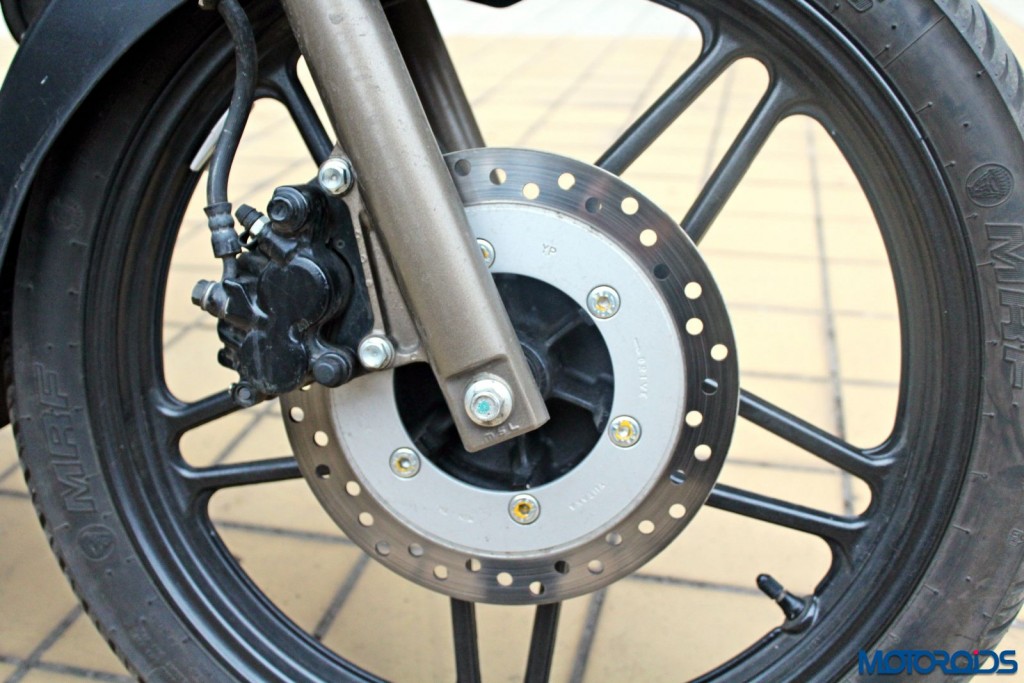 The disc brakes are carried forward from previous year’s model. We would have loved to see combined braking system on the Xtreme Sport 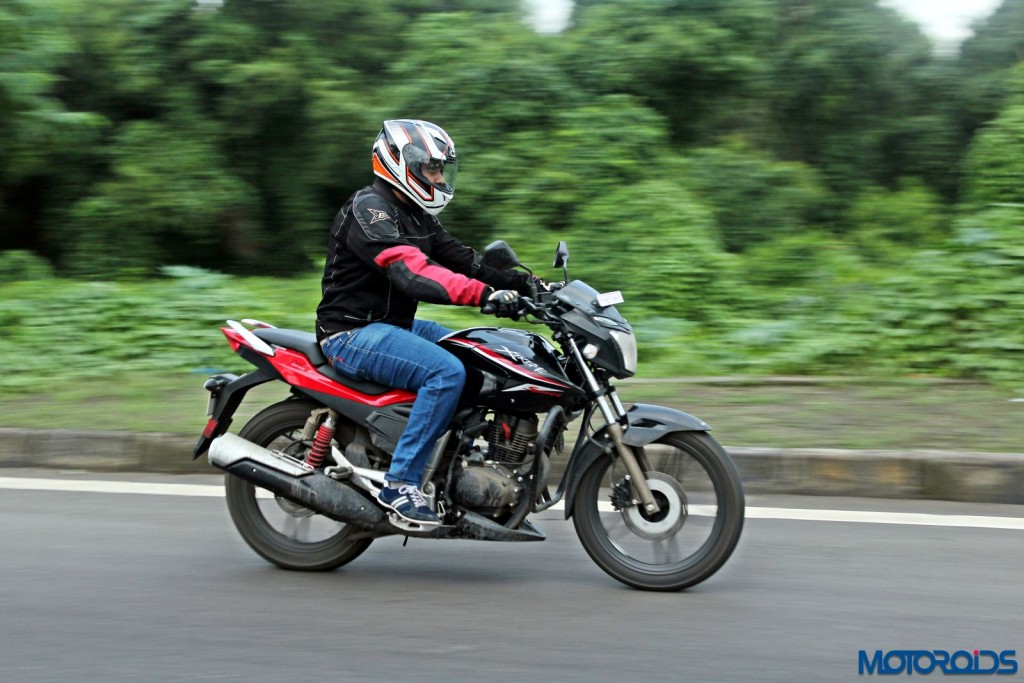 The ergonomics are comfortable and friendly for city commutes

Nought to sixty comes up in a little over five seconds while the motorcycle shows potential to reach the claimed top-speed quite efficiently. The engine has got a sporty grunt which I particularly liked, especially after the 7,000 RPM mark, with a pleasant step-up in performance. The sweet spot of the rev band lies between 4,000-5,000 RPM where the tachometer on the new Xtreme Sports, in top gear, points at city speed limit of 50-60 kph and a little twist of throttle can let you overtake the vehicle ahead of you with ease. Riding at three digit speeds is not much of an issue but the motorcycle feels comfortable to stay around 80-90 kph mark in the top gear. The five-speed gearbox is pretty crisp and precise. 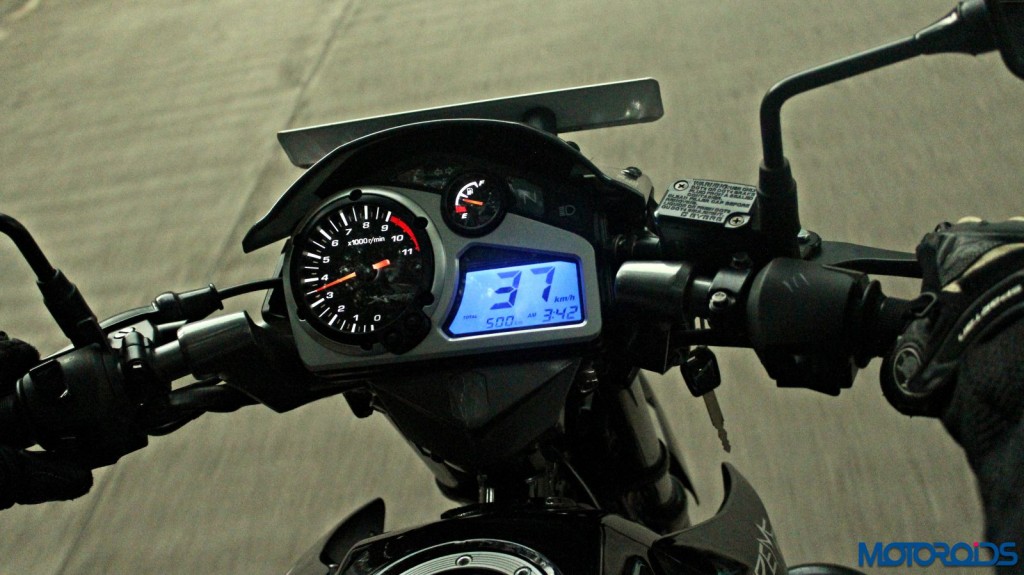 The motorcycle can rev all the way to 9,000 RPM band but the experience isn’t as pleasant and refined as one would like it to be – which is a bit of a let-down. The tingling starts to appear at as low as 4,000 RPM and it multiplies as one climbs the rev band. That being said, the test motorcycle that came to us had very few miles clocked on the odometer and by the time we returned to motorcycle, the vibrations were noticeably lower. The vibration bit came as a surprise as the 2014 Hero Xtreme felt commendably refined and had very few, forgivable quivers post the 7,000 RPM mark. 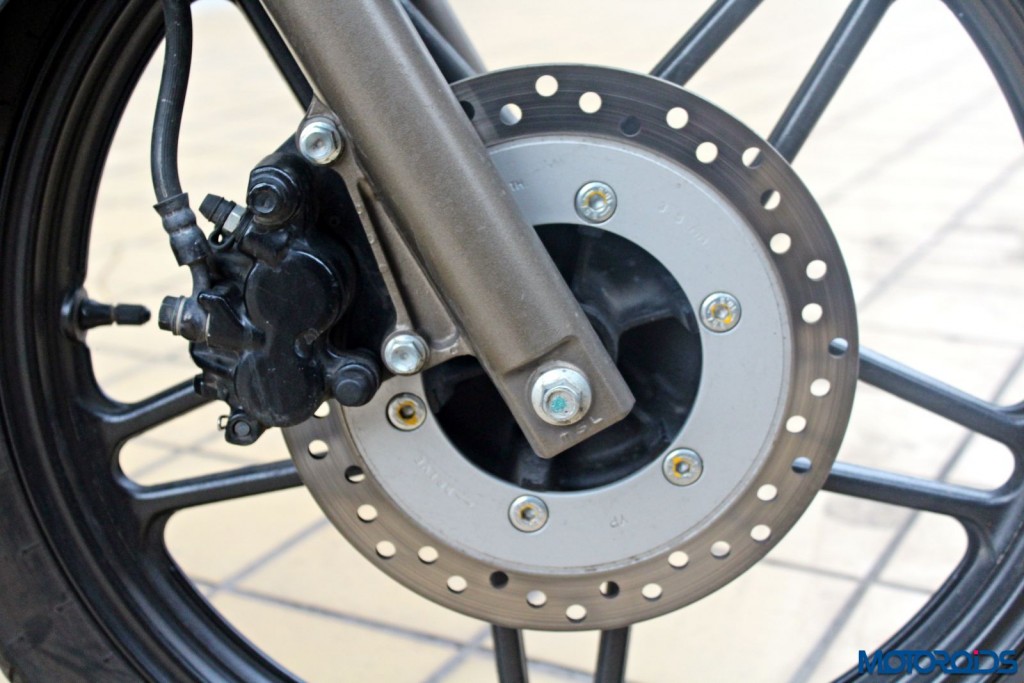 The braking department did not witness any upgrade and still continues with the twin-pot 240mm discs upfront and a 220mm disc (optional) at the rear. We are not demanding bigger discs but a combined braking system, similar to what we saw on the new Hero Maestro Edge, would have been a great add-on. Maybe we will see that on the 2016 model. The MRF Zapper tyres are good as ever providing optimum  grip and feedback – while going hot on the accelerator, leaning the motorcycle into the corners or dropping the anchor – at all times. 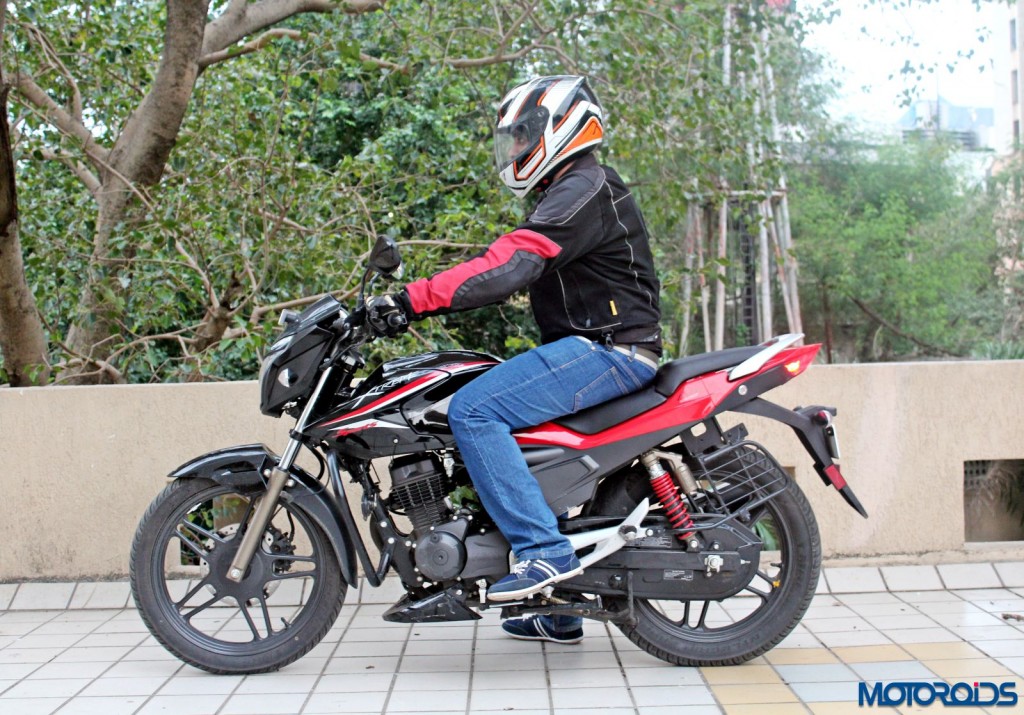 The ergonomics remains almost the same as on the previous year’s version. The clip-on handlebar and centre-set foot-peg position is unchanged and the ergonomics remain rider friendly. The rider triangle is just right for the segment and we have no complains about it whatsoever. Steering the motorcycle from heavy city traffic is not an issue and the motorcycle changes direction with utter ease. The Xtreme Sports is slightly on the taller side which may cause some issues especially if you are height is below 5’4″. 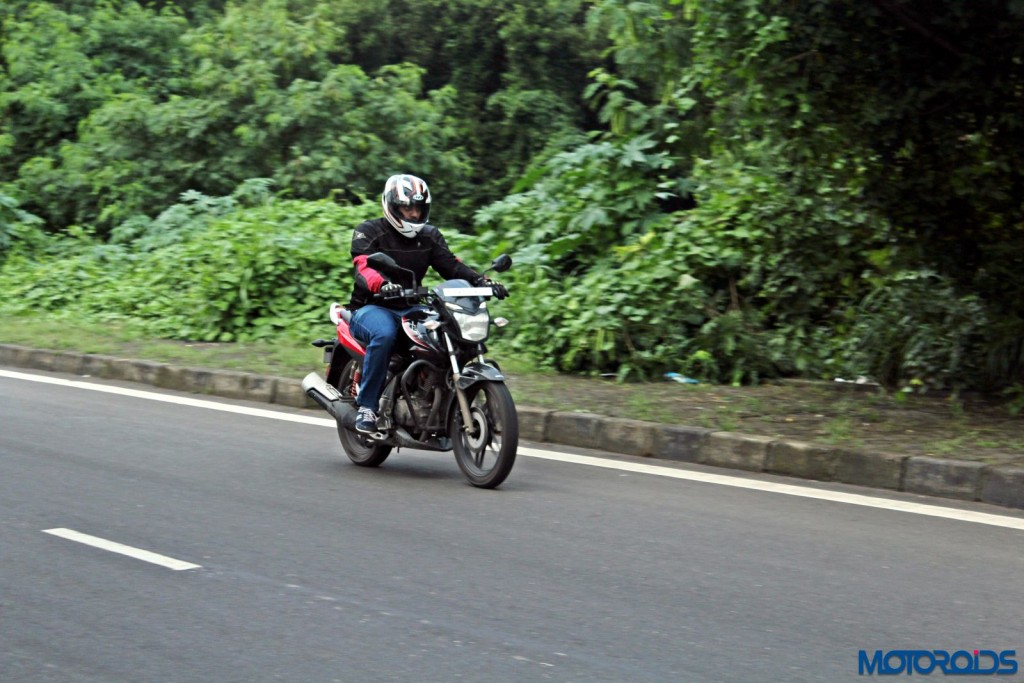 The split seat is comfortable and plush and the new Xtreme Sports didn’t feel tiresome, even in heavy city traffic. Adding to the comfort are the telescopic hydraulic type suspension upfront and rectangular swing arm with 5 step adjustable gas reservoir shock absorber at the rear. Yes, there is still no mono-shock which is seen on Xtreme Sports’ arch rivals such as the Yamaha FZ-S or the Suzuki Gixxer 155 which was a bit of a letdown but the five-way adjustable suspension at the rear can be adjusted to one’s preference and the units did a commendable job soaking up the uneven, broken surfaces in the city efficiently. 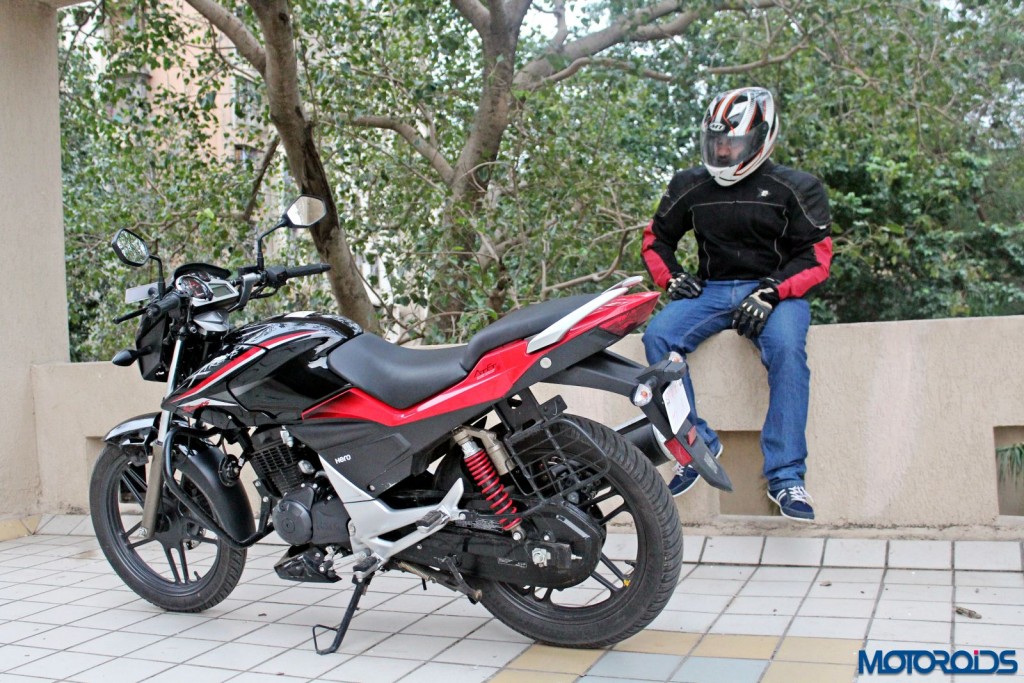 The new Hero Xtreme Sports is a major leap over the previous generation model, especially with the added punch in performance. The new Xtreme Sports – with its unconventionally placed keyhole, absence of engine kill switch and the lack of refinement (at least in the initial miles) – may not be at the top of the pyramid in the segment but Hero MotoCorp’s build quality and the well spread service network does give this new motorcycle an edge over the competition. 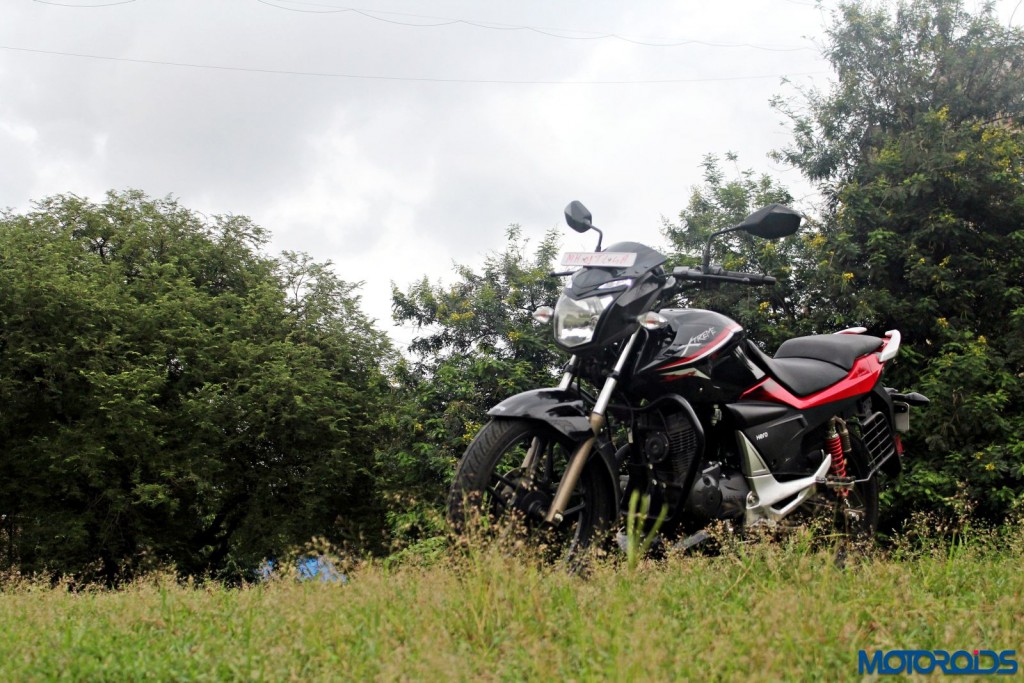 The motorcycle will be sold alongside the Hero Xtreme and will carry a minuscule premium – quite literally – over the 2014 model which is worth the upgrade – a bargain in which you get more power and better aesthetics but lose some key features such as the USB charger and the engine immobilizer. The Hero MotoCorp Xtreme Sports comes in five colours options – Fiery Red, Panther Black, Pyro Orange, Mercuric Silver and Black & Red. Similar to last year’s model, the new Xtreme Sports comes in two variants and carries a premium over the 2014 model:

Here is a detailed image gallery and tech-spec sheet that would help you understand the motorcycle better. Do let us know your views about the new Hero Xtreme Sports and the review through the comments section below.