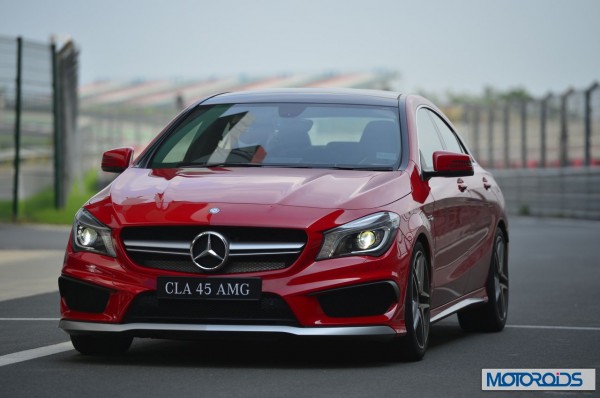 A typical Mercedes customer can be imagined as a successful businessman or an investment banker dressed in a sharp suit, someone who drives the three pointed star to his weekend game of golf. However, add an AMG badge and the entire scenario transforms into a dramatic picture filled with tyre smoke and a growling engine. The pleasant greens of a Golf course are replaced by a race track, while those sweaty palms are busy holding the steering wheel in ten minutes past ten position instead of ensuring firm grip on a Golf stick. 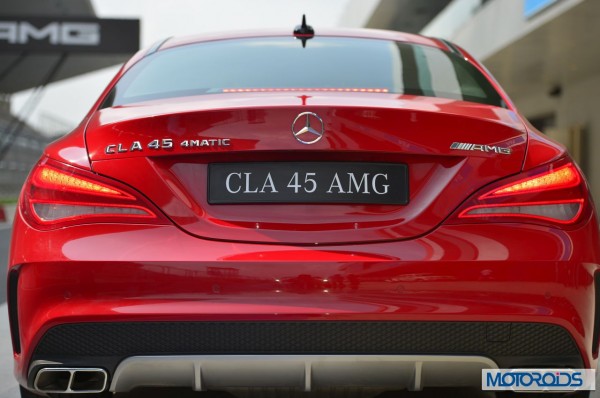 AMG is the ‘add madness’ division of Mercedes that transforms a well mannered and polished executive sedan coming out of the Stuttgart facility into a fire breathing, rubber burning monster. For cars which are slapped with an AMG badge, being propelled by an axle breaking V8 or a V12 is the norm. However, this time they took a different approach to things and have managed to plonk the most powerful 4-cylinder engine ever seen in a production car. 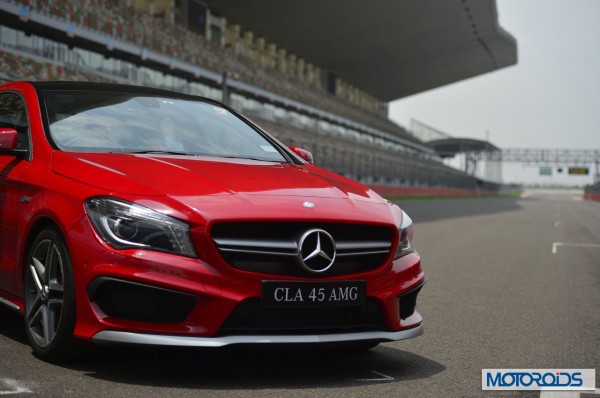 The CLA 45 AMG is absolutely stunning to look at. It’s sporty intentions are further accentuated with a coupe like design, a sloping roof line, pillar less doors, quad exhausts and Red brake calipers behind those chunky 5-spoke alloys. Up front the big Three-pointed star is slotted between a twin-blade radiator grille painted in Matt Titanium grey and along with those large air intakes in the bumper; it will make for a pretty sight, or rather a glimpse in your rear-view mirror. 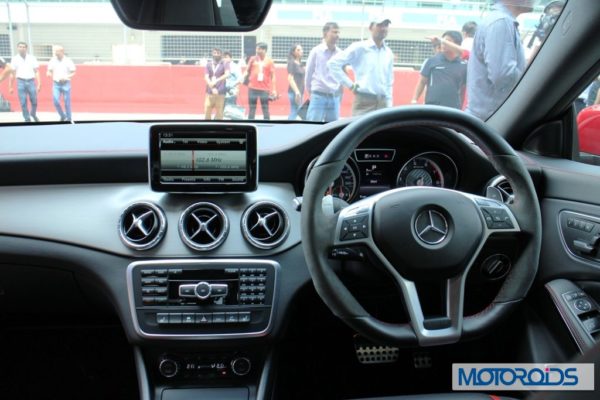 The sporty intentions manage to filter through the cabin as well. The AMG performance seats not only look great but provide good lumbar support and hold you firm around fast corners. Needless to say, they are electrically adjustable so that you can get that perfect driving position to set the track on fire. The AMG steering wheel with red stitching and its flat vertical ends looks inviting, while the Red designo seat-belts remind you it isn’t a plain Jane Mercedes every time you pull it before the drive.

The Buddh International Circuit was a perfect setting for testing such a machine, although we were taken around only for a couple laps, which included a sighting lap behind a Lead car and here is what we observed in the limited time we spent on the track. 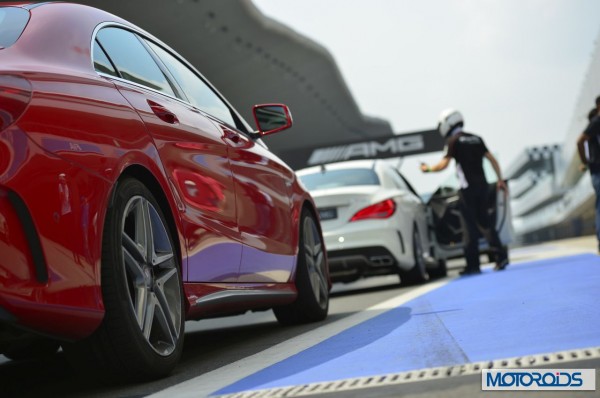 The car takes inspiration from the 2014 F1 season and lacks the signature growl of an AMG. The sound of Gods clearing their throats is now replaced by something that sounds muzzled, which is understood, given the fact that this engine is four cylinders down from a regular AMG. We did like the way the exhaust sputters during deceleration though. While the car might have lost its ability to sing heavy metal, it still remembers head-banging. It picks up speed like no other 4-cylinder engine we have driven before and managed a comfortable 220 kmph on the back straight. The number could’ve been fancier, if we could manage a faster exit just before the straight. 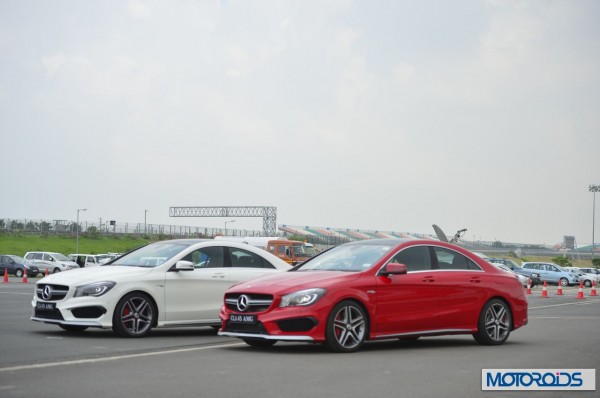 At Motoroids, we keep driving various cars at the Buddh International Circuit. However, the last time I personally drove around the BIC was in the VW Vento at the Polo R Cup Media Race. However, comparing that experience to the CLA 45 would be akin to comparing a pleasant warm shower with a blazing inferno. The CLA 45 hits 100 kmph in 4.6 secs, which is as quick as a V-12 powered Aston Martin DB9 (by monique). Part of the credit for such a quick time to the ton goes to the quick shifting AMG 7-speed sports transmission which also features a double de-clutching function. However, starting from the pit-lane meant we could not test the race start system. 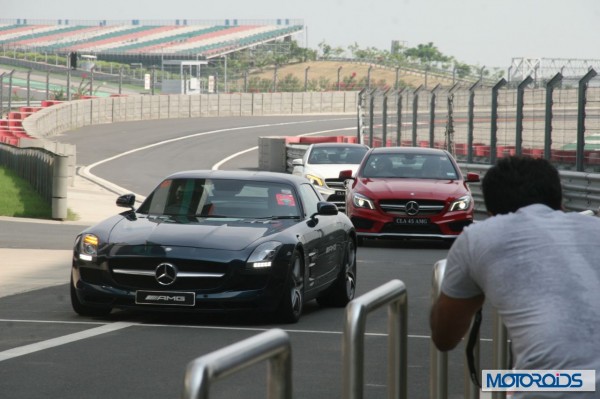 Going around the corners, following the lead car which was an SLS AMG was not a hard task. The CLA 45 AMG held its line well, the tyres grip like leach. The chassis is taut and agile, though we experienced a bit of understeer.

It still needs to be seen how it performs in the real world though, how the sporty AMG suspension holds up to our bumpy, pot hole ridden roads and if the puny 2.0 litre 336 bhp engine stays reliable in bumper to bumper traffic during Indian summers. 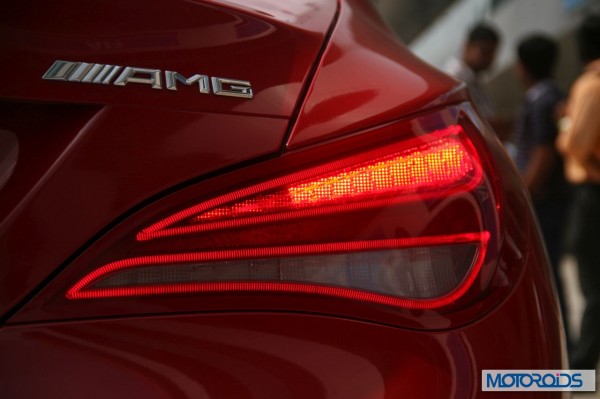 At Rs 68,00,000, the CLA 45 AMG isn’t cheap, but for those looking to purchase a fast car with an AMG badge, it presents a rather strong case. The 4-cylinder engine and the Compact Performance tag might make that potential buyer scratch his head. However, one test drive and all those thoughts will disappear within the smoke those tyres leave behind.

Next page for more details about the CLA45 AMG, the event and a detailed image gallery>>> 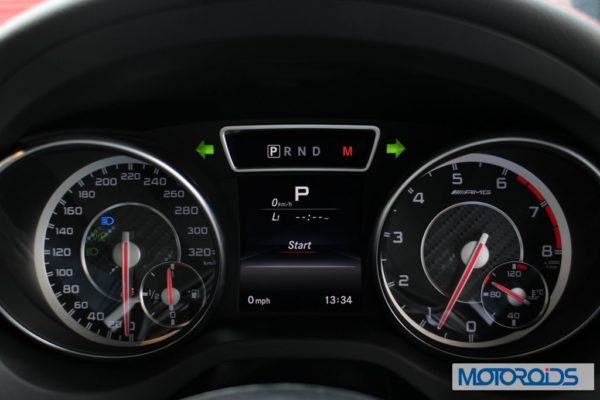 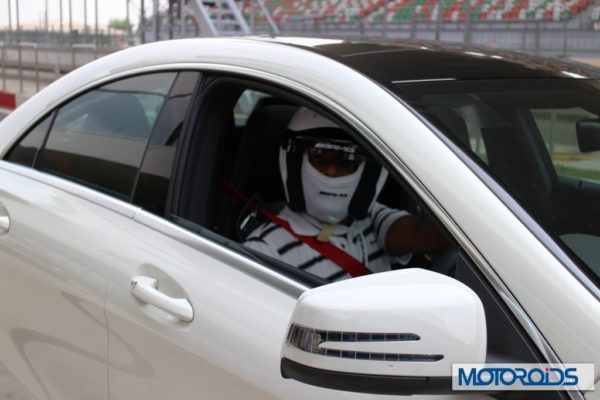 Safety is paramount. Drivers at the racetrack are made to wear helmets 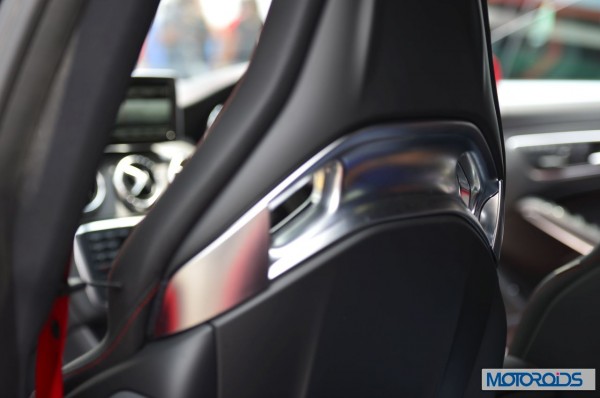 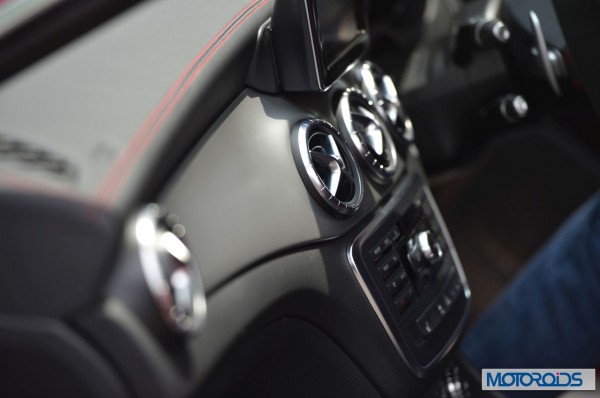 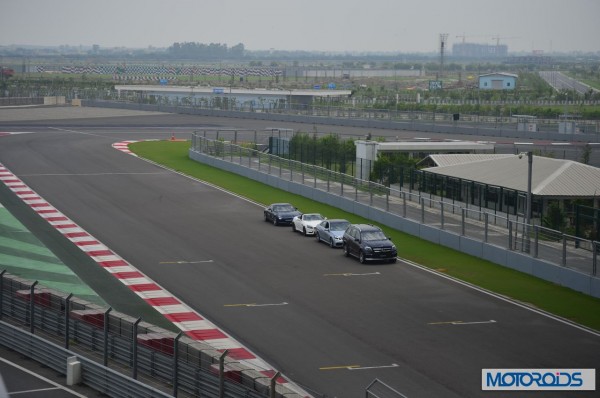 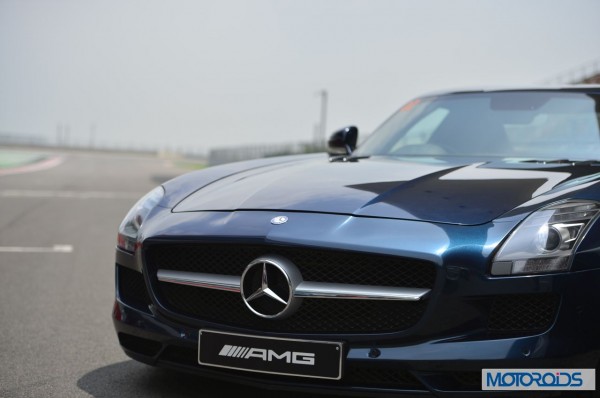 The big daddy of all AMGs, the SLS led the field for one of the two driver groups 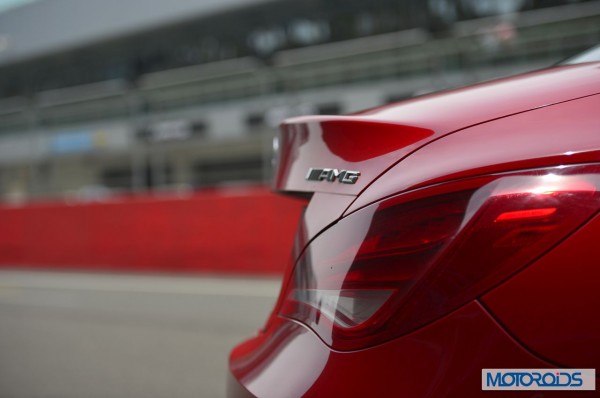 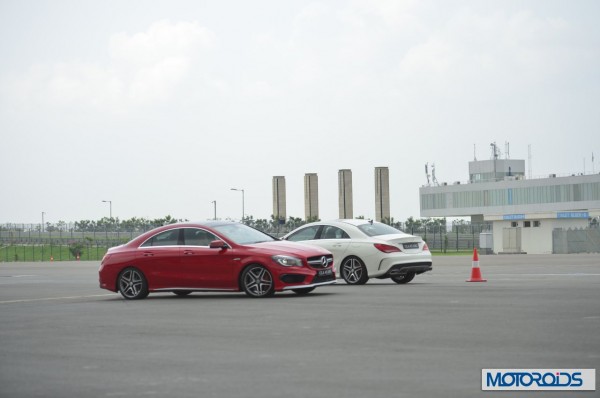 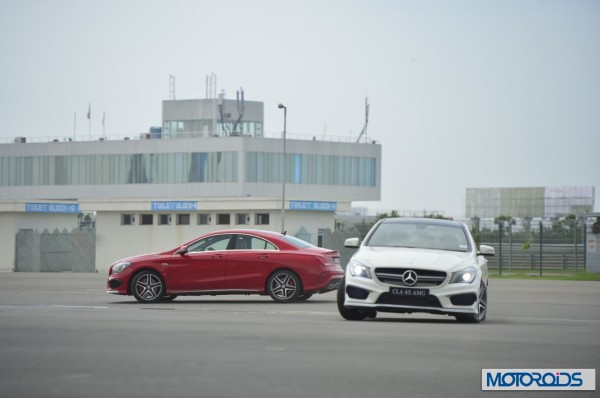 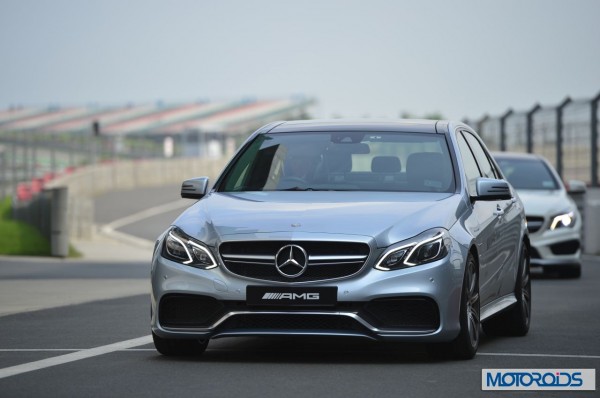 E63 AMG led the drivers in the second group 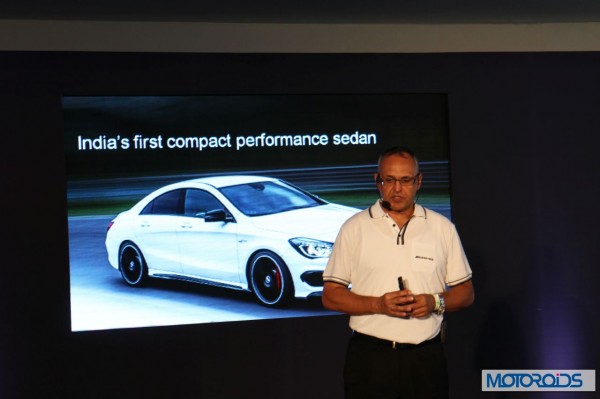 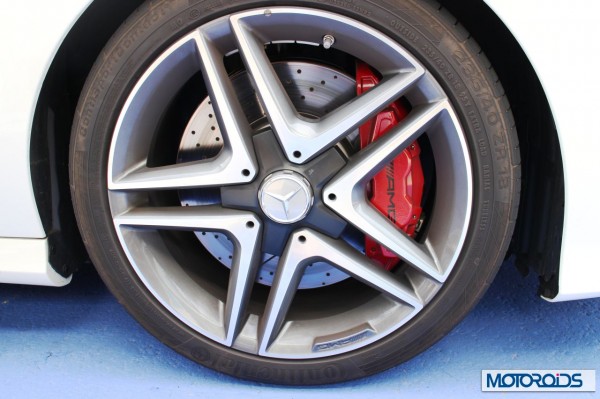 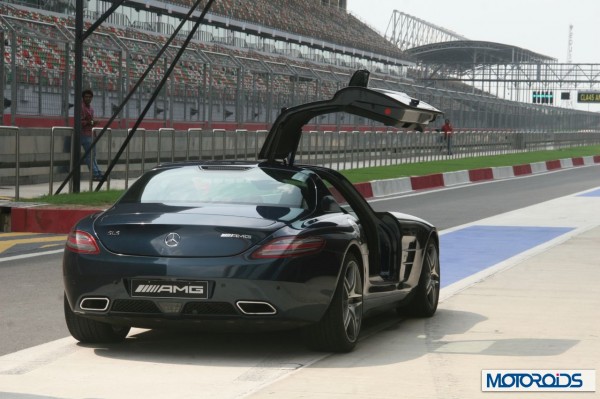 Exciting the C LA45 might be, but we would rather be seen driving that winged beauty