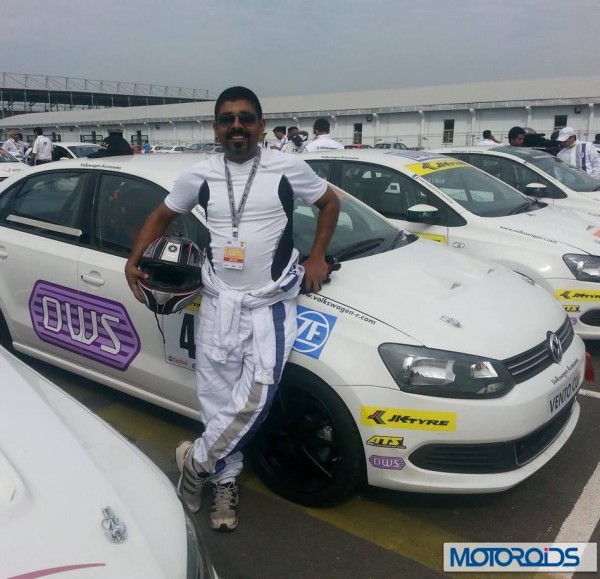 Our old time friend and Delhi representative Dhairya Gupta recently got lucky. He got a chance to drive the VW Motorsport’s Vento and Polo cars in a special race event organized only for media. Teaming up with Auto India’s Cyrus Dabhar, he managed to finish second overall. Here’s a log of his experience in his own words. Over to Dhairya… 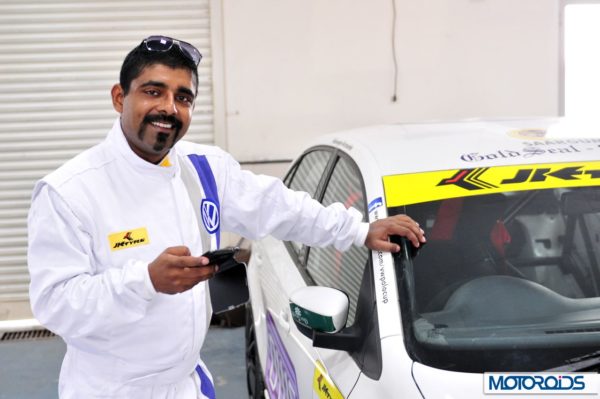 Sometimes the best of opportunities come knocking when you least expect them. I was at the Election’s office collecting my updated Voter’s ID and planning to go back to a usual work day. I get a call from PR agency asking me if I can make it to Buddh International Circuit in 2 hours. That is the time I need to get there. Fortunately things worked out and I was the BIC with a PR agency personnel. Filled and submitted the forms along with the schedule.

The whole Media Race event was almost a three day thing. First day was just paper work for registration with FMSCI for racing license and other formalities and next two days for race. 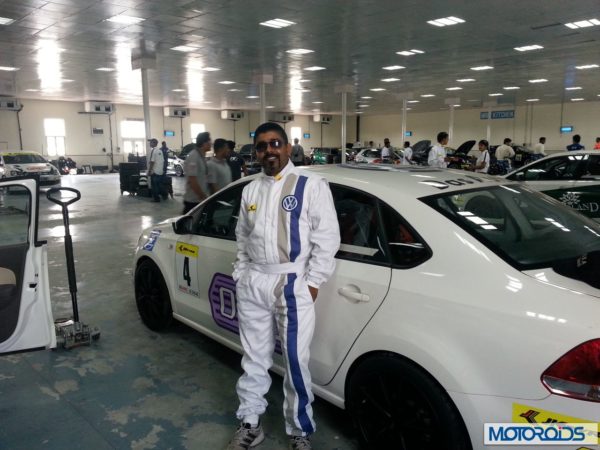 I have raced in Raid De Himalaya, though I did not finish, I had to undergo not only a lot of paperwork but a lot of practice, getting rally insurance, high risk insurance, getting the bike modified for the race and then investment of time and money in the bike every time I went on recce worse if I had a fall. However, this was an opportunity where I did not have to worry about getting the car prepared, fixed, or crashing it. Not that I intended to. The first outing with a race car was with Polo TSI on the very track in May and you can read further about how these cars are different compared to road going one’s and more about Polo R Cup. 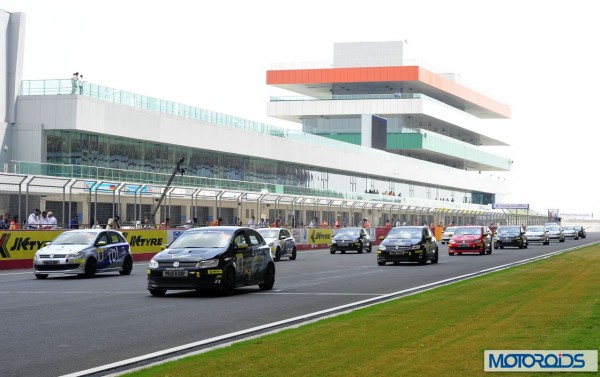 On the practice day, the day started with Volkswagen Motorsports telling us about the race format. We will be racing in teams. There were two very different cars – 1.6L Petrol engine Vento used in Vento Cup and Diesel powered Race Polo Tdi – the one used till last season in Polo R cup. One team would comprise of a Vento and a Polo. The points will be added for both the racers and the prizes would be given whichever team scores most.

My partner was Cyrus Dabhar. I would be driving the Vento and he would be driving the Polo. Once the teams were assigned, we went for a safety briefing in the race control room. I have never seen so many screens on a single wall at the same time. Though this was not the first time I was driving on the track, it was every important to understand the various safety procedures and protocols because things change during a race and by not following the safety protocols, one might be putting other people in danger.

Soon we were exiting the pit lane behind the leader car. This session was meant to acquaint us with the track, the corners and other aspects. It was kind of a recce of the track. We went back to the briefing room for ‘Race Drivers Coaching Program’ by none other than Mr. Akbar Ebrahim – whose protégés include Narain Karthikeyan and Karun Chandok. We were told about how to brake, when to brake, when to turn and when to be back on the accelerator, how to identify the line etc. 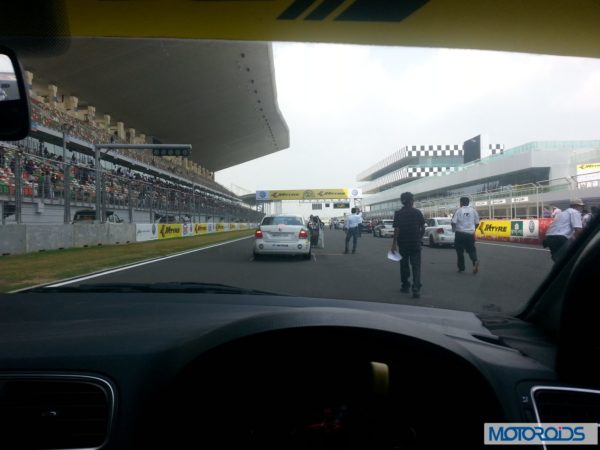 Being front wheel driven cars, the grip available is limited, with the front wheels doing all the work – steering, braking, accelerating – especially when with the road going tyres. After the briefing we were each assigned an instructor. The instructors were racers in Formula BMW. We got into the ‘stunt cars’ since they still had all their seats intact unlike the race cars. They showed us the racing line around the track. BIC is one of the longest and widest tracks among all F1 circuits. While this is great for overtaking and gives you lots of space for going wide, one also tends to get lost and chances of following the line go up which means improper turning point, missing the apex and hence losing time.

Having seen the track once with the instructors and a much needed lunch break, we went back to the track for a practice session. I was much faster and confident this time. Unfortunately two one person went into gravel but luckily this legend on motorcycles proved to be a legend in a car too the next day. I was able to squeeze out 5 laps in the stipulated time. One has to find the edge – the point between taking the car to maximum speed and losing grip. I could overtake Vento’s but did not even try to keep the Polo’s at bay. They were fast. The qualifying session the next day showed how fast they actually were compared to the Vento’s. 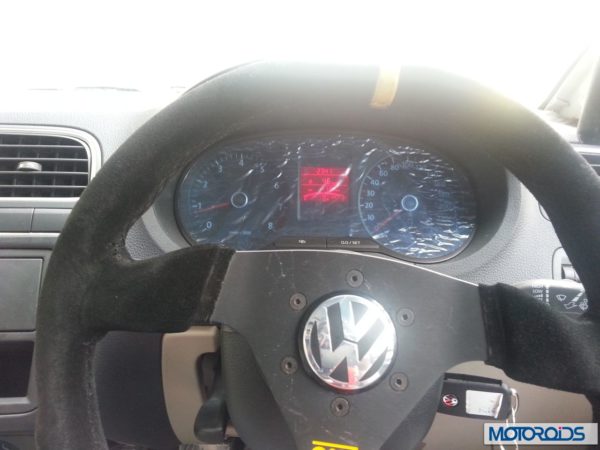 With the practice session over, I felt quiet confident though I did feel I should’ve been faster. We all went back to our respective home’s or hotels to get a much deserved rest after a hard day driving in racing overalls in closed cars on a hot day.

The next day we started early with a briefing session and instructions about how every second counted just not on the track but off it. You have to report on time into the cars, get started and be on the track like clockwork. With so many races – the JK Racing Championship, Polo R Cup, Formula 4 BMW going on, keeping up with the schedule was critical. It reminded me of my RDH participation last year when we have to report to Parc ferme at 04:30 in the morning no matter if you were working on your bike till 2 in the morning.

This is the difference between racing and casual driving and riding. But this discipline is part of the fun – keeps you on the edge. We had plenty of time to report and I drank quiet a lot of water as I was going to be baked inside a car for 30 mins. My first lap was slow but I gained pace steadily and by third lap I had overtaken two Vento’s and I knew I was not going to be the last to qualify. I was quiet confident that my fourth lap would be fastest but I faltered with the gear shift on last turn – Turn 16. 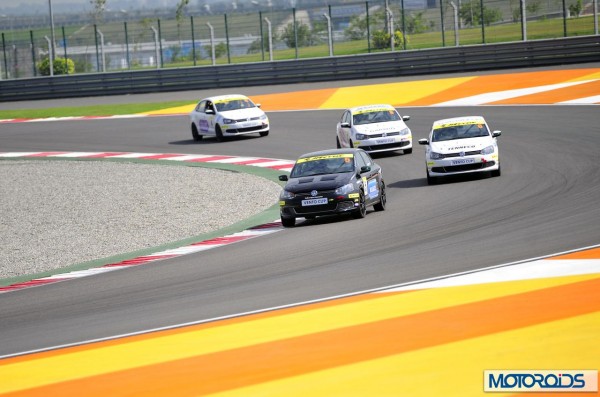 On the next lap I was again gunning for it and in a bid to catch up with a Polo, spun at chicane – T8 and T9. For the next lap I tried not to lose control or grip. I qualified 13th overall among 16 but 5th among 8 vento’s. The Polo’s were on top of the list with fastest Polo being a good 15 sec faster than the fastest Vento. Though given good instructions about the ‘parabola’ Turn 10-12, I was still confused on that and took some time to understand it. There are two apexes within it though people are tempted to take one smooth curve along it. One can actually do that but it would be much slower. I was most confident in T5 – T9 section. 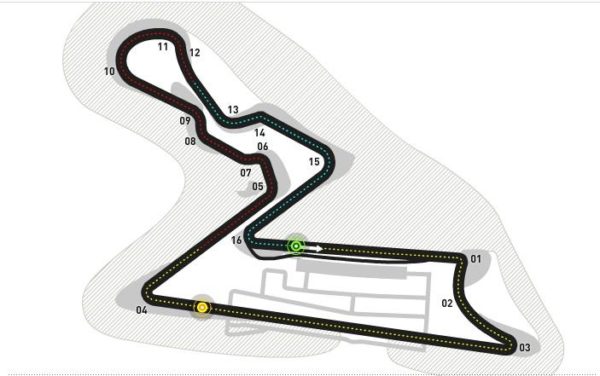 The actual race started about two hours later. In those two hours we attended other sessions and some of us were asked to report to race marshal – because we had crossed the white line while exiting the pit. With a warning we were let off. We again got into the cars for the main event. I think I spent more time waiting in the car before the race than I did during the entire race.

When we finally lined up at the starting grid, I had the biggest anxious smile on my sweaty face. Having spent a lot of time on saddle riding in heat through different terrains, this was sweat experienced at an all new level – wearing heavy cotton race suit, closed inside a cabin in Delhi heat. Any how, this was not a time to think about that. It was about getting a perfect start and keeping the pace high through 6 laps. 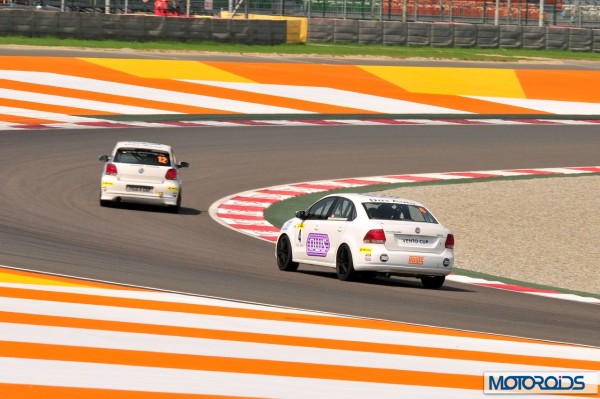 One of the best experiences of my life was when I took my start at RDH last year and this was definitely one of those moments I will never forget. I lose count of how many times I have seen the starting grid from a F1 driver’s perspective. However, seeing it myself, albeit in a stock car made me get really excited. I was thinking – do not get a spinning start, shift up quickly after a perfect start, start braking early as being in the back meant I will have sea of cars at T1 in front of me in all directions. What happened next, I was not prepared for. I did get a good start and I did overtake two cars but then I noticed a Black Polo smoking its tires right in front of my eyes almost stalled. Later on I found out, he had engaged the reverse gear at the start and was now getting back on first trying to roll. I braked and went through the left of the car. But I had slowed down considerably out of almost panic situation and ended up being last at the exit of the first turn.

By the time I caught up with two cars, the lights went yellow. Safety Car was out. Two cars had crashed into each other at T8. We drove for two laps behind the safety car. Though driving slowly, it fatigued me more because of the increased time on a lap and disappointment. Soon the safety car was out and we gunned it. Tyres were screeching and hearts were racing again. I tried to do my best in the remaining 4 laps. After the race, I had way more respect for everyone who races on track as well. I was dehydrated – parched lips, dry hands after just an hour on the lap that two with a brake. Race driver spend much more time driving in harsh conditions under all those layers of clothing. 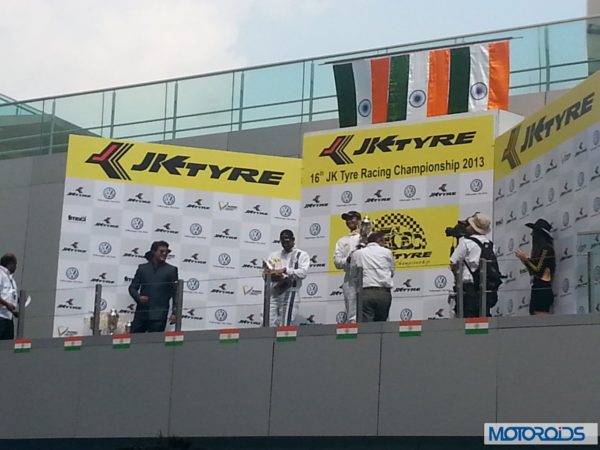 When the results were announced, I and Cyrus had finished 2nd as a team which Cyrus was 2nd overall as well. As for me, well it was one of the greatest moments of my life and I believe I should get more track time.  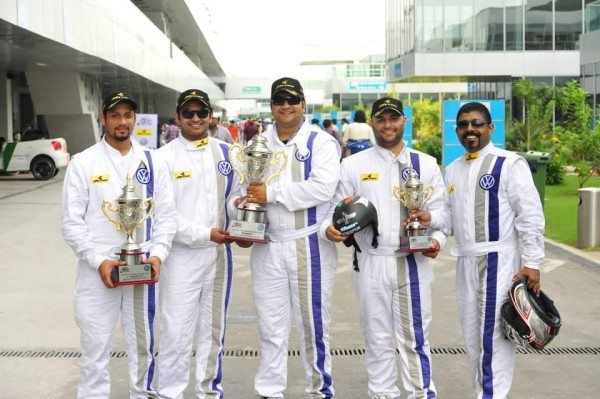 ‘Driving/Riding on a F1 track’ should be in the bucket list of everyone who call themselves petrol heads and I am pretty sure it is. Luckily, I can say I have already checked that box. However, it ain’t easy. Most of us were very tired at the end of it, I was dehydrated and had barely any energy left after spending about 40-50 mins in the car. I have way more respect for race car drivers now. No doubt race car drivers and motorcycle riders are one of the fittest people in sports.

Special thanks to Volkswagen Motorsports for organizing the event and giving us a chance to experience road racing like no else. We really admire their quest for encouraging motorsports in India.