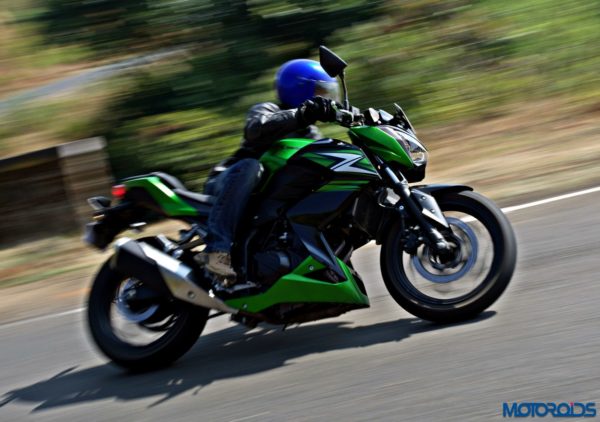 As the sun set over the outskirts of Pune, I took one last go at the Kawasaki Z250, the 250R’s street-friendly cousin.  I promised myself that it would be the last one for the day.  As I winced from the blood gushing back, I cursed the seat and asked myself why I am letting my already sore bottom endure one last dab of torture.  You see, the Z250 isn’t exactly a very fast motorcycle. It isn’t the most comfortable either. It is, however, a bushel of fun. Let’s find out why. 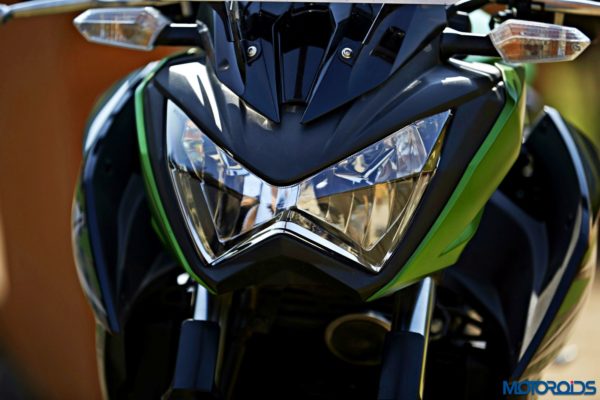 That sharp fairing’s distinctive; pinched-in-the-middle head lamp design trickles down from the Japanese manufacturers, bigger, brawnier cousins – the Z800 and the Z1000. The Z250 does turn discerning heads, especially in that satin finished lime green shade that every Kawasaki worth its salt has been brainwashed to wear.

[Oh, and like the Er-6n, those lamps stay on all day long (DRLs) , with fellow riders giving you the infamous, hand signal] 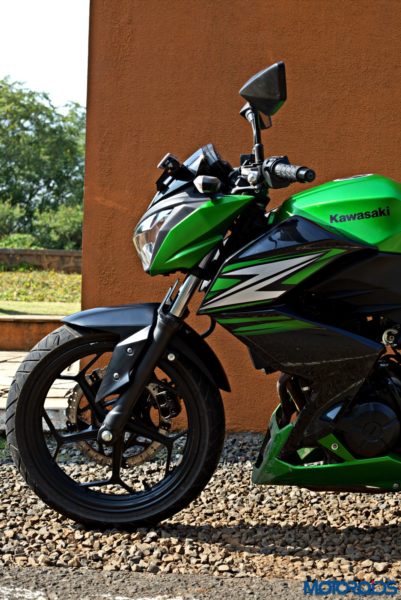 The Z250 is a half-faired motorcycle. That half-fairing is actually a huge, mutilated Z, with another Z sticker on it. Weird, isn’t it? Maybe Kawasaki took the name too literally, but it actually looks pretty sharp in the flesh. The big Z panel is joined by one more sharply styled panel below, which doubles up as the under body cowl. 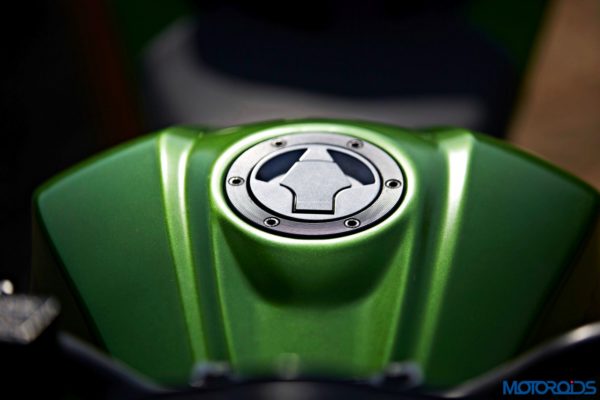 The 17 liter tank and the tail section however (shared with the fully-faired 250R), have been dealt with a slightly deft hand, because the surfacing on those parts is more organic and bears smoother curves. 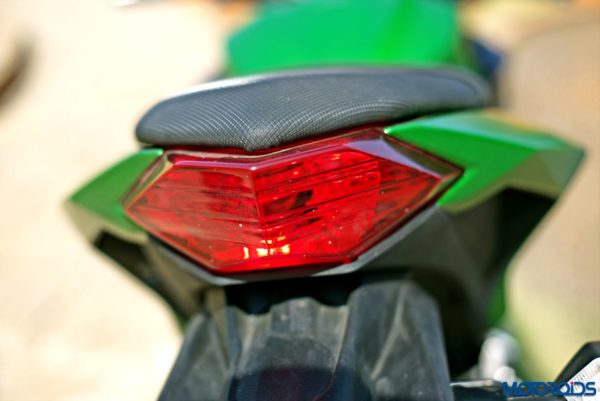 The back ends in a rather simplistic, non-LED tail lamp. 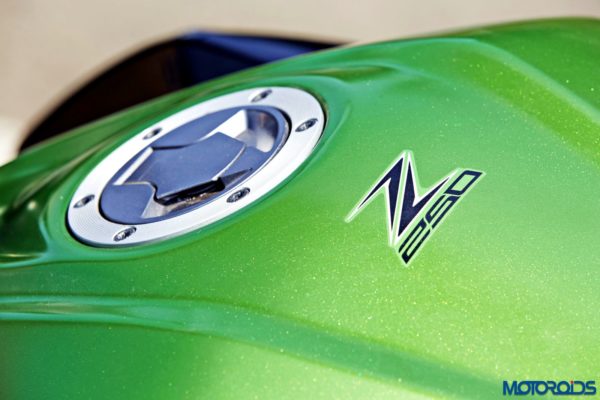 Aircraft style fuel filler cap, and the only Z250 badge on the whole motorcycle. 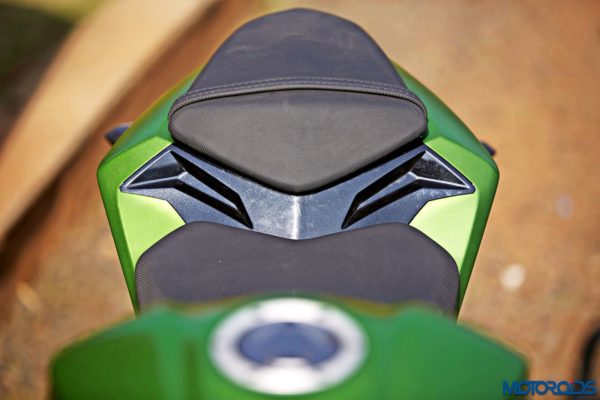 The split seat may look cool, but it’s like shifting your weight sitting on a bar-stool. The hard foam is only there to grip your gonads and bottom. And there are no grab rails. 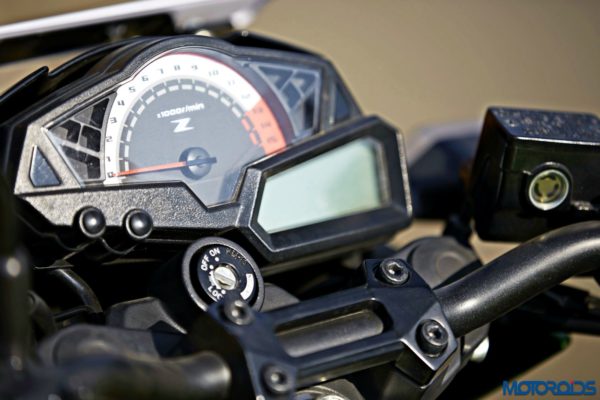 The instruments are laid out neatly; with the rev counter red line starting at a high 13,000rpm. Also included are a digital speedometer, trip meters, fuel-gauge and a digital clock. 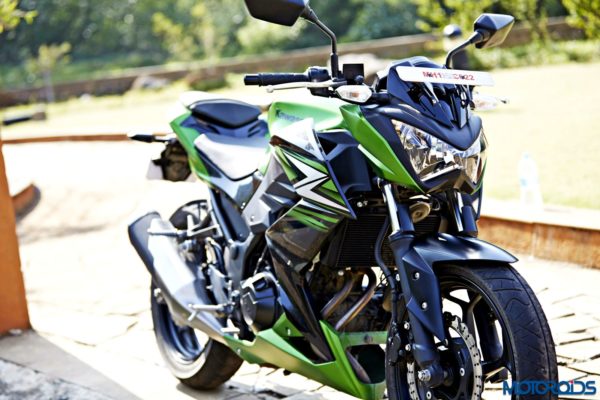 The bike isn’t searing to look at on first sight, like the Z1000, but take a break and absorb the body-work in the fleeting sunlight, and you’ll find a splattering of sustained aggression holding the motorcycle together. 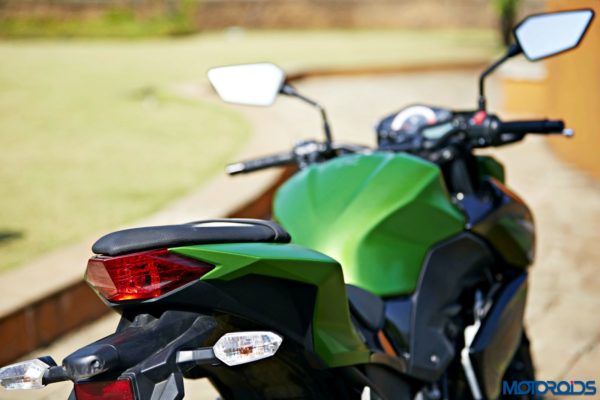 Get astride, and the Z250 gives off a distinct big-bike feel. You know where your money is going here, at least size wise. The riding position is mildly aggressive, with the rear-set foot pegs and forward set handlebar. 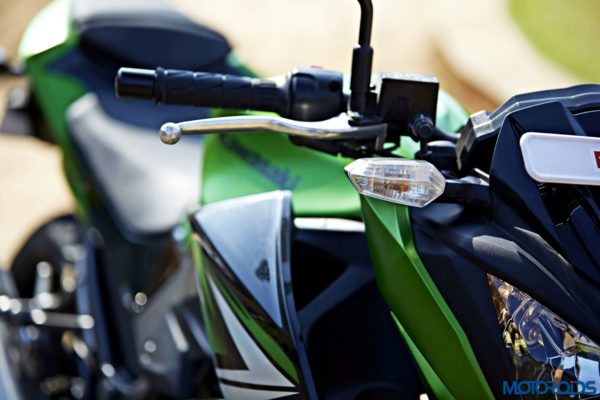 Build quality is top-notch all around.

>>Next page for ride and handling>>

But enough rants on the way it looks, let find out about the motor. 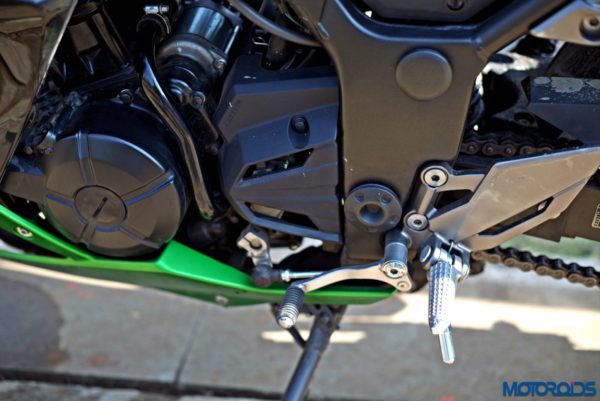 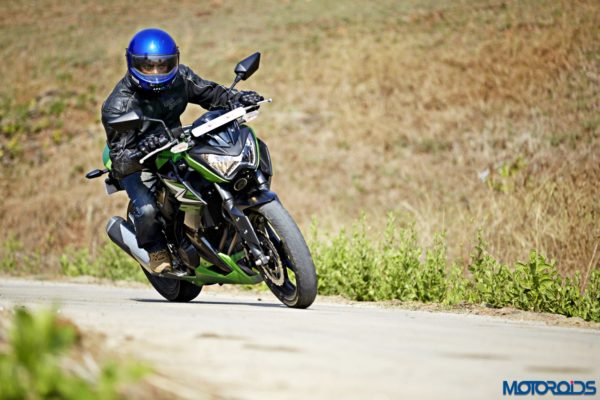 Ride away, modulating the beautifully weighted clutch and the engine’s characteristics show – all the power and torque is accumulated in the upper reaches of the rev range, even though it has been slightly re-tuned for city slicking. With the motor spinning lazily, the Z250 is tractable enough in the city, but sometimes it leaves you wanting for more, with the bike balking at slow speeds in higher gears. 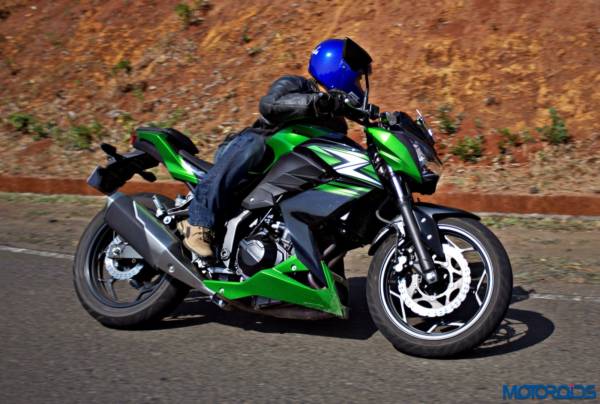 But all that is forgiven, when you truly smack that throttle open.

[It revs till a piston-melting, ball-sack shriveling 13,000 RPM]

Which my friends, is quite rare around these parts. It’s quite a glee, that motor, especially when the revs keep on climbing, and then you realize that “Bloody hell, there are still 3000 more clicks to go”. Strangely (or not – it’s a 250 after all), the speedometer doesn’t reflect that ballistic euphoria happening between your legs. Still, managing the 150 km/hr mark isn’t too difficult, with the tachometer needle just shy of 13,000 clicks, the pistons slicing through the super annulated air inside the cylinder like a humming bird’s wings. 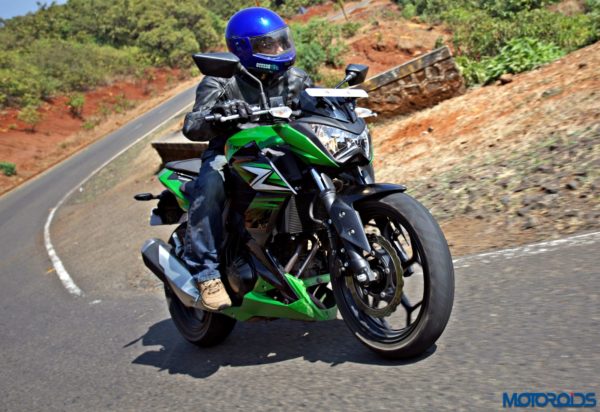 That’s precisely the cause of that one last run into the sunset. What makes it so special is also the shriek it emanates when you wring it even more after 11,000 clicks – the point when it makes peak power. And it’s all sugar-coated race-car noise, because the refinement is just stellar, unlike high-compression, snappy KTM motors. 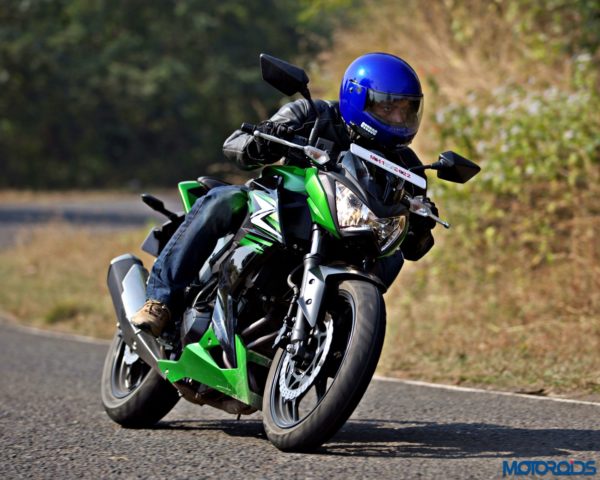 It’s like decade old VTEC motors; you revel in the experience of shifting late, not in the speed. In fact, it’s so good that you forget about how equally brilliant the six-speed gearbox is (1-down, 5-up). Shifts couldn’t have been more precise and smooth, and never gets in the way of fast, rhythmic riding. No clunks, no jarring here. Even on a wintry Pune morning, first gear was honey dipped.

That said, tractability in lower gears is a bit of an issue, as mentioned before, and it’s one of those motorcycles which revel in the higher revs. But it never gathers skin tearing momentum.

The motor is dope, let’s see how she rides and handles 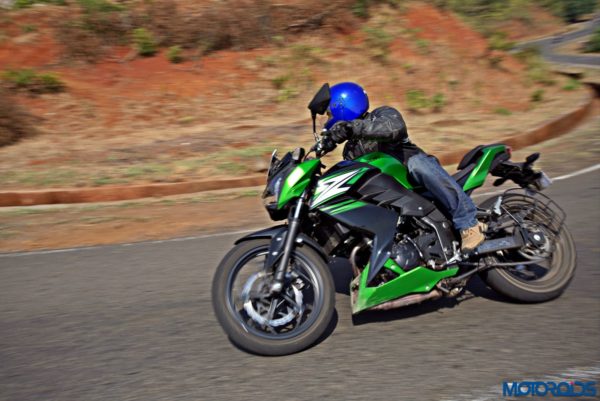 The Z250 is one of those bikes which are intrinsically well balanced. The slightly heavy front end plays spoilsport here, especially during fast turn ins, but apart from that, the bike is terribly playful. It never felt skittish and managed to shift its weight commendably.  The fact that it has big bike pretensions comes out when the going goes twisty. The chassis is very capable, and unfortunately, the low capacity, high strung motor tries to keep up here.  But that also makes it immensely engaging, having to play with the gearbox to make it sing its tune when darting out of bends. 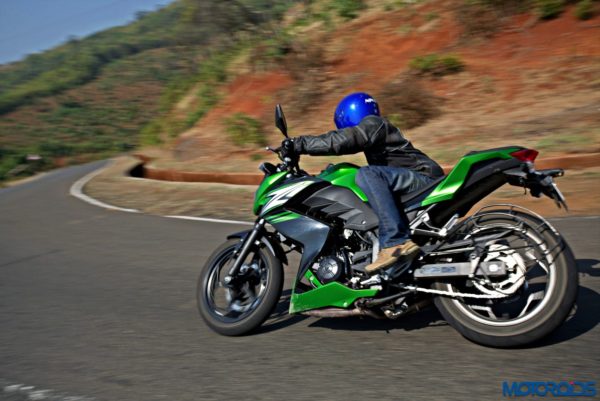 The Z250 uses a strong tubular steel frame and box section swing arm that work well to ensure good stability, and in case you’re wondering, it works. Show her the straights, and here’s where the heavy front end eats up the asphalt. The suspension comprises of telescopic shock absorbers in front and a mono-shock unit at rear, painted in black. Ride quality is acceptable, but don’t expect your shapely pillion to hold on to her Starbucks cup, like on the Suzuki Inazuma, which feels like Rolls-Royce Phantom EWB in comparison.

In urban confines, she’s quite maneuverable as well and quite effortless actually. Although to get some proper shove, you have to ride it by the scruff of its neck. 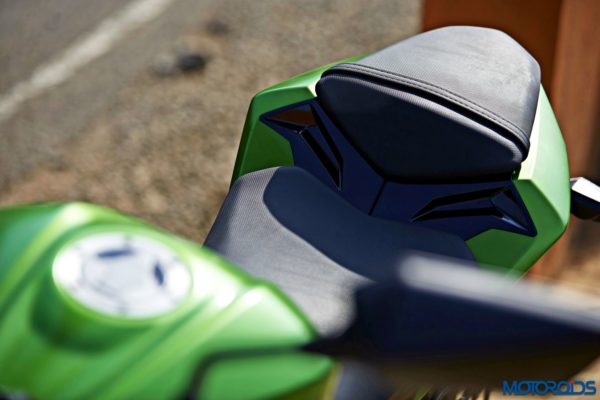 Oh, and again, the seats suck. 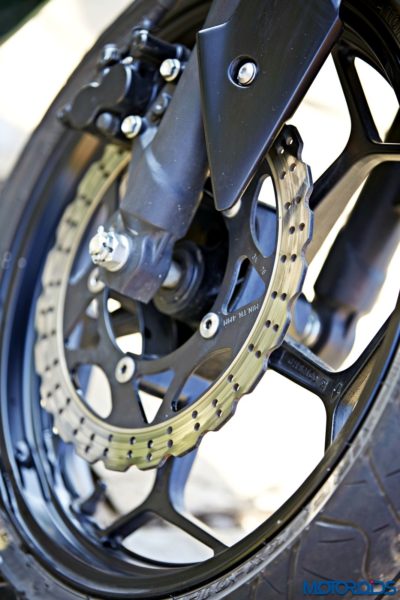 A single 290mm petal disc up front and a 220mm petal disc at rear haul the anchors pretty efficiently on the Z250. [No ABS here though]

>>Next page for verdict, specifications and image gallery>> 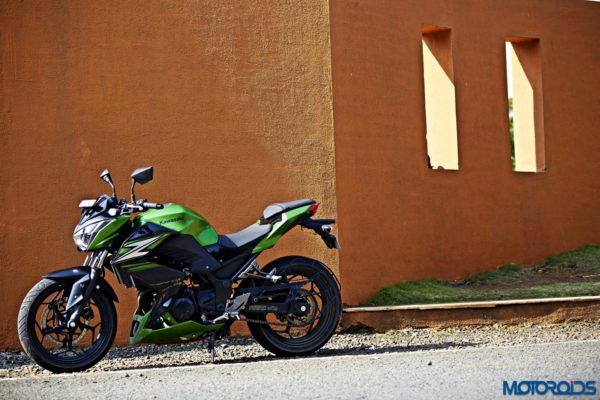 The Kawasaki Z250 is an extremely matured, well-built motorcycle. And a very usable at that, provided you excuse the hard seat. It looks menacing, but only when you stare. The highlight here has to be that motor – it’s like an apple tree which keeps the best and the juiciest examples only at the top. The low hanging fruits are juicy too, but the ones high-up are heavenly. The refinement of the whole package is equally impressive, and the best part is you can experience the rush to 13,000 clicks every day, anywhere, without running out of road, because it isn’t particularly fast, but definitely feels like it. Priced at 2.99 lakhs (ex-showroom, Delhi), it is on the pricier side, but considering the build quality, the superb refinement all around, the big bike feel, and of course, that sweet motor and the capable handling characteristics, discerning buyers will know where their money has gone.