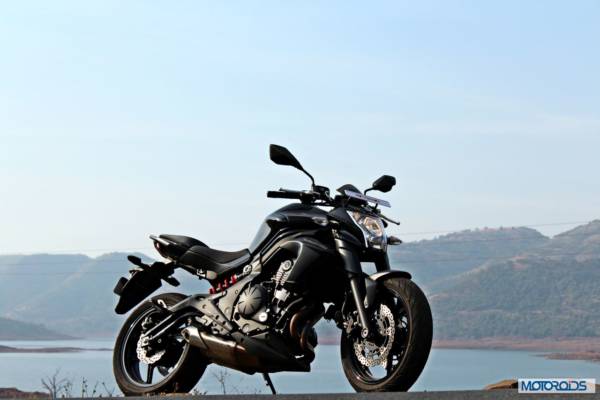 The Kawasaki ER-6n represents a slightly let loose, wilder off-shoot of the Ninja 650. It’s touted as a dual purpose machine, and is essentially the Ninja 650 sans the full fairing and a sprinkling of other small changes under the skin, or whatever that’s left of it. Let’s find out! 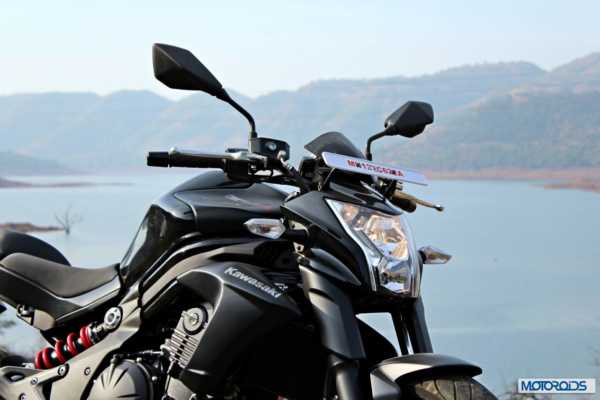 To put it in character, the ER-6n (650R in select markets) is the gnarly street fighter here, and manages to come across as one. Up front, all the bulk from the 650 (the full fairing) has shrunk to a compact, yet long-faced bikini fairing. There’s also a new under-body cowl, as well as a couple of svelte tank extensions. Two new shrouds covering the upper half of the conventional front forks complete the changes. Organically styled, the new elements compliment the tank and the tail section well, most of which is carried over from the 650.The swept back bikini fairing has a long head lamp which is a daytime running unit, and does the job pretty well. Other things that have been altered for the street is the instrument cluster and the exhaust canister, which is a rather likable minimal affair dominated by a digital speedometer and an analogue tachometer. 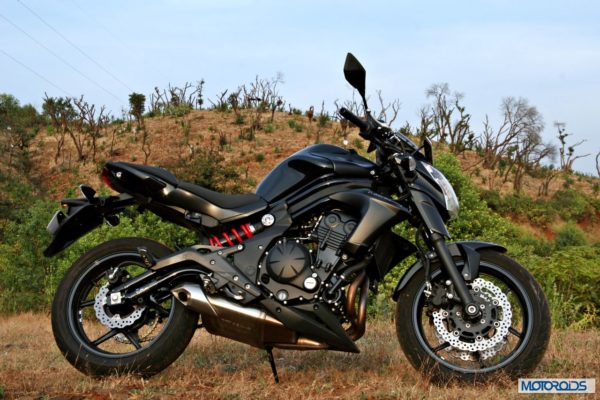 In India, the ER-6n is only available in metallic black, along with matt finish for the plastic elements which include the front suspension shrouds and the under-body cowl. We have to say the shade looks rather discreet, but can end up getting a little monotonous, with the bright red, single side-mounted shock absorber strut being the only highlight. We wish Kawasaki offers one in their trademark Ninja green shade as well. Like on all Kawasakis, the ER 6n is a well put together bike with top-notch build quality all round, including all the switch-gear. Both levers for the front brake and clutch are adjustable for reach. The front brake oil reservoir comes in a distinctive shape. 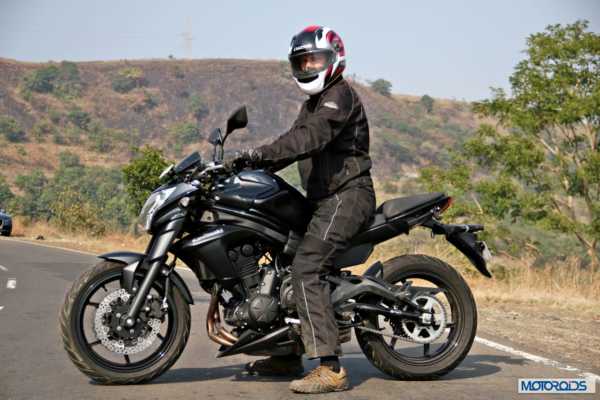 Get astride the ER-6n blindfolded and you’ll be forgiven for thinking that you’re straddling a much smaller motorcycle. The street-fighter manages to mask its 204 Kgs (wet) rather well, and that can be largely attributed to its mass being centered in the middle. In lieu of the character, the riding stance now becomes a bit more aggressive, with the foot pegs moving a little aft.

The ER 6n in pictures: 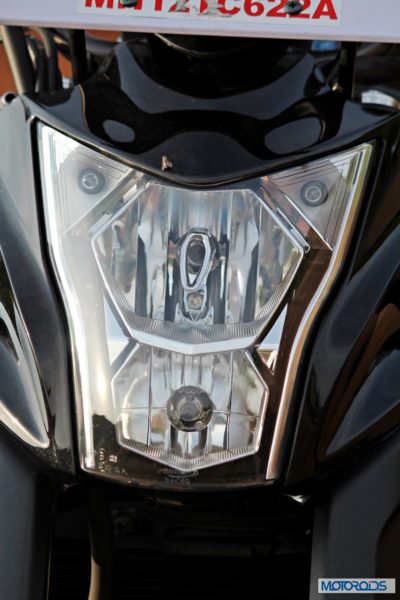 With the bikini fairing comes the swept back, long head lamp which looks the part, and is a daytime running unit as well. 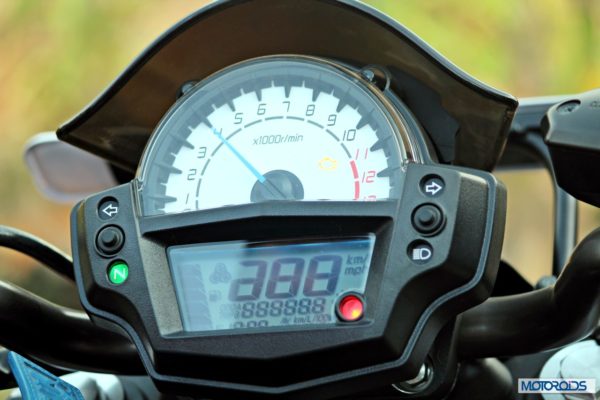 Minimalist, legible instrumentation to go with the street-fighter theme. 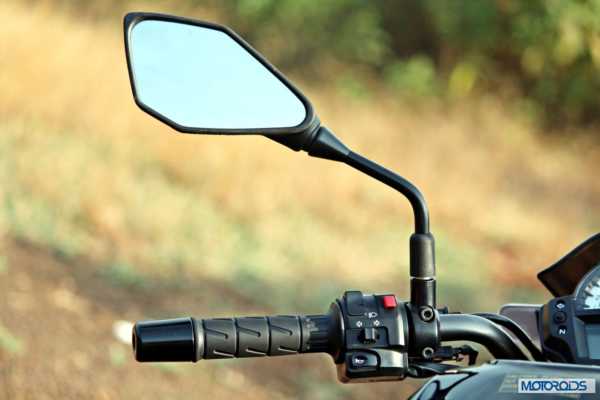 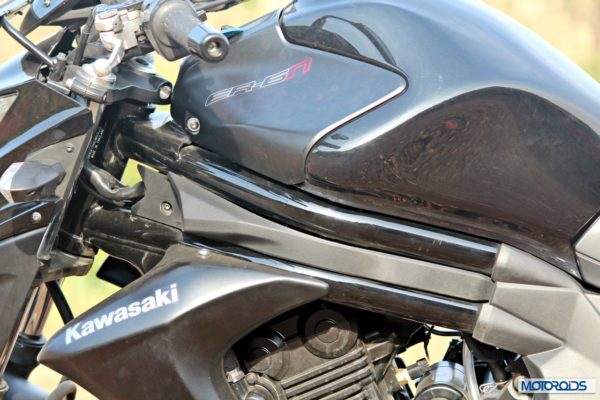 The 16 liter fuel tank from the Ninja 650 has been carried over, along with the tail section and other cycle parts. 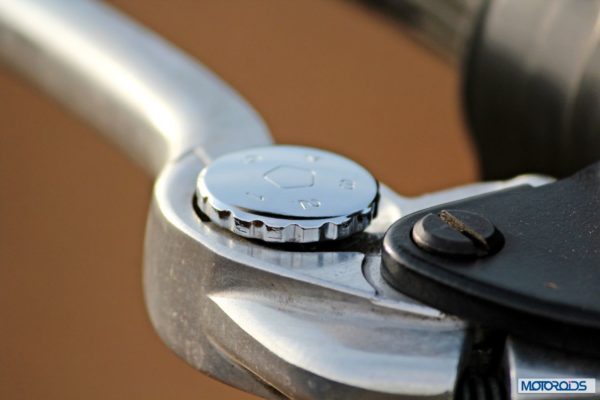 The ER 6n gets 5-way adjustable levers for reach. 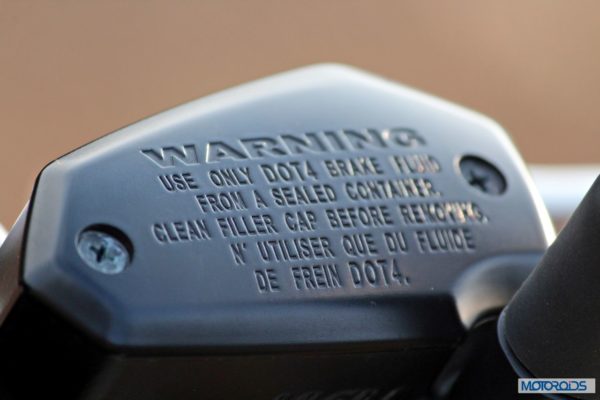 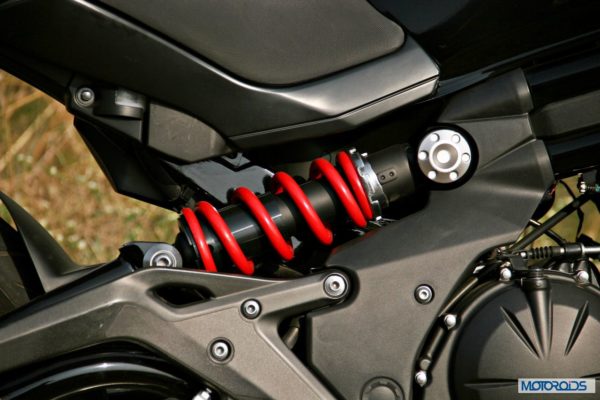 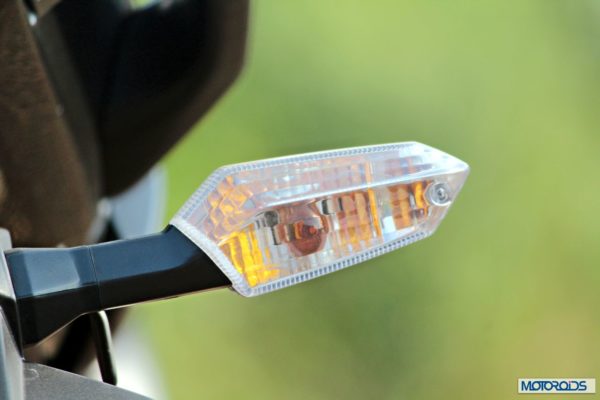 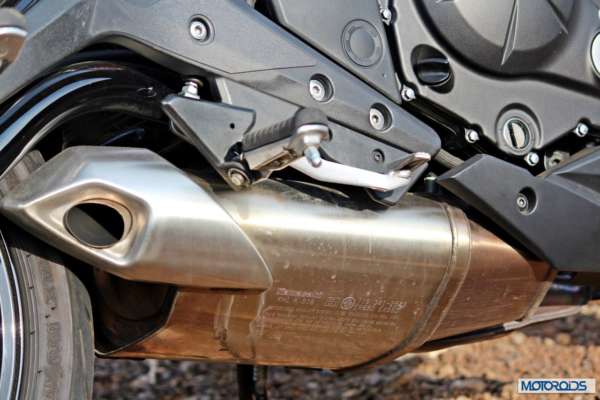 Neatly tucked away exhaust canister; one of the key elements that help centralize the ER-6n’s mass for improved dynamics. 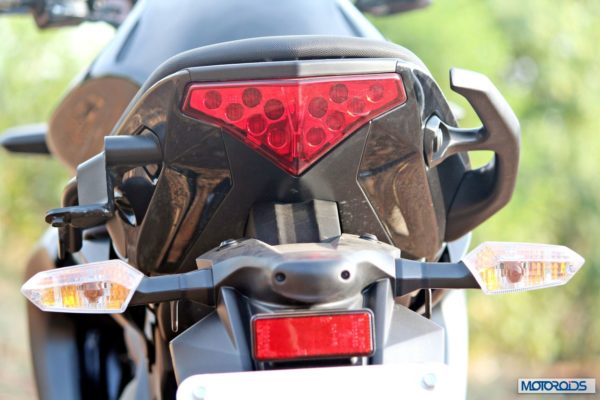 The ER 6n’s hind – a familiar sight for those accustomed to the 650. 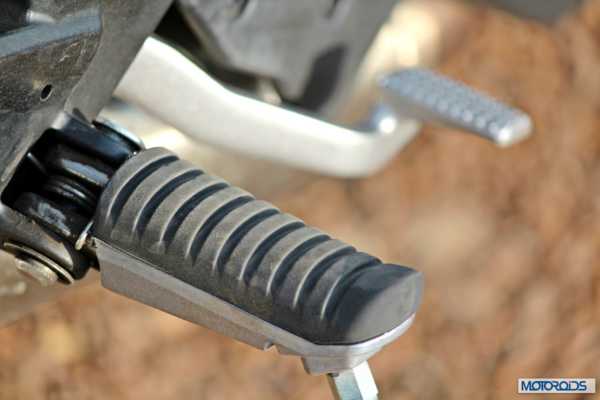 Rubberized foot pegs are aggressively positioned;  would have loved the metal ones though. 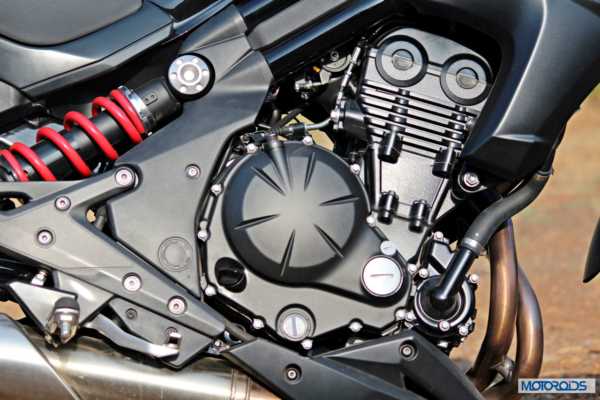 The liquid-cooled parallel twin from the 650 remains virtually unchanged.However it does gain revised fuel-injection settings and ECU. All of 649 cc, the liquid cooled, 4- stroke DOHC unit generates a maximum output of 71 bhp at 8,500 rpm and 64 Nm of torque at 6000 rpm. The engine’s power is controlled by a six speed transmission with wet, multi-disc clutch. 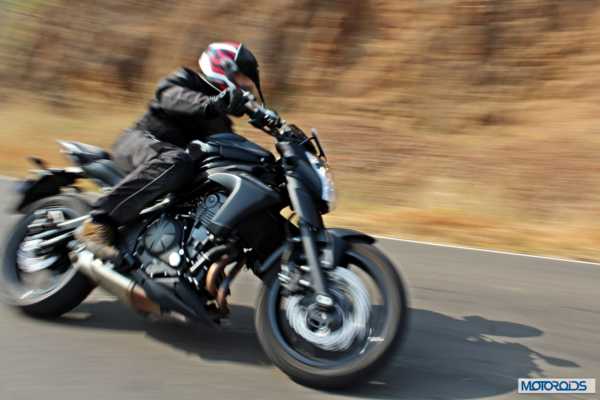 Give some twist and the ER 6n screams away, the parallel twin’s rising inferno making the digital speedo struggle. Make no mistake, it’s properly quick, and is the cause of plenty of laughs and smiles under the lid, but how is it different from the 650?

To put it numbers, the ER 6n does 0-100 km/hr in just about 4 seconds, while riding it with a deft right hand saw us average about 19 kilometers to the liter. 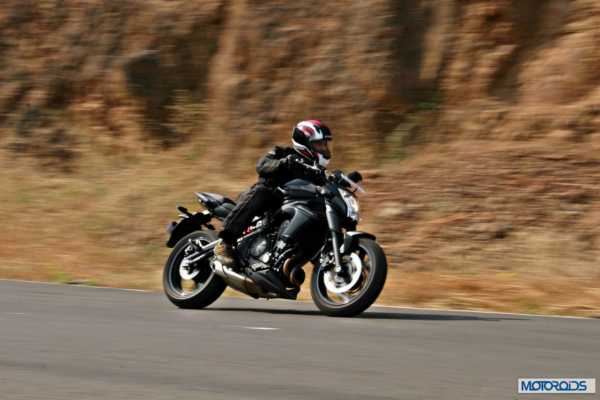 Cradling the parallel twin is a tubular frame which is essentially the same as the 650. Even the single sided, rear mono-shock is carried over. For Indian roads, the ER 6n’s ride is on the firmer side. The suspension can be softened up, but is unadjustable apart from preload on the shock. As a result, the ER 6n feels a little skittish over undulated and broken patches of a typical Indian state highway. 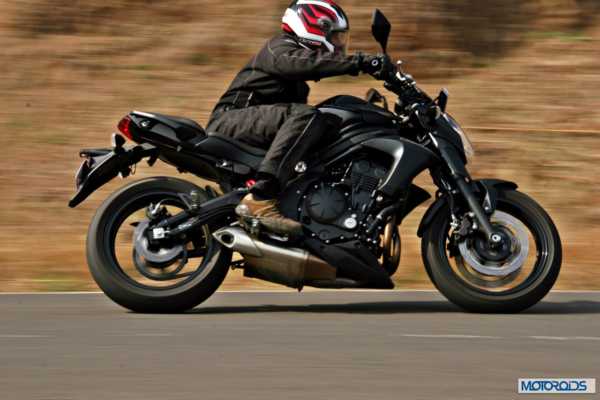 The capable chassis makes the handling safe, planted and predictable, but start pushing it and the bike loses some enthusiasm to relinquish those eager responses from the rider. Turn-in is great, and the punchy motor ensures lightning quick getaways from corners. 348.5 bhp per tonne helps things here. The ER 6n cuts through long, sweeping curves like hot knife through butter, but show it a tight hairpin bend, and it feels a little out of whack and unsettled, the slightly heavy front end coming to terms with the rest of the mass. That said, straight line stability is stellar. 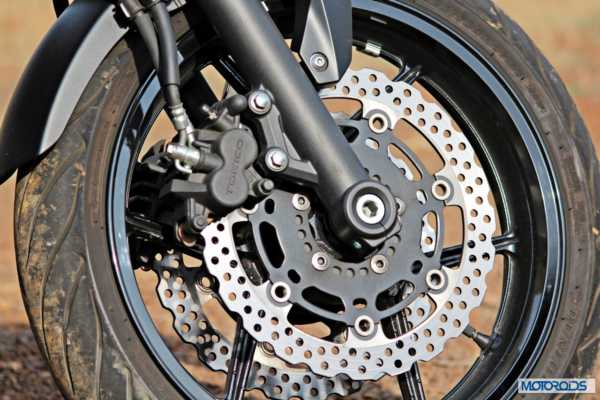 Braking is crisp and confidence inspiring, and is handled by dual 300mm petal-shaped disc brakes with twin-piston Tokico calipers up front, while at the rear a single 220mm petal-shaped hugged by a single piston caliper disc does duty. There is no dearth of braking power or feedback. However, ABS isn’t even an option, and the lack of which gave us some chills under hard braking. 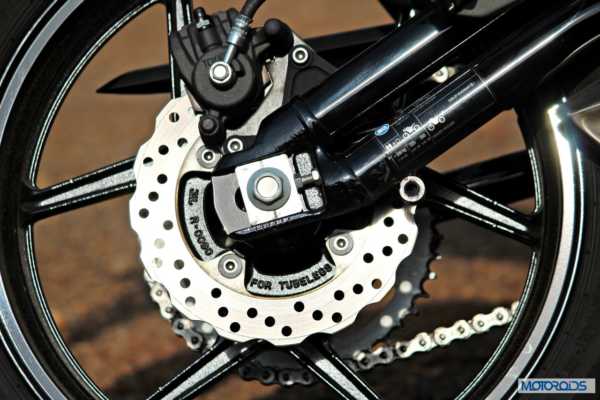 So is the ER-6n the perfect commuter for new or less experienced riders? Well it’s definitely one to consider, but it isn’t perfect. Straightaway it lacks that big-bike feel, which may or may not appeal to all of its targeted audience. Besides that, handling isn’t as nimble and engaging as we would have expected from this machine. The firm ride also makes the ER 6n a little nervous when speeding over Indian bumps and undulations, especially while leaned over. And as far as touring credentials go, it’s quite redundant, as the bikini fairing offers zero wind protection, and the seats are as firm as ever. As for the pillion, there’s a single sided grab rail, while the one for the other side comes as an optional fitment. 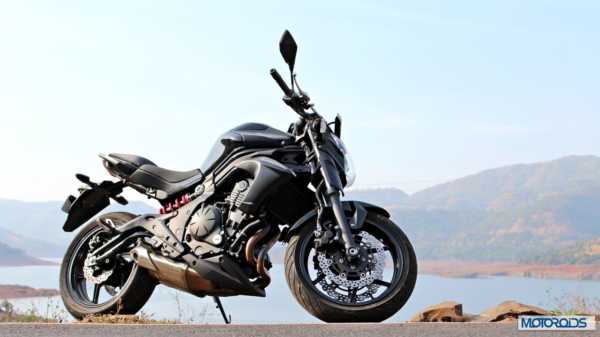 The fiesty engine gives it the punch, and at the same time offers a better spread of torque, courtesy of which one can travel all day long with the speedometer needle above 130km/h in sixth gear with the engine totally unstressed. But these are all Ninja attributes, which were already embedded in the ER 6n, which brings nothing new to the table as such. In the realm of performance motorcycling, the ER6n does make a point to justify its existence. But just as a street-fighter, not as the Ninja alternative. Unless you’re absolutely enamored by the naked looks and can’t resist the Rs. 4.78 lakh price tag, you’re better off with the 650. 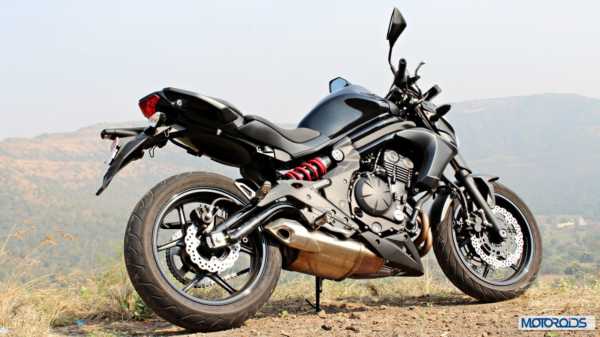