The new tenth generation Honda Civic is here. A performance enthusiasts’ darling when it was available in the country in its eighth generation, the Civic dwindled away owing to a lack of a diesel option. The nameplate wasn’t introduced here in its ninth generation but has been re-introduced now in its sportily shaped, Sportback-coupe like tenth generation design. The new Honda Civic looks the part to justify its sporty, performance-oriented legacy. But does it have the performance, practicality and features to take on the competition, which by the way is more intense than ever? We answer all your questions in a simple, straightforward and concise manner in this Q&A review.

What are the design and styling highlights of the new tenth generation Civic for India?

The new Civic looks very sporty and ready for action. It makes no bones about the fact that it isn’t an overly family and comfort-oriented car, but is targeted more towards the enthusiast. The car’s silhouette dons a sporty, coupe-like shape with an aggressively sloping roofline. One might mistake it for a notchback looking at that stubby tail section, but the Civic is actually a sedan. It’s longer and wider than the Corolla and Elantra, but shorter and narrower than the Octavia. It’s also the lowest car in its category in favour of that racy appearance.

The front end of the car gets the familiar, bold Honda grille in chrome, extending into those wide, expressive headlamps. The headlamps are all LED on the top variant, although lower variants will get a different projector-halogen setup. The shapely front bumper houses fog-lamps with big, sharp, chrome surrounds. The bonnet slopes forward to give the new Civic a dynamic appearance when looked upon from the front three quarters. On the sides, there’s a blinker positioned on both front fenders. The wheels are 17 inches with 215 section Yokohama rubber. The wide ORVMs are two tones with the lower part being black and finished in a ribbed surface with mounted blinkers. Besides the defining lines over the front fender, through the waistline and at the lower part of the doors, the side of the car is defined by a sloping roofline and a coupe-like shape.

At the rear, the boomerang-shaped tail-lamps are the biggest highlight. The entire tail cluster isn’t LED, with bulbs used for reverse light and blinkers. The outer ring, however, is LED and looks very nice when lit. There’s a chrome inlay below the rear bumper, and you also get parking sensors and a three-mode reverse parking camera.

It’s a bold looking car and comes across as the most sportily styled and ready-for-action as compared with the other options available within the segment.

What are the engine and transmission options on the new Civic for India?

What is the fuel efficiency of the new Honda Civic? 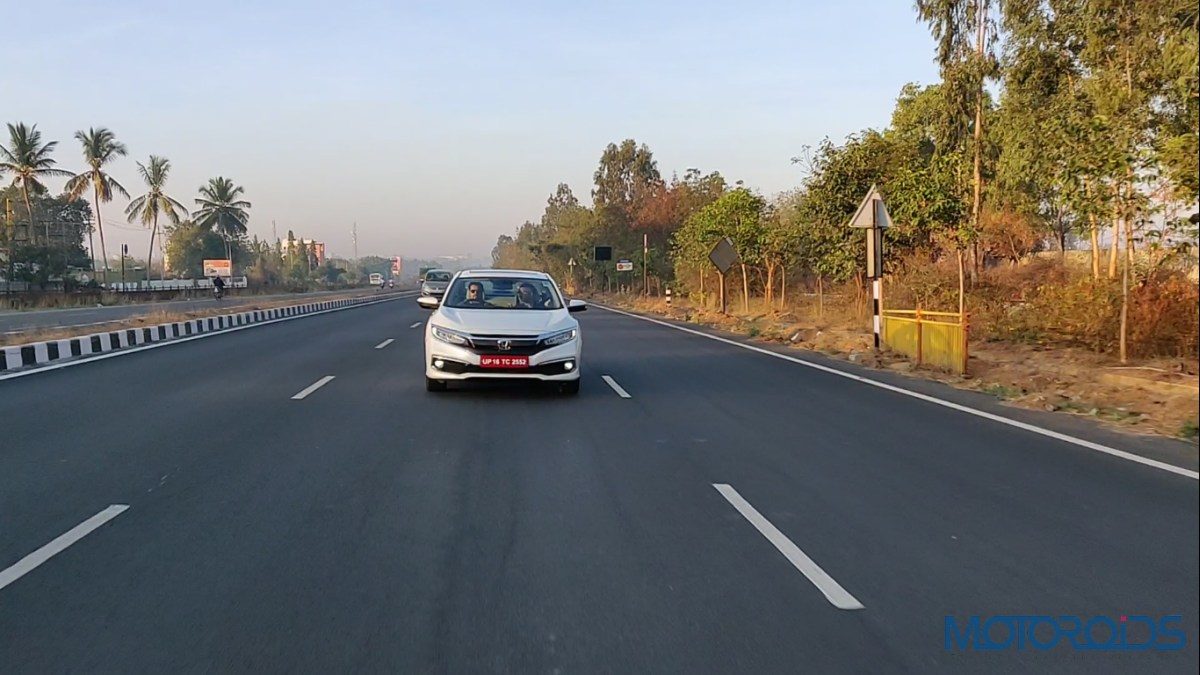 The ARAI fuel efficiency for the tenth generation Civic for India is rated at 16.5 kmpl for the petrol CVT and a class-leading 26.8 kmpl for the diesel manual version. In the real world, petrol CVT will offer 9-10 kmpl in the city and 12-13 kmpl on the highway. The diesel, on the other hand, is incredibly fuel efficient and offers 15-16 kmpl in the city and over 20 kmpl on the highway.

How does the new Civic perform, ride and handle?

The 1.8 i-VTEC is a free-spirited, free-revving engine, and revs all the way to 6800 rpm before the limiter cuts in. The steering feels fantastic to hold, and the driver position is spot on – just how it should be for a driver-focused car. The cabin wraps itself around you and the Civic feels ready for action right from the time to settle into that snug fitting driver’s seat. The steering is tilt and telescopically adjustable and the feel from the unit is also very direct, involving and precise. The suspension too rides brilliantly and strikes the right balance between ride comfort and offering reassuring poise around bends. All these things make the Civic a car which invites you behind the steering wheel. The CVT, however, is a downer here for the enthusiast, bringing down the fun-factor with its lazy shifts and rubber band effect. The known traits of CVTs prevent that fantastic engine from being enjoyed fully.

As you mash the pedal, the engine noise inside the cabin doesn’t correspond to the shove you get. The transmission responds far better to part throttle though, with clean shifts, no noise and smooth, fuss-free experience. With that brilliant, steering-chassis-suspension setup, the new Civic would have been a hoot for the enthusiast with a manual transmission. The CVT works well, but only if you prefer smoothness and comfort over outright performance. We did a little acceleration test with the Civic, and in the petrol CVT version, it did its 0-100 run in about 12 seconds.

The diesel engine, although not very hot on power, has a meaty torque output and feels quite linear for a diesel. It’s got a strong mid-range which makes it a nice motor to drive in the real world. There is some response to throttle from 1100 revs, with a mild sensation of the turbo spooling up being perceptible from 1500 revs. The forced induction is fully in effect by 2000 revs and that where you feel all that juicy torque allowing you to accelerate swiftly even in higher gears without having to shift down, making overtaking a breeze on the highways. The six-speed gearbox is also a joy to operate with its nice rounded knob, short throws and precise slot-ins. The diesel manual feels like a fab car to drive. Of the petrol and diesel variants, I’d any day pick the diesel manual, which can be an entertaining little machine for the kind of power and torque it has on offer. We really wish the petrol had a manual transmission too.

How’s the space inside the cabin of the new Honda Civic? 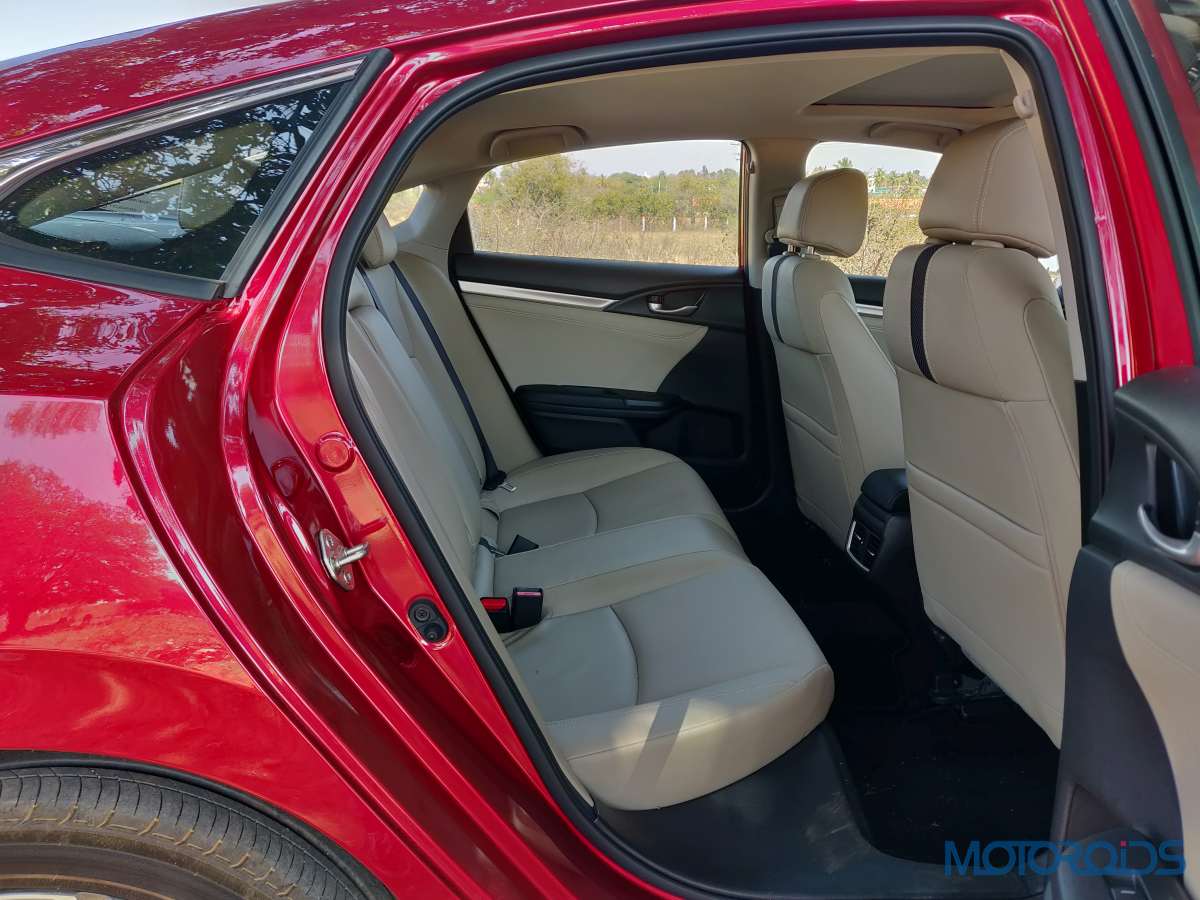 The front two seats are fabulous, with great lateral and under-thigh support. The headroom in the front row is also sufficient for even 6 foot plus drivers. Now while the Civic is a big car, the dash area feels compact and wraps itself around the driver.

At the rear, despite the sloping roofline, headroom isn’t as big an issue as we imagined it to be. Their sufficient headroom and people as tall as 6 feet should find their heads brushing with the roofline. Ingress and egress can be a bit of an issue owing to the sloping upper door shutline and very low seating which has liberated that space for the head at the rear. The seats are well cushioned, and offer good support, although the low height of the bench means that the taller occupants may find their knees pointing somewhat skywards. There is a central armrest, which is very softly cushioned and also gets two cup-holders. For two occupants, there is sufficient width, although if you wish to put in a third member there, the raised central surface and a very pronounced hump in the middle won’t make it suitable for more than short journeys.

The suspension has been set up very well, and except for the aforementioned issues, the seats at the rear feel quite plush. There’s also a small quarter window after the rear passengers’ window which does its bit to allow a tad bit more light inside the cabin.

How much boot space do you get inside the new Honda Civic for India?

The new Civic gets 430 litres of boot space. It’s not a very generous boot, and except for the Elantra which gets only 420 litres, the boot space in rivals in more generous. In fact, the Octavia offers an extremely cavernous 590 litres of storage space. Underneath the boot floor, you get a full-sized spare though, which is also an alloy, and not a steel rim.

What are the safety rating and features of the new Honda Civic?

The new Civic has received an ASEAN NCAP 5 star rating. It gets a reinforced structure, six airbags and comes with ABS, EBD, BA and Electronic Stability Program. The new Civic is quite a safe car to be driven in.

How many variants will the new Honda Civic get for India?

From what we have been told thus far, there will be at least two variants. The top variant will get goodies like all LED headlamps and 17-inch wheels. The lower variant, from what we are being told, will get a projector headlamp setup with halogens and smaller 16-inch alloys.

What are the features available on the new Civic

What are some of the missing features on the new Honda Civic for India?

When will the new Civic be launched?

The new Civic will be launched in early March 2019

What is the price of the new Civic?

The price has not been announced, although looking at the competition we expect the car to be priced between INR 17 Lakhs and INR 22 lakhs. We will reserve our verdict until the prices are announced.