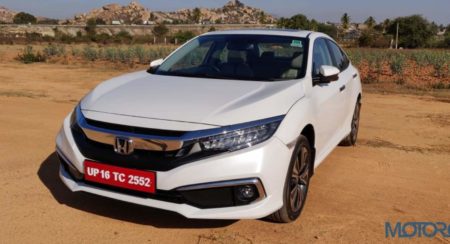 Honda has recently launched the tenth-gen Civic in India, at a starting price of Rs 17,69,000 (ex-showroom, Delhi). The Civic competes against the likes of the Hyundai Elantra, Skoda Octavia and the Corolla Altis.

The all-new, 10th generation Honda Civic is a modern and smart looking vehicle. The sedan is available in a total of 5 attractive colours - Radiant Red Metallic, Modern Steel Metallic, Lunar Silver Metallic, Golden Brown Metallic and Platinum White Pearl. The elements which make the new-gen Civic appear quite upmarket are a low-set and wide front section and the coupe-like rear. Complimenting all that are LED headlamps, sporty looking dual-tone alloy wheels, an electric sunroof, blacked-out B and C pillar with some chrome inserts around the body.

Upfront, the sedan gets Honda's signature chrome grille and aggressive looking illumination equipment along with LED fog lamps which is a first in its segment. The side profile flaunts some crisp creases and the coupe-like roofline blends well with the overall design of the car. Moreover, it gets electrically operated ORVMs with a lane watch camera which enhances the driver's visibility. Overall, the Civic draws its own unique identity in the segment by the virtue of its appearance.

The Honda Civic offers a sophisticated looking cabin on the inside. The sedan offers a spacious amount of cabin for effortless accommodation of 5-passengers at once. The Honda Civic's cabin features practical amount of storage spaces which includes a glovebox, glass holders, cup holders and 430-litres of massive boot space. Infotainment needs are taken care of by a touchscreen infotainment system which is compatible with Apple Car Play and Android Auto. The seats are quite comfortable and offer a good amount of side and under-thigh support. The driver can easily toggle through the infotainment system with the help of steering mounted controls. Quality of materials, the layout and design of things on the inside is top-notch and mirror the Civic's new-age external appearance.

The tenth-gen Honda Civic is built the car maker's ACE platform. The sedan scored 5-stars at ASEAN NCAP in occupant safety. It comes equipped with safety features like front and rear parking sensors, ABS with EBD, Hill start assist, Vehicle stability assist, Agile handling assist, and a multi-angle rearview camera. In terms of airbags, there are two up front, side airbags and curtain airbags which cocoon the occupants in the event of an impact.

Transmission duties are handled by a 6-speed manual gearbox for the oil burner and the diesel mill offers class-leading fuel economy of 26.8 Kmpl. On the other hand, the petrol unit returns 16.5 Kmpl of mileage. The Civic gets McPherson struts up front and an independent suspension at the rear. The ground clearance has been raised for India to tackle bad roads, and the Civic offers a ground clearance of 6 mm over the City. Both the engines are quite powerful to offer an enjoyable driving experience, however, we would've liked the petrol motor to be offered with a manual gearbox option too.