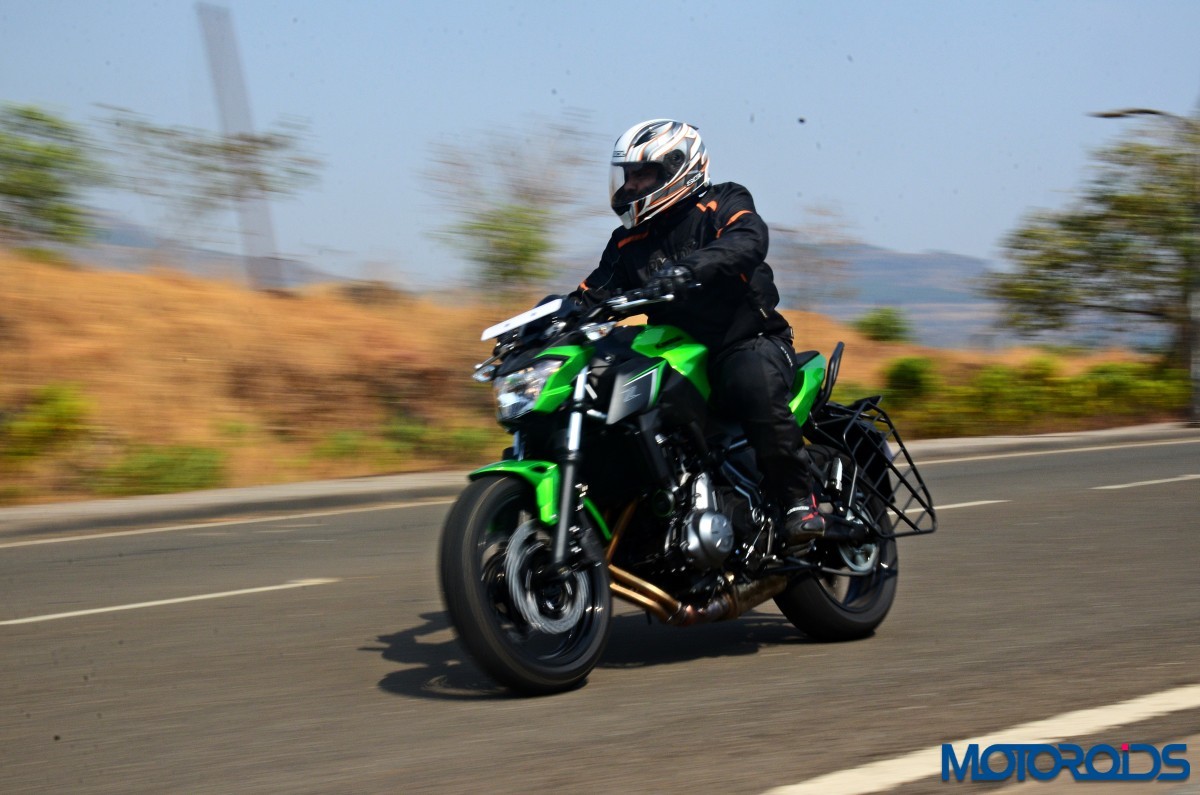 The new 2017 Kawasaki Z650 is essentially meant to fill the shoes of the ER-6n and compete against the modern day middleweight motorcycles. The Kawasaki ER-6n was appreciated by many but the rather subtle styling and the lack of ABS didn’t get everyone’s approval. Will the Z650 do the trick? We took a spin on the new middleweight roadster from Kawasaki to find out.

Similar to the ER-6n, the new Z650 borrows most of its hardware from the Ninja 650. It’s essentially a roadster variant of the middleweight tourer, without the fairing, a single-pod headlight and a flat single-piece handlebar. It gets the predator style look that is a trait to Kawasaki’s Z-brand family which makes the Z650 even more desirable than the relatively subtle looking ER-6n. Upfront is the sharply designed headlight with integrated DRLs. You wouldn’t get any fancy LEDs here. The illuminator is accompanied by a small windscreen which also holds the front numberplate. The headlight is surrounded by body-coloured mask. 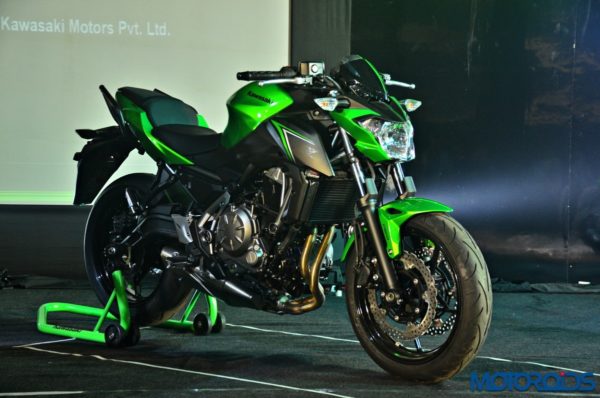 Following the headlight is a compact instrument console which is nothing like the one on the Ninja 650. The tachometer sits on the top of the console and at the centre of it is the gear position indicator. Right below the gear position indicator is the digital display which shows the speedometer, odometer, trip meters, fuel gauge, engine oil temperature and time. A gear shift indicator light can be spotted on the left of the digital console along with the engine malfunction notification light and left turn indicator. To the right of the display is a neutral gear indicator, ABS light and right turn indicator. The Mode and Set button sit on either side of the console. The instrument cluster sits on the flat, naked roadster style single-piece handlebar.

The rest of the bodywork is identical to the new 2017 Ninja 650. So you’d find the identical, muscular fuel tank with the primary keyhole mounted on it. The tank extensions add to the aesthetics and make the fuel tank look even more muscular. The capacity is identical too and the Z650 can store up to 15.14 litres of fuel. The split saddle, the new pillion grab rail and the massive saree guard are carried on from the Ninja 650, and so has the X-shaped LED tail light. The rear blinkers, number plate holder and the number plate illuminator occupy the rear fender while the tubular swingarm from the ER-6n has been thrown out of the window for a gull-arm unit. The asymmetrically mounted rear suspension too has been replaced by a new horizontal back-link, centrally positioned unit. It still continues to use an underbelly exhaust although, similar to the 2017 Ninja 650, the outlet position has been slightly tweaked. 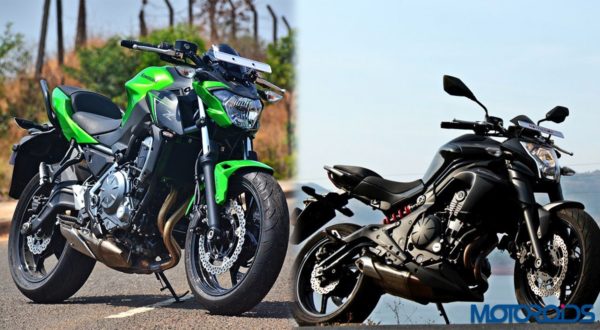 The new Z650, just like the Ninja 650, shares all the weight saving components including the new, lightweight twin-spar trellis frame and this one sheds a whopping 19 kilograms when compared to the ER-6n. The Z650 ticks all the right points to come across as one of the most appealing middleweights in the country today and, in my opinion, looks way better than the ER-6n. It’s got a sweet engine too.

The new 2017 Kawasaki Z650 draws 68PS of power @ 8000rpm and 65.7Nm of torque @ 6500 rotations from its 649cc parallel twin, liquid-cooled engine and comes mated to a six-speed transmission. Similar to the 2017 Ninja 650, the power has come down on this one when compared to the ER-6n’s 72.1PS but the torque has gone up from older generation’s 64Nm figure. So, in effect, this one features a better power-to-weight ratio than the ER-6n. The engine also gets a new assisted and slipper clutch for a lighter clutch and reduced wheel hop during aggressive downshifts. 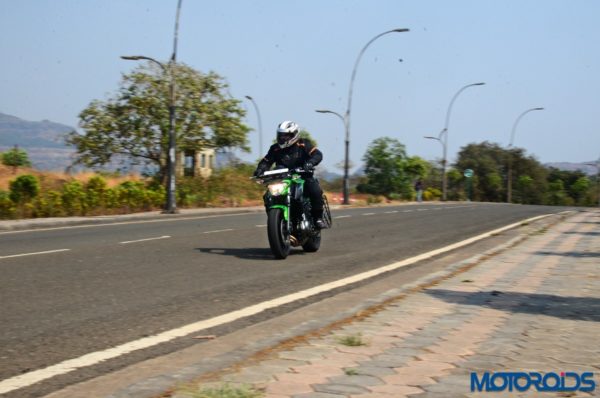 The engine is identical to the 2017 Ninja 650 and is tuned for better low and mid range power delivery for a relaxed ride experience. The engine also features new, slimmer intake and throttle body ports which are aimed to allow finer atomization of fuel and improved engine air-flow. It feels refined and comfortable anywhere north of 4000 rotations. The power delivery is linear too and it’d keep you engaged in city and on highways alike. The windblasts, however, can become an issue.

Anchoring duties are performed by Nissin sourced 300mm petal discs with two-piston callipers upfront and 220mm petal disc at the rear and the feedback is pretty solid. The motorcycle also gets Bosch 9.1M ABS which the ER-6n missed. Tyres sourced from Dunlop provide exceptional grip and we didn’t have any complains on the dry roads of Aamby Valley. 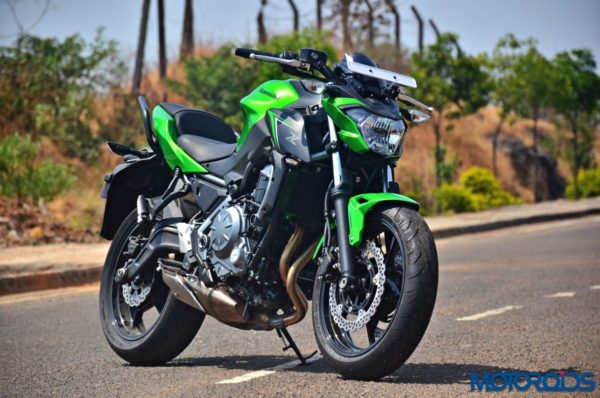 Our experience with the ride quality, ergonomics and handling department was mostly positive. The flat handlebar gives the typical naked roadster riding stance which will be a boon on city roads. It feels properly agile too but you can feel the lack of wind protection once the speedometer ventures into triple digit speeds. We’d hold our detailed comments about the ride and handling till we take the motorcycle out for a longer duration.

The new Z650 is everything we wanted the ER-6n to be and Kawasaki deserve a round of applause for the new roadster. It’s visually appealing, gets the benchmark Kawasaki build quality, features a potent engine and comes with ABS. If that isn’t appealing enough, Kawasaki has priced this middleweight roadster for just INR 5.19 lakh (ex-showroom). Do you really want any more reason to buy one?