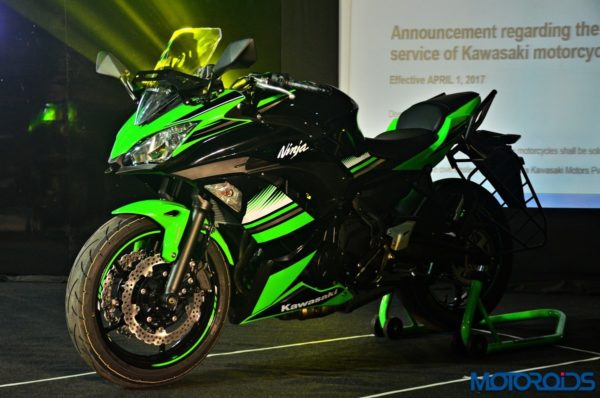 Visually, it’s an all new motorcycle. The design is sharper than the previous generation model with styling cues borrowed from the litre-class ZX-10R. So while the motorcycle continues to use a dual headlight upfront, the design of the illuminator is now beaky and sharp. On top of the newly designed headlights is the three-way adjustable windscreen. Following the new headlight is the all new fairing design which borrows styling cues from the current generation ZX-10R. The front blinkers continue to occupy the same spot on the fairing as before, giving the motorcycle a clean look upfront. Behind the new fairing is the clip-on style handlebar which replaces the flat, single-piece unit from the previous model. This has resulted in a slight change in the ergonomics. We’d get to that part later. 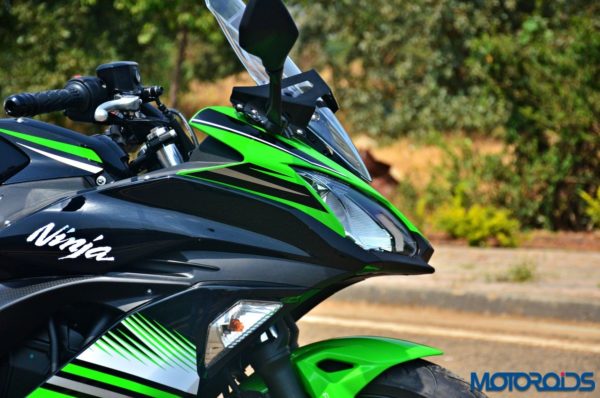 The instrument console has been redesigned too and this one looks a lot better than the previous model. This one features an analogue tachometer in the centre along with a digital gear position indicator, a gear shift indicator light and a digital clock. To the right, is a digital console which displays fuel gauge, engine oil temperature indicator, odometer, speedometer, trip meters, average range and an eco-riding indicator. To the left are all the tell-tale indicators along with the “Mode” and “Set” buttons. 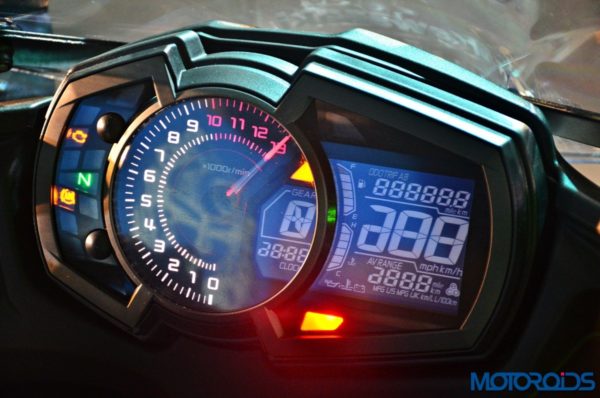 Following the new front is the redesigned fuel tank which features a muscular design with a flatter top and, in my opinion, appears much appealing than the previous model. The key hole also rests on the fuel tank. It is, however, marginally smaller than before (15.14 litres vs 15.89 litres on previous model) but that shouldn’t be much of a problem. We’d talk about that in a bit. 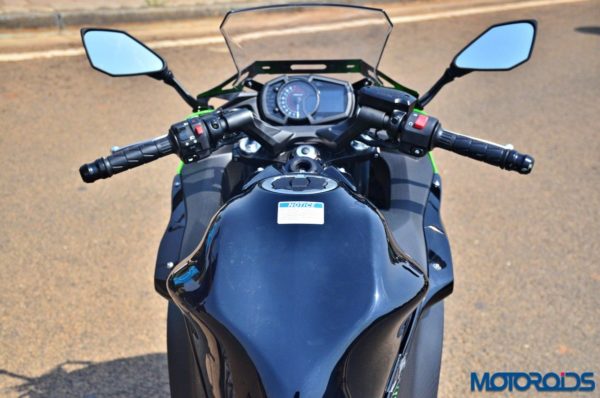 Behind the fuel tank is the new saddle which is 15mm lower than the previous model. So the folks who are vertically challenged can have better access to the ground than before. The pillion gets a new set of grab rails which do look a little out of place when compared to the neatly designed units that were seen on the previous model. But on the upside, you now get two grab-rails as standard. They’ve retained that massive saree-guard too which can double up as a barbeque grille (JK). 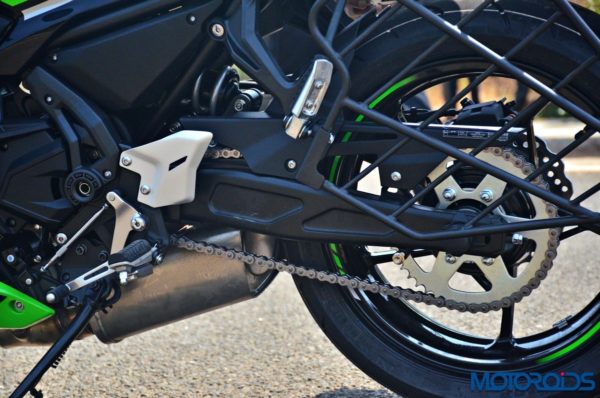 At the rear is a new X-shaped LED tail light which looks pretty attractive and sportier than the previous generation model. The rear blinkers, number plate holder and the number plate illuminator occupy the rear fender of the motorcycle. Down low, the tubular swingarm has been replaced by a gull-arm unit while the asymmetrically mounted rear suspension has been replaced by a new horizontal back-link, centrally positioned unit. It still continues to use an underbelly exhaust although the outlet position has been slightly tweaked.

Meet the motorcycle in detail: 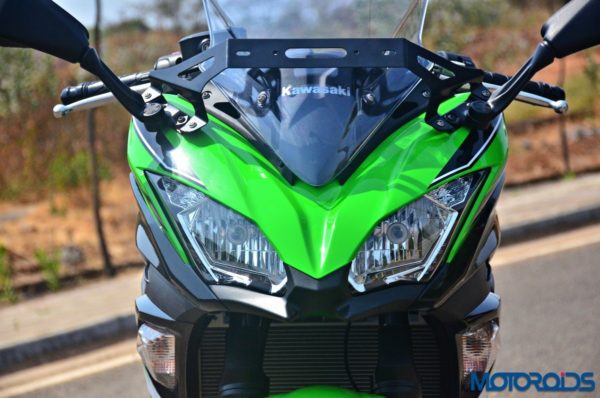 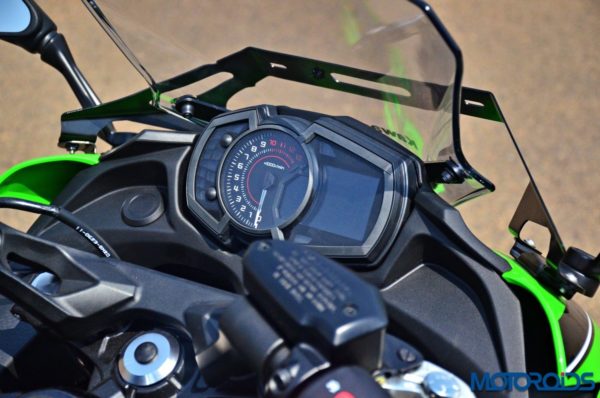 The new instrument console is a big step-up too 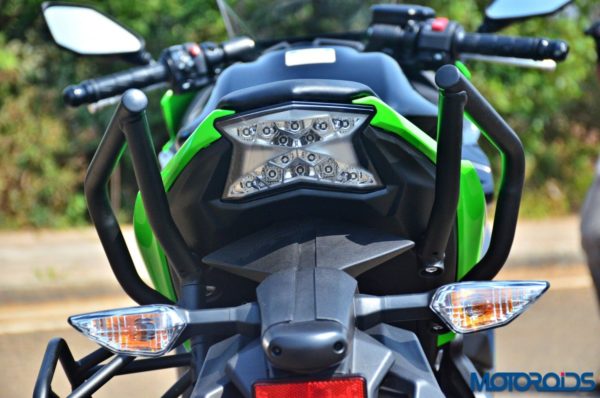 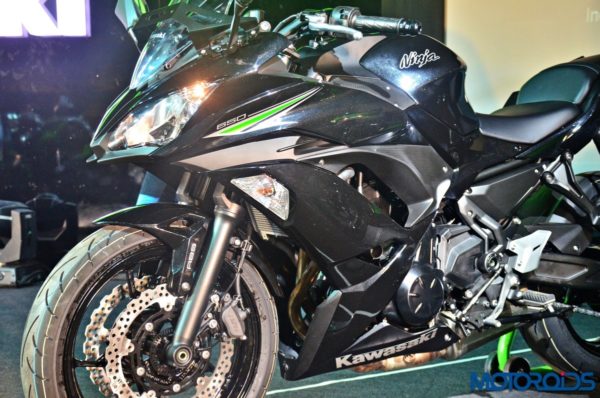 The fuel tank has been redesigned and it loses a marginal amount of storage. Not much of an issue though 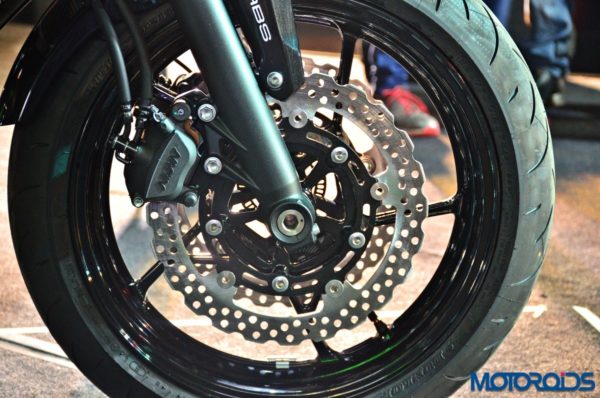 The brakes are far better than the previous generation model. The addition of ABS is a welcome move 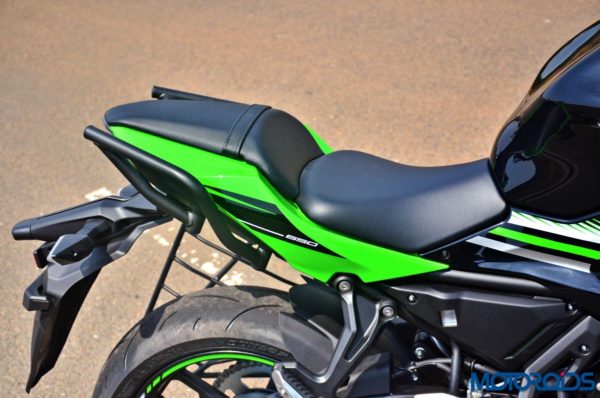 Overall, this motorcycle looks sharp, compact, and ready to go on a race track and yet it’s so comfortable that you can munch miles on the highway without feeling weary for quite a few miles. The motorcycle is built around a new twin-spar trellis frame which is claimed to be stronger and lighter than the previous model. The build quality is up to the mark and in our short stint with the motorcycle, we could not find any flaws. The new 2017 model sheds a little over 18 kilograms of weight which, in motoring terms, is a massive figure and that’s where it benefits despite a relatively tuned down power output. 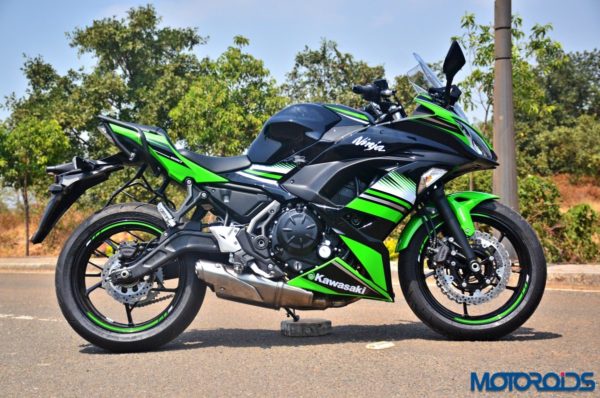 The new 2017 Kawasaki Ninja 650 features an updated 649cc parallel twin, liquid-cooled engine tuned to deliver 68PS of power @ 8000rpm and 65.7Nm of torque @ 6500 rotations and comes mated to a six-speed transmission. So while the power has come down from the previous model’s 72.1PS, the torque has gone up from older generation’s 64Nm figure. The motorcycle, as aforementioned, has shed 18 kilograms of weight which means that the new model gets an improved power-to-weight ratio. The engine also gets a new assisted and slipper clutch for a lighter clutch and reduced wheel hop during aggressive downshifts. The marginal loss on power and the reduced weight should result in slightly better fuel economy numbers and thus the minor reduction in the fuel tank capacity should not affect the range. 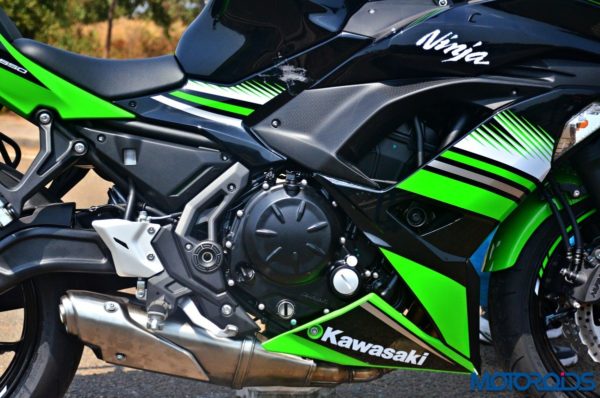 The engine is tuned for better low and mid range power delivery for a laid back ride experience. For 2017, the engine gets new, slimmer intake and throttle body ports which are aimed to allow finer atomization of fuel and improved engine air-flow. The motor shows some signs of discomfort below the 4,000 revs mark so you’d want to stay north of that for a pleasant ride experience. The power delivery, post 4,000 rotations is pretty linear. 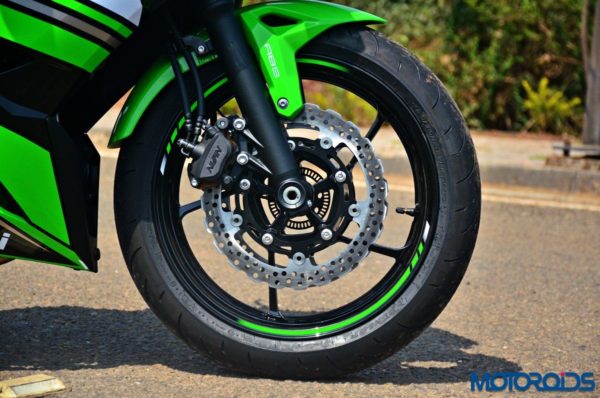 Anchoring duties are performed by Nissin sourced 300mm petal discs with two-piston callipers upfront and 220mm petal disc at the rear and the feedback is pretty solid. They’re remarkably responsive than the previous model. What’s even better for 2017 is the addition of Bosch 9.1M ABS unit to the middleweight tourer which was long due and you can now tap the brakes without worrying about locking up the wheels. The 120/70-17 and 160/60-17 rubbers from Dunlop grip the surface pretty solid too. 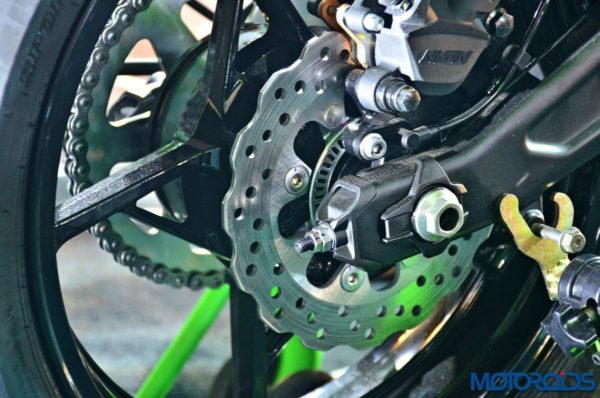 Our experience with the ride quality, ergonomics and handling department was mostly positive. The new clip-on style handlebar offer slightly front biased riding stance but it isn’t too aggressive to be an issue on long rides. It feels properly agile too and changing directions on the well laid tarmac of Aamby Valley required minimal input. It was a short ride and thus we’d hold our detailed comments about the ride and handling till we take the motorcycle out for a longer duration. 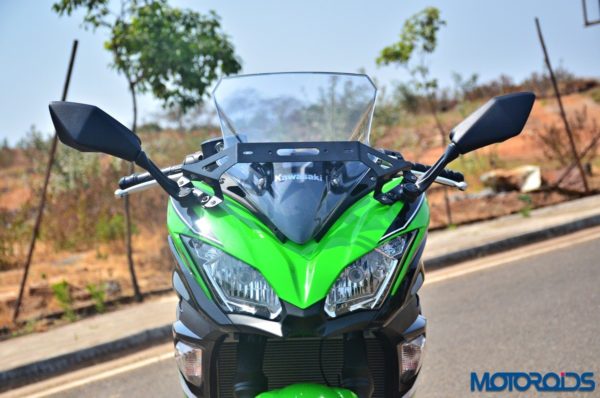 To sum it up, the 2017 Ninja 650 is a massive leap over the previous model and we’d give two big thumbs up to Kawasaki for the motorcycle. The new design, with ZX-10R inspired front look, the reduced weight, improved agility and a really potent engine makes the Ninja 650 a perfect package and the whole thing can be yours for INR 5.69 lakh (ex-showroom Delhi). Till we bring you an exhaustive review, let us know your views about the motorcycle and the first ride impression through the comments section below.