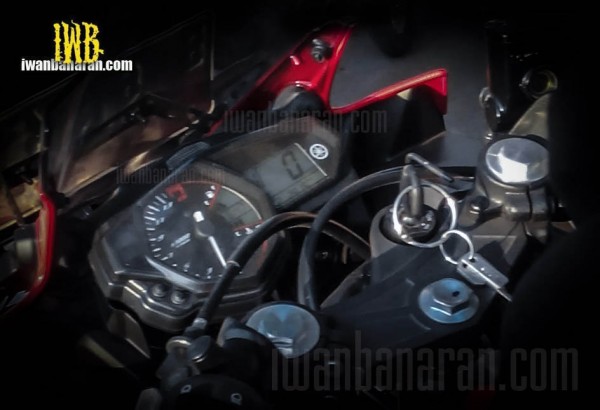 That the Yamaha YZF R25 release date falls on 20th this month is a knwon fact and another fact is that almost every bike aficionado in the country is having a hard time having to wait to find out what the upcoming Yammie would be like. Thanks to dozens of Yamaha YZF R25 Images that have flooded the internet, we already know about what the bike looks like. Adding to this burgeoning collection of YZF R25 images is this pic here, which reveals another exciting bit about the highly awaited motorcycle. As per this image, the redline for the YZF R25’s motor has been set at 14000 RPM, which further consolidates our belief that powering he upcoming model would be a 250cc, parallel twin engine. This engine is speculated to have a max power of around 35 bhp, which combined with a low kerb weight, should bestow the motorcycle with a very favorable power to weight ratio.

As we’ve been saying, the R25 will be positioned between the Yamaha  YZF R15 and the R6 in the bike maker’s product portfolio. In India, the R25 is likely to lock horns with the Kawasaki Ninja 300. It is expected that Yamaha YZF R25 launch in India will happen around the advent of next year, which means that the bike is still sometime away from us. The Indonesia launch of the R25 is expected to happen in a few months of time.