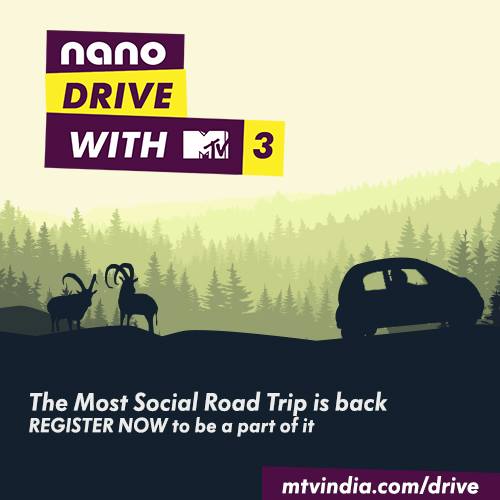 MTV is back with India’s Most Social Road Trip,Nano Drive with MTV Season 3. Nano Drive with MTV is India’s first ever social road trip which dwells exclusively online and engages audiences through social platforms to decide the course of the entire trip from the contestants to the destinations to the tasks that they will perform.

In this season of the show where the digital and the real world come together, the audience gets to decide not only the four teams that will compete against each other but also the unexplored destinations that they want the teams to visit. The four teams, once selected, will start their journey from specific points in the four zones, namely – Jaipur for North, Siliguri for East, Chennai for South and Goa for West.The teams will drive through their respective zones exploring unheard of locations for 21 days and will receive a shoestring budget to plan everything which pushes the teams to tap into their social media graphs for support.

Speaking about this, Ekalavya Bhattacharya, Digital Head – MTV India, said, “At MTV, innovation is what drives us. Our target audience keeps evolving and we have to do so too. Nano Drive with MTV is the perfect example of a cross platform, multiple screen, entertaining show. The previous 2 seasons have been fabulous and this season is set to be the most exciting one till date. We are the pioneers of branded entertainment content in India and such solutions is what differentiates us from the rest.”

Through the course of their journey, teams will be required to overcome obstacles, perform tasks and earn social media points via social media platforms like Facebook, Twitter, Instagram, Youtube, Vine and Pinterest. The entire journey will be showcased live on various social media platforms and on the Nano Drive with MTV website. Every activity on the road and on the web will add to the teams’ points and at the end of the journey, the team with maximum points will be declared winners of Nano Drive with MTV season 3 and win a Nano for each of its members.