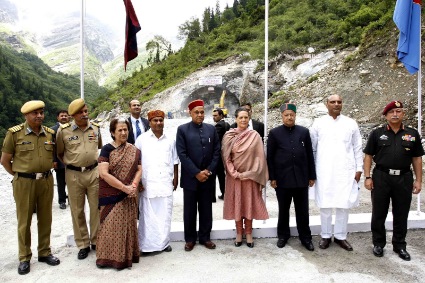 The foundation stone for the 9 Kms long Rohtang tunnel at over 13,000 feet was laid today by Congress President, Sonia Gandhi.
Once built, the Rohtang tunnel, will be the longest tunnel in India and is expected to reduce the distance between Manali and Keylong by over 60 Kms. The tunnel will ensure all weather road connectivity to Lahual and Spiti valleys which remain cut off from Manali during most of the year due to heavy snowfall on the Rohtang Pass.
The tunnel is divided into three parts – ventilation’s, highway and ergs tunnel and will done a horseshoe shaped cross section with a width of 11.25 meters providing sufficient room for two way traffic. CCTV cameras will also be installed for security reasons. Completion of the project is expected to be by 2015.
Digging the tunnel remains the most challenging task and this challenge has been handed over to an Austrian company, ‘Strabag and Afcons’. The concept of constructing the tunnel was envisaged in 1983 by Late Rajiv Gandhi and its construction received an impetus after the Kargil conflict. The Cabinet Committee on Security had cleared the Rohtang Tunnel Project in September 2009 with an investment of Rs. 14.3 billion and was finalized in consultation with the Geographical Survey of India and Manali- based Snow and Avalanche Studies Establishment (SASE).
Image Courtesy – DPR Defence
News
,
Comments
Leave a Reply Cancel reply