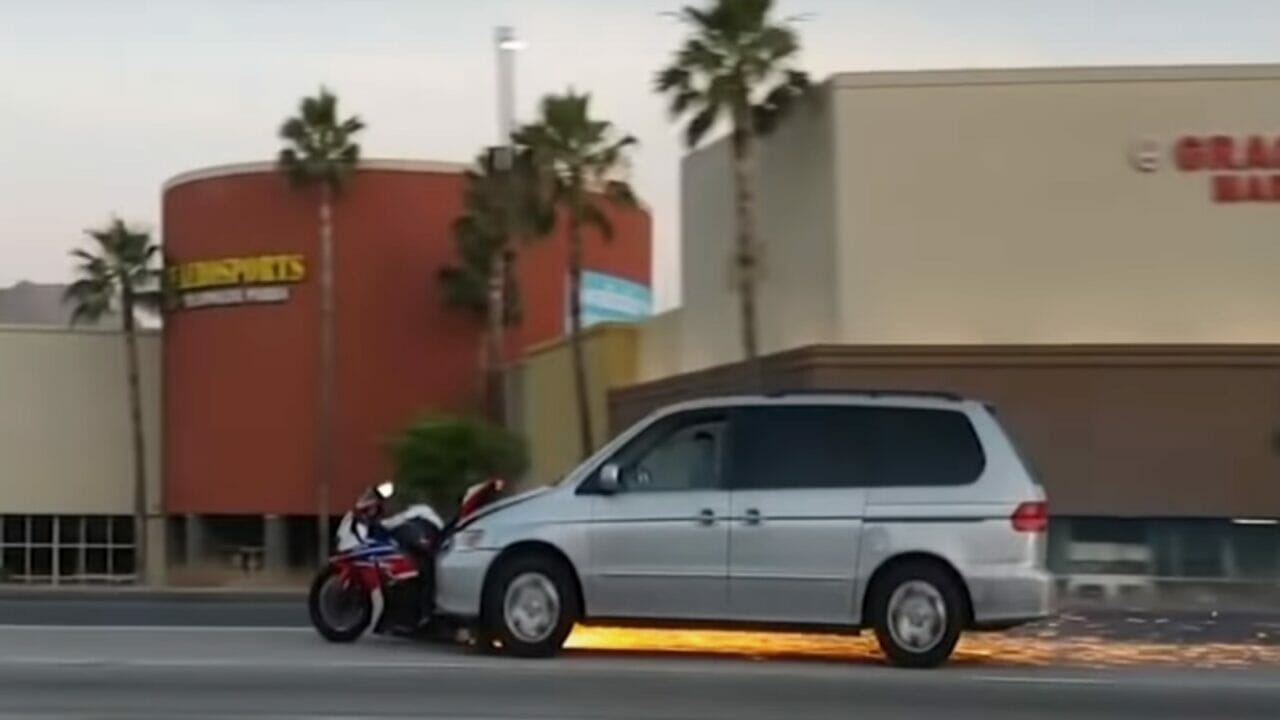 Some road crashes and accidents look straight out of action movie sequences. Cars and motorcycles ramming into each other, sparks flying in the air and in this case, a Motorvan dragging a motorcycle for some considerable distance. A hit and run driver was caught on camera, dragging a motorcycle still wedged in his front bumper. The onlookers must have thought at first that the whole scenario was scripted and a part of an action movie sequence but as it turns out, it wasn’t.

The incident took place in California on the Riverside freeway. The video was shot by Natalie Duran and Will Ross. They witnessed an MPV gunning ahead of them with sparks flying behind all over the road. At first, it seems like something fell off the minivan and it kept on dragging. As soon as the cameraman gets ahead of the car, that’s when they discover that there’s a Honda Sportsbike wedged into the front bumper of the car.

Fortunately, it was just the motorcycle minus the rider. The driver was in a hurry to exit the freeway. Later, both the van and the motorcycle were found abandoned off the highway. In the images which surfaced later, the Honda Sportsbike suffered heavy damage.

It was a hit and run case where cops did manage to nab 25-year old George Valentin who admitted to being the driver at the wheel. Looking at the whole turn of events, we were particularly worried about the rider. The motorcyclist was later revealed to be Chain Arunritthirot, who says he was travelling at around 65mph when he was struck by the car and was launched around 200ft from impact. Despite this, Arunritthirot says he isn’t seriously injured.

Chain might have gotten out of the whole scenario safe and sound but there’s no denying to the fact that driving on roads which such idiots on the loose is a risky affair. We urge our readers to always gear up for the slide rather than dressing up for the ride. Indian roads are infamous for claiming a lot of lives every year because of road accidents. One needs to be extra careful while driving on the roads.

A few days ago, a Taiwanese driver found out the hard way that why it’s a bad idea to be inattentive while your Tesla is in autopilot mode. His Tesla Model 3, while allegedly still being in the autopilot mode, rammed right into an overturned truck. It is a widely regarded fact that nothing can replace the driver’s instincts, even if you bring in a comprehensive set of electronics coupled with a horde of sensors, radars and cameras. A driver can make a decision based on his reflex and instinct which a self-driven machine won’t be able to in certain situations.