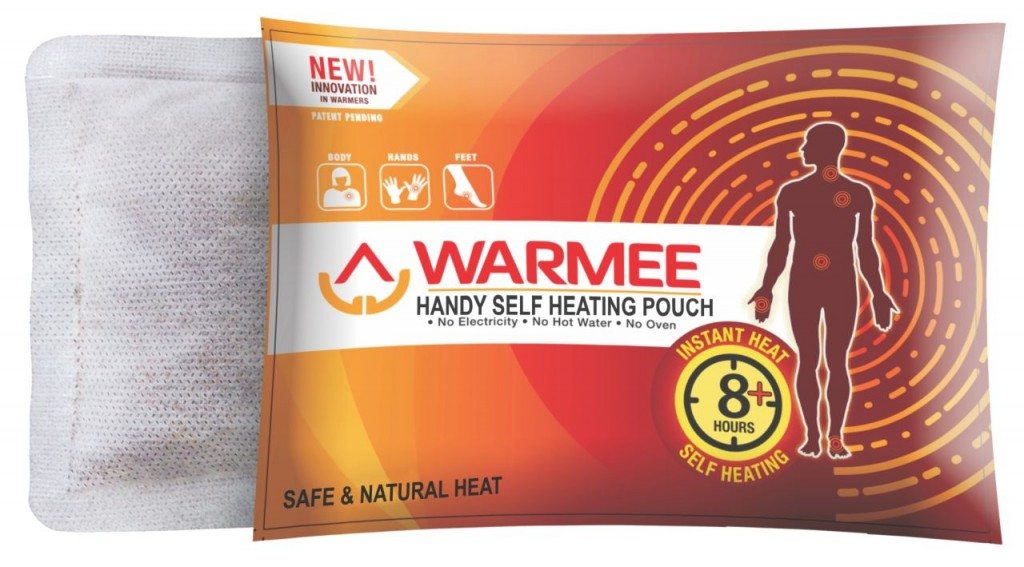 Traveling to cold regions requires a plethora of preparations which include carrying warm clothes and warming equipment to protect oneself from extreme climatic conditions. This, more often than not is a problem with bikers travelling to cold regions such as Leh and Ladakh, where keeping oneself warm while riding a motorcycle or camping out is a challenge. Warmee, a newly introduced product is an innovation which can help adventurers counter cold in a natural, handy and effective manner. The product comprises of a pouch (available in different sizes) which can be put inside the clothes one wears for a prolonged release of soothing heat.

A product of Pantheon Pharmchem, this self heating warmer does not require electricity, hot water or oven to put in use. All you have to do is tear open the packet and shake the bag for 5-10 seconds and you are good to go. The bag can then be placed inside the clothes, hand gloves, socks to protect oneself from cold weather. It takes about 15-25 minutes for Warmee, as mentioned on the packet, to attain optimum temperature, and is claimed to retain the heat for more than eight hours thereon. 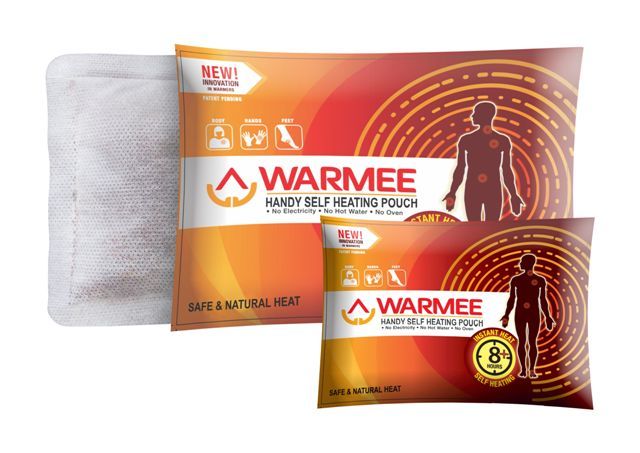 Warmee has been specifically formulated with non-toxic and non-combustible ingredients that almost all of us may have handled in some form in our everyday lives. The main ingredients are vermiculite iron, salt, water, activated carbon and moisture absorber. It is also claimed to have no side effects.

Warmee is a one-time-use product and cannot be used post eight hours of opening the packet which means that you have to carry quite a few bags with you, especially if you are planning a long journey. The handy pouch, in its smallest packaging weighs just around 80-100 grams and costs Rs 50 per piece.

It all sounds too good to be true, doesn’t it? While we haven’t tested the product ourselves to comment conclusively on its efficacy, the maker has shared the experience of some real-life users who tested the product in extreme conditions. Two avid cyclists from Bangalore, with two more of their crew members, traveled to some freezing regions of the Himalayas in February 2015 and here is what they had to say:

While winter in Ladakh can be intimidating to many adventurers just for the sheer cold, we wanted to take on the challenge by cycling in the cold desert. We had been to Ladakh for many different adventures but we had not come across anyone who had dared to venture into the remote valleys of Ladakh on a cycle in dead winter. 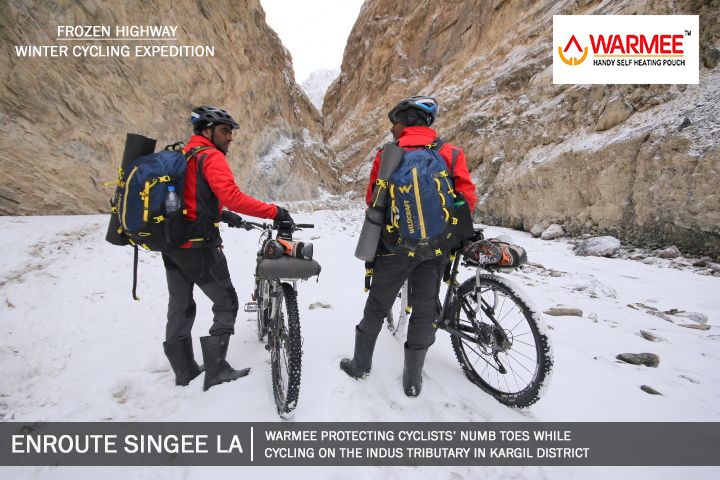 As thoughts converted into plans, we began to prepare ourselves for this crazy adventure. We started to accumulate the necessary gear for such a big undertaking which had to be done meticulously. When you are operating in extreme temperatures and high altitudes, precise planning and arranging logistics are very important. 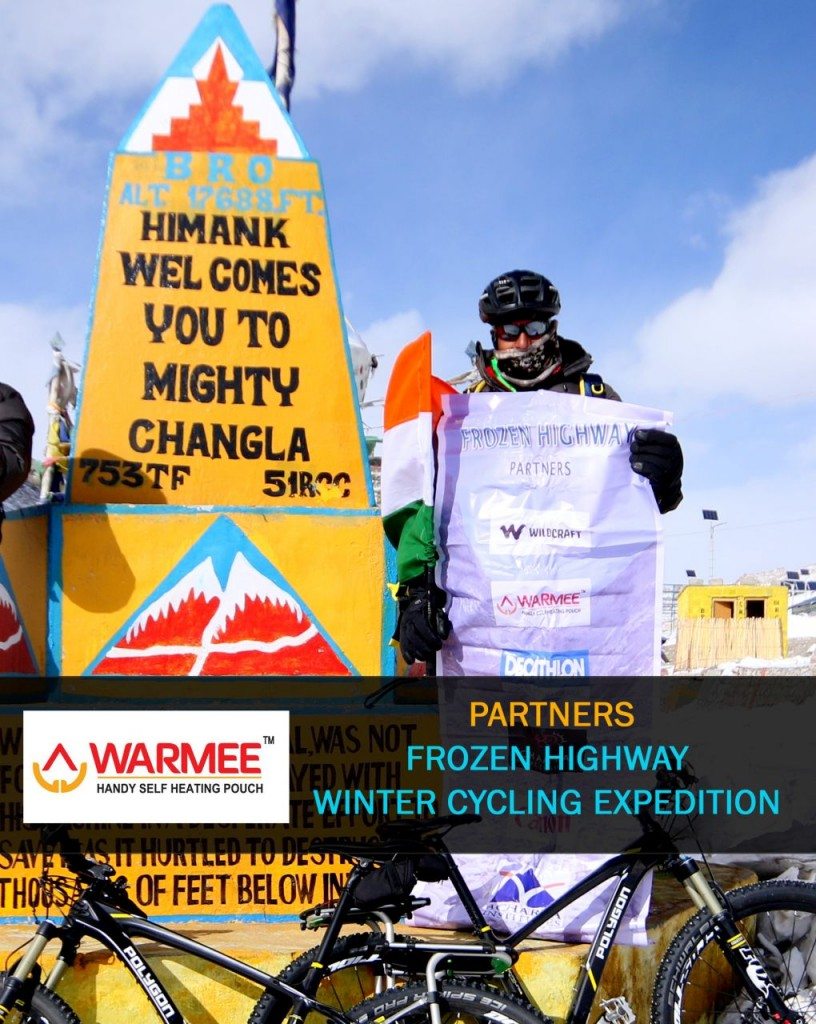 Of all the preparations, keeping our bodies warm for 36 days in freezing temperatures was the priority. As our team consisted of two cyclists and two documentary crew members, we needed enough insulation from the cold for us as well as our equipment. Jackets, gloves, shoes and each of the protections had to be carefully chosen to beat the cold but also aid mobility as we planned to cycle more than 600kms during the course of the expedition.

Though we had great equipment to protect our core body from the cold, there weren’t many things that could help our fingers and toes which would go numb due to intense weather. We had heard about products in the US which could act as self heating warmers to protect our hands and feet. While we explored more about such products, we came across Warmee, an Indian product which promised to do the job for us.

After elaborate planning and preparations, we finally landed in Leh, where the temperature was -18’C. 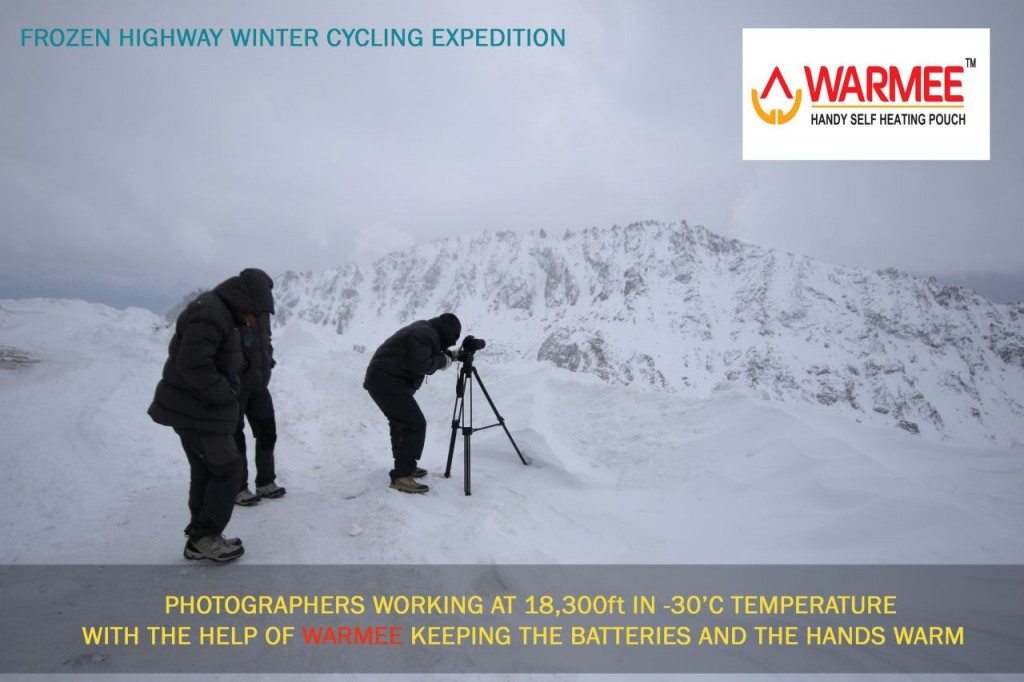 Since we had already experienced such temperatures, it was not that difficult to cope with. But we were unsure of how we would manage to cycle in the Changtang Plateau, the high passes of Kardhung la & Chang La where the temperatures would plummet. Both the cyclists and the photography crew had to spend the entire day in the outdoors braving the cold day in and day out.

The major challenge we faced was keeping the camera batteries charged especially during the night. Of course we still had to take care of our hands and toes which were most vulnerable to cold. Warmee not only helped us overcome these problems, it also gave us immense amount of confidence to push ourselves in extreme conditions as we made the first winter ascent on a cycle of Chang La and Kardhung La where the temperatures went down to -33’C.

Does the product sound promising to you? Have you ever felt the need of such a product on one of your trips to col regions? Do share your thoughts experiences with us.