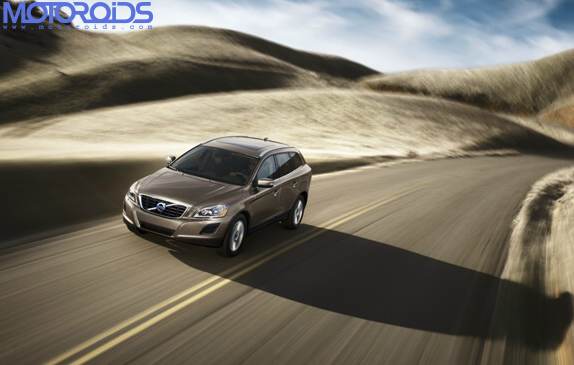 Volvo Auto will launch of its latest offering Volvo XC60 in today (probably), although the press release we got earlier said the date was 24th Nov. Volvo XC60 marks the Swedish company’s foray into the compact SUV market. The new car will be loaded with pioneering safety features such as Collision Warning and Laser and Camera Assisted Auto Brake system.

While no official statements have been made about the engine on the new car, the company’s Indian website shows 4 engine options to choose from – 2 diesels and 2 petrols. The first of the two diesel engine available is a 2.4-litre, five cylinder, (you heard it right, FIVE) turbo charged diesel engine producing 175bhp of power @ 4000rpm and 420Nm of torque at 1500-2750 rpm. There is a DRIVe version of the car available with the same engine that loses the 4×4 in favour of better fuel efficiency. The DRIVe version thus adopts front wheel drive unlike the AWD which is available throughout the rest of the range. The second diesel engine is the D5 turbo diesel producing 205bhp of power and 420Nm of torque. While the peak power is produced at the same rpm as the engine mentioned earlier, the peak torque is made at a wider band of 1500-3250rpm.

Both engines will be mated to a six speed Geartronic Auto transmission and a six-speed manual gearbox. The FWD DRIVe version is lighter, quicker and more fuel efficient than the AWD variant.
Apart from the diesel variants, the website also shows a 3.2-litre naturally aspirated petrol and a 3.0-litre turbo charged petrol. The power output of the two units is 238 and 285 bhp at 6200 and 5600rpm respectively. The torque for the NA engine is 320Nm while the boosted version dishes out a tasty 400Nm figure for its peak torque at a super wide 2500-4800 rpm band.
The XC60 comes loaded with innovative features and some really outstanding safety tech. We’ll keep you posted and update you as we get the official press release about the features and the prices