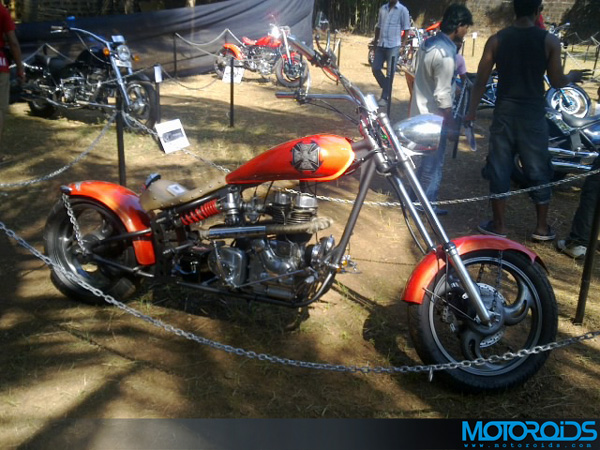 The last I told you was that I wanted to wake up at 7:00 am. Very honestly, I knew this was not going to be. I had not slept properly for the past three nights and trying to wake up early next day was just being too optimistic. The alarm was duly ‘cancelled’ as it rang for the first time, and I woke up at 9:00 am. Half an hour of putting the stuff back in the bag, getting rid of the Surmai fry and Pomphret curry I had last evening and I was on my way to Goa. Time of departure – 9:30 am.

I took a break at the first highway eatery I came across and had a heavy breakfast comprising two kanda pohas and one missal, followed by two cups of tea. Yes, two. I am not overweight without reason. By the time I got back on the bike it was 10:00 am. The first milestone I came across said – Panjim 320km. Quite some distance to go for a man with a broken back, I said to myself.

I planned my journey like this – I will travel non-stop at least for the next 100 km, after which I will take a short break to rest my butt. I will traverse another 100 km after this break, non-stop, after which I will take a long break where I will refill myself. After that I will stop only at the congregation point. Even the tenderest bums can last for a 50km non-stop ride, mine is not as tender, I know from experience. And anyway, it’s not your bum that needs to be strong for a long ride, it the thing between the two ears, as I had experienced only last evening.

20km on , I realised that I had forgotten to fill up. Bothered, I stopped immediately to take stock of the fuel situation. I had filled 13 litres before I started, and I could still see some fuel without having to shake the bike. Impressive, as I expected this thing to suck, quite literally. However, the bike had been performing very well thus far. It was running without missing a beat. The torque released at the rear wheel was quite impressive too, doing away with the need to shift any lower than the fourth cog even in uphill sections (except, around the tighter curves of course). The suspension didn’t do any good to my butt, and the vibrations too were a bit unnerving. But I managed to get used to it in a while, just like I did yesterday. It’s fun, this thing, in its own unique way. I quite liked my ride Chiplun on.
It’s quite a scenic ride, and the road surface is good too for the most part. You do get some really jarring surfaces on the way, but they are few and far between. It’s not such a good experience though when you suddenly come across a really screwed up surface after having been cruising happily at 100km/h. It takes some effort to slow this machine down on a short notice. If the behind could speak, it would have hurled some really filthy swear words at me on these sections.

Everything went according to the plan, thankfully. Except for a few idiots who were ready to part with their lives in a bid to turn me into dead meat and failed, the ride was rather eventless. I entered the Goa border at about 2:30, after which I lost massive time trying to figure my way to the Vagator Hilltop where the event is being organized.
I managed to reach the venue by 3:30, and the view from the top was spectacular to say the least. Hundreds of REs parked together, their chrome glittering in all its glory. Quite an gathering, with a multitude of characters walking around, some smug, some friendly, some  tall, some short, some drunk, some sane, some friendly – the passion and pride of being an RE rider was writ large on all the faces though. Every single guy who makes it to this place has a passion for biking, and it shows without you having to make the slightest effort to figure.

I parked my bike in the huge parking lot outside.  A 15 minute wait at the registration counter for someone who could handle media representatives, and I was in. The slow race event was going on as I entered. The mood was euphoric inside. I managed to bang into Akshay Varde, owner, Vardenchi Choppers, and a few other familiar faces as soon as I entered the venue. Quite a few foreigners too. There’s a tattoo shop, an adventure gear outlet, a Swiss knife (of something similar) outlet and a riding gear stall in here. Apart from this there’s this stall dedicated to booze and you’d get a Kingfisher pint at the cheapest price in the entire world. It’s so cheap that if I mention it here, you won’t probably mind spending the entire day tomorrow to ride down and have your fill on the last day.

Live music is playing as I type this. And the performers are playing rather well. The winner of the slow race championship have been announced, I will update the names in a bit. I am two pints down and looking at a way to put this text only, as I have forgotten my internet dongle in Mumbai. Yes I know I can be quite an idiot sometimes…..

*Vardenchi Customs from Mumbai has 6 of his choppers at the event.

*RE customs contest is up and has more than 10 entries.

*Beer selling at prices less then water at 10 bucks for a pint!

*One round of Live performance of 2 hours is over.

Crepe a delices serving the most unbelievable French crepe’s for 100 bucks
Vardenchi’s Vedic Chopper
Unbelievable bullet custom from Khalidaro design on display at RM customs contest, projector headlamps in the tank… You heard it right…. TANK!!

Here are the images for today.Detailed Texts to follow soon.

The morning breakfast for today (Not seen in the picture) included Misal and Pohe.
Trouble with the harnessing the bag to the seat.

Along with the half an hour wasted trying to fix the bag to the bike, A lot of time was lost trying to find the venue in Vagator.

Images from the venue :

It’s been a very long time since I last toured properly on a bike. My trips in the recent past have not been more than 100km, BOTH WAYS. A part of this situation may be attributed to the fact that Motoroids, as a new venture, doesn’t allow me much time to ride long distances for days at a stretch.

Secondly, for the past 2 years, my back has not been in a good shape and the doctor’s have strictly asked me to avoid riding long distances. So when Royal Enfield invited me to join their Rider Mania 2010, I was in quite a fix. There was definitely an urge to ride long distance and see whether I could endure the rigours of long distance riding anymore.

On one hand, there was this advice of the doctors to not indulge into any activities, which may be strenuous to my spine, on the other hand, there was this extremely overwhelming feeling of trying to somehow wriggle out of the clutches of sissyness. I was a bit afraid that I may have lost it completely and may not be able to tour long-distance ever. Thankfully this was not to be, as I realized after travelling 270km from Mumbai to Chiplun.

As goes without saying, am riding a Bullet, sorry… a Thunderbird (TBTS). This is no secret that I have never been a big fan of RE, I’ve always preferred nimble, high-revving Japanese bikes to these heavy, lazy, Indian favorite. The longest trip I’ve made on an RE in the past is 50km. I was therefore really looking forward to the experience.

There is loads I would like to share with you about the bike, but I would leave it for a later day, as I am dog tired by a long day’s work followed by a hard ride. Neglecting apprehensions from my wife and my mother-in-law, I set out, saying to myself that I would return if it became too painful. And painful it was, but only for the initial part of the journey. Once a biker, always a biker I guess…

I have ridden 275km and my back still feels to be in top nick. I guess I’d be doing this more often now. The bike ran smoothly for the entire distance, just that I saw a small puddle of oil under it, wherever I parked it. But that’s not something to worry about with the Bullet you know. The entire journey was completed in 4 hours and 15 minutes, which is not bad knowing that I was not very happy and comfortable with the machine.

Just had a bath, a surmai rava fry, a pomfret curry with rice and some golden fried prawns. Yummy! Time to crash now. Have to wake up at 7:00AM to resume the journey.

Motoroids are participating in this year’s Rider Mania. I’ll be representing Motoroids at this year’s event and will be riding down all the way to Goa to experience the madness first hand. The Event will take place from the 19th to the 21st of this month and as always, will be enormous fun. I’m off riding at around 1:00 this afternoon, and will keep you guys posted about the not just the event, but all the experiences that come my way, and of course the performance of the TBTS that i have as my steed for the ride…

Stay tuned for all the action…