Yesterday, we reported that the soon-to-be-launched Maruti Suzuki Celerio, which would replace the current gen Alto in most international markets, has received a four star rating in Latin NCAP crash tests. (CLICK HERE to read our this story) 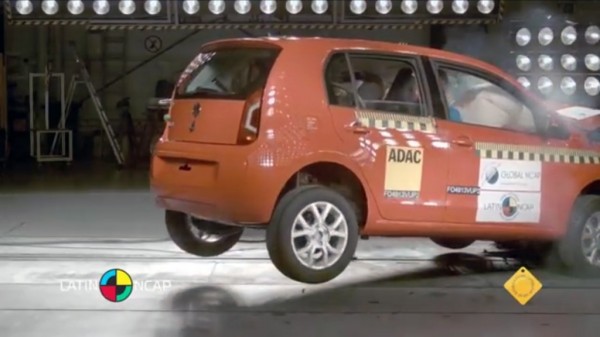 It has now emerged that Latin NCAP has awarded the Volkswagen Up! with a full five star rating in adult crash protection! For child safety, the Up! scores 4 stars. These crash test results from Latin NCAP hint that the upcoming car could become one of the safest small cars to go on sale in Brazil.

Unlike the all-glass hatch-door on the European model, the Brazil spec car gets a metal door. Also, the car gets roll-down mechanism for the rear windows (versus butterfly-type windows on Euro-spec car), a thicker C-Pillar and inclusion of trafficators on the side rear view mirrors.

In Brazil, the Volkswagen Up! will go on sale in the following variants – Take Up!, Move Up!, High Up!, White Up! and Black Up!. Out of these, Take-Up and Move-Up! will are three-door body variants.

Powering the Volkswagen Up! will be a 1.0 litre three-cylinder engine that can run on flex-fuel (petrol + ethanol). This engine will come mated to a 5 speed manual gearbox. Some of the variants will also be offered with an automatic transmission.

Stay tuned to Motoroids for more updates on the Volkswagen Up! hatchback