Volkswagen Motorsport India organized pre-season test for the Polo R Cup 2013 drivers at the Buddh International Circuit (BIC). 19 drivers participated in this test, 13 of which were rookies who got their first opportunity to experience the TSI powered racecar. Driver Coach Rayomand Banajee and Chief Race Engineer Ranjit Panmetsa were present at the pre-season testing to guide the racers and help them improve their pace through the day.

The pre-season test began with an in-depth briefing about the BIC and the rules and regulations to be followed while driving at a circuit. Driver Coach Rayomand Banajee started off the training lessons with  a classroom briefing before the drivers went out on the race track. After the theory, the drivers were divided into two groups and each one of them got 10 guided laps behind Rayomand in the first session. After both groups had their own set of 10 laps on the track, there was a common debrief based on their driving in the first session. This was followed by further instructions for driving in the second session of the day where the drivers put in independent laps, at their own pace. Once again, each driver got 10 laps in the second session of the day.

South African driver Jeffery Kruger, who was a guest driver in the Polo R Cup Round 6 of the previous season, managed to set the fastest lap of the day with a timing of 2:30.7 minutes.

“At Volkswagen Motorsport, we always believe in giving our drivers maximum exposure and training. Through the pre-season test them to understand their strengths and identify the areas they need to work upon to get faster”, said Prithviraj Siddappa, Head of Volkswagen Motorsport India. He further continued, “It is good to see that the drivers have improved from the first session and done better lap times in the second. This only shows how willing the drivers are to apply all the knowledge they gain from their driver coach.” 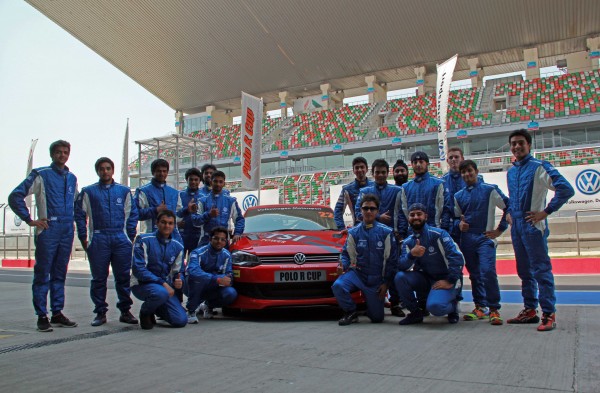