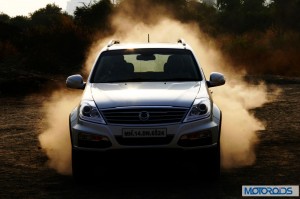 Mahindra group owned Korean car maker Ssangyong Motor has announced that it has sold a total of 12,607 vehicles in April 2013 – 5,115 vehicles in the South Korean market and 7,492 in exports, including CKD kits.

Ssangyong achieved its highest ever monthly sales since December 2006 and its result exceeded average monthly sales during January to March this year, when the company recorded the highest growth rate in the South Korean auto industry.

During January to March, 2013, it sold 31,265 vehicles (13,293 vehicles in the domestic market and 17,972 in exports including CKD, respectively).
Commenting on the results, Dr. Pawan Goenka, President, Automotive and Farm Equipment Sector said, “This performance shows that the turnaround of Ssangyong continues at a brisk pace. Our new and refreshed models are increasingly popular in the Korean and export markets.”

Ssangyong’s sales in South Korea have shown an upward trend for four consecutive months thanks to increased demand for the Korando series.

The company registered an increase of 24.7% in exports during April 2013, from a year earlier, exceeding 7,000 vehicles. This was due to a sales upswing in overseas markets such as Central and South America and increased sales of the Korando C to the Russian market despite the global recession.