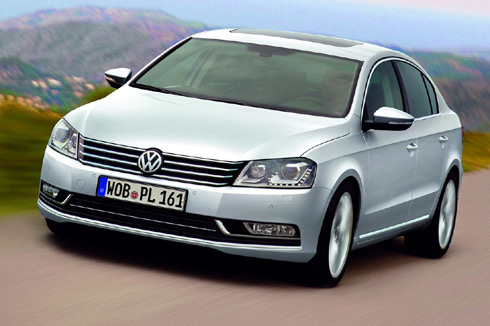 VW India has launched the latest version of its Passat sedan in India. The company unveiled the car in India at an event here in Mumbai. The new Passat will help VW garner some sales in the D-segment where the old Passat wasn’t quite managing to move off the shelf.

The new Passat is powered by a new 2.0-liter TDI BlueMotion diesel engine with power and torque rated at 170bhp and 350Nm. The BlueMotion technology has fuel efficiency as its USP and employs tactics such as tyres with lower tolling resistance, low friction mechanicals, lower idling speeds and atart-stop technology to attain better fuel efficiency. The car is available in three variants – tredline, Comfortline, and Highline (Automatic Transmission). The bookings for the car are open now, and the deliveries will begin in April. The price for the three variants is listed as under

Although VW has launched only the 2.0 TDI diesel engine as of now, the company may intorduce a 1.8-liter TSI petrol engine (samre as the Skoda Superb) at a later point.  As you would assume, the automatic transmission is the fabled VW DSG and should offer its now legendary wuick shifts. The car has witnessed quite a comprehensive makeover from the outside, but the interiors look very similar to the previous version. There is more chrome in the cabin now, and the quality of the materials appears to be better.