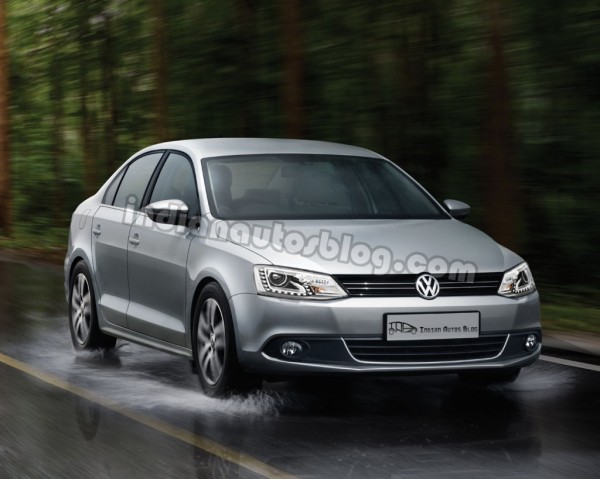 It has been more than a couple of years since the sixth gen VW Jetta has been on sale in India. While the car has managed to clock decent sales in the country and has definitely given a tough time to rivals such as the Chevrolet Cruze, the advent of the new 2013 Skoda Octavia has certainly worsen things a bit for its VW cousin.

Hence, it doesn’t come across as too big a surprise that Volkswagen is in the process of bestowing its sedan with a comprehensive facelift. It is being said that the Jetta refresh would get am updated headlight cluster, which would look much like the one on the larger Passat. Akin the Passat’s headlamps, the ones on the updated Jetta would have a L-shaped Daytime Running LEDs. The Trendline and Comfortline trim levels will also get a set of new design alloy wheels.

Other than the mild cosmetic changes, the car will also get a slightly richer features list-

Engine options are likely to remain unchanged and will boast of  a 1.4 litre petrol motor and a 2.0 litre oil burner. The petrol engine on offer is the same motor that is also available on the base variants of the newly launched Octy. For the Jetta though, this engine has a lower max power output of 122 PS and a lower peak torque of 200 Nm . The Jetta 1.4 petrol has a n ARAI certified Fuel Economy of 14.69 kmpl.

The 2.0 litre diesel engine that powers the Jetta Diesel has a max power of 140 PS and peak torque of 320 Nm. The transmission options for this engine will include a 6 speed DSG automatic and a 6-speed manual gearbox.

It would be interesting to see if these minor updates would enable the car to fend off the competition from the new Octavia.

Stay tuned to Motoroids for more details on the upcoming Volkswagen Jetta facelift.