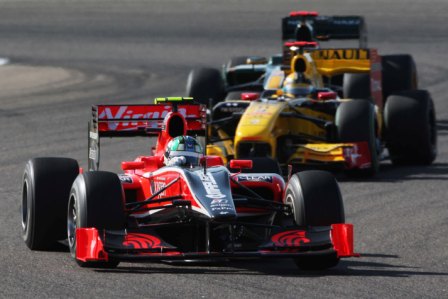 Virgin Racing will be looking to clear a mental roadblock by crossing the finish line and taking the chequered flag for the first time this Sunday at the Malaysian Grand Prix.

However, that being the goal it will be much easier said than done with all the problems that the Virgin Racing team seem to have at the moment. Their biggest worry is that the fuel tank seems to be 13 litres short of what is required to finish races.

It seems that their car would not be able to complete the Malaysian and Chinese Grand Prix’s at full speed. They have requested the FIA for permission to submit a new chassis for inspection although that will not be ready until the fifth race of the season that being the Spanish Grand Prix.

Virgin also have other worries. The car also seems to be suffering from a fuel pick-up problem which means that they carry more fuel in qualifying than the other cars making it difficult to secure a good qualifying position. Add to all this their hydraulic problems which have haunted them since the start of the season and one can certainly see that Virgin’s woes are not about to end just yet.

It seems to be a long road ahead for the Virgin Racing team but for the sake of the team and the drivers. One hopes that they can pull the cat out of the bag at Sepang this weekend and somehow manage to complete the race. If they did manage to complete the race, that in it self would be a huge morale boost for the team that has had constant issues with their car in its debut season.

A promising looking season has withered out and the hopes that many had for this young team seem to be dwindling. However, all is not lost and if these changes are made as quickly as possible one may soon see a competitive Virgin Racing team taking the chequered flag soon.

As for Sepang the circuit is usually an exciting one loaded with many tricks. For starters, the weather is unpredictable with sun shining brightly at one moment and the cars in the middle of a tropical storm the next. It looks to be an exciting race although the new teams would do well to use extreme caution on the tracks and while planning their strategy as well.