Home News WilliamsF1 Have A Steady Start To F1 2010 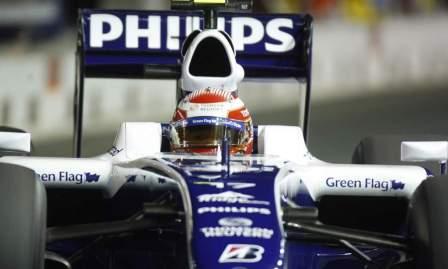 The racing weekend at Melbourne, Australia was full topsy-turvy till the very end. Robert Kubica finished second for Renault, while Alonso successfully fended off strong challenge for 4th position by Lewis Hamilton with some help from Mark Webber. 09 Champion Button came out tops, and his gamble for slicks in the early stages of race proved to be vital. Continuing their progress, Force India seems set to become a mid-order team rather than the back-markers.

Australia was a challenge for Williams as well. The season’s second race meant it was too early to say who held the advantage & who didn’t. But Rubens Barrichello has been showing why he is still one of the best in the business. Out pacing his team-mate Nico Hulkenberg with quite a margin both in race & qualifying he has shown how to extract the most out of the Williams’ package. He qualified at 8th spot drove a steady race and finished eighth as well. While everyone in the pack was moving up & down in a weekend hit by light rain, the Brazilian kept his nerves.

Nico Hulkenberg had a disappointing weekend. Nico qualified a poor 15th and had no better outing on Sunday. He got caught up in the melee in the very first lap which took out Sebastian Beumi of Toro Rosso & Kobayashi of BMW Sauber along with Nico. Nico needs to learn a lot from his team-mate & senior Rubens and improve on his qualifying pace. Rubens has to show he isn’t just a good driver, he is also good motivator & can lead from the front when given the chance.

Williams has found itself in a position where it is the lead manufacturer for their engine supplier Cosworth. While all the other teams with Cosworth engines are new, Williams has lack of useful data to improve their package vis-à-vis their engines. Still Williams, with help from Barichello are showing why they are one of the best in the business. Their race pace & qualifying pace, although not amongst the best, is consistent and that in itself is a big achievement considering Cosworth hasn’t had a F1 race in years. With very small budgets unlike Ferraris or Mercedes, Sir Frank Williams has shown once again how to run a team in one of the most efficient ways.