Home Hyundai VIDEO: Walkaround Video of the All New Santro with All Its Details

This tiny little hatchback has managed to create as much of a buzz as a rare performance oriented car, the humble Santro has to be one of the most exciting launches this year and thanks to the power of the internet, we see a walkaround video of the hatchback uploaded by YouTube user, Riderboy 46. The car is seen unloaded from a truck to a storage facility of a Hyundai dealership in the southern part of India. The lower part of the exterior was covered up with some material, probably to keep the paint safe during the transportation of the vehicle. 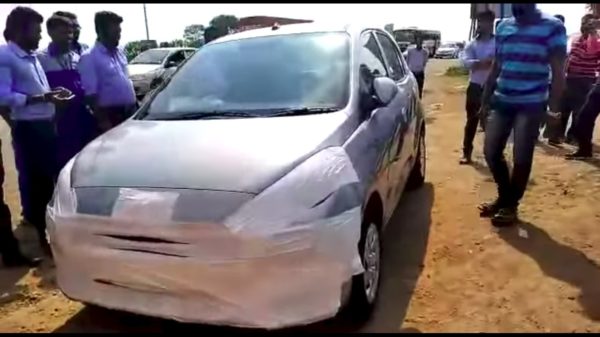 Once the car gets unloaded, the cameraman climbs inside showcasing the glovebox of the car, which looks big enough and there also is a neat storage space above the glovebox where you could place your phone, wallet or similar sized stuff. The cabin feels nice and airy with a dual tone black and beige colour scheme, which has been carried forward on the steering wheel as well. The Hyundai logo on the steering wheel is blacked out and the gear knob is in a familiar position on the dash, pretty much as we see on the Grand i10. The window switches are place below the gear knob instead of their normal position on the door panels.

Also Read: Spied: Hyundai Santro Interior Ahead of Its Launch

The car in this video is the top end variant which gets dual airbags apart from the standard ABS with EBD, pair it with Hyundai’s strong body shell and this car has the potential to offer great protection in case of a mishap. The rear seat is flat, and there is no transmission tunnel in the middle which means the car could seat three people in the rear without much trouble. the rear passengers also get an AC vent which gets a beige surround and a flow control dial. Here is the video for you to watch.