Home Hyundai Spied: Hyundai Santro Interior Ahead of Its Launch

The Hyundai Santro has been one of the most awaited cars this year in the Indian market, while it was unveiled to the media a couple of days ago, we were not allowed to take pictures of the car. However, some car enthusiasts thought it was not right and now we have some really nice, undisguised images of the car in what appears to be a parking lot, where many Santros are waiting for their new owners. The spy shots reveal the side profile of the car, the instrument console, the touchscreen infotainment system and the dash of the little hatchback. 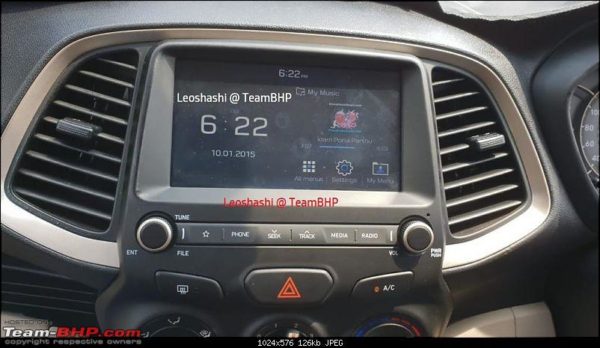 As we mentioned before, the design of the interior is easily recognisable to be that of a Hyundai. The dashboard gets a dual tone finish of black and beige, which is carried forward on the steering wheel as well which gets buttons for the infotainment system. The lighter shade of beige would add a sense of space in the cabin and also appeal to the customers, the infotainment screen offers a nice resolution and is similar to what we see in other Hyundai models. The instrument console has a quite basic design with two circular dials for the tachometer and speedometer with a small MID screen on the right of it. 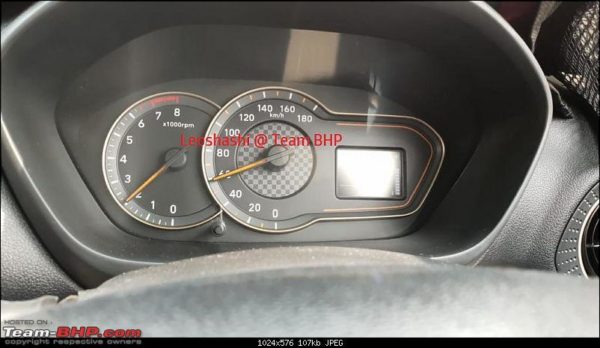 Powering the Santro is a 1.1-litre four-cylinder petrol engine which generates 69 bhp and 99 Nm of torque and comes with an option of either a five-speed manual transmission or a five-speed AMT. A factory fitted CNG variant will also be on offer which takes the power down to 59 bhp and 84 Nm of torque and will be offered only with the manual transmission. The car boasts to have a safe and robust body shell and ABS with EBD and a driver side airbag will be offered as standard across all trims of the car. The bookings of the Santro are now open online and the prices and the car would be formally unveiled on the 23rd of this month.