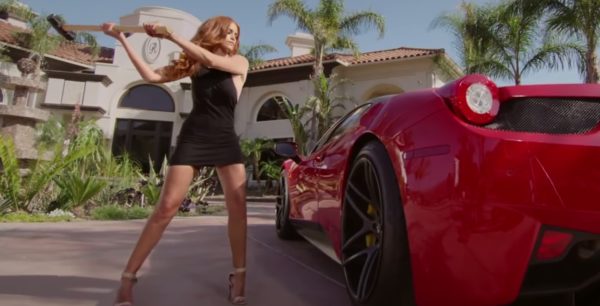 For all you people who think themselves as Casanova who can get away with anything, here is a video that might give you sleepless nights. Think of an incident when your most prized possession was damaged by someone intentionally or accidentally. Now multiply that experience by 10 and you will come close to what this Ferrari owner would have felt when his supermodel girlfriend wrecked up his superhot 458.

Although this is just an advertisement of Forgiato wheels called “Unbreakable”, it might give your better halves an idea of what to do if they find you with someone else. The advertisement begins as the supermodel walks into her boyfriend’s house only to find him with another woman in the bed. But instead of creating a scene inside the house, she decides to bring her wrath on the smoking hot red Ferrari 458 parked outside the house using a sledgehammer. After smashing the bonnet, windshield and window glass of the Italian masterpiece, she hits the wheel. Surprisingly, even the sledgehammer could not put a single scratch or dent on the wheel.

What do you think of the advertisement? Share your thoughts and opinions with us through comments below. Stay tuned to Motoroids for more updates from motoring industry.