The Husqvarna Svartpilen 401 and Vitpilen 401 have already landed on Indian shores and one of our readers got us detailed photographs of the upcoming motorcycles. While we’re yet to hear the official India launch details of the new Husqvarna 401 duo, the motorcycles continue to appear on the World Wide Web via the smartphone cameras. The 401 duo recently made appearance on video and they were accompanied by a couple of KTM Duke motorcycles in Pune, Maharashtra.

Check out the video clip below (via ThrustZone):

Both the motorcycles would be based on the KTM 390 Duke, and thus they will be built around a trellis frame and feature WP upside down forks upfront, a monoshock at the rear, and Bosch 9.11MB two-channel ABS system. Mechanical specifications would be shared between the two as well and the Husqvarna duo will use the 2017 KTM 390 Duke sourced 373.3cc single-cylinder, liquid cooled engine that’s tuned for 44.1 PS of power and 37 Nm of torque. 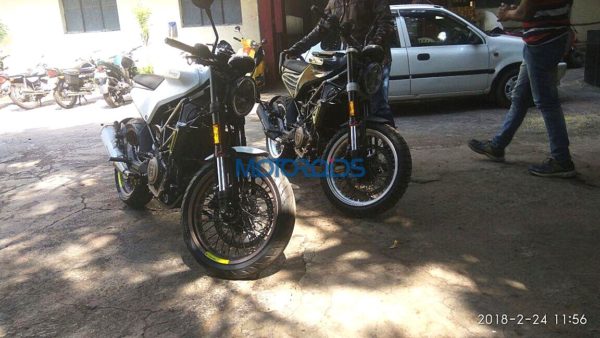