We’ve seen some crazy motorcycle modifications in the recent past and this particular KTM 200 Duke from Indonesia is one of the best that we’ve come across. The Austrian pocket-rocket sheds its modern, naked roadster look for a retro-styled design (something like the Yamaha XSR700) and it looks absolutely stunning in its new form. The video of this modified KTM 200 Duke was shared by YouTuber Atenx Katros.

Here’s the video of one of the best KTM 200 Duke Modifications yet:

The motorcycle sheds all its stock body panels for custom, hand built units. Upfront, the modified version gets a round headlight followed by a retro-styled, dual-paint fuel tank. The new fuel tank is followed by a single-piece saddle which replaces the split-seat unit while behind that is a compact tail light and a tall-set rear fender. Other custom bits on this modified KTM 200 Duke include a new under-belly engine guard and radiator surrounds. 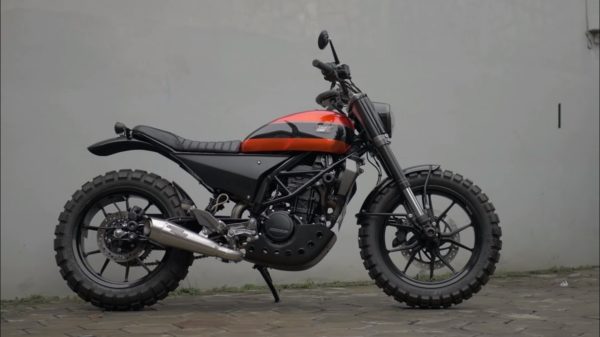 The motorcycle rides on knobby set of tyres which, along with the custom under-belly protector, add a pinch of off-roading prowess to the motorcycle. The trellis frame underwent some chopping to accommodate the new styling and body panels. The motorcycle also drops its stock exhaust, for an aftermarket unit. 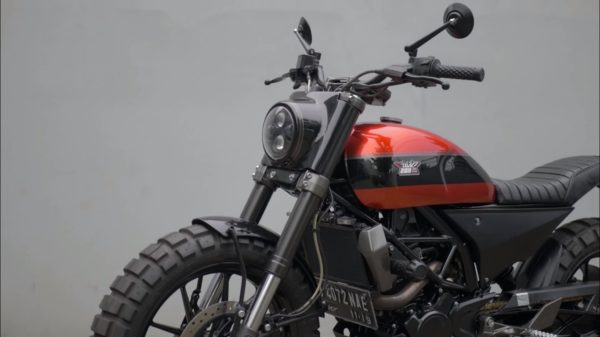 Any updates to the mechanical specifications were not mentioned in the video and thus we’d assume that the motorcycle continues to feature the stock engine. The KTM 200 Duke uses a 199.5cc single cylinder, liquid cooled engine that is tuned to deliver 25 PS of power at 10,000 rpm and 19.2 Nm of torque at 8,000 clicks. The engine comes mated to a six-speed transmission.

Check out more images of the modified KTM 200 Duke below: