KTM recently launched its all new 2017 KTM Duke range in India. The range was joined by the new 2017 250 Duke which came as bit of a surprise. We recently visited Bajaj’s Chakan plant to test the new 250 Duke along with its smaller 200cc sibling. 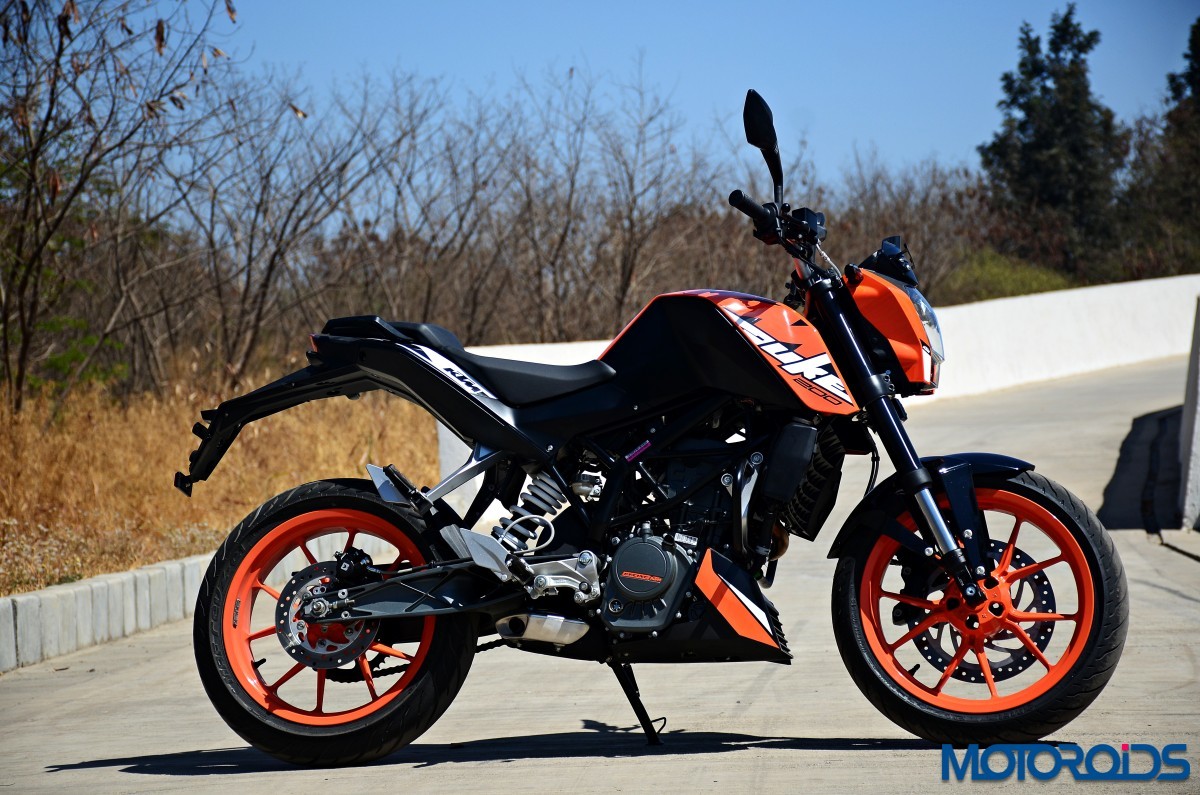 The 2017 KTM 200 Duke gets minimal updates as compared to the entire model range. The only major update versus the outgoing model is the compliance with the BS-IV emission norms. On the upside though, KTM continues to use the underbelly exhaust which helps retain the clean, characteristic, hooligan look of the motorcycle. We spent a few laps with the machine at Bajaj’s test track in Chakan and here are our first impressions of the 2017 model. 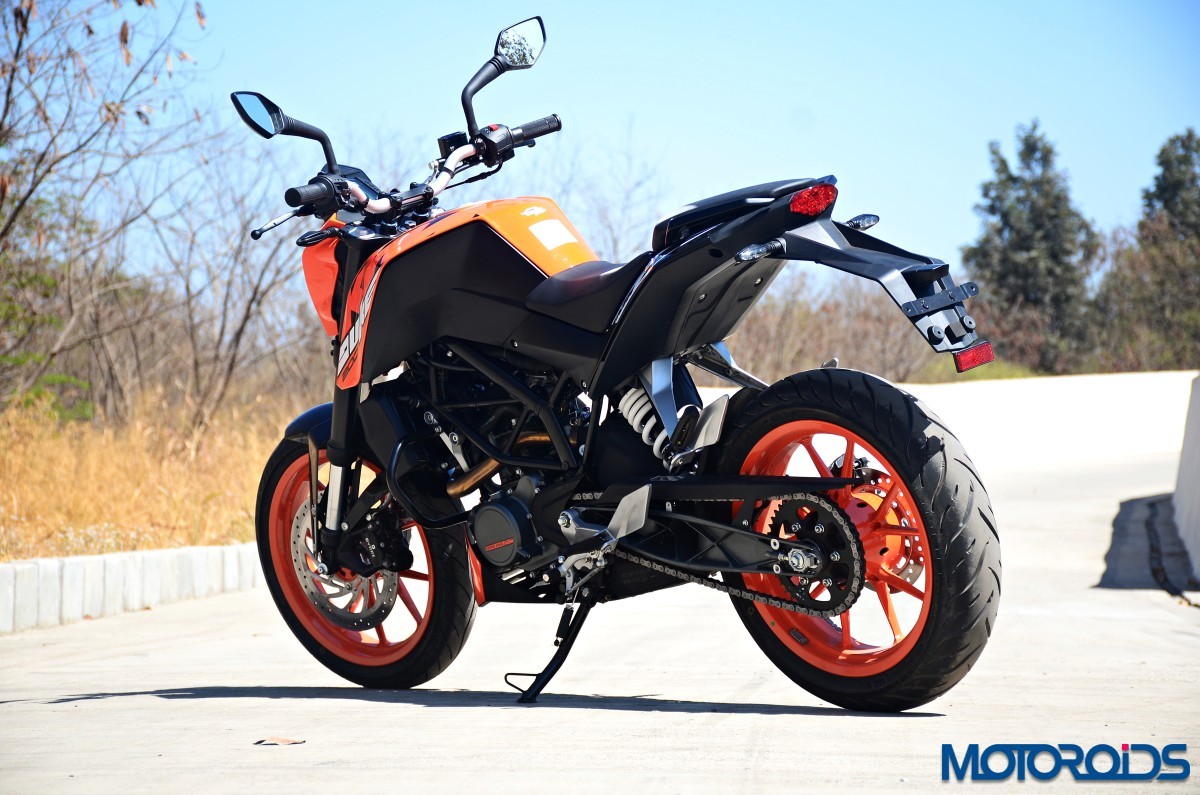 As aforementioned, the 2017 200 Duke gets the least number of upgrades. So even in its latest iteration, the entry-level model from KTM’s portfolio in the Indian market continues to use the same body panels as the outgoing BS-III variant. It misses out on the bolted sub-frame which is seen on the 2017 Duke Series and this one continues to use a welded unit. This has primarily happened to keep the costs low and offer the motorcycle at the same competitive price as the outgoing model. So despite the upgrades to comply with the new emission norms and a few visual tweaks, KTM continues to offer the 200 Duke at INR 1.43 lakh (ex-showroom). For anything above that, you have the new 250 Duke which costs INR 1.73 lakh (ex-showroom) and offers to the buyers an option of having the all-new design and a relatively powerful engine with a slipper clutch for a highly competitive price tag. 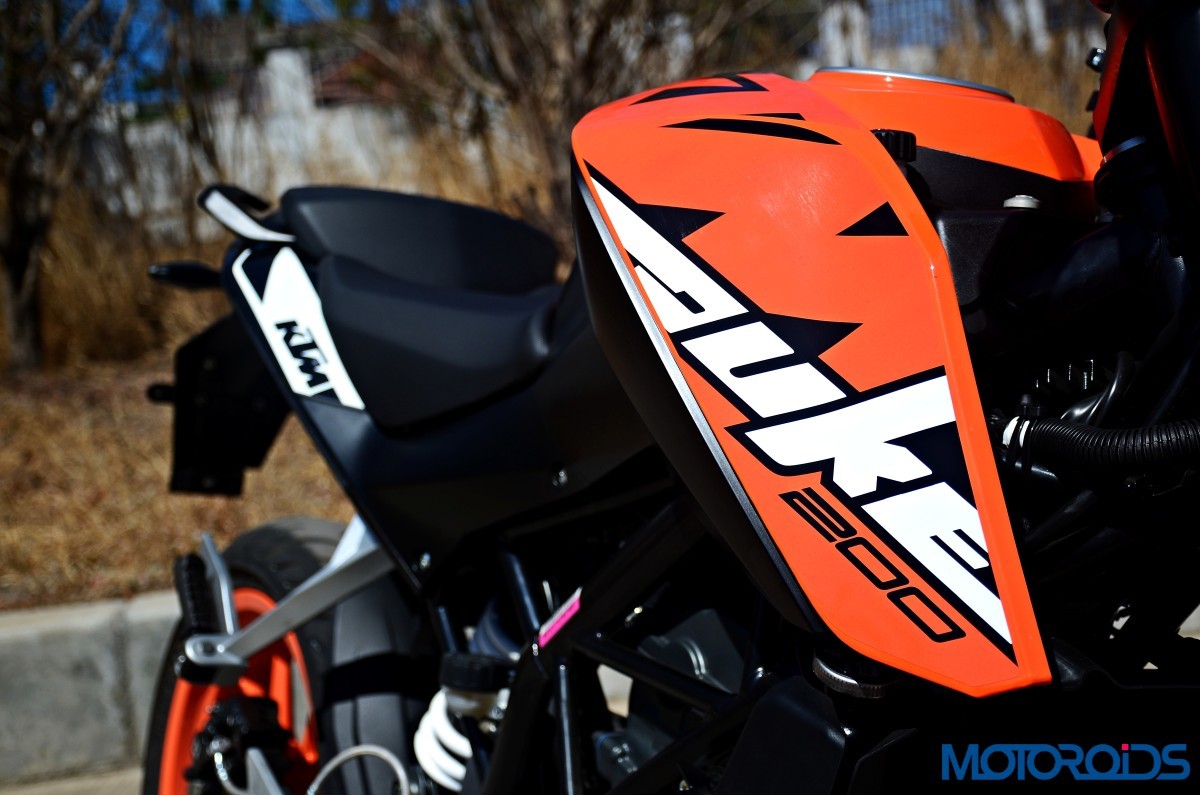 Visually, the upgrade list includes new set of graphics which are funkier than before and a pair of orange painted rims as against the previous version’s black alloys. The motorcycle is still available in three colour options – Orange, Black and White. You can spot the new graphics on the headlight mask, the fuel tank, the rear panel under the pillion seat and on the engine underbelly panel. The paint itself, as is the case with the entire 2017 KTM range is improved – it’s more resistant to UV radiation, less prone to fading and retains its sheen for longer.

Unlike its siblings, the 200 Duke continues to use the silver coloured handlebar but the mounts are now black to add to the visuals. How does it look? I personally found it a little too contrasting and would’ve preferred a black handlebar that may have enhanced the motorcycle’s devilish charm. For those who might want a blacked out handlebar like the 250, a spray can or an aftermarket wrap is an option. Apart from these, there aren’t any changes to the visuals or the dimensions but with the added parts for the BS-IV compliance, the motorcycle now tips the weighing scale about five kilos heavier than the outgoing model. 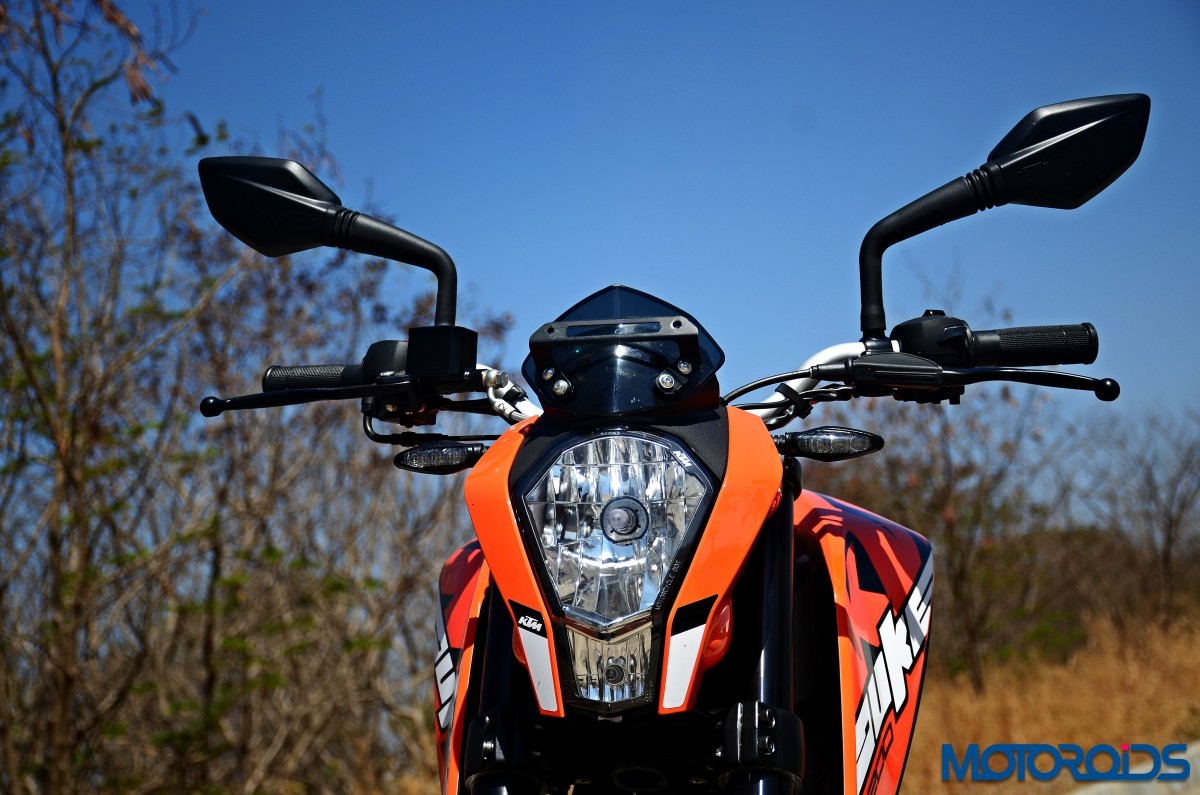 The new graphics give the motorcycle a refreshed look 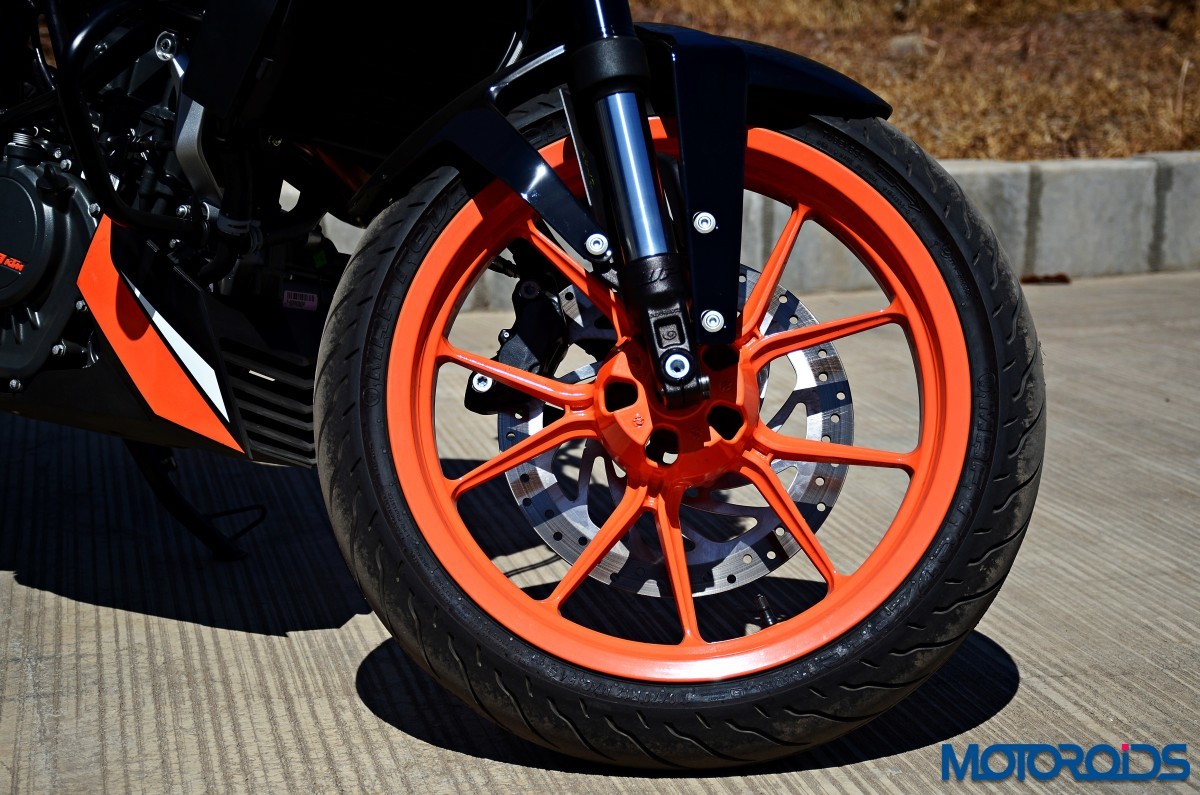 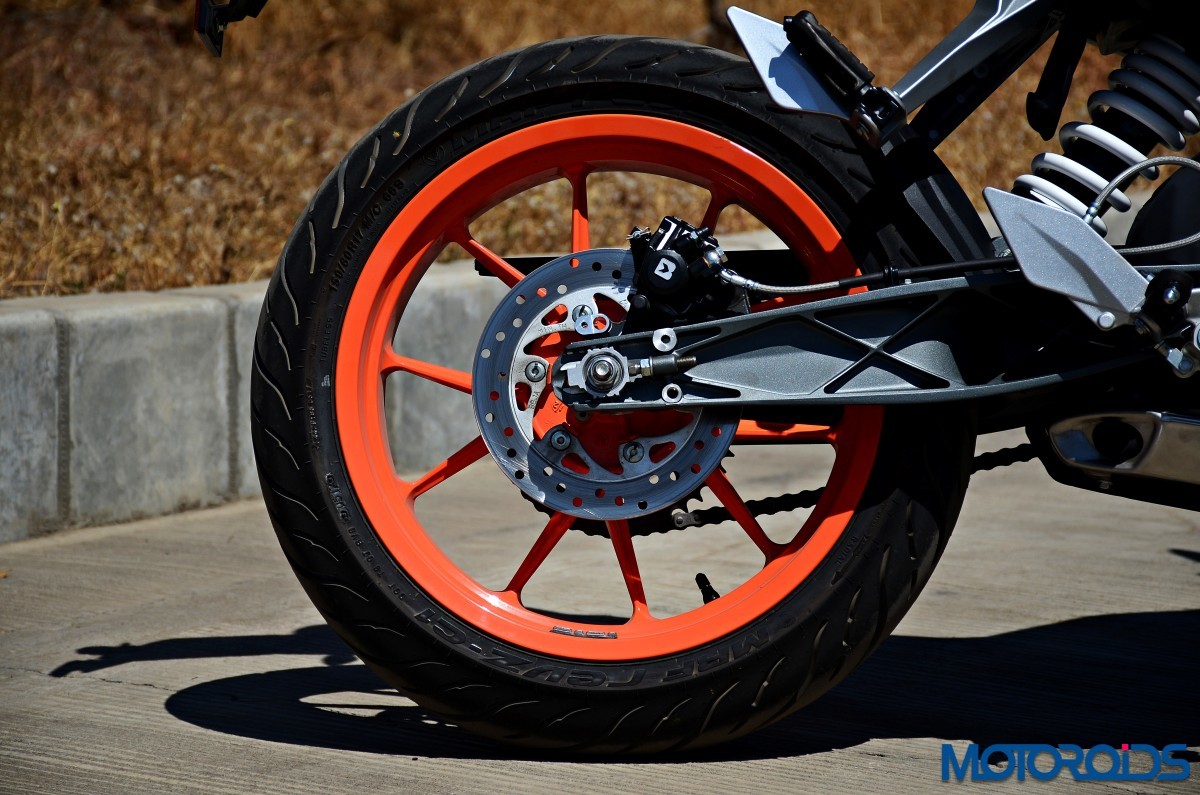 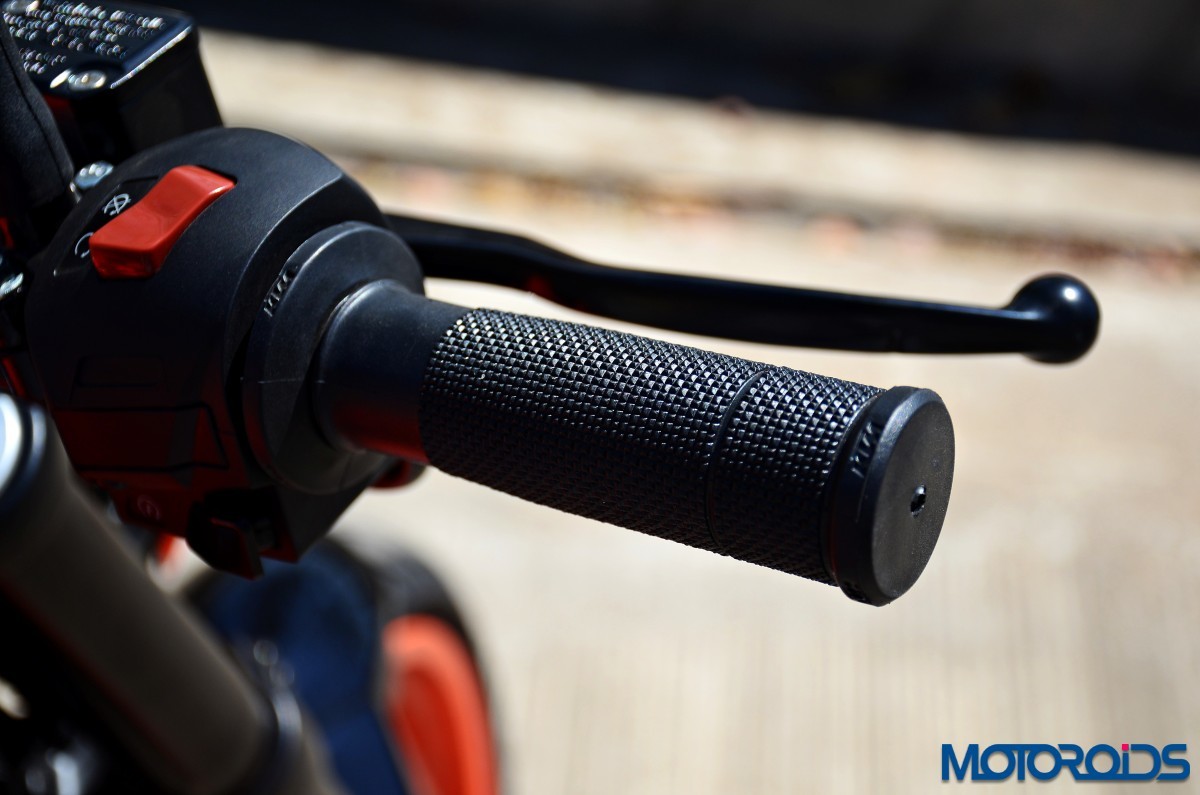 The handlebar grips are carried forward from the previous model. This one still doesn’t get bar-end weights 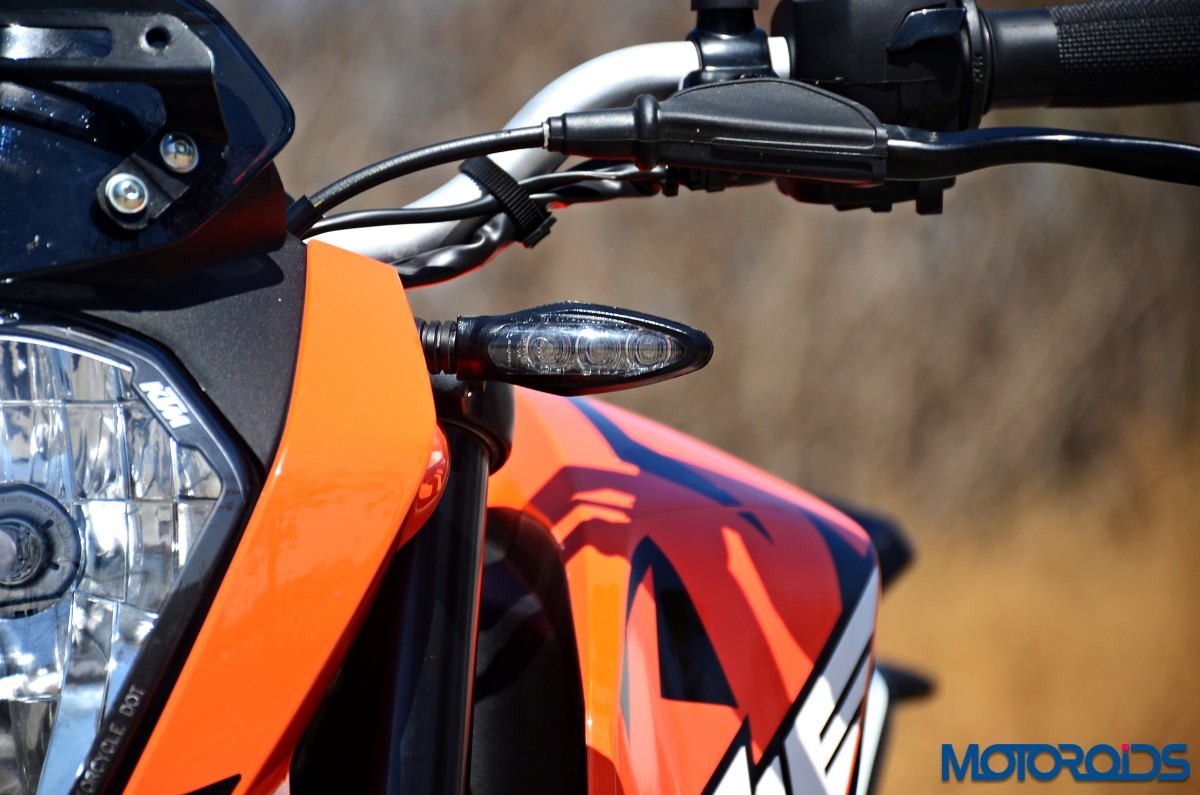 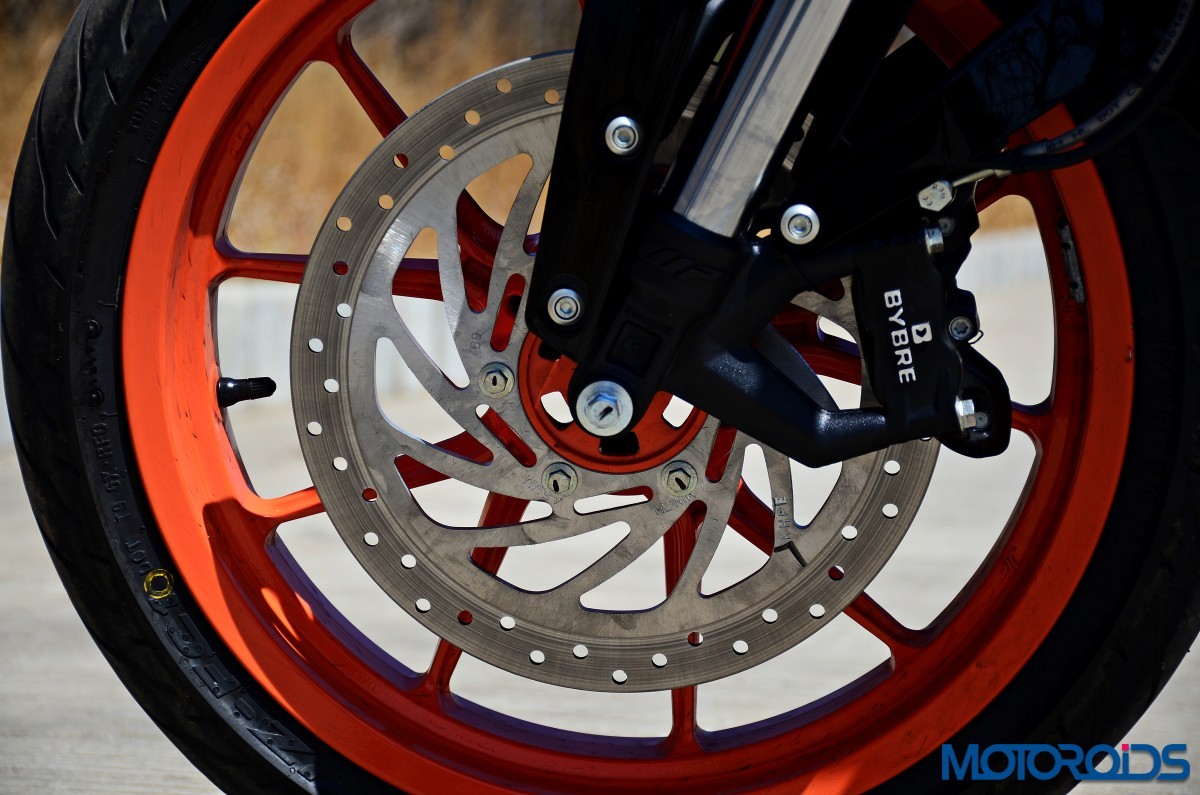 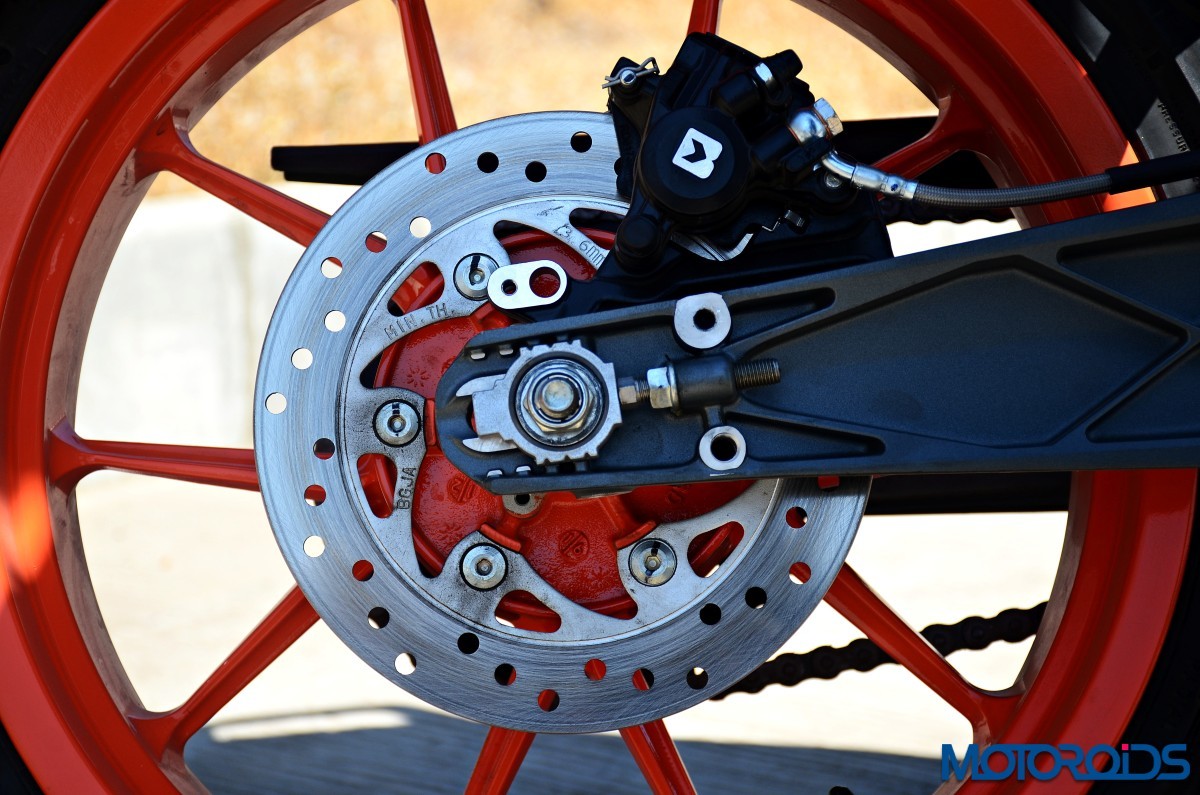 Bybre sourced discs are fairly potent. Although they still miss ABS even as an option 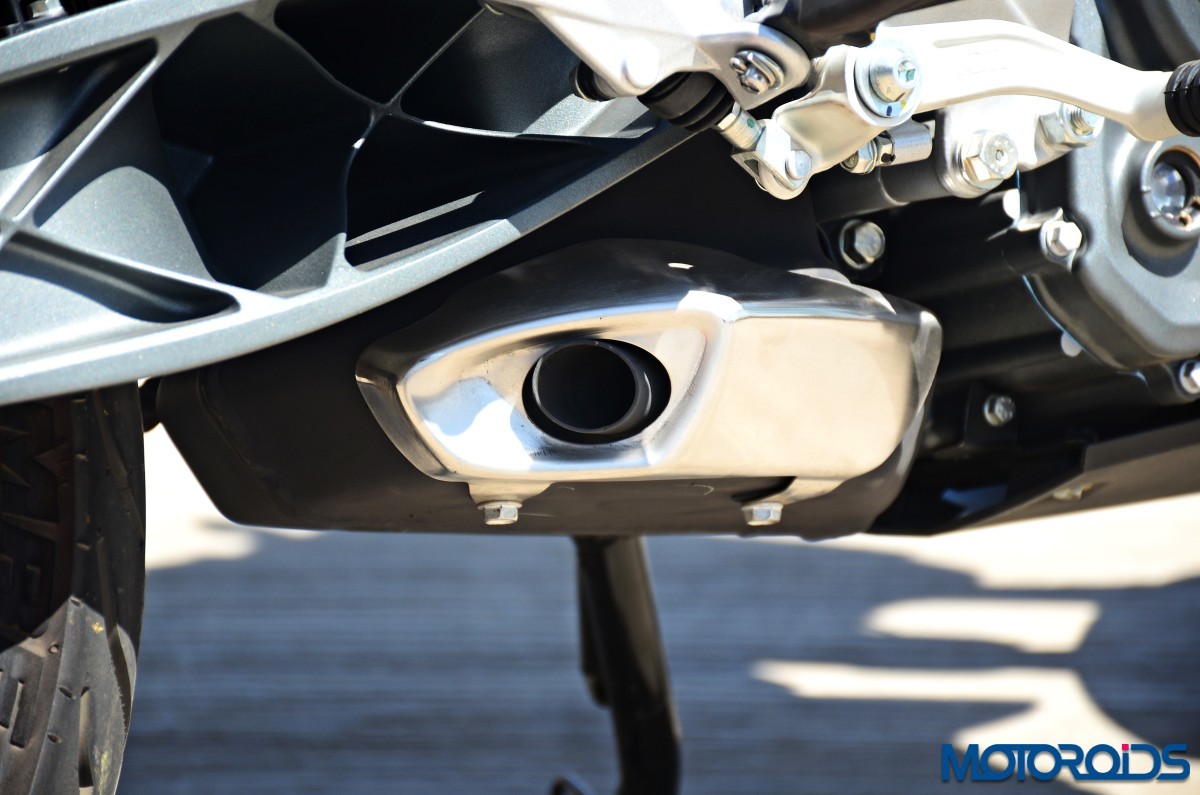 The underbelly exhaust is retained 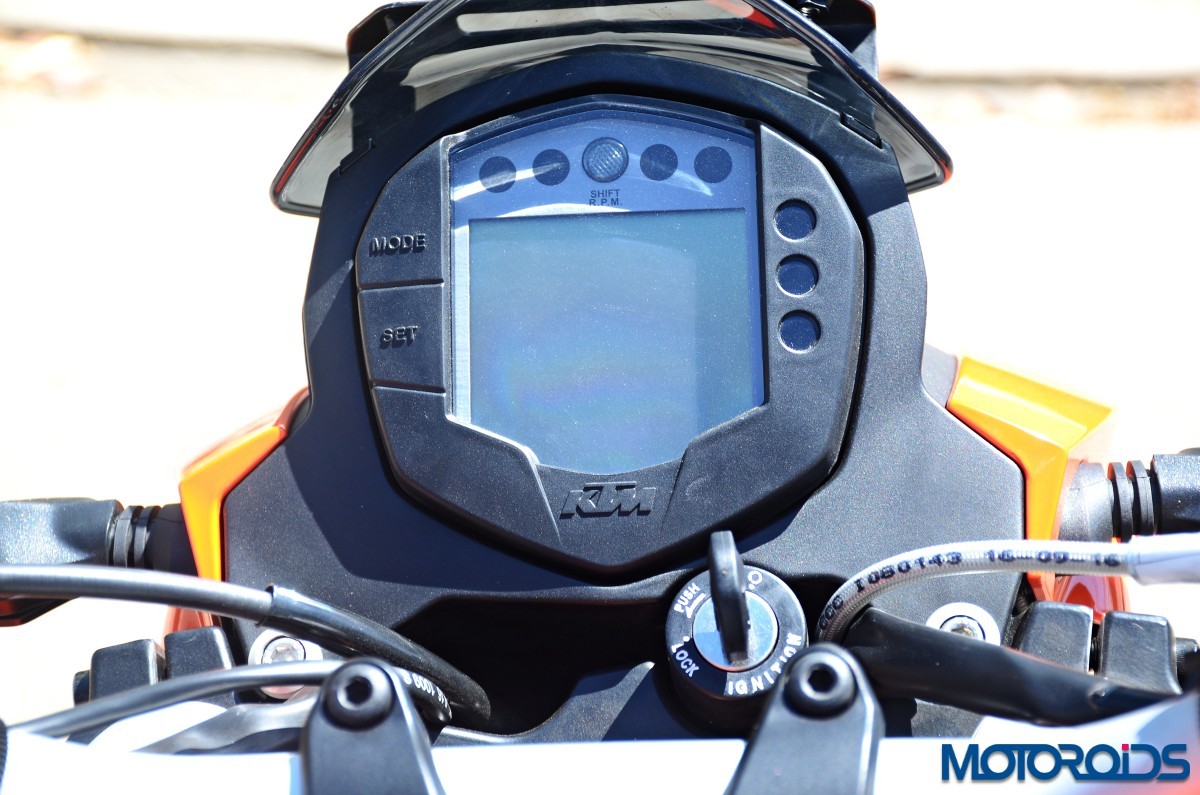 The dimensions, as aforementioned, remain unaltered and the 2017 200 Duke continues to use the same hardware as the outgoing model. There aren’t many changes to the mechanicals either and KTM has managed to achieve the BS-IV compliance without compromising on the performance. So the streetfighter continues to deliver 25 PS of power at 10,000 rpm and 19.2 Nm of torque at 8,000 clicks from its 200cc liquid cooled single cylinder engine. 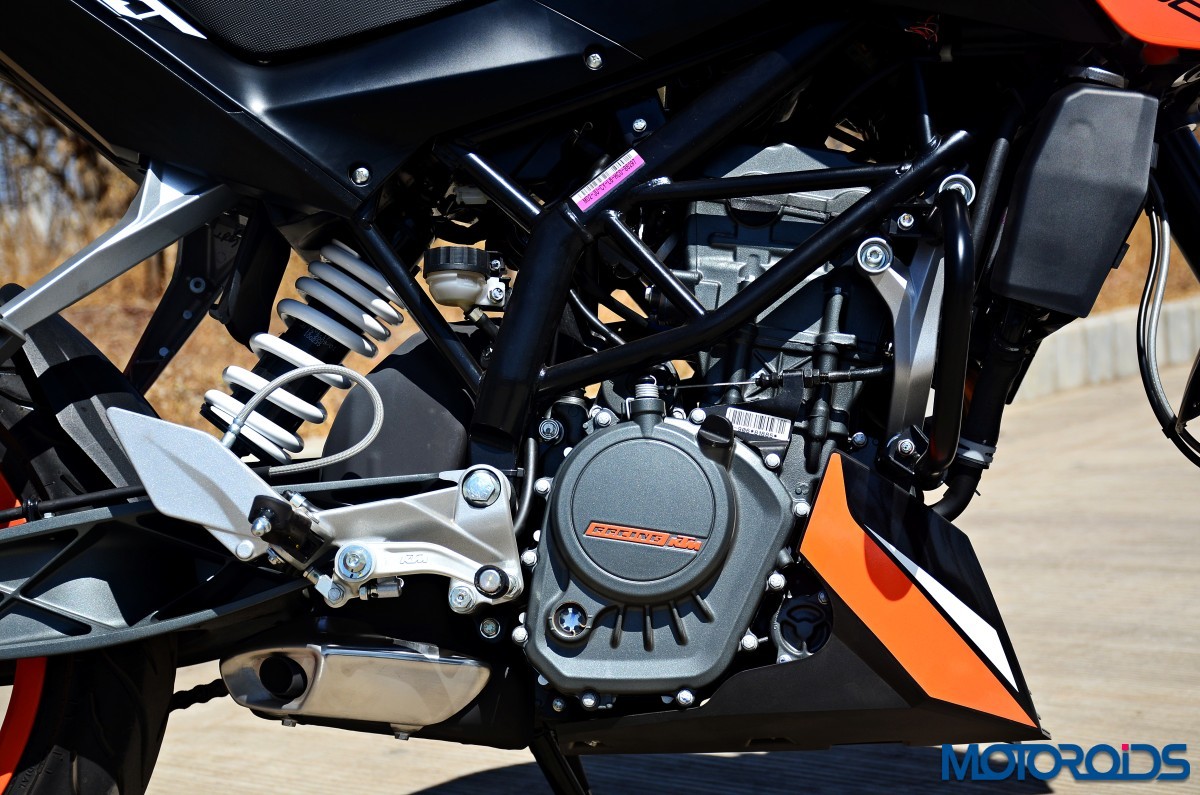 Can you feel those added five kilos? It’s not overpowering but it’s still noticeable. Moreover, the motorcycle feels marginally slow on the top end. The engine is still the revv friendly unit but reaching redline in top gear isn’t as easy as the one I have in my garage. So while the 2012 KTM 200 Duke back in my garage easily reaches its top speed of 136 kph at the rev limiter with very few efforts, this one took a while even to reach the 130 kph mark, with a few revs remaining though. Similar to the previous model, you’d have most fun above 7,000 rotations with peak torque kicking in at 8,000 revs. There’s no slipper clutch here either but a simple blip of throttle while downshifting would plaster a smile across a face the good old way. 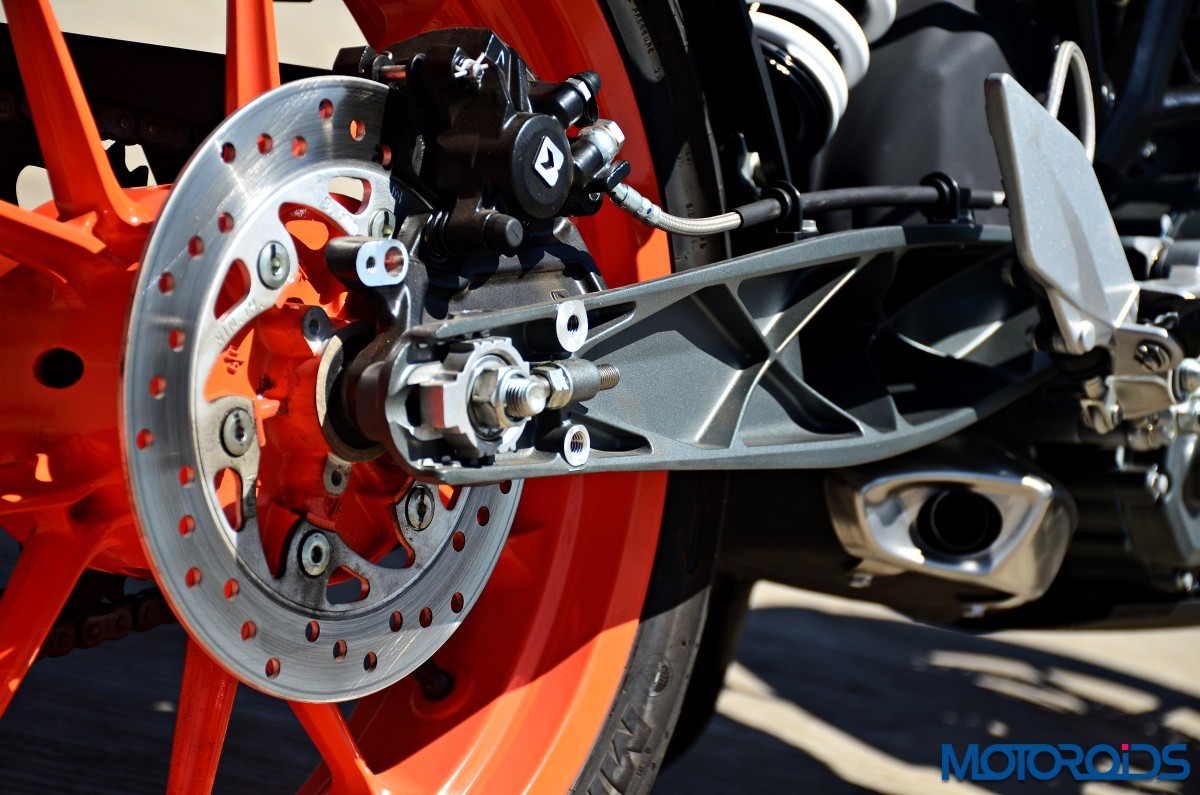 It’s still got the razor sharp handling characteristics as before. The new MRF Revz-FC1 and Revz-C1 offer pretty firm grip around the corners, giving utmost confidence to take the wide left hander after the longest straight, right before the pits on Bajaj’s test track at pretty solid speeds. Braking too remains identical to the outgoing model and lacks the ABS’s safety net owing primarily to the cost and pricing constraints. The Bybre sourced brakes are quite potent. The second longest stretch on Bajaj’s Chakan plant goes slightly downhill and is followed by a banked left hander which requires solid speed shedding before you lean into the corner and the 200 Duke does the job fairly easily. The suspension remains slightly on the stiffer side which comes handy around the track. 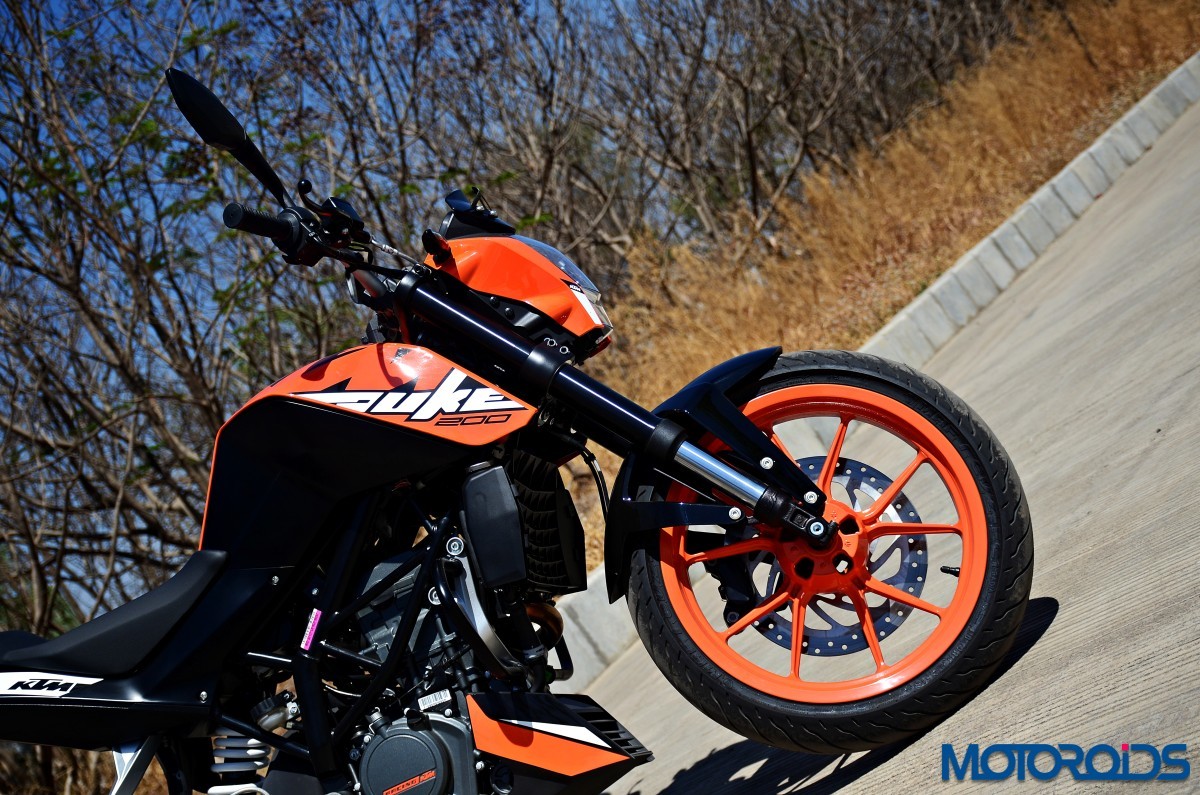 Hit the brakes, go down two cogs, enter the banked left hander, power out on the longest stretch of the track and let the symphony of that growly exhaust fill the air – that’s what I did during the free ride and came back with a smile on my face. It’s still a proper hooligan, a maniac on the streets, just a bit more eco-friendly now. While the new Duke retains its crazy character and that revvy engine that screams its way to the redline, the top speed with the added weight and the slightly strangulated exhaust is down by a couple of km/h. For a machine which is designed for city riding, though, there’s nothing to complain about. If you want more performance, fresh new styling and a more comfortable saddle, we’d recommend checking out the new 250 Duke which retails at a slight premium over the 200.