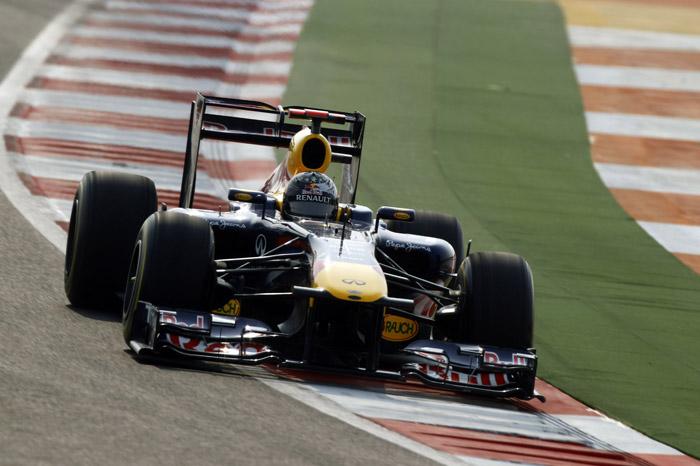 Sebastian Vettel bags his 11th victory of the season at the Buddh International Circuit.

Team Red Bull driver’s latest win was devoid of much drama.Vettel appeared free to pull away clearly from the start itself.

But his team-mate Mark Webber saw an attack by Button’s McLaren and Alonso’s Ferrari at the very start. Vettel managed a good four to five second lead for most of the distance and led every lap of the Indian GP. This race saw one of his perfect performances with the fastest lap time of the race as well. Commendable we would say.

Button was quick to climb to second at the very first corner, as Alonso was seen uncomfortable under braking and ran wide, letting Webber keep the third position. The Australian driver was seen making a few bold moves on Button over the initial laps, before the McLaren managed to successfully dodge him and head off for a good second place.

Lewis Hamilton and Felipe Massa seemed to be in love with troubles as their affair with a tumultuous season continued with yet another collision between the two.They collided as Hamilton took the inside at Turn 5 – with the stewards deciding it was Massa who was at fault as he left insufficient room and rewarded the Brazilian with a drive-through penalty. Massa later had to call his race off as he totaled his car’s suspension on a kerb, very much similar to what he had managed in qualifying, while Hamilton recovered from ninth to seventh place after getting a new front wing for his car. Lewis finished behind the pack Mercedes cars led by Schumacher who in turn was shadowing Nico Rosberg until Schumacher overtook him for a fifth place. Mark Webber meanwhile, lost third place to Alonso at the final stops as being the first of the frontrunners to change to the hard compound Pirellis robbed him off his podium.

Toro Rosso looked all set to grab a few points until Sebastien Buemi had to unfortunately pull over with a cloud of smoke emerging from his car. Jaime Alguersuari finished eighth, ahead of Adrian Sutil in the leading Force India, and Sergio Perez.

First a slight kiss between the two Williams sent Rubens Barrichello into Kamui Kobayashi’s Sauber, which then rejoined in front of Timo Glock. Among quite a few other brushes around the initial lap, Jarno Trulli suffered a puncture after his Lotus was punted into a spin by a HRT car. Indian driver Narain Karthikeyan managed a 17th place ahead of the second HRT-Cosworth car and Trulli’s Lotus-Renault respectively.

One of the most memorable moments of the day was cricket maestro Sachin Tendulkar waving the chequered flag as Vettel zoomed past the finish line.

Not classified/retirements: Driver Team On lap