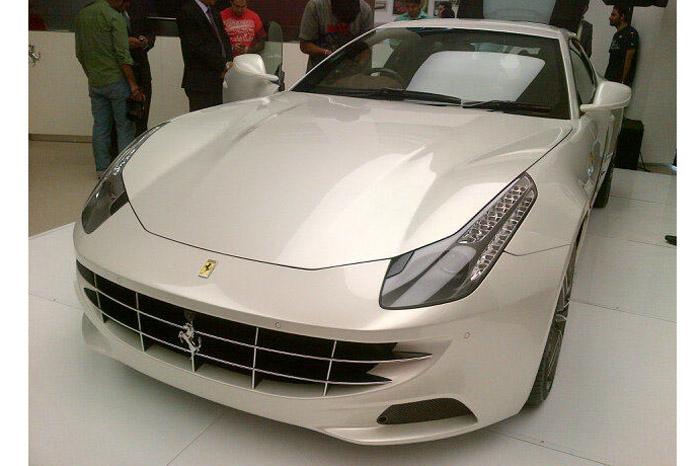 As informed by us on 25th October this year, Ferrari today launched the FF model in India. The FF is a special Ferrari as this is the first four-wheel-drive model to wear the prancing horse badges. The supercar sports a V12 engine mounted in front and this four-seater GT replaces the 612 Scaglieitti two-plus-two coupe globally. The car’s “all-roads, all-weathers” character should bring new customers to the brand.

The car has been christened as the FF for it is a four seats and four-wheel-drive. As with the many Ferrari cars including the 612, the car is designed by Pininfarina with the direction of Ferrari’s own chief designer, Flavio Manzoni. The first of its kind Ferrari has an all new all-independent suspension that incorporates the latest-generation magnetically adjustable dampers. The braking is some serious stuff in form of carbon ceramic disc brakes from Brembo.

The four-wheel-drive mechanism has been claimed to be around 50 per cent lighter than similar set-ups and helps with sustaining the rear weight bias that is typical of  V12 Ferraris of this generation. Called 4RM (‘Ruote Motrici’),  uses the car’s electronic systems to direct torque to the front wheels when it senses need for traction in slippery conditions. But the system otherwise usually keeps the car in desirable rear-wheel-drive state. This 4WD system is unique to Ferraris.

This new Ferrari seems to be more practical than the Ferraris we generally get to see but the Italian sports car manufacturer is quick to dismiss this belief. The fact that the it has given FF a newly developed 6.25-litre V12 with 22 per cent more power (than 612) and mated to a seven-speed double-clutch gearbox depicts that this is no ‘soft’ Ferrari.

The FF’s  boot provides a sufficient 450 litres of space or 800 litres with the rear seats folded. Ferrari has priced the FF at Rs 3.42 crore (ex-showroom, Delhi). With every new international model being launched in India, our market sure seems to be coming of age.