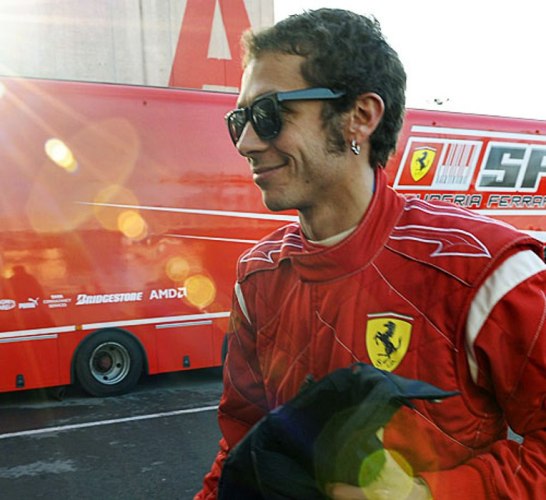 Valentino Rossi has (once again!) completed a two day test with the Ferrari F1 team. The motorcycle racing legend drove a 2008 chassis Ferrari F1 car running GP2 specification tyres on Wdnesday and Thursday at the Circuit de Catalunya in Barcelona, Spain. The nine time MotoGP World Champion reportedly clocked a time of 1(m).21.900(s) during Wednesday’s test on intermediate tyres under wet conditions. In 2008, Kimi Raikkonen had claimed pole position at the same track with a lap timing of 1(m).21.813(s). On Thursday as the track dried out Rossi completed the test running on slick tyres. This time he showcased his car control skills by setting a lap time which was faster than the one set during the 2009 Spanish Grand Prix!!  No wonder Ferrari keeps on inviting him for test sessions. It not only turns out to be a good PR exercise but the time sheets are also highly impressive.

Speaking to the media after completing his test on Thursday, Rossi said that the team kept the last three quarters of an hour to try a time attack with little petrol and fresh tyres. Rossi commented that he would have given anything for such a lap time. When aksed to compare his latest test with the 2008 one which was in Mugello, Rossi said it required more effort in Mugello while Catalunya was more fun because it’s a little bit easier. He further commented that the Catalunya track is really wonderful, with both motorbikes and cars, althugh the turn 10 is a bit tight and you brake very late.

Every time Rossi tests a Ferrari car, rumors surface about his likelihood of switching over to F1 after ending his career in MotoGP. This time too it was no different. When questioned by repoerters about his future F1plans, Rossi commented that by the time he comes to F1 age won’t be on his side. He said that there are wonderful drivers in F1 and he is fine in his own world which is bikes. He added that this F1 test is just a diversion, some fun and is grateful to everybody for the opportunity.