Volkswagen has been testing the upcoming 2015 Vento facelift for sometime now and the model has been spied on test near Pune again. As already stated by us, the facelifted model will be receiving only cosmetic changes and the mechanicals will be carried over from the current model. 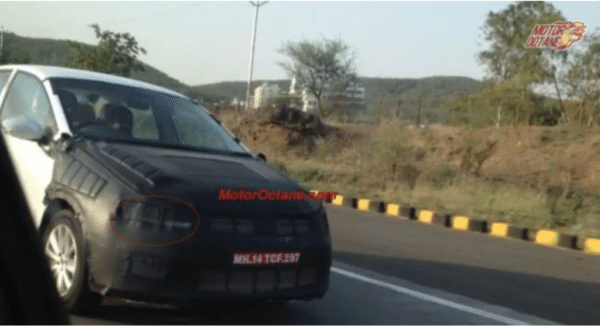 On the front, the 2015 Vento will feature a three slat chrome grille with the VW badge now housed in those slats. The current model has the badge touching the bonnet, whereas on the facelift, it doesn’t. The front bumper has been redesigned and now comes with a new set of foglights. These spy images reveal a LED DRL strip hiding behind the camoflauge. At the rear, Volkswagen has bestowed the car with a new bumper and a redesigned boot lid. Also, a horizontal strip runs across the boot.

On the interior front, VW may equip the car with some more bells and whistles compared to the outgoing model. According to reports, the car will come with a darker shade of beige interiors. As aforementioned, VW will continue to sell the Vento with the 1.2 liter TSi and 1.5 liter TDi engines connected to the DSG. Also on offer will be the 1.6 liter petrol engine churning out 105 PS which will be connected to a 5 speed manual transmission.

The 2015 Vento launch will take place around Diwali this year. Stay tuned to Motoroids for more dope on the 2015 Volkswagen Vento facelift launch and other details.