On the Indian roads, you might have seen traffic policemen riding their bikes without a helmet. The Union Transport and Highways Minister of India, Mr. Nitin Gadkari was in the city of Nagpur recently where he was caught riding a Vespa without a helmet. He was caught on camera entering RSS headquarters here on his scooter without wearing a helmet in violation of traffic rules. 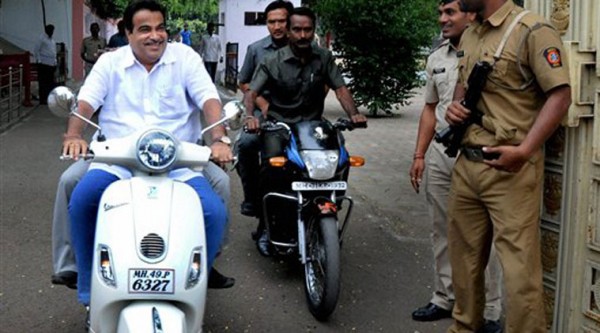 TV channels showed the Mr. Gadkari riding his white-coloured Vespa to the Sangh headquarters in Mahal area of the city to meet RSS chief Mohan Bhagwat amid efforts by the party to form government in Maharashtra. Also can be seen in the picture above are his bodyguards on another bike. When pointed out by journalists about him having violated the rules, Gadkari refused to comment and entered the premises with a man riding pillion.

Mr. Nitin Gadkari had recently announced huge increase in the fines for traffic violations like jumping a signal and DUI. With this incident, he might will be landing in some controversy.

What do you think about this ? Do let us know your thoughts by penning them down the comments section below.